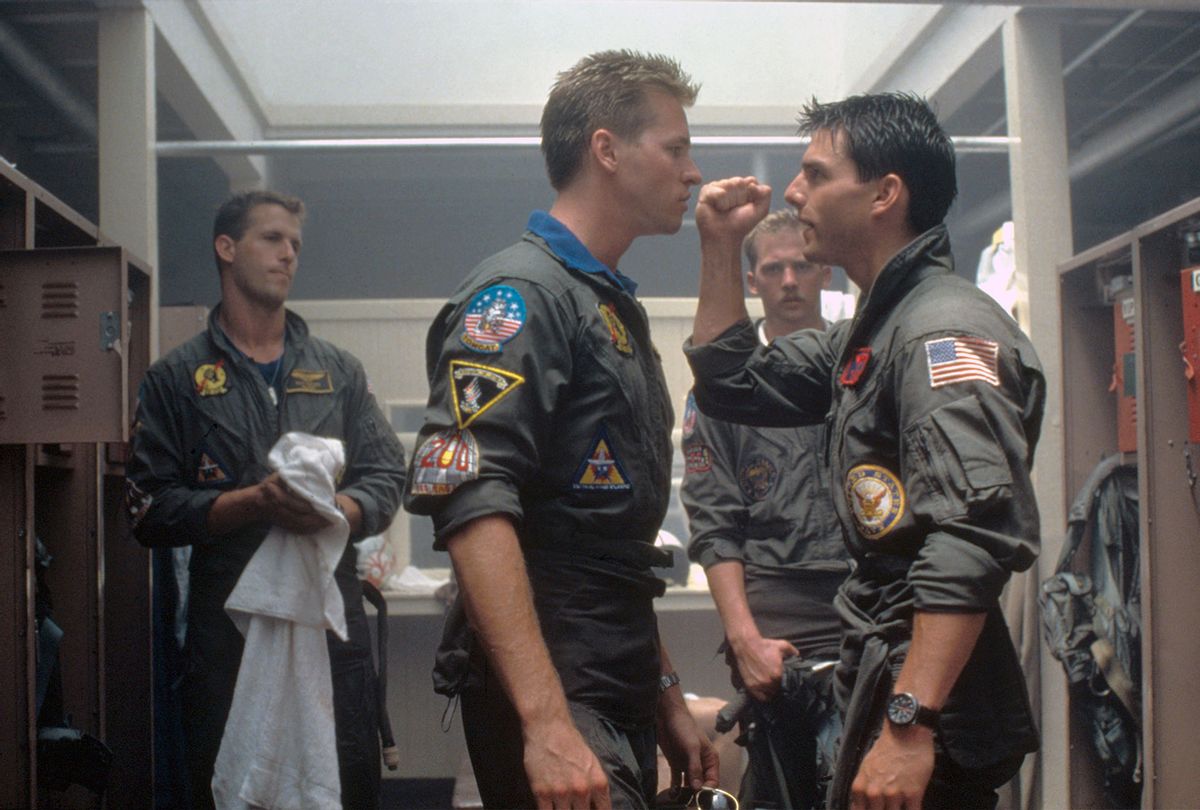 He's been Batman, Doc Holliday, and a real genius in 1985's "Real Genius," but Val Kilmer's most evocative onscreen portrait might be the one he's made of himself. In "Val," premiering on Amazon Prime on August 6, Kilmer takes audiences through the more than 40 years of footage he has shot over the course of his personal and professional life. It's a rare chance to see the sprawl of a respected actor's career before throat cancer complications forced him to devise workarounds. (The documentary is narrated by his son.)

For more on Kilmer, including his aversion to "Top Gun" and his strange connection to David Hasselhoff, keep reading.

1. Val Kilmer was the youngest person to ever be accepted into the Juilliard School's drama division.

Born December 31, 1959 in Los Angeles, California, to Eugene Kilmer and Gladys Swanette Ekstadt, Kilmer's grade school stage work developed his appetite for acting—something he was almost preternaturally good at. After attending the Hollywood Professional School, Kilmer enrolled in the prestigious Juilliard School. At 17, he was the youngest student to be accepted into the drama division at the time. (In 2003, actor Seth Numrich supplanted him when he was accepted by Juilliard at age 16.)

The Juilliard training resonated throughout his life. In 2020, Kilmer toldThe New York Times that the vocal exercises he was told to do there helped him communicate when his throat cancer began affecting his speech.

2. Val Kilmer turned down "The Outsiders" to do Broadway.

After graduating from Juilliard, Kilmer turned to the New York stage. He joined the production of the coming-of-age drama Slab Boys alongside Kevin Bacon and Sean Penn. In order to do the play, Kilmer said in his 2020 book, "I'm Your Huckleberry: A Memoir," that he turned down a part in director Francis Ford Coppola's 1983 film "The Outsiders," based on the 1967 S.E. Hinton novel of the same name. Kilmer said taking the third lead role was not his preference, but the opportunity for Broadway was too great to pass up. "Well, of course I minded, but of course I caved," he wrote of being billed behind Bacon and Penn.

3. Val Kilmer did an "ABC Afterschool Special" that didn't air after school.

Kilmer got a chance to display his dramatic chops early in a 1985 episode of the "ABC Afterschool Special," a daytime series that focused on hard-hitting social issues affecting teens of the day. Kilmer appeared with Michelle Pfeiffer in "One Too Many," which was about underage drinking. ABC actually aired the episode in primetime to reach a wider audience because they felt the topic was important enough to warrant more viewers. As high school boozehound Eric, Kilmer made an impression. The New York Times said that Kilmer was "bursting with ominous energy."

4. Val Kilmer got pranked on the set of "Top Secret!"

In 1984's "Top Secret!," Val Kilmer played crooner Nick Rivers, who became embroiled in an espionage plot in East Germany. The film was helmed by the "Airplane!" (1980) trio of Jerry Zucker, Jim Abrahams, and David Zucker. The men convinced Kilmer to learn to play the guitar over a four-month period; then, the first day on set, they told Kilmer to just "pretend" to play it. Actual ability wasn't needed.

As Tom "Iceman" Kazansky, the ultra-confident pilot in 1986's "Top Gun," Kilmer runs afoul of Pete "Maverick" Mitchell (Tom Cruise) during Naval training. While the movie was a huge hit and went on to become one of Kilmer's best-known roles, he didn't want to do it, fearing the movie had a "warmongering" message. ("Frankly, I don't like this," he told director Tony Scott.) But Scott was persistent, telling Kilmer it would be a chance to shine opposite rising star Cruise and against the backdrop of incredible aviation footage. Once he was shooting, Kilmer has said that he purposely antagonized both Cruise and co-star Anthony Edwards, remaining aloof off-camera so that the tension between them would be palpable onscreen.

Kilmer was not a fan of in-person auditions, preferring videotaped footage of himself for directors to evaluate. Hoping to score a role in 1987's Vietnam drama "Full Metal Jacket," Kilmer had a friend tape him wearing combat gear and firing live rounds. Kubrick went with Matthew Modine instead.

Stories abound of Kilmer's commitment to embody Jim Morrison in director Oliver Stone's 1991 film "The Doors," but it's hard to overestimate his devotion to the part. Kilmer rented a recording studio and made a tape that he challenged Stone and the original members of the Doors to put up against tapes of Morrison to see if they could tell the difference. According to Kilmer, they couldn't. After getting the role, Kilmer worked with Doors producer Paul Rothschild and appeared to be so uncannily like Morrison in his speech and mannerisms that Rothschild begged him to stop. He found it too unsettling.

Among Kilmer's most surprising projects was the 2008-2009 revival of the 1980s David Hasselhoff action series "Knight Rider." In the reboot, Mike Tracer (Justin Bruening), the son of Michael Knight (Hasselhoff), takes after his father's supercar tracks. Kilmer voiced K.I.T.T., the sentient vehicle Tracer drives. The actor was actually a replacement for Will Arnett, who recorded the role but had to withdraw because he was also doing voiceover work for GMC Truck commercials. K.I.T.T. was a Ford Mustang.

It's safe to say Mark Twain holds considerable sway over Val Kilmer. The actor has had a lifelong admiration for the writer born Samuel Clemens and currently runs a charity, TwainMania, focused on getting his books into the hands of more students. Kilmer's highest-profile Twain project was "Citizen Twain," a one-man stage show Kilmer wrote and directed in which he donned extensive prosthetics to play the author. The 90-minute show premiered in 2012 and eventually toured the country. In 2019, a filmed version of the play, renamed "Cinema Twain," was released with an introduction from Kilmer.

Various arcana from Kilmer's career as well as some of his art are stored at HelMel, a Hollywood art and office space that functions as both an artist's collaborative and a trip through Kilmer's past. Among the items: Doc Holliday socks, a Batman figure with a Mark Twin head, and coasters featuring Jim Morrison.