Some Americans were right all along on Afghanistan. Will their voices still be ignored?

America's establishment plunged into a disastrous war after 9/11. But other voices warned us what would happen 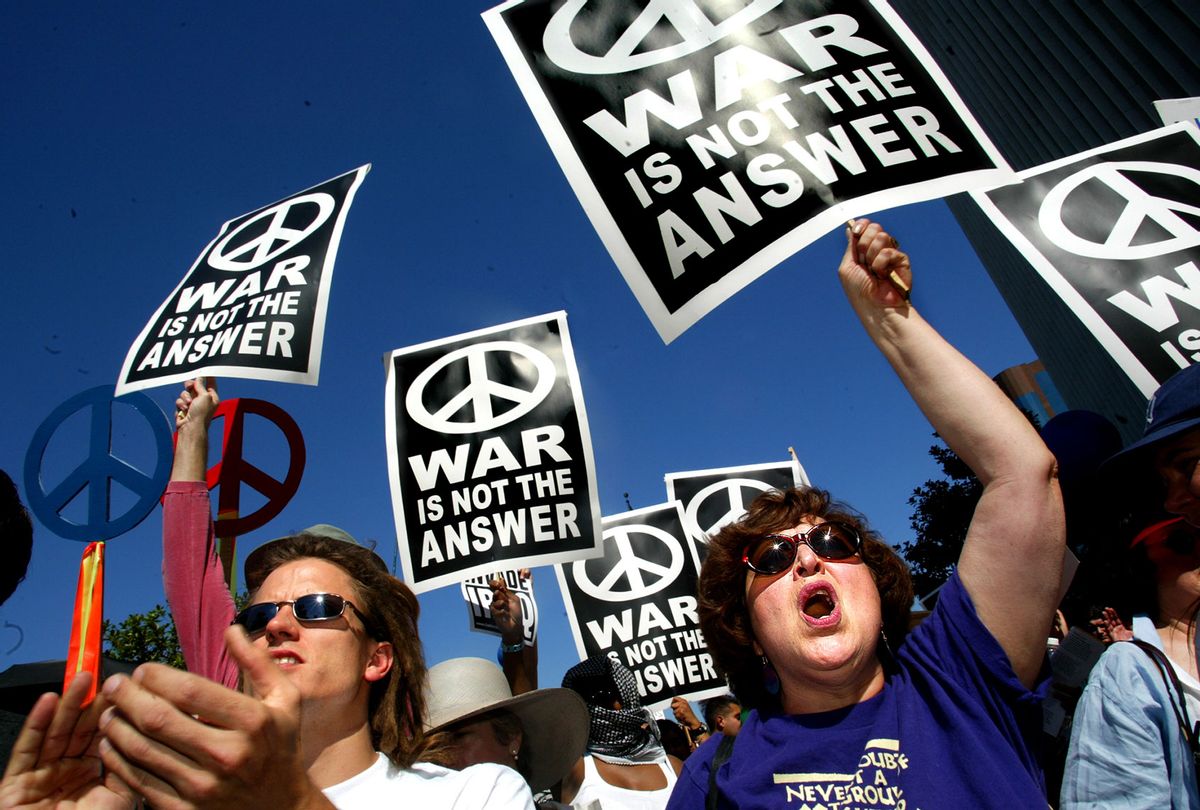 Anti-war protest at the Federal Building in Westwood on Sunday, October 6, 2002. Over 4,000 people gathered to voice their oppositon to a war against Iraq. (Carolyn Cole/Los Angeles Times via Getty Images)
--

America's corporate media are ringing with recriminations over the humiliating U.S. military defeat in Afghanistan. But very little of the criticism goes to the root of the problem, which was the original decision to militarily invade and occupy Afghanistan in the first place.

That decision set in motion a cycle of violence and chaos that no subsequent U.S. policy or military strategy could resolve over the next 20 years, in Afghanistan, Iraq or any of the other countries swept up in America's post-9/11 wars.

While Americans were reeling in shock at the images of airliners crashing into buildings on Sept. 11, 2001, Defense Secretary Donald Rumsfeld held a meeting in an intact part of the Pentagon. Undersecretary Stephen Cambone's notes from that meeting spell out how quickly and blindly U.S. officials prepared to plunge our nation into graveyards of empire in Afghanistan, Iraq and beyond.

So within hours of these horrific crimes in the United States, the central question senior U.S. officials were asking was not how to investigate them and hold the perpetrators accountable, but how to use this "Pearl Harbor" moment to justify wars, regime changes and militarism on a global scale.

Three days later, Congress passed a bill authorizing the president to use military force "against those nations, organizations, or persons he determines planned, authorized, committed, or aided the terrorist attacks that occurred on September 11, 2001, or harbored such organizations or persons. …"

In 2016, the Congressional Research Service reported that this Authorization for the Use of Military Force (AUMF) had been cited to justify 37 distinct military operations in 14 different countries and at sea. The vast majority of the people killed, maimed or displaced in these operations had nothing to do with the crimes of September 11. Successive administrations have repeatedly ignored the actual wording of the authorization, which only authorized the use of force against those involved in some way in the 9/11 attacks.

The only member of Congress who had the wisdom and courage to vote against the 2001 AUMF was Rep. Barbara Lee of Oakland, California. Lee compared it to the 1964 Gulf of Tonkin resolution and warned her colleagues that it would inevitably be used in the same expansive and illegitimate way. The final words of her floor speech echo presciently through the 20-year-long spiral of violence, chaos and war crimes it unleashed, "As we act, let us not become the evil we deplore."

In a meeting at Camp David that weekend, Deputy Defense Secretary Paul Wolfowitz argued forcefully for an attack on Iraq, even before Afghanistan. President George W. Bush insisted that Afghanistan must come first, but privately promised Defense Policy Board chairman Richard Perle that Iraq would be their next target.

In the days after September 11, the U.S. corporate media followed the Bush administration's lead, and the public heard only rare, isolated voices questioning whether war was the correct response to the crimes committed.

But former Nuremberg war crimes prosecutor Ben Ferencz spoke to NPR a week after 9/11, and he explained that attacking Afghanistan was not only unwise and dangerous, but was not a legitimate response to these crimes. NPR's Katy Clark struggled to understand what he was saying:

Clark: Do you think that the talk of retaliation is not a legitimate response to the death of 5,000 (sic) people?

Ferencz: It is never a legitimate response to punish people who are not responsible for the wrong done.

Clark: No one is saying we're going to punish those who are not responsible.

Ferencz: We must make a distinction between punishing the guilty and punishing others. If you simply retaliate en masse by bombing Afghanistan, let us say, or the Taliban, you will kill many people who don't believe in what has happened, who don't approve of what has happened.

Clark: So you are saying that you see no appropriate role for the military in this.

Ferencz: I wouldn't say there is no appropriate role, but the role should be consistent with our ideals. We shouldn't let them kill our principles at the same time they kill our people. And our principles are respect for the rule of law. Not charging in blindly and killing people because we are blinded by our tears and our rage.

The drumbeat of war pervaded the airwaves, twisting 9/11 into a powerful propaganda narrative to whip up the fear of terrorism and justify the march to war. But many Americans shared the reservations of Lee and Ferencz, understanding enough of their country's history to recognize that the 9/11 tragedy was being hijacked by the same military-industrial complex that produced the debacle in Vietnam and keeps reinventing itself generation after generation to support and profit from American wars, coups and militarism.

On Sept. 28, 2001, the Socialist Worker website published statements by 15 writers and activists under the heading, "Why we say no to war and hate." They included Noam Chomsky, the Revolutionary Association of the Women of Afghanistan and a co-author of this article (Medea Benjamin). Our statements took aim at the Bush administration's attacks on civil liberties at home and abroad, as well as its plans for war on Afghanistan.

The late academic and author Chalmers Johnson wrote that 9/11 was not an attack on the United States but "an attack on U.S. foreign policy." Edward Herman predicted "massive civilian casualties." Matt Rothschild, editor of The Progressive, wrote that, "For every innocent person Bush kills in this war, five or ten terrorists will arise." I (Medea) wrote that "a military response will only create more of the hatred against the U.S. that created this terrorism in the first place."

Our analysis was correct and our predictions were prescient. We humbly submit that the media and politicians should start listening to the voices of peace and sanity instead of to lying, delusional warmongers.

What leads to catastrophes like the U.S. war in Afghanistan is not the absence of convincing antiwar voices but the fact that our political and media systems routinely marginalize and ignore voices like those of Barbara Lee, Ben Ferencz and ourselves.

That is not because we are wrong and the belligerent voices they listen to are right. They marginalize us precisely because we are right and they are wrong, and because serious, rational debates over war, peace and military spending would jeopardize some of the most powerful and corrupt vested interests that dominate and control U.S. politics on a bipartisan basis.

Losing the Vietnam War was a serious reality check on the limits of U.S. military power. As the junior officers who fought in Vietnam rose through the ranks to become America's military leaders, they acted more cautiously and realistically for the next 20 years. But the end of the Cold War opened the door to an ambitious new generation of warmongers who were determined to capitalize on the U.S. post-Cold War "power dividend."

Madeleine Albright spoke for this emerging new breed of war hawks when she confronted Gen. Colin Powell in 1992 with her question, "What's the point of having this superb military you're always talking about if we can't use it?"

As secretary of state in Bill Clinton's second term, Albright engineered the first of a series of illegal U.S. invasions to carve out an independent Kosovo from the splintered remains of Yugoslavia. When U.K. Foreign Secretary Robin Cook told her his government was "having trouble with our lawyers" over the legality of the NATO war plan, Albright said they should just "get new lawyers."

In the 1990s, the neocons and liberal interventionists dismissed and marginalized the idea that non-military, non-coercive approaches can more effectively resolve foreign policy problems without the horrors of war or deadly sanctions. This bipartisan war lobby then exploited the 9/11 attacks to consolidate and expand its control of U.S. foreign policy.

But after spending trillions of dollars and killing millions of people, the abysmal record of U.S. war-making since World War II remains a tragic litany of failure and defeat, even on its own terms. The only wars the United States has won since 1945 have been limited wars to recover small neocolonial outposts in Grenada, Panama and Kuwait.

Every time the United States has expanded its military ambitions to attack or invade larger or more independent countries, the results have been universally catastrophic. So our country's absurd investment of 66% of discretionary federal spending in destructive weapons, and recruiting and training young Americans to use them, does not make us safer. It only encourages our leaders to unleash pointless violence and chaos on our neighbors around the world.

Most of our neighbors have grasped by now that these forces and the dysfunctional U.S. political system that keeps them at its disposal pose a serious threat to peace and to their own aspirations for democracy. Few people in other countries want any part of America's wars, or its revived Cold War against China and Russia. These trends are most pronounced among America's longtime allies in Europe and in its traditional "backyard" in Canada and Latin America.

On Oct. 19, 2001, Rumsfeld addressed B-2 bomber crews at Whiteman Air Force Base in Missouri as they prepared to take off across the world to inflict misdirected vengeance on the long-suffering people of Afghanistan. He told them, "We have two choices. Either we change the way we live, or we must change the way they live. We choose the latter. And you are the ones who will help achieve that goal."

Now that dropping more than 80,000 bombs and missiles on the people of Afghanistan over the course of 20 years has failed to change the way "they" live, apart from killing hundreds of thousands of them and destroying their homes, we must instead, as Rumsfeld said, change the way we live.

We should start by finally listening to Barbara Lee. First, we should pass her bill to repeal the two post-9/11 AUMFs that launched our 20-year fiasco in Afghanistan and other wars in Iraq, Syria, Libya, Somalia and Yemen.

Then we should  pass her bill to redirect $350 billion per year from the U.S. military budget (roughly a 50% cut) to "increase our diplomatic capacity and for domestic programs that will keep our Nation and our people safer."

Finally reining in America's out-of-control militarism would be a wise and appropriate response to its epic defeat in Afghanistan, before the same corrupt interests drag us into even more dangerous wars against more formidable enemies than the Taliban.