17 corn side dishes for peak summer flavor all year long 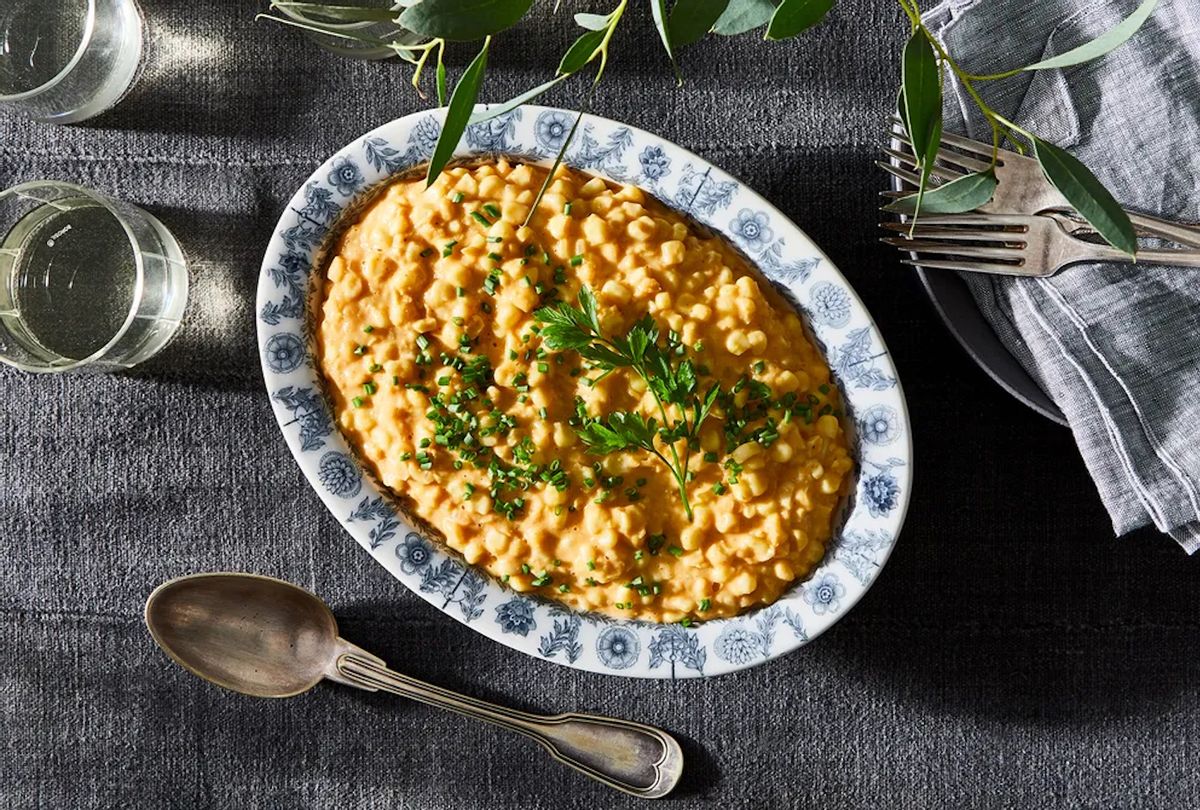 Even though corn on the cob doesn't peak until later in the summer, when it's good, it's excellent. Growing up, I ate boiled corn on the cob, lightly butter and salted, at least three times a week as a side dish for dinner during the summer. It got stuck in my teeth and stayed there for days no matter how much dental floss I went through, but it was worth it for that sweet, milky flavor and powerful crunch with each and every bite. Of course, boiled corn is great (especially when served alongside, say a 1 1/2-lb. whole lobster . . . not that I'm being picky or anything) but there are so many other incredible ways to enjoy corn on the cob, too.

For Thanksgiving, many families (mine included) enjoy scoop after scoop of corn pudding and slice after slice of cornbread. If you're in a part of the country that gets good corn on the cob during fall (let me know, because I'd like to move there please), we've got a fabulous method for roasting it in the oven as well as modern takes on classic recipes like corn casserole, corn fritters, and elote (Mexican street corn). And when you're missing corn come the dead of winter, we've got a few special recipes that make use of frozen corn kernels.

Our best corn side dishes

1. Effortless Oven-Roasted Corn on the Cob with Husks

The most popular methods for cooking corn on the cob are generally boiled in salted water or grilled over smoky coals. But the former can quickly lead to overcooked corn kernels, whereas the other method means frequent flare-ups. For an even easier and tastier method, try roasting the cobs in the oven for the best corn side dish recipe.

This side dish recipe for Thanksgiving is so, so much better than the canned version of creamed corn. And it only calls for five basic ingredients—corn on the cob (duh!), shallots, smoked paprika, butter, and an assortment of tender green herbs. To make the "cream" part of this corn side dish, fresh corn kernels cook in water or stock with a bit of butter. After a few minutes, it's blended together and then mixed with the remaining kernels.

Just like Grandma used to make (or at least recipe developer Cory Baldwin's grandmother), this fluffy, creamy side dish uses frozen corn, which means you can make this even when fresh corn isn't at its best (like during the peak holiday season for Thanksgiving). Ritz crackers are mixed into the casserole and sprinkled on top for even more crunch.

Kick up your fall harvest dinner with this spicy corn salad. It gets a few dashes of heat from Sriracha, crunch from red bell pepper, and creaminess from crumbled Cotija cheese. It has the flavors of elote, or Mexican street corn, in one convenient side dish.

This one-skillet corn dish originated in Louisiana, thought to originate from a combination of Native American food with French cuisine. To make it, sauté fresh sweet corn kernels with a bevy of spices, peppers and onions, and heavy cream for a quick and easy side dish.

Food Editor Emma Laperruque was inspired by Food52 co-founder Amanda Hesser's tomato salad when she developed this corn side dish for Thanksgiving. But instead of juicy heirlooms, she decided to switch things up and used fresh corn instead.

"In this cheesy, spicy spin on my classic base recipe, chopped, fresh jalapeños, cubes of full-fat cream cheese, and freshly shorn corn kernels stud a grainy, hardy crumb that's rounded out by slightly salty, tangy buttermilk," writes recipe developer Renae E. Wilson. Maybe it's exactly like the style you grew up with, or maybe it's something entirely different. Either way, give it a try for Thanksgiving this year!

We're all about repurposing leftovers into something entirely new and delicious. This recipe does that super well. It's made with pre-grilled corn on the cob, pineapple slices, and peach halves, which are mixed with olive oil and the remaining fruit juices, plus chile peppers and a few dashes of your favorite hot sauce.

This 20-minute corn sauté is about as simple as it gets. Over medium-high heat, cook fresh corn kernels, scallions, and mushrooms until they're caramelized and fully cooked through. Serve with kebabs or burgers during summer or roast turkey for Thanksgiving.

Follow this recipe to learn how to make grilled corn and then dress it up with an herby spread made from two sticks of butter and an entire cup of fresh basil leaves.

12. Corn Fritters with Cheddar and Scallions

Corn fritters can be simple and basic or they can be a little spicy and sassy. These fall somewhere in between, with their flavorful combination of sharp (and we mean SHARP!) cheddar cheese, scallions, and cilantro.

Highlight the beauty of perfect, uncooked corn kernels in this sweet side salad. There's plenty of crunch from the corn, cucumbers, and peppers, plus a tangy yogurt dressing that is truly cooling alongside roast turkey, mashed potatoes, and green bean casserole.

Not heading out east for vacation? You can still capture the flavor of Long Island's prime corn on the cob in this super easy salad recipe that's a bright spot during dinner.

16. Charred Corn and Avocado Salad with Lime, Chili, and Tomato

Capture summertime in a bowl no matter the time of year. A little bit of lime juice perks up fresh corn, cherry tomatoes, creamy avocado, and sautéed peppers and onions in this easy, breezy side dish.

Serve this as a side salad for a holiday meal or use it as a colorful taco topping. The majority of the cooking time is dedicated to brining and cooking dried black beans; assembling the beans with corn kernels, red bell peppers, jalapeño peppers, and herbs happens in a flash.