After 20 years, the Taliban are back in power. But for the defense industry, that massive failure was a big win 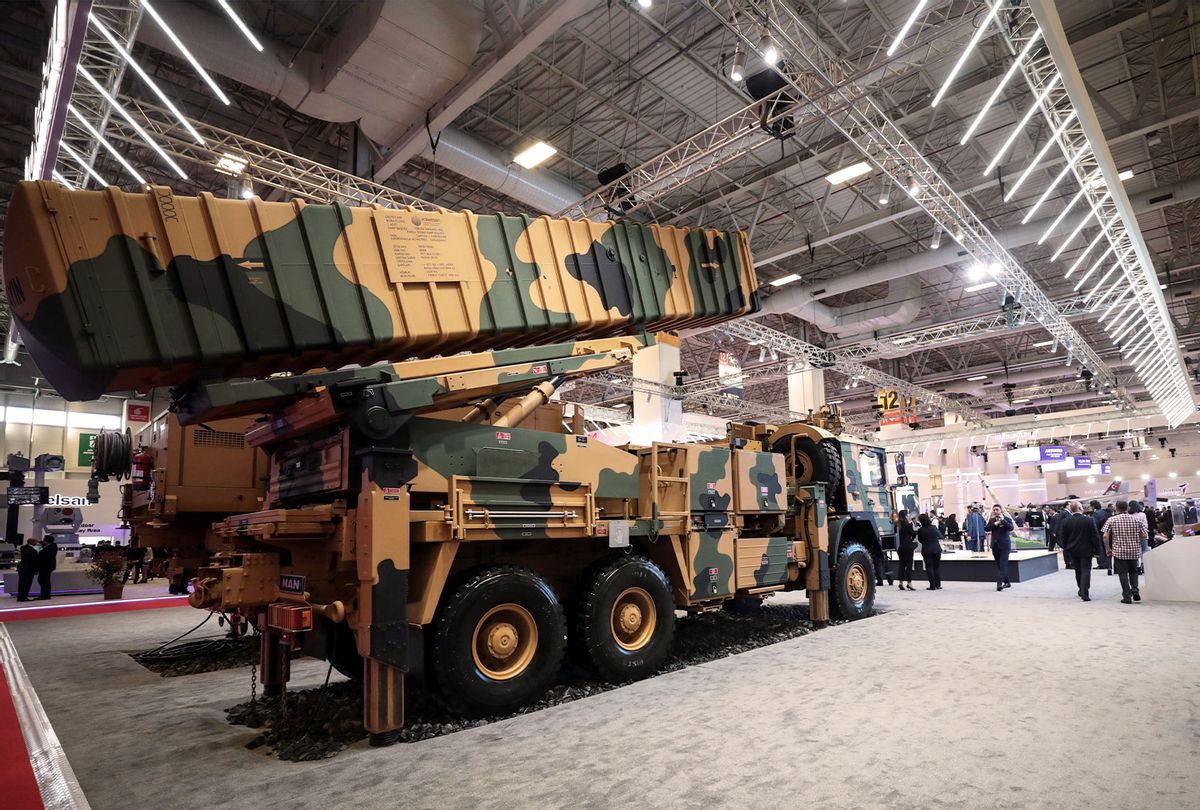 Descriptions of Afghanistan's takeover by the Taliban have been packed with histrionic language: "a stunning rout" (The Associated Press) accomplished with "breathtaking speed" (The New York Times); a "spectacular collapse" (The Washington Post); "a crisis that could have lasting humanitarian and national-security consequences" (The Wall Street Journal).

The news was accompanied by a sudden rush of hand-wringing over the fate that awaits the Afghan people. "The Taliban insists it has changed. Afghanistan's future hinges on whether that's true," read one headline in the Washington Post.

But over the last 20 years, the future and well-being of ordinary Afghans — continuously bombed, starved and displaced by all sides and all armies — have been buried under different headlines. It took a nationwide resurgence of the bearded, brutal, cruelly misogynistic Taliban — picture-perfect antagonists for American audiences — to wrench Afghan civilians from the bottom of the priority pile, as if life in Afghanistan before last weekend had been a rosy affair.

In addition to watching in horror as the Taliban made themselves comfortable in Kabul's presidential palace, much of this coverage bemoaned the war's tactical failures. It was viewed, in other words, not as a catastrophic decision to have been made in the first place but as a logistical embarrassment.

Yet, this meandering, ineffectual, deadly war — the longest in American history — was a grand victory for one behemoth sector of manufacturing that thrives upon tactical failures and stalemates: the military-industrial complex.

Mainstream coverage of Afghanistan this past week touched a bit on military spending but generally omitted the vast profits accumulated since 2001 by big guns like Lockheed Martin, General Dynamics and Raytheon, as well as hundreds of smaller and lesser-known defense contractors.

Instead, such reports framed the American occupation as a moral imperative. Ever since George W. Bush swaggered into what some call the Heart of Asia — mountainous, gorgeous, ever-antagonized — the invasion, unlike that of Iraq, has been seen as a flawed but justified battle against evil: the Taliban, al-Qaida and terrorism.

The initial poster boy for military action, of course, was Osama bin Laden. But when he escaped into Pakistan — on horseback, the story goes — a mere two months after the U.S. started dropping bombs, the war was repurposed as a "feminist mission … to liberate Afghan women from their burqas," as Arundhati Roy put it in 2002. When the Taliban were beaten out of governance, the mission changed again — this time to one of grueling, corruption-prone, glacially incremental reconstruction. The U.S. would build, Bush said at the time, "an Afghanistan that is free from this evil and is a better place to live." What this really meant, whether or not he knew it, was fresh billions — and steady billions — for the Pentagon, State Department, contractors, mercenaries and a host of Afghan warlords and politicians.

The war was ultimately a colossal financial operation with an unfathomable toll in taxpayer dollars and human lives. That it accomplished virtually nothing of political or civic durability only confirms this.

"Largely out of sight, our gargantuan military machine is also increasingly out of mind, especially when it comes to the ways in which it spends, and misspends, our money," Andrew Cockburn wrote in Harper's in 2019.

Indeed, the $2.26 trillion that the U.S. spent on Afghanistan is hardly a comprehensible number — its scale obscures the venality at play. But if we hone in on days and months, on individual multimillion-dollar contracts awarded to companies supplying explosives, helmets, boots and armed security guards, we can see what the spoils of war really look like.

One only needs to spend a few minutes perusing the Department of Defense's contracts page to get a sense of how much money U.S. taxpayers were allotting daily to the war as recently as July 30. So far this year, the Pentagon has given away $225.83 million in contacts for work exclusively intended for Afghanistan and another $498.08 million for work partly in Afghanistan. Unsurprisingly, these are small sums in comparison to earlier years, when military operations were thriving. In just August and September, 2015, the DOD signed away $672.95 million solely for America's "forever war."

Days selected at random show us where our money was going in Afghanistan, in lieu of strengthening our own schools, health care, infrastructure and social services:

On Dec. 31, 2014, DynCorp International, LLC was awarded $100.78 million to train police and army officers at the Afghanistan Ministry of Interior.

On July 3, 2019, AAR Defense Systems & Logistics received $209.96 million to train recruits for the Afghan Air Force, among other tasks.

"I don't think I could overstate that this was a system just basically designed for funneling money and wasting or losing equipment," said a U.S. veteran with Joint Command, which oversaw training of Afghan forces, in a wrenching interview with Michael Tracey last month.

The veteran's frustrating (and not at all uncommon) experiences testify to Andrew Cockburn's assertion that "if we understand that the [military industrial complex] exists purely to sustain itself and grow, it becomes easier to make sense of the corruption, mismanagement, and war, and understand why, despite warnings over allegedly looming threats, we remain in reality so poorly defended."

To publish tactical analyses by people like Defense Secretary Lloyd Austin, a former director of Raytheon, while ignoring the vast profits accumulated by that company from never-ending wars, symbolizes the ingrained failure of the mainstream press to scrutinize our political leaders in ways that matter. When Austin pressed President Biden to preserve a military presence in Afghanistan, for example, the New York Times reported it with no apparent irony.

Austin was just one of a sizable number of establishmentarian voices urging that the occupation be prolonged, in one form or another. Former Secretary Hillary Clinton warned of "huge consequences" if troops were to be withdrawn. Former Secretary Condoleezza Rice sagely recommended a sustained counterterrorism mission. Gen. Mark Milley, chairman of the Joint Chiefs of Staff, foresaw "some really dramatic, bad possible outcomes."

Jim Mattis, who took a short break as a director of General Dynamics to serve as Trump's defense secretary, warned that withdrawal from Afghanistan could leave the U.S. vulnerable to threats of terrorism. In the less than two years that Mattis served in Trump's cabinet, General Dynamics was awarded $277.66 million for work either fully or partly in Afghanistan.

When we lose sight of the bigger picture — of history, cycles, agendas and consequences — we can find ourselves seduced by the smaller picture: a bombing here, an atrocity there, a rifle-toting militant sitting behind an ornately carved presidential desk. We forget who attacked whom first. Who funded whom. Who profited. Who lied. In isolation, sensationalized increments capitalize upon our outrage, preserving axioms and insulating institutions.

In its editorial last week condemning the fall of Kabul, the New York Times solemnly referred to the 20-year occupation as "a story of mission creep and hubris but also of the enduring American faith in the values of freedom and democracy." The paper of record's editorial board dwelled on American soldiers lost, not Afghan civilians slaughtered. It reserved its rancor for the "militants" overrunning the region, not the foreign militaries that precipitated its bloody unraveling. It went so far as to lionize the U.S. military as a "logistical superpower" able to "move heaven and earth." The chaotic scenes of Afghans swarming an American military plane at the Kabul airport, the Times observed, "seemed to capture the moment more vividly than words: a symbol of America's military might, flying out of the country even as Afghans hung on against all hope."

Other influential newspapers also missed the point. The Washington Post questioned Biden's foreign policy credentials — not because of his instrumental support for the catastrophic invasion of Iraq, but because of his "cold" and "harsh" decision to pull out of Afghanistan. The Post worried that Biden's "callousness … will make it hard to gain allies in the nation's next conflict" (my own, disbelieving italics). It quoted Rep. Michael Waltz, a Florida Republican and U.S. Army veteran, saying, "Who's going to trust us again?" — as if the U.S. foreign policy record thus far had been a model of trustworthiness. It even devoted front-page attention to Sen. Lindsey Graham's fears that a Taliban victory might pose new terrorist threats to the United States. That same day, the AP reported, Gen. Milley warned senators that the rise of the Taliban might indeed endanger the United States in unforeseen ways.

Neither the AP nor the Post noted that such new "threats" usually prompt new bonanzas for defense contractors and new catastrophes for the unlucky civilians who pay the ultimate price for campaigns launched in the names of "security" and "freedom."

The Wall Street Journal, the AP and others peppered their reportage with (doubtlessly factual) indictments of the Taliban's brutality and its history of violently subjugating women. But the antagonisms ended there. There was no mention of the fact that in 2019, U.S. and Afghan forces killed more civilians than the Taliban did. Or that U.S. and Afghan forces are under investigation by the International Criminal Court for war crimes, including rape and torture. Or that a staggering number of deaths and injuries have been inflicted by U.S. drone operations and airstrikes throughout the region. Or that the National Security Agency had been spying on virtually every Afghan with a cell phone. Or that the U.S. decision to re-destabilize the country critically exacerbated the refugee catastrophe (with roughly 6 million Afghans displaced so far). Also swept under the carpet were the Afghanistan Papers, leaked documents that revealed U.S. officials had blatantly lied and fudged reports about the progress of their trillion-dollar project for years.

When it comes to foreign policy, American lawmakers seem to be feminists and freedom fighters only when it's convenient. Otherwise, human rights and democracy serve as buzzwords and stratagems, too easily wielded by a military establishment that believes global problems require military solutions, which in return require half of Congress' discretionary spending.

When it comes to the media establishment's selective criticisms of tragedies like Afghanistan and the broader role of the U.S. military — not to mention its often inglorious and sometimes depraved history — it ends up doing the bidding, knowingly or otherwise, of the world's most moneyed military-industrial complex.

Shaan Sachdev writes about political bias, philosophy, sex and the New York subway, among other things. His website is here.