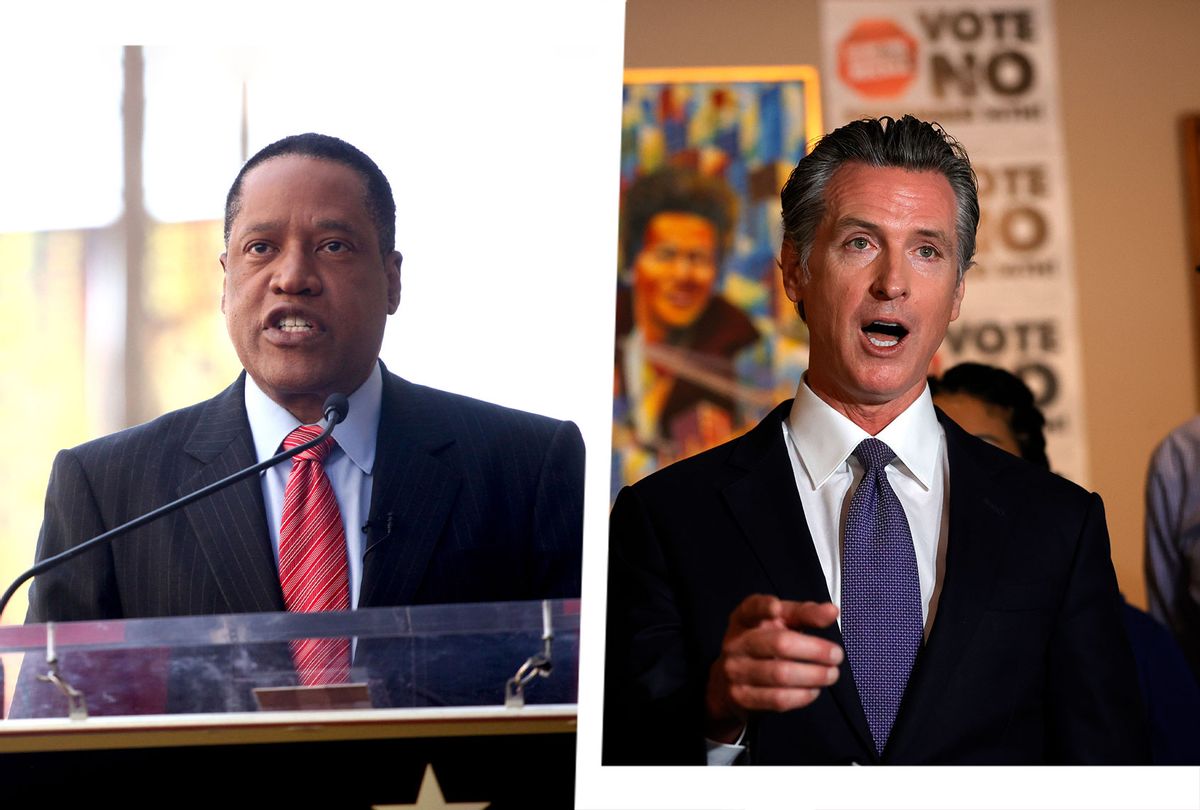 Last spring I wrote an optimistic piece about the attempted recall of California Governor Gavin Newsom, concluding that it wouldn't go anywhere because "California is the beating heart of blue America and this time the Terminator isn't going to be on the ballot, the state isn't in a perpetual state of crisis over funding and the California Republican Party is a joke." All of that remains true, but three weeks out from election day, it's clear that unless Democrats get out the vote, Newsom could actually be in trouble — and that means the U.S. will be in trouble too.

It is absurd that Newsom is being recalled in the first place. California has money in the bank, the pandemic has been handled well, especially compared to some of the other big states such as Florida and Texas which are buckling under the onslaught of the Delta surge and are suffering far more hospitalizations and deaths. By today's polarized standards, Newsom is very popular with a 57% approval rating and 60% approving of his handling of the COVID crisis according to the latest CBS News poll. Moreover, he's up for election next year anyway and the state will have to spend over $270 million for this unnecessary charade.

So why is such a thing happening?

This archaic law goes back to the progressive reform era at the turn of the 20th century but never produced a successful recall until Arnold Schwarzenegger unseated Gray Davis in 2003. That was the first time anyone managed to get the required signatures of 12% of the turnout in the previous election. This time, necessary COVID mitigation measures and Trump's defeat energized enough Republicans to sign up and get the recall on the ballot (with the help of a three-month extension granted by a judge because of the pandemic.)

If Newsom fails to get 51% of the vote he will be defeated while whichever of the 46 gadflies on the ballot gets the most vote goes on to become governor. It's entirely possible that someone could become governor of the biggest state in the US with only 10% of the vote. It's a daft system that desperately needs to be tossed in the dustbin of history.

You might think that a Republican pulling this off is impossible since the state is so blue it's downright iridescent. But weird off-year elections like this one are notoriously low turnout and polling right now is showing a serious enthusiasm gap. Republicans in the state are salivating at the chance to pull off an anti-democratic, legal coup in the most liberal state in the country while Democrats either aren't paying attention or see Newsom as "unlikeable." (They really need to wake up and recognize that what's really unlikeable is a Trumpish right-winger in the governor's mansion.)

The assumption early on was that the reality show star and former Olympian Caitlyn Jenner would be the main challenger. Trump's brain trust, led by former campaign manager Brad Parscale, was running her campaign and she was getting a lot of press. But she flamed out early, taking time off from the campaign this summer to appear in the Australian version of Celebrity Big Brother so it's pretty clear she's not taking this seriously. The Republican front-runner now, currently polling at 20%, is also a celebrity, although he's hardly an international A-lister like Arnold. He's a D-list, LA talk radio host named Larry Elder, who calls himself "the sage of South-Central" although he more accurately represents the thinking of white South Carolina than Black South Central Los Angeles. He has never held political office, which in GOP circles is a requirement these days for leadership.

Here's a look at his thinking, so thoroughly out of step with the majority of Californians, he might as well be from outer space:

That's just the tip of the iceberg. Elder's beliefs about women are downright antediluvian. Not only has he been accused by an ex-girlfriend of brandishing a gun at her, but his sexist comments over the years are also right up there with the worst of Donald Trump. He has claimed that more women vote for the Democratic Party because they don't understand politics and are easily manipulated. A Nebraska state senator was forced to step down from his post after retweeting one of Elder's crude tweets suggesting that Women's March protesters were too ugly to be sexually assaulted. If you want a combination of Rand Paul, Donald Trump and Laura Ingraham to run the largest state in the union, Elder is your man. And that's exactly what Republicans are looking for.

I know that most people around the country probably care little about this recall election. Perhaps it seems like just more eccentric kookiness from LaLa Land. But it's deadly serious for the whole country, not just California.

If Republicans pull this off it will be one more piece of evidence that their anti-democratic strategy is working. If they can seize the reins of power in the heart of blue America by using arcane rules that benefit a minority, they will believe they are unstoppable.

And as indelicate as it is to mention this, it's important to note that California has a Democratic Senator who is 88 years old. You don't even want to imagine who Governor Larry Elder would appoint to her seat if she were suddenly no longer able to serve but you can be sure it would be a right-wing Republican. Majority Leader Mitch McConnell, R-Ky., would be pleased as punch to see the abrupt end of the Biden agenda at the hands of Californians.

The Washington Post's David Weigel reported on Tuesday, that so far a million mail-in ballots have been returned which is comparable to the return in the first week of early voting in the 2020 presidential election. He writes:

According to Political Data Inc., which has been crunching the return numbers, nearly 605,000 mail ballots have been collected from Democrats, compared with around 236,000 from Republicans and around 236,000 from voters who belong to minor parties or have "no party preference."

Assuming that the vast majority of California Democrats are voting no on the recall, that's good news for Newsom. But if we've learned anything in the last few cycles, it's that you can't extrapolate much from the early vote, so who knows if this will hold up?

If Newsom is removed from office it will not be a case of vote suppression or manipulation. They couldn't have made it any easier to exercise the franchise — every registered voter in the state has received a mail-in ballot. If California gives a big boost to the undemocratic forces on the right out of sheer laziness, we will have no one to blame but ourselves.