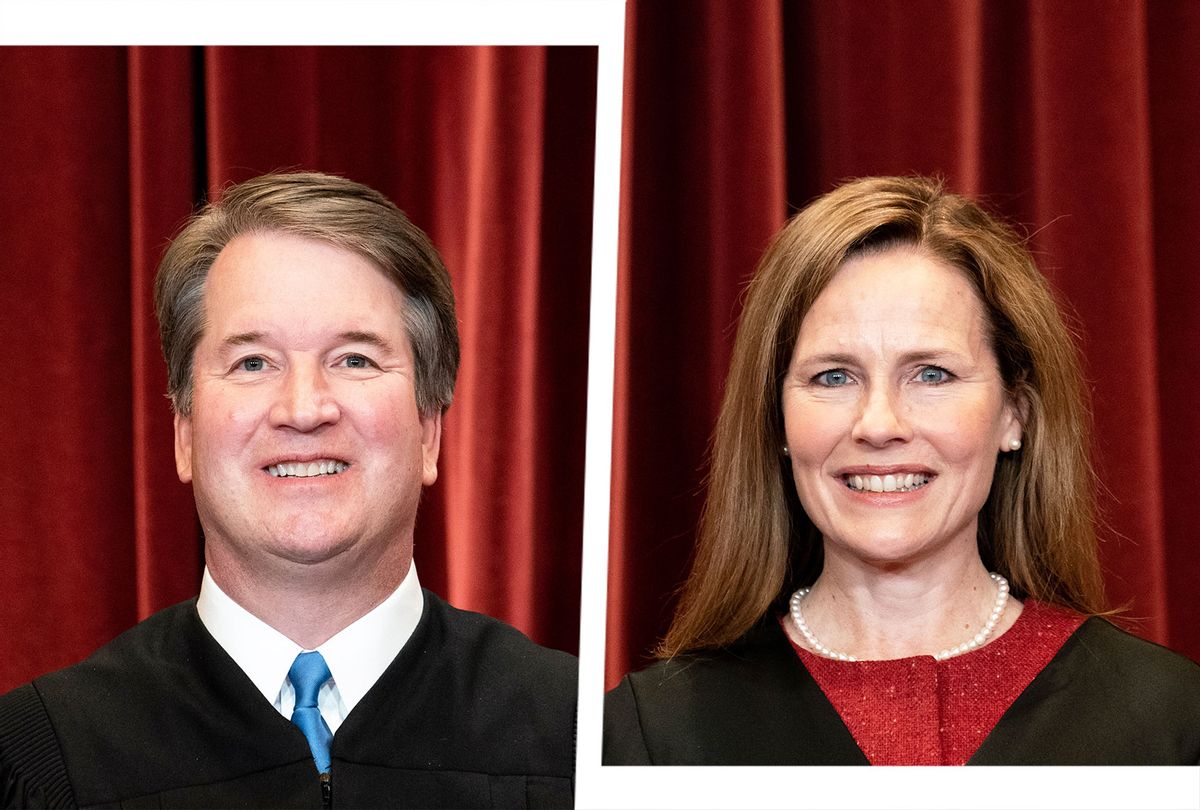 Donald Trump appointed three Supreme Court justices, and progressive America's reaction to the last two — Brett Kavanaugh and Amy Coney Barrett — can fairly be described as "Defcon 1." Liberals were terrified that these appointments, meant to replace the occasionally-liberal-on-social-issues Anthony Kennedy and the solid liberal Ruth Bader Ginsburg, would give the right exactly what they wanted: The ability to gut any progressive policy, impose their far-right views, and undermine democracy for decades, all without any accountability to the public.

Both Kavanaugh and Barrett denied this intention, of course.

Kavanaugh claimed to be "a neutral and impartial arbiter who favors no litigant or policy." Barrett claimed, "I'm just here to apply the law." Needless to say, progressives were not convinced. When Joe Biden was elected, there was even a brief flare-up of discourse about Democrats embracing court-packing to counter the far-right Court with Biden even appointing a commission to study the question.

But it is a truism in mainstream media that progressives are always "overreacting," a truism that persists despite events like the January 6 insurrection, which conclusively proved #resistance folks had a better read on Trump than the "it can't happen here" naysayers. So all it took was the Roberts court issuing a couple of early summer moderate decisions — the biggest saving the Affordable Care Act — and voila! The Beltway media went full bore scolding the left for supposedly overreacting to the Trumpist court.

"The Supreme Court's Newest Justices Produce Some Unexpected Results," declared the New York Times, with a subheadline gushing how "liberals are often on the winning side."

"The Supreme Court's Surprising Term," read a similar New Yorker headline, with a subheadline promising that "the Court has largely avoided partisanship."

"Supreme Court this session saw strong majorities that did not adhere to the Trump brand or even the agenda of the far right," declared U.S. News & World Report.

"Ideological lines turn out to be more fluid than partisans had imagined when Barrett was named," claimed a headline in the Wall Street Journal.

And so on and so forth and on and on. The media narrative was set: Liberals are hysterical, the Supreme Court is fair, and gosh, let's just stop all this talk about court-packing already!

Now, the heat is off, and it appears the Republican majority on the Supreme Court feels free to do exactly what they were appointed to do: Impose their far-right ideology on an unwilling public and trample all good-faith legal reasoning and precedent to do so.

On Tuesday night, in a shockingly incoherent decision, the Supreme Court upheld a lower court ruling by a Trump-appointed far-right judge, Matthew Kacsmaryk, forcing the Biden administration to keep Trump's hateful "remain in Mexico" policy towards refugees applying for political asylum. Biden may be the duly elected president, but it appears this Trump appointee-heavy Republican court still thinks Trump should be setting immigration policy.

It is hard to even measure how radical this decision is. It is a sign that having secured a media narrative of "moderation" the Court feels free to stomp all over legal norms and basic rationality in order to impose a right-wing agenda. As Ian Millhiser at Vox wrote, the decision implies the Biden administration "committed some legal violation when it rescinded a Trump-era immigration policy, but it does not identify what that violation is." So the Biden administration is now being forced into a policy it doesn't want, based on legal reasoning that is not even available to them.

Mark Joseph Stern of Slate tweeted some more points about how radical this is:

I have very smart lawyer friends who assured me the Supreme Court would not do what it did tonight. That the conservative justices would not leap headfirst into partisan nihilism. They're in a state of shock right now. This is one of the most lawless things SCOTUS has ever done.

While noting the order "was only one paragraph," University of Wyoming law professor Stephen Feldman and author of "Pack the Court!: A Defense of Supreme Court Expansion" told Salon, "the six-to-three political split along conservative-progressive lines is worrisome."

He added: "If one is looking for evidence of political balance and moderation from the conservative Supreme Court justices, including Trump's three nominees, this decision does not provide it."

This decision is a disaster on its own, on two levels.

First is the basic human cost of forcing refugees — most of whom have made the long trip from Central America to avoid persecution at the hands of gangs — to remain in Mexico, where they are in immediate danger from predatory criminals exploiting their vulnerability. Then there's the bureaucratic disaster for the Biden administration, who is now stuck with being forced to try to talk the Mexican government into agreeing to a Trump policy only put into place in 2019, despite having promised that the policy was changing.

But the implications expand well beyond this immediate decision as well.

It suggests, as the progressive Court skeptics feared, that the Supreme Court's feints towards "moderation" this year were little more than political maneuvering meant to take the wind out of the sails of the pack-the-court crowd. Having accomplished that, the radicals on the Court now feel free to unleash their hardline right-wing views — and they aren't going to be constrained by expectations of a good-faith reading of either law or precedent in that mission.

Even in the early summer, there were skeptics of the "moderate" Court narrative. Respected legal analysts Dahlia Lithwick and Mark Joseph Stern at Slate pointed out in June that the Court "chose the very last day of the term to let us know that when the rubber hits the road, partisan politics is what matters," by further gutting the Voting Rights Act and ruling that even more dark money can flow into politics. Law professor Leah Litman at NBC News noted that "several high-profile decisions" were distracting journalists from the real story, which is "several lower-profile decisions featured more traditional partisan divisions — and those decisions are likely to be extremely consequential."

This radical "remain in Mexico" decision proves the skeptics right.

The most immediate future concern is over abortion rights. In October, the Court will hear arguments about a Mississippi law banning pre-viability abortions, which directly violates Roe v. Wade. The decision will likely be rendered in June 2022. Mississippi has directly asked the Court to overturn Roe. Despite some idiotic hot takes hoping the Roberts court will do the right thing, the odds have always been high that this Court would find some way to uphold the ban, even if they use some shell game legal reasoning that muddies the water enough to avoid the "Roe overturned" headlines that could really hurt Republicans in the 2022 midterms. Now it's even more certain that this Supreme Court feels no compunction about tearing up precedent in order to criminalize abortion.

It appears the Supreme Court is ready to dance with those that brung 'em, giving Trump and the religious right the radical policies they've always wanted. It will only mean tearing up the very idea of legal good faith and defying the will of the voters.

Having secured the misleading "moderate court" narrative, the conservative justices appear to feel free to now go hog wild. The very sloppiness of the "remain in Mexico" decision indicates a court that is done pretending at judicial restraint. They were appointed for one mission and one mission only, to impose a far-right ideology on an unwilling America. After a few head nods in the direction of moderation, it appears the far-right justices are feeling ready to let 'er rip.