How Biden and the Democrats can save abortion access before the Supreme Court overturns Roe v. Wade 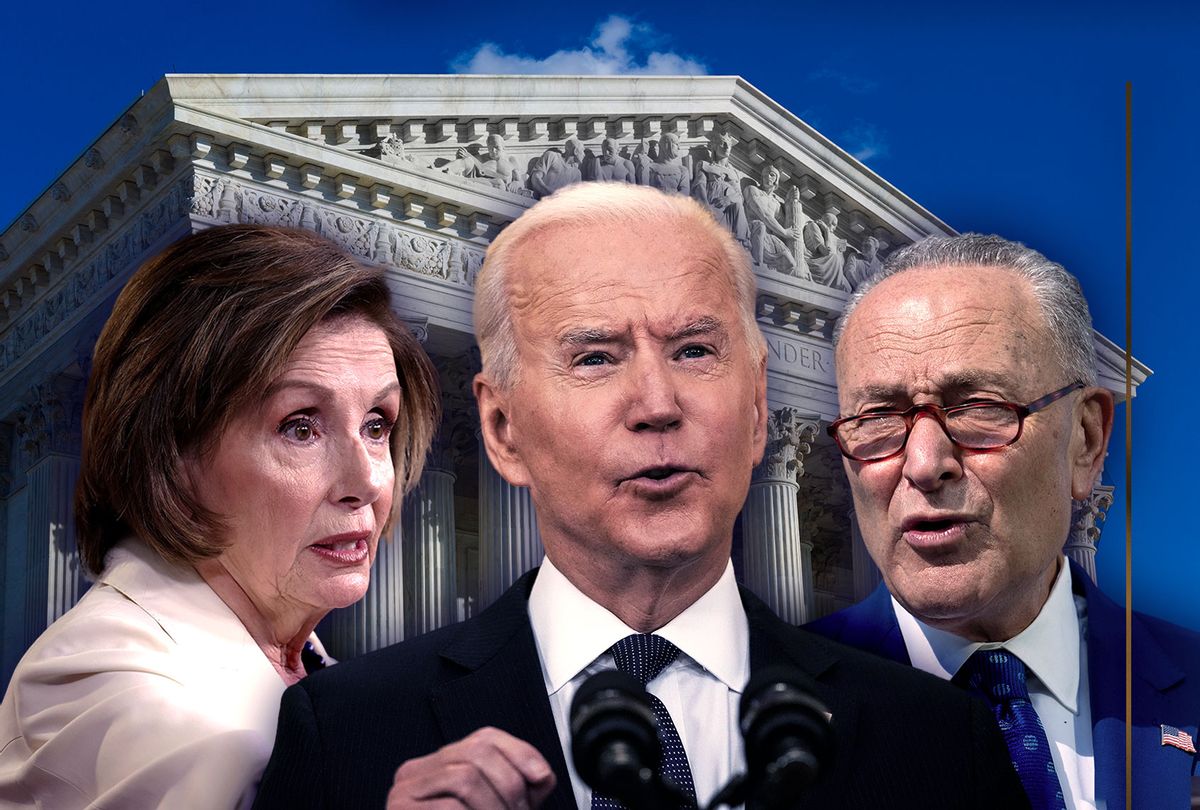 For the past six years, the Christian right endured a lot of entirely justified accusations of hypocrisy for backing Donald Trump — through "grab 'em by the pussy" and "Two Corinthians" to Stormy Daniels — for one major reason: so they could grab American women by their reproductive organs.

It's working out. Trump made good on his promise to stack the federal courts with judges that would overturn Roe v. Wade, including tilting the Supreme Court with three anti-choice justices: Brett Kavanaugh, Neil Gorsuch, and Amy Coney Barrett. Now the court, presumed to be 6-3 against abortion rights, has their chance to overturn Roe v. Wade in the form of Dobbs v. Jackson Women's Health Organization, a case about a 15-week ban on abortion in Mississippi that is so clearly in violation of Roe that even the extremely conservative Fifth Circuit Court ruled against the law.

Things are not looking good for abortion rights.

Nearly all experts believe that the only reason the Supreme Court would take this case, instead of merely letting the Fifth Circuit's decision stand, is that the conservative justices believe this is their opportunity to reverse the key finding of Roe, which disallowed states from denying patients abortion access before a fetus is viable.

But there is good news. There's already a bill in existence that, if passed into law, could stop the push to overturn Roe in its tracks.

"The Women's Health Protection Act has never been more important," Rep. Judy Chu, D-Calif., who is a primary sponsor of the bill in the House of Representatives, told Salon. The Women's Health Protection Act (WHPA) was first introduced by Democrats in Congress in 2013, in response to a crush of state laws creating deliberately unnecessary red tape meant to drive abortion providers out of business. It would, according to Chu, create "a statutory right for healthcare providers to provide abortion care and a corresponding right for their patients to receive their care free from medically unnecessary restrictions."

On Wednesday, two days after the Supreme Court announced it was looking at Mississippi's 15-week ban, the bill's co-sponsor in the Senate, Sen. Richard Blumenthal, D-Conn., put out a press release declaring that "access to abortion is a fundamental right" and announcing plans to re-introduce the legislation in Congress in the coming weeks.

On the 48th anniversary of the landmark Supreme Court decision in January, President Joe Biden put out a statement declaring that his administration is "committed to codifying Roe v. Wade." Many legal experts believe WHPA is the law that would get that done.

"This is a bill that addresses exactly the types of bans and restrictions like the 15 weeks case that's in Mississippi," Jackie Blank, the federal legislative strategist for the Center for Reproductive Rights, told Salon.

"It creates that statutory right [to abortion] automatically," Preston Mitchum, the policy director at Unite for Reproductive & Gender Equity, explained.

Chu expressed confidence that WHPA would, if brought to a vote, pass out of the House fairly easily, as it's "the most supported pro-choice bill that we've ever had," with 217 co-sponsors with its last version in the House alone. In the Senate, however, "that's where the challenge is greater," Chu acknowledged.

As with many Democratic priorities that are languishing in Congress, the problem is the Senate filibuster, which allows the Republican minority to kill any bill without even bringing it the floor for a debate. Most Democrats in the Senate wish to reform the filibuster so that Republicans can't do this, but two Democrats — Sen. Joe Manchin of West Virginia and Sen. Kyrsten Sinema of Arizona — have dug their heels in, refusing to budge on filibuster reform. So bills like WHPA, as well as gun control and voting rights bills, are currently doomed by this near-absolute GOP veto power — unless Manchin and Sinema change their minds.

WHPA was first drafted to deal with the "hundreds of anti-abortion laws on the books that are already making it difficult for people to access care," Blank explained. Many of which are still standing despite some of the more excessive regulations being struck down by a more pro-choice Supreme Court in 2016. But this Supreme Cout case could open the door to outright bans on abortion, by gutting one major limit anti-choice states have, until recently, been forced to respect, which is Roe's restriction on gestational bans. Indeed Texas, empowered by the anti-choice shift in the court, went even further in passing a 6-week ban — which is functionally a total ban on abortion — and the court's ruling in Dobbs could open the door to letting such a ban stand. Unless, of course, Democrats act make the WHPA law.

But some legal experts fear that WHPA may not be enough.

Jessica Mason Pieklo, the executive editor at Rewire News Group and the co-host of the "Boom! Lawyered" podcast, (disclosure: My partner, Marc Faletti, is the producer of Pieklo's podcast), told Salon that WHPA would still face "the huge problem of the federal courts with Trump's nominees."

Trump was able to successfully stuff the federal courts with judges, most hand-picked by far-right groups like the Federalist Society, shifting the balance of power decisively to the anti-choice side. Pieklo worries that such judges would be eager, even through tortured legal logic, to argue that Congress simply doesn't have the power to override state laws regulating abortion. Still, Pieklo said, it's important to pass WHPA because "there still are the hurdles of then challenging it." Lawsuits take time and that "creates political opportunity for additional pressures and fixes." Plus, Pieklo pointed out, "not every judge on the bench is a Trump judge." Biden is moving quickly to fill more seats, which could create a more favorable legal environment for WHPA.

Pieklo, however, thinks that a longer-term fix might be found in the Equal Rights Amendment (ERA), which has been on the cusp of joining the constitution for a few years now, even if it keeps not quite tipping over into reality. If it was fully ratified, the ERA would make discrimination on the basis of sex fully unconstitutional. Pieklo said this would strengthen the constitutional case for abortion rights. "This was actually something that Justice Ginsburg, when she was alive, wrote and spoke about. The premise behind abortion restrictions is basic sex discrimination," Pieklo explained, adding that she hopes the push to preserve abortion rights brought more attention to the need to ratify this amendment.

In the meantime, however, the threat of a Roe overturn is barrelling towards the U.S. The Supreme Court will likely hear arguments in the fall and issue a decision next summer. And while there's always the possibility that the court finds some way to keep chipping away at abortion access without signing off on a full Roe overturn, things are not looking good for abortion rights. Trump explicitly chose these judges to deliver a Roe overturn to the Christian right supporters that handed him the White House, and they are expecting their prize. Democrats have the power, right now, to end the filibuster and put abortion rights out of the hands out the Supreme Court. They just need to use the power that voters gave them to do it.