Since casting her vote to confirm Kavanaugh, Collins has taken $200,000 from key Federalist Society backers 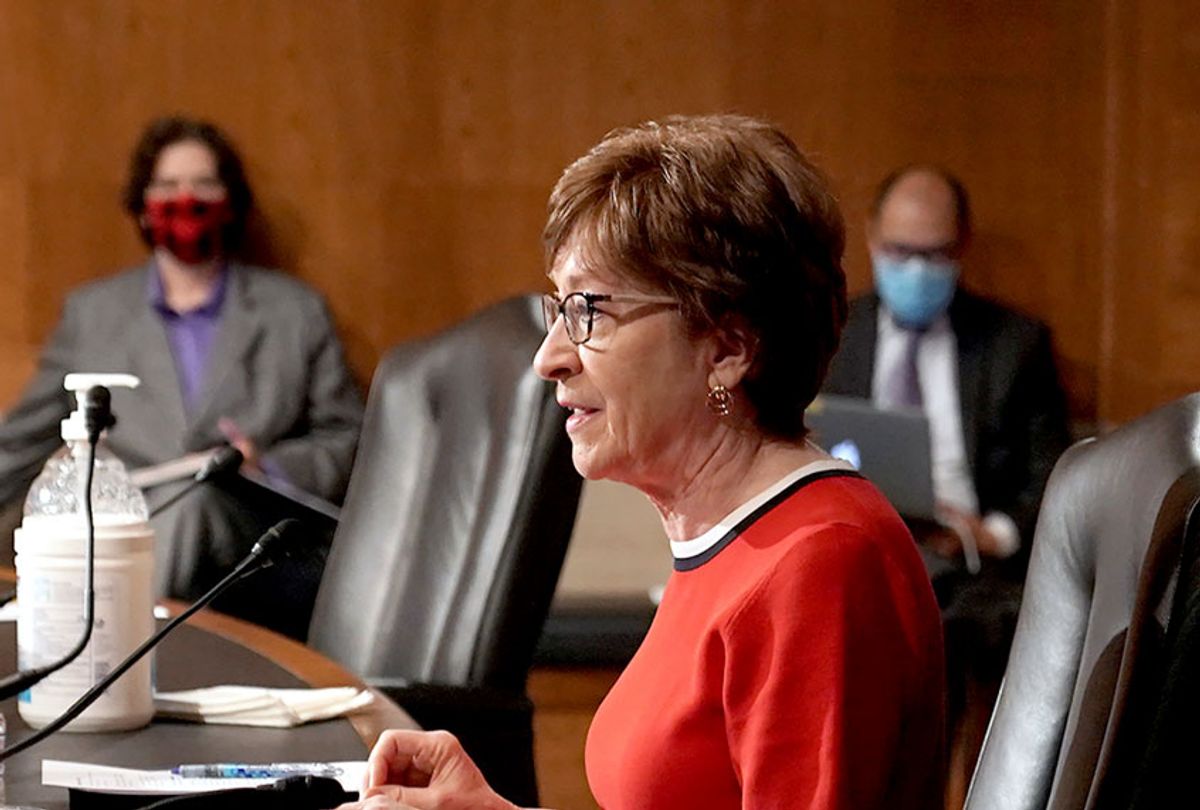 Sen. Susan Collins (R-ME) asks questions during a Senate Health, Education, Labor and Pensions Committee hearing to discuss the lessons learned during the coronavirus to prepare for the next pandemic on Capitol Hill on June 23, 2020 in Washington, DC. (Greg Nash-Pool/Getty Images)
--

Sen. Susan Collins, R-Maine, may have risked her political career on a pivotal vote to confirm Supreme Court Justice Brett Kavanaugh. While recent polls show the move has cost Collins critical support, especially among women voters, the vote has benefited her in another regard.

Since Collins cast her vote in 2018, she has raised about $200,000 from major donors to the Federalist Society, many of whom had never given to Collins before, according to The Daily Beast.

Collins, who for years appealed to women voters by stylizing herself as that rarest of all political birds — a pro-choice Republican — received the contributions to her campaign and two affiliated political action committees from 39 donors connected to the vehemently pro-life Federalist Society, including its former executive vice president Leonard Leo.

Leo, along with Senate Majority Leader Mitch McConnell, is one of the main drivers behind the GOP's historic streak of stacking federal courts over the course of Trump's term with conservative judges who oppose women's reproductive rights.

Though Leo had never given money directly to Collins before, he and his wife, Sally each made a maximum $5,600 contribution to Collins' campaign last year.

Leo's value to the Federalist Society lies in his ability to connect and woo individuals. In an interview with Vox, Amanda Hollis-Brusky, a political scientist at Pomona College who wrote a book about the Federalist Society, said that Leo runs two massive annual events for the Society: the National Lawyers Convention, "which is like a ball for the who's who in the conservative legal movement," as well as an annual law student convention, which connects students with academics and, yes, judges.

"Where the funding has made the most difference is in the kinds of events that you see in the law schools," she said. "Students tell me and faculty tell me, no matter what side of the political spectrum they come from, they'll always attend the Federal Society events, because they have the best food and the best alcohol."

Collins attended a fundraiser Leo threw for her last August at his $4 million summer mansion in her home state of Maine. Leo purchased the home the same month in which Kavanuagh was confirmed.

That event seems to have connected the pro-choice Republican to a number of new Federalist Society backers, a notion Collins scoffed at to Bloomberg reporter Steven Dennis.

"So I went to a 20-person fundraiser," Collins said. "It's just ridiculous, absolutely ridiculous."

The senator suggested that such criticism was hypocritical, because her opponents were using her vote to confirm Kavanaugh to raise money for her general election opponent, a line which she has tossed out before when denouncing the crowdfunding campaign.

Other Society-connected first-time donors included Daniel Casey — president of the Judicial Crisis Network, which threw millions behind nominations of Kavanaugh and Neil Gorsuch — and Philip Anschutz, the Colorado billionaire philanthropist who owns conservative publications The Weekly Standard and the Washington Examiner and whose foundation has supported the Federalist Society. Both gave Collins $5600, the maximum for the election cycle, according to The Beast.

"Thank you Susan Collins for thoughtfully reviewing Judge Kavanaugh's judicial record and weighing the evidence, and for being a reasonable voice during this incredibly divisive time," Carrie Severino, the group's chief counsel and policy director, wrote. "You put Maine and our country first – thank you."

Many Society donors who had previously given to Collins reportedly ramped up their spending.

Bernard Marcus, co-founder of Home Depot, and wife Billi Wilma reportedly gave a combined total of $20,800 to Collins' campaign and an affiliated PAC. Marcus is a Platinum member of the Federalist Society's Madison Club, an echelon reserved for members who give $100,000 or more. The conservative power couple donated $3,000 total to Collins' two previous campaigns.

C. Boyden Gray, Society board member and former counsel to President George H.W. Bush, ran incendiary ads pressuring Collins and other Senators to confirm conservative nominee William Pryor, Jr. Collins was one of two Republican senators to vote Pryor down — among her earliest pro-choice bona fides. Gray reportedly gave Collins $3,600 in 2014, but contributed nearly $8,000 to since her Kavanaugh vote.

But it was also Collins' pivotal vote Kavanaugh — combined with her votes on Obamacare and impeachment — which appears to have spurred progressive activists to raise more than $4 million to unseat her. This took place before her chief Democratic opponent, Maine Speaker of the House Sara Gideon, declared her candidacy.

Though Collins has raised $10.3 million over the same period of time, Gideon has significantly outpaced her, hauling in $14.8 million.

"Bribery doesn't work on Senator Collins," Kevin Kelley, a Collins campaign spokesperson, claimed to The Beast. "She made up her mind based on the merits of [Kavanaugh's] nomination. It's laughable that the same people who tried to buy Senator Collins' vote for more than $4 million now appear to be suggesting that she sold her vote for far less."