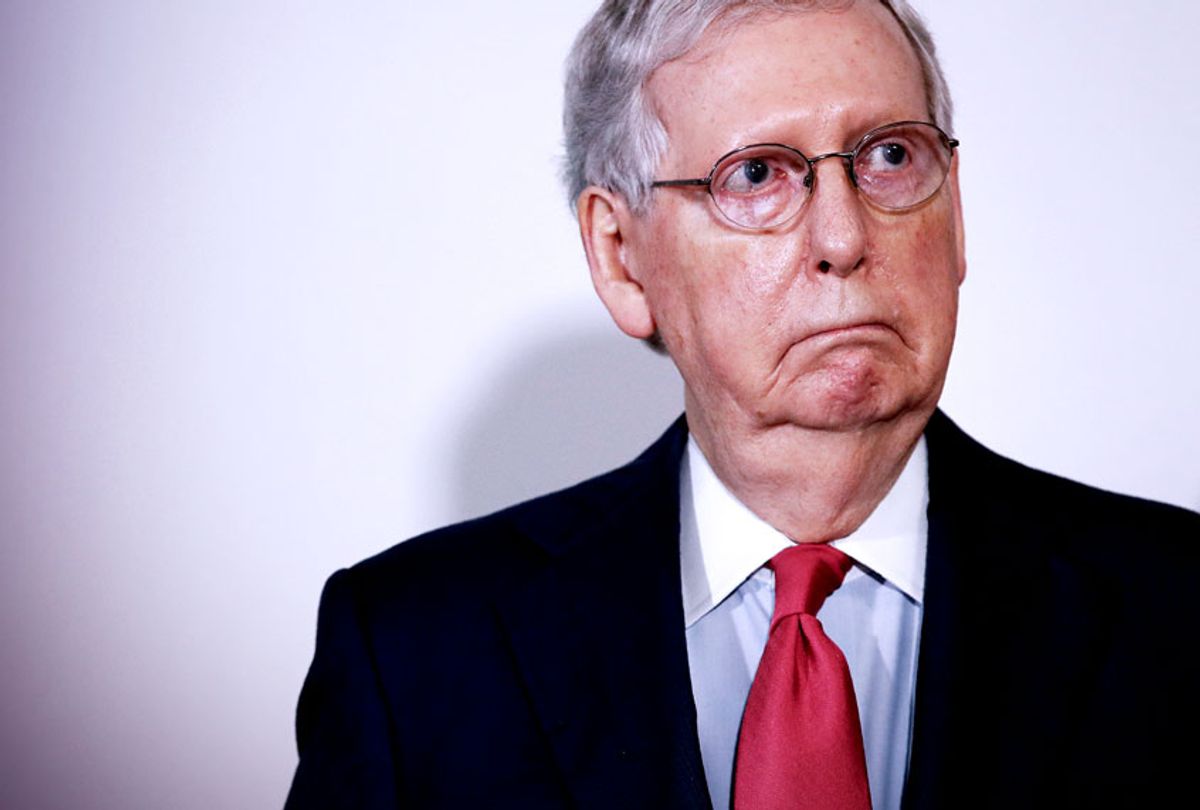 The ad dubs McConnell "Rich Mitch" as it calls out his $34 million net worth after many years spent away from Kentucky in Washington. The state he represents ranks among the lowest states in terms of jobs, health care and education.

"After 35 years, Kentuckians are still waiting for the kinds of opportunities Mitch worked so hard to give himself," the narrator says in a loose Appalachian drawl.

The spot was produced by the Lincoln Project, a group led by anti-Trump Republican lawyer George Conway — the famous "Never Trump" antagonist and husband of White House counselor Kellyanne Conway.

In a statement accompanying the ad, George Conway argued that McConnell should be ousted for allegedly "fixing" President Donald Trump's impeachment.

"When he fixed the impeachment trial by blocking evidence of Trump's high crimes and misdemeanors, McConnell violated and abased the solemn oaths he took as a United States senator," Conway said.

"Add in the fact that as our ad shows, he's managed to do much better for himself than for the people of Kentucky, and it becomes a no-brainer: McConnell has to go," he added.

McConnell blew off the ad and its backers as irrelevant.

"No scam PAC of grifters has ever been less relevant and no group of DC consultants will be forgotten faster than these thieves who bet everything on three days of dishonest ads in Kentucky," his campaign said in a statement.

Though the Lincoln Project is slim on resources for a super PAC, the group relishes taking shots at President Donald Trump and his allies. Its signature biting tone has aided several ads in going viral, well beyond the reach of their modest buys.

The president, himself, has contributed to the group's notoriety, calling its members "LOSERS" and a "disgrace" in a series of midnight tweets after an ad trashed him for his self-obsessed response to the coronavirus pandemic. That ad subsequently went viral.

Kellyanne Conway felt compelled to respond the next day, claiming that the Lincoln Project's founders — which, in addition to her husband, include former McCain campaign manager Steve Schmidt and political strategists Rick Wilson and Jennifer Horn — had "never achieved what I achieved, which is success as a presidential campaign manager. They all failed."

Polls show that McConnell faces a tougher bout than expected from Democratic challenger Amy McGrath, a retired Marine lieutenant colonel who has kept up the heat in spite of a party machine seemingly reluctant to pour resources into what it assumes is a long-shot race.

The Lincoln Project's ads targeting Trump have included several attacks on his handling of the pandemic, including one released early this month which provided a dark twist on former President Ronald Reagan's celebrated 1984 "Morning in America" campaign spot.

That ad focused on the skyrocketing unemployment rate, as well as the death toll from COVID-19. "If we have another four years like this, will there even be an America?" the narrator asked.

An earlier ad from April argued that Trump "just didn't care" about the pandemic, simply wanting to spend his time at "campaign rallies and golfing."

Two months earlier, the Lincoln Project launched an ad against embattled incumbent Sen. Susan Collins, R-Maine, specifically targeting the nominally pro-choice, middle-of-the-road Republican for her support of McConnell. Collins' fealty showed that she was "there to support corruption and loyalty to a political party," the ad said.

McConnell's own dark-money group, One Nation, has so far dropped $1.5 million this year into ads shielding Collins. In January, Collins claimed the title of "most unpopular senator" — previously held, of course, by McConnell.