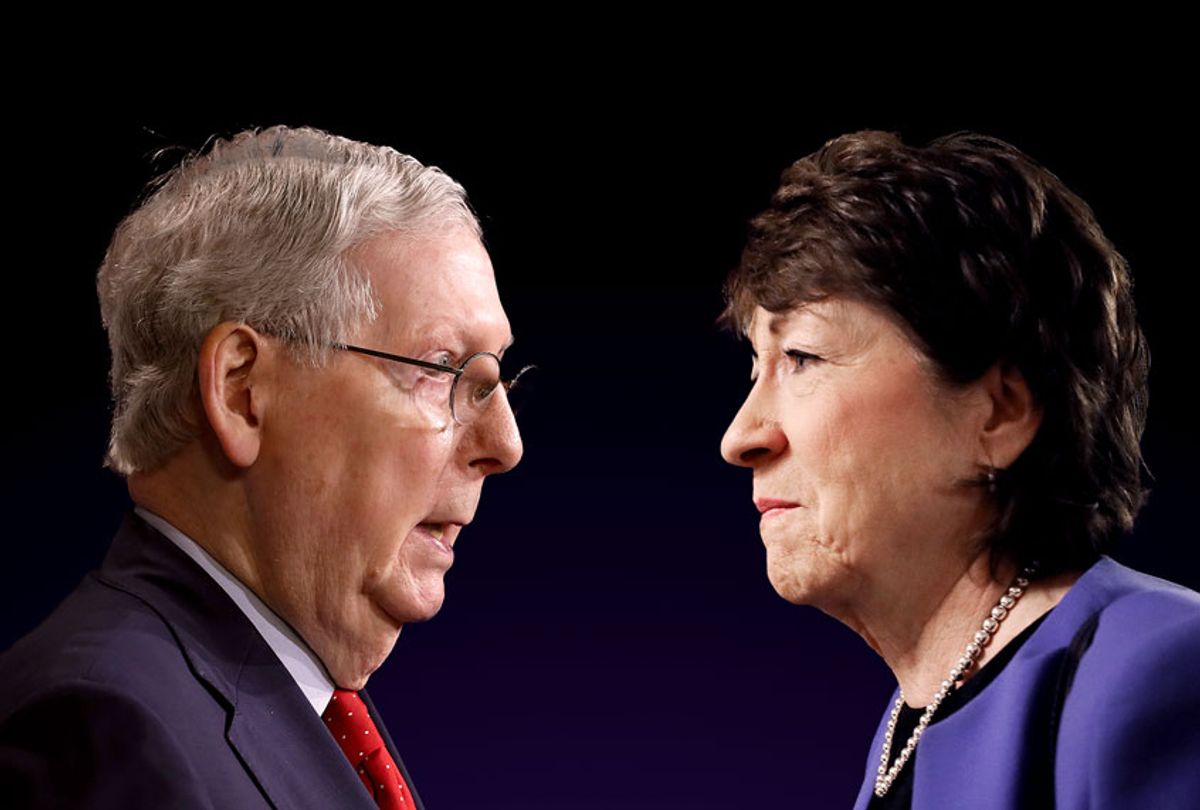 A dark-money group aligned with Senate Majority Leader Mitch McConnell, is dropping more than half a million dollars on an advertisement shielding Sen. Susan Collins of Maine, an embattled Republican incumbent, from criticism of her response to the coronavirus outbreak.

The group, One Nation, is a political nonprofit that doesn't have to disclose its donors. It also shares offices and staff with the Senate Leadership Fund, a McConnell super PAC. The 30-second ad will run across Maine on radio, TV and the web.

The ad responds to another recent ad, called "Scrounging," that criticizes Collins for neglecting to secure enough protective gear and other equipment for the state's beleaguered frontline health care workers.

"Susan Collins defends the president," the narrator of that ad says, over a graphic that quotes Collins claiming, "The president did a lot that was right in the beginning."

The One Nation ad comes to Collins' defense, claiming she has been "working to get that help, but dark money groups are spreading false information about those efforts."

The 2020 race between Collins and Democrat Sara Gideon, current speaker of the Maine House of Representatives, is one of a handful of Senate races that will determine whether the GOP, which currently holds a 53-47 majority, will maintain control of the upper chamber, and keep McConnell in the majority leader's office.

One Nation and the Senate Leadership Fund have raised a combined $190 million to protect the most vulnerable Republican seats: Those held by Martha McSally in Arizona, Cory Gardner in Colorado, Thom Tillis in North Carolina, Joni Ernst in Iowa and David Perdue in Georgia.

One Nation dropped more than $58 million on Republican Senate candidates in the 2018 midterms, and the group has already spent more than $1 million to boost Collins this year, including a $400,000 ad that ran in early January and touted her work to knock down the cost of insulin.

Collins voted against the Affordable Care Act, as well as legislation to close the Medicare Part D coverage gap.

"Our investors understand the Senate is the ultimate firewall against socialism, and we are gearing up for a massive fight next year," said Steven Law, a McConnell associate who chairs the group, in a 2019 statement.

"The Supreme Court, Green New Deal, Medicare for None — it's all going to be on the line," he added.

It was Collins' pivotal vote to confirm Supreme Court Justice Brett Kavanaugh — combined with her ACA votes and her transparently cynical waffling on Trump — that earned her a challenge from Gideon, one of the state's most prominent elected Democrats.

Last summer Collins drew sardonic criticism when her campaign posted several minutes of B-roll of the senator meeting with Mainers in factories, a classroom, a kitchen and so on. The video was mocked as a transparent gift of content for outside groups to pull from.

FEC rules bar candidates from coordinating with outside groups. The B-roll trick, however, has proven to be a popular end-around.

Last September a Republican super PAC ran an ad that used a lengthy clip from that B-roll, leading the Maine Democratic Party to complain to the FEC that it was an illegal in-kind contribution, "almost entirely comprised of footage that the campaign created."

Though Maine's politics can be peculiar (and Donald Trump won one of its four electoral votes in 2016) it has drifted toward Democrats in recent years. Collins, a nominally pro-choice, middle-of-the-road Republican was a good fit for Maine for decades, but now appears increasingly vulnerable. In January she nabbed the title of "most unpopular senator" — previously held, of course, by Mitch McConnell.

Watch the full ad from One Nation below via YouTube: