When asked in the Oval Office what "lesson" he had learned from impeachment, Trump said: "Democrats are crooked" 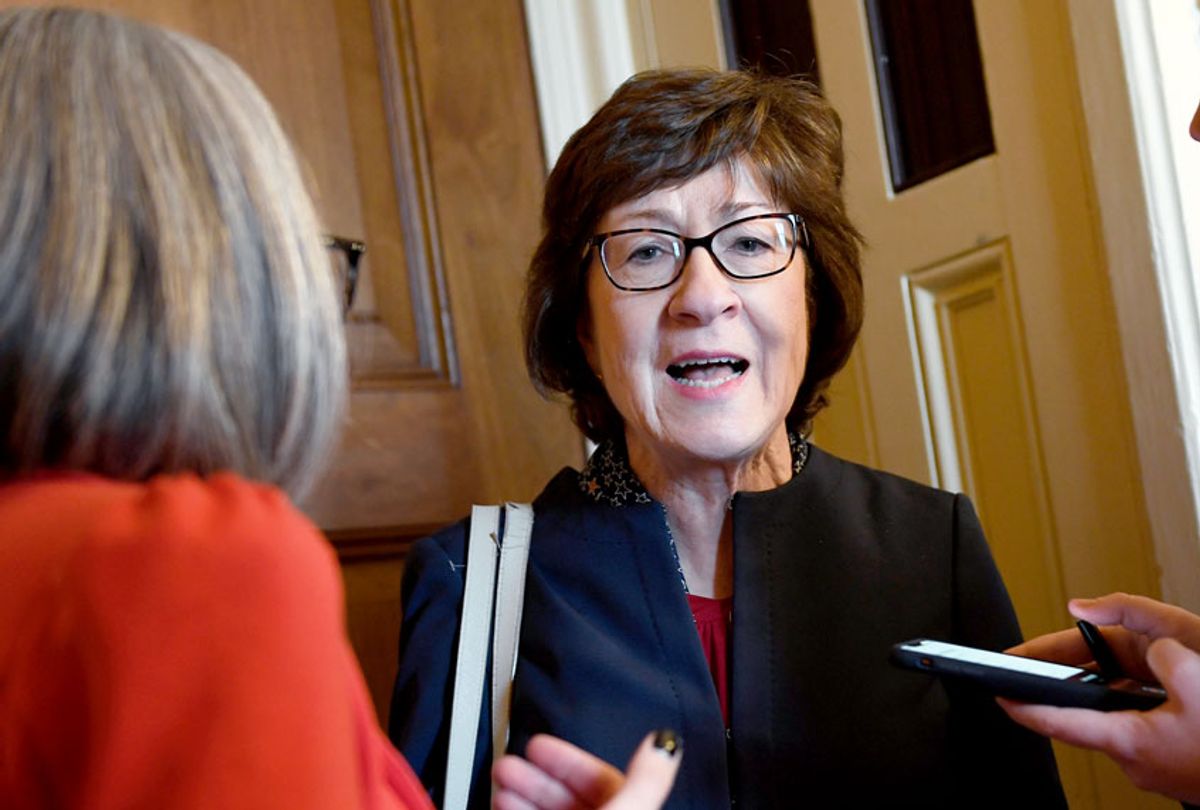 Sen. Susan Collins, R-Maine, dodged questions from a reporter Wednesday who pressed her on whether she still believed her claim that President Donald Trump has learned a "lesson" by being impeached.

Collins, along with several other Republicans, defended her vote to acquit Trump in his Senate impeachment trial by arguing that though his actions were "wrong," he had learned a "pretty big lesson" from being impeached.

Collins later acknowledged to Fox News that her view was "more aspirational on my part."

Trump rejected Collins' claim that he learned any "lesson," and followed up his acquittal by leading a purge of administration officials who testified against him or were involved in the impeachment.

Barr admitted earlier this week that he created a process for Trump attorney Rudy Giuliani to submit information he obtained during his hunt for damaging information on former Vice President Joe Biden to federal prosecutors. Giuliani is under a federal investigation, and there is no evidence Biden abused his authority.

CNN's Manu Raju pressed Collins on whether she still felt had Trump learned his lesson Wednesday, given his recent actions.

"I don't know what actions you're referring to," she replied. "I've made very clear that I don't think anyone should be retaliated against."

Collins argued that she did not vote to acquit Trump, because she believed he had learned from his impeachment.

Pressed again on whether Trump learned any lessons, Collins shut the door and walked away.

Sen. Lisa Murkowski, R-Alaska, who also voted to acquit Trump, acknowledged that Trump's behavior since the trial does not suggest he learned much from the months-long ordeal.

"There haven't been any strong indicators this week that he has," she told Raju.

Collins was not the only senator that predicted Trump would behave differently after impeachment. Sen. Lamar Alexander, R-Tenn., asserted that the president would "think twice" in the future. Sen. Shelly Moore Capito, R-W.Va., argued Trump had "learned that he has to be maybe a little more judicious and careful."

Despite becoming only the third president to be impeached, Trump dashed those hopes Wednesday when he responded to a question from a reporter in the Oval Office.

"That the Democrats are crooked — they've got a lot of crooked things going — that they're vicious, that they shouldn't have brought impeachment and that my poll numbers are 10 points higher because of fake news like NBC, which reports the news very inaccurately," Trump responded.

Author Molly Jong-Fast wrote at The Bulwark that there was only one lesson Trump was likely to learn from his party giving him a pass on impeachment.