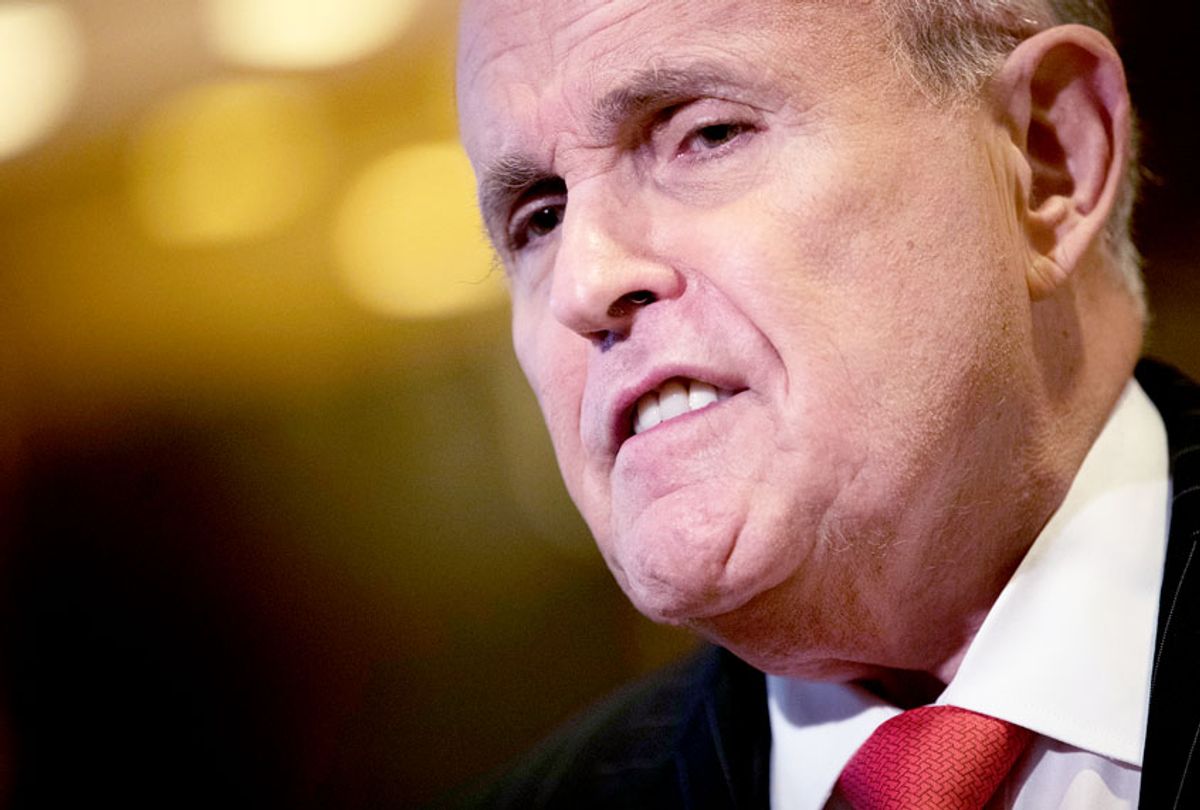 Subpoenas issued by federal prosecutors to people with ties to Rudy Giuliani, the personal lawyer of President Donald Trump, suggest a sweeping investigation is being conducted into Giuliani and his associates, with potential charges including obstruction of justice, money laundering and wire fraud, The Wall Street Journal first reported Monday and The Washington Post confirmed.

Federal prosecutors at the U.S. Attorney's Office for the Southern District of New York have reportedly issued subpoenas seeking records and information related to Giuliani and his associates, Lev Parnas and Igor Fruman. That office, which Giuliani once ran, has already indicted Parnas and Fruman on campaign finance charges, accusing them of conspiracy and making false statements to the Federal Election Commission.

Giuliani, who has not been accused of any crimes, has denied any wrongdoing. Parnas and Fruman have pleaded not guilty.

Investigators are reportedly scrutinizing Giuliani's consulting business and donations made to America First Action, the main pro-Trump super PAC set up by the president's advisers and allies after his election, as well as its affiliated nonprofit, America First Policies.

The subpoenas suggest that federal prosecutors are examining a wide range of potential crimes, according to the newspapers, including serving as an unregistered foreign agent, donating funds from foreign nations, making false statements to the federal government, conspiracy to defraud the U.S., making contributions in a false name, mail fraud and wire fraud.

Kelly Sadler, a spokeswoman for America First Action and America First Policies, reportedly said the organizations reached out last month to federal prosecutors in New York and offered to cooperate. She said neither group has received a subpoena.

Prosecutors alleged in the indictment last month that Parnas and Fruman falsely reported the true source of a $325,000 donation to America First Action by listing it as a gift from an energy company they had founded. The super PAC reportedly placed the contribution into a segregated bank account.

Giuliani told the WSJ on Sunday that when clients have asked him to do something related to the Trump administration, he has referred them to registered lobbyists. He also denied business dealings in Ukraine since he joined Trump's legal team in April 2018.

"All they have to do is ask me," Giuliani told the newspaper of investigators. "There's obviously a concerted effort to spread as many lies about me as possible, to destroy my reputation so that I'm not credible when I continue to reveal all of the massive evidence of criminality by the Bidens."

Giuliani and Trump have been accused of pressing Ukraine to investigate former Vice President Joe Biden, now a frontrunner for the Democratic presidential nomination, and his son, Hunter Biden. They have alleged it was corrupt for Hunter Biden to serve on the board of Burisma Holdings, a Ukrainian energy company, while his father, as vice president, was leading the Obama administration's anti-corruption effort in the country.

Both Bidens have denied wrongdoing. Hunter Biden has said he used "poor judgment" when he decided to join the board, but denied he did acted improperly.

Giuliani and Trump's claims are at the heart of the impeachment inquiry into the president. House Democrats are investigating allegations that Trump pressured Ukrainian President Volodymyr Zelensky in a July 25 phone call to investigate the Biden family, as well as a baseless conspiracy theory about Ukrainian meddling in the 2016 election.

Giuliani has emerged as a key figure in the impeachment inquiry due to allegations that he pursued a shadow foreign policy operation intended to pressure Ukraine to commit publicly to the investigations.

Parnas and Fruman helped introduce Giuliani to several current and former Ukrainian officials involved in bolstering unsubstantiated allegations about Biden and his son, as well as allegedly orchestrated  the ouster of former U.S. Ambassador to Ukraine Marie Yovanovitch.

In her testimony before Congress earlier this month, Yovanovitch said the two men had worked with Giuliani "to remove me from [my] post."

"I didn't understand that at all, because I had never met Mr. Parnas and Mr. Fruman, and so it was unclear to me why — why they were so interested — in doing this," she said.

Parnas and Fruman's efforts in Ukraine reportedly intersected with their business interests, according to the WSJ.

Since being indicted, Parnas has signaled that he is willing to cooperate in the impeachment inquiry. He reportedly provided photo, video and audio recordings to House impeachment investigators over the past week. He submitted the material to the House Intelligence Committee in response to a congressional subpoena, though some of the information requested by lawmakers is in the hands of federal prosecutors in New York.