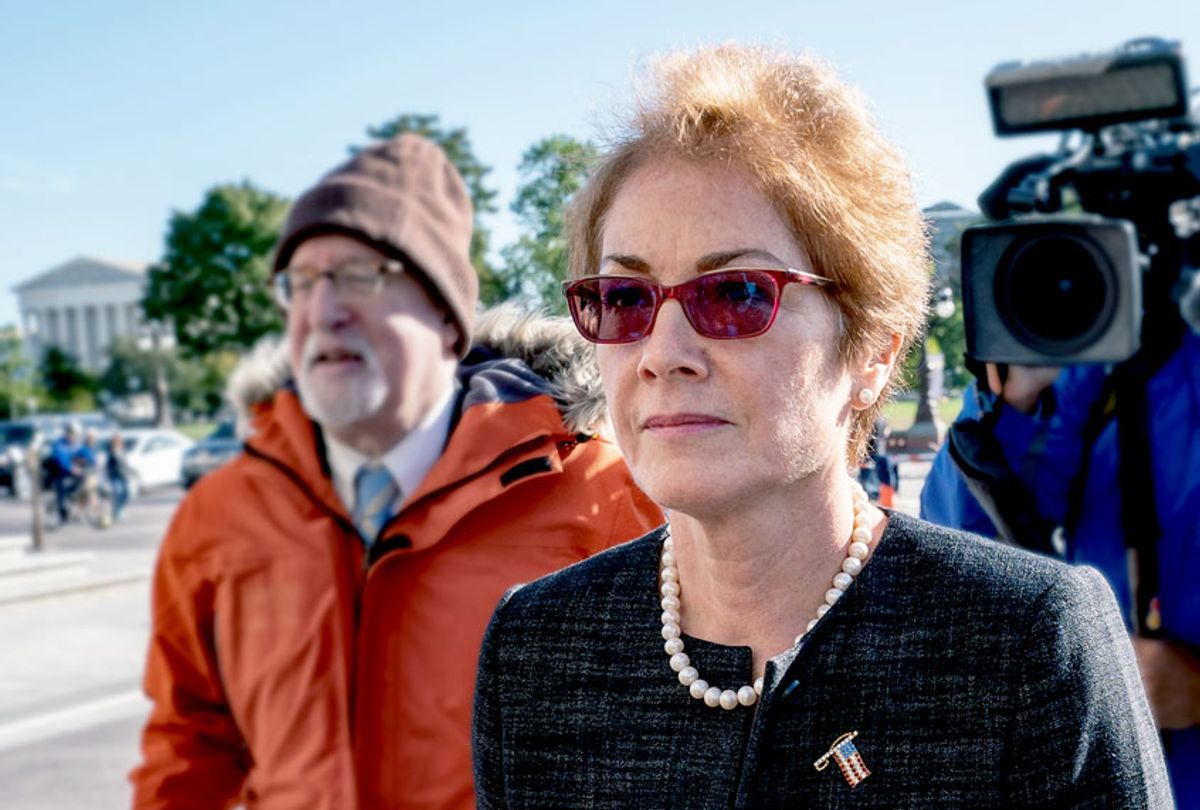 Former U.S. ambassador to Ukraine Marie Yovanovitch, arrives on Capitol Hill, Friday, Oct. 11, 2019, in Washington, as she is scheduled to testify before congressional lawmakers on Friday as part of the House impeachment inquiry into President Donald Trump. (AP Photo/J. Scott Applewhite)
--

Marie Yovanovitch, the former U.S. ambassador to Ukraine, told House impeachment investigators on Friday that President Donald Trump had pressured the State Department to remove her, even though a top department official assured her that she had "done nothing wrong."

Yovanovitch said that after being asked by the State Department to extend her tour until 2020, she was abruptly recalled from her post in late April 2019. Deputy Secretary of State John Sullivan told her that the president had lost confidence in her, according to her prepared remarks, obtained by The Washington Post.

"He added that there had been a concerted campaign against me, and that the department had been under pressure from the president to remove me since the summer of 2018," Yovanovitch said. "He also said that I had done nothing wrong and that this was not like other situations where he had recalled ambassadors for cause."

Yovanovitch, a diplomat with more than 30 years in the Foreign Service, said in her statement that she was "incredulous that the U.S. government chose to remove an ambassador based, as best as I can tell, on unfounded and false claims by people with clearly questionable motives."

She warned that allowing misinformation to undermine U.S. diplomats like herself would "harm" the United States.

Yovanovitch appeared for her expected closed-door deposition before the House Intelligence, Oversight and Foreign Affairs Committees as part of their impeachment inquiry that centers on Trump's efforts to urge Ukrainian President Volodymyr Zelensky to investigate former Vice President Joe Biden and the purported involvement of Ukraine in the 2016 presidential election.

Hours into her testimony, the chairmen of the three committees released a statement saying that the State Department, at the direction of the White House, had directed Yovanovitch not to appear for her voluntary interview. In response, the House Intelligence Committee issued a subpoena to compel her testimony Friday morning.

"This duly authorized subpoena is mandatory, and the illegitimate order from the Trump administration not to cooperate has no force. As is required of her, the Ambassador is now complying with the subpoena and answering questions from both Democratic and Republican members and staff," Intelligence Chairman Adam Schiff, Oversight Chairman Elijah Cummings, and Foreign Affairs Chairman Eliot Engel said.

"Any efforts by Trump Administration officials to prevent witness cooperation with the Committees will be deemed obstruction of a co-equal branch of government and an adverse inference may be drawn against the President on the underlying allegations of corruption and cover up," they added.

Yovanovitch had previously been scheduled to testify before the committee son Oct. 2, but her appearance was postponed.

In a fiery letter to House Democrats last week, Secretary of State Mike Pompeo pushed back against requests from House Democrats to interview five current and former State Department officials, including Yovanovitch.

Yovanovitch has emerged as a central figure in Democratic-led impeachment inquiry into Trump.

In his July 25 phone call with Zelensky, Trump referred to Yovanovitch as "bad news." It was during that call when Trump pressed Zelensky to open an investigation into Biden, a leading Democratic presidential candidate.

Yovanovitch left Ukraine in May, months before the end of her diplomatic tenure, after coming under intense scrutiny from right-wing media, who alleged she was engaged in efforts to undermine Trump's presidency.

According to the intelligence community whistleblower complaint at the heart of Democratic-led impeachment inquiry, Yovanovitch was removed from her post because she had openly criticized the office of Yuriy Lutensko, then Ukraine's prosecutor general, and Rudy Giuliani, the president's personal lawyer. Lutsenko at one point alleged she had given him a "do not prosecute" list. The State Department has called Lutensko's claim of receiving a do not prosecute list an "outright fabrication" and Lutsenko himself later walked back his claims.

Yovanovitch, according to her prepared remarks, noted Lutsenko's allegation, since retracted, told lawmakers that she wanted to "categorically state that I have never myself or through others, directly or indirectly, ever directed, suggested, or in any other way asked for any government or government official in Ukraine (or elsewhere) to refrain from investigating or prosecuting actual corruption."

"As Mr. Lutsenko, the former Ukrainian Prosecutor General has recently acknowledged, the notion that I created or disseminated a 'do not prosecute' list is completely false — a story that Mr. Lutsenko, himself, has since retracted," she added.

She also called the notion that she had been "disloyal" to Trump "fictitious," and said she did not know Giuliani's motives for attacking her.

"But individuals who have been named in the press as contacts of Mr. Giuliani may well have believed that their personal financial ambitions were stymied by our anti-corruption policy in Ukraine," she continued.

Two foreign-born associates of Giuliani, Igor Fruman and Lev Parnas, were arrested Wednesday on campaign finance violations. The men were working for Ukrainian officials to remove Yovanovitch from her job, according to an indictment that federal prosecutors unsealed Thursday.

Rudy Giuliani, the president's personal attorney, has previously said that Fruman and Parnas worked with him as part of his dealings in Ukraine, which included efforts to urge that country to investigate former Vice President Joe Biden and his son, Hunter.

Earlier on Friday, the U.S. Ambassador to the European Union, Gordon Sondland, indicated he would appear for a deposition under subpoena next week, defying the State Department's direction not to cooperate.

Sondland's closed-door interview was originally scheduled for this week but the White House blocked his appearance, prompting the chairmen of the congressional panels to issue him a subpoena.