Soliciting probes into a domestic political rival is "not in accord with our values," John Sullivan said 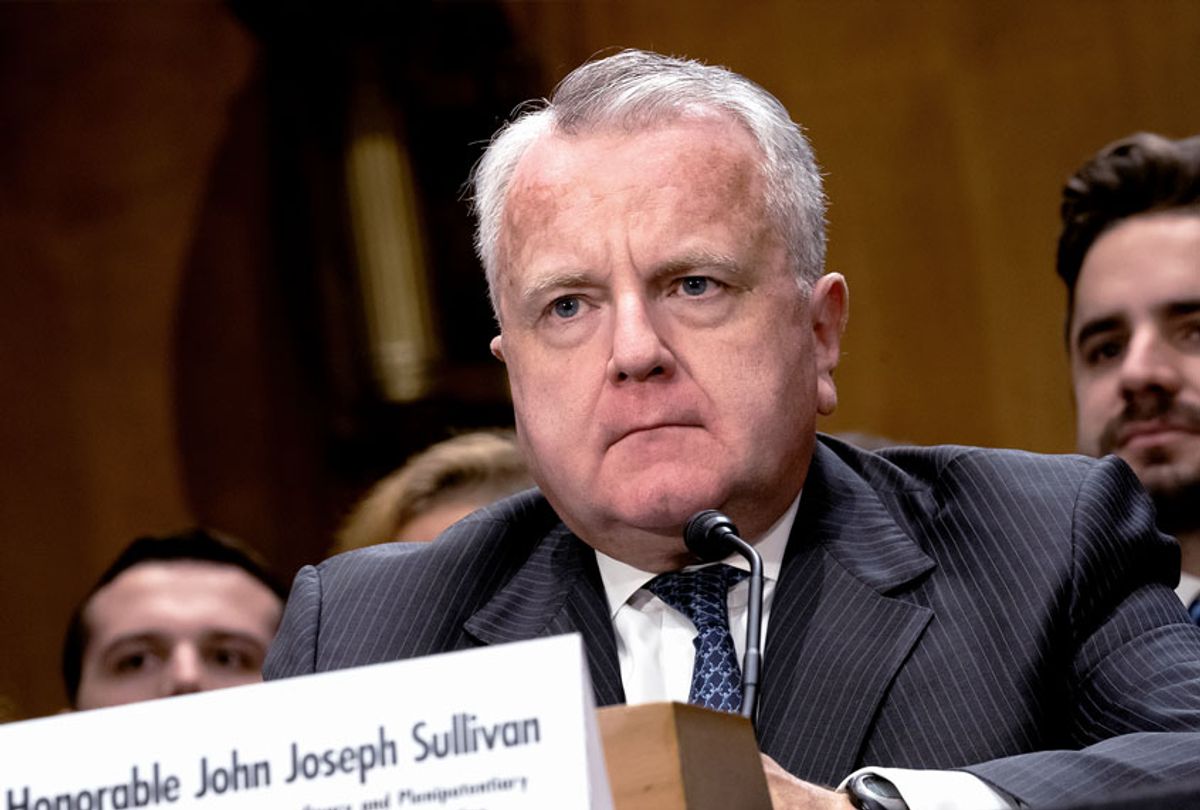 Deputy Secretary of State John Sullivan appears before the Senate Foreign Relations Committee for his confirmation hearing to be the new U.S. ambassador to Russia, on Capitol Hill in Washington, Wednesday, Oct. 30, 2019. President Donald Trump's nominee faced questions about Russian election interference and the ouster of the U.S. ambassador to Ukraine at his Senate confirmation hearing. (AP Photo/J. Scott Applewhite)
--

Deputy Secretary of State John Sullivan appeared to break with President Donald Trump on Wednesday, telling lawmakers that it would not be "in accord with our values" for a president to ask a foreign government to investigate a domestic political rival.

"Soliciting investigations into a domestic political opponent — I don't think that would be in accord with our values," said Sullivan, who was speaking to the Senate Foreign Relations Committee, which is vetting his nomination to serve as the U.S. ambassador to Russia.

He was asked about the now-infamous July 25 phone call between Trump Ukrainian President Volodymyr Zelensky, during which Trump asked his Ukrainian counterpart to investigate former Vice President Joe Biden. Sullivan said that although asking a foreign government to investigate a domestic political ally is wrong, engaging in a broader anti-corruption campaign in Ukraine aligns with the nation's goals.

In the days before the call, the White House withheld nearly $400 million in military aid to Ukraine. Sullivan said he was not aware of a link between the withholding of military aid and Zelensky launching the investigations. (Trump has repeatedly denied the existence of a "quid pro quo" and has decried the impeachment investigation as a "hoax.")

Sullivan, however, acknowledged that he was the one who informed Marie Yovanovitch, the former U.S ambassador to Ukraine, that she was being recalled from her post early. Sullivan said that it was because the president had lost confidence in her. He said he had asked Secretary of State Mike Pompeo why Trump had lost confidence in her but was not given a specific reason.

Pressed by Menendez on whether he was "aware there were individuals and forces outside the State Department seeking to smear Amb. Yovanovitch," Sullivan said, "I was." He went on to say that he knew Rudy Giuliani, the president's personal lawyer, was engaged in carrying out a "shadow Ukraine policy."

"My knowledge in the spring and summer of this year about any involvement of Mr. Giuliani was in connection with a campaign against our ambassador to Ukraine," Sullivan said.

He said he reviewed a packet of information about Yovanovitch that was given to the State Department counsel. He claimed that he was told it came from "someone at the White House,” but he did not know who was responsible for producing it.

"It didn't provide, to me, a basis for us taking action against our ambassador" Sullivan said of the packet. "But I wasn't aware of all that might be going on in the background and to be cautious, I asked that the packet of materials . . . be looked at by inspector general and the Justice Department."

Yovanovitch, a diplomat with more than 30 years in the Foreign Service, was abruptly recalled from her post in late April 2019. Her dismissal came under fresh scrutiny following the release of a rough summary of Trump's July 25 phone call with Zelensky.

On the call, Trump referred to Yovanovitch as "bad news.” Zelensky told Trump that he agreed Yovanovitch was a "bad ambassador," according to the White House memo.