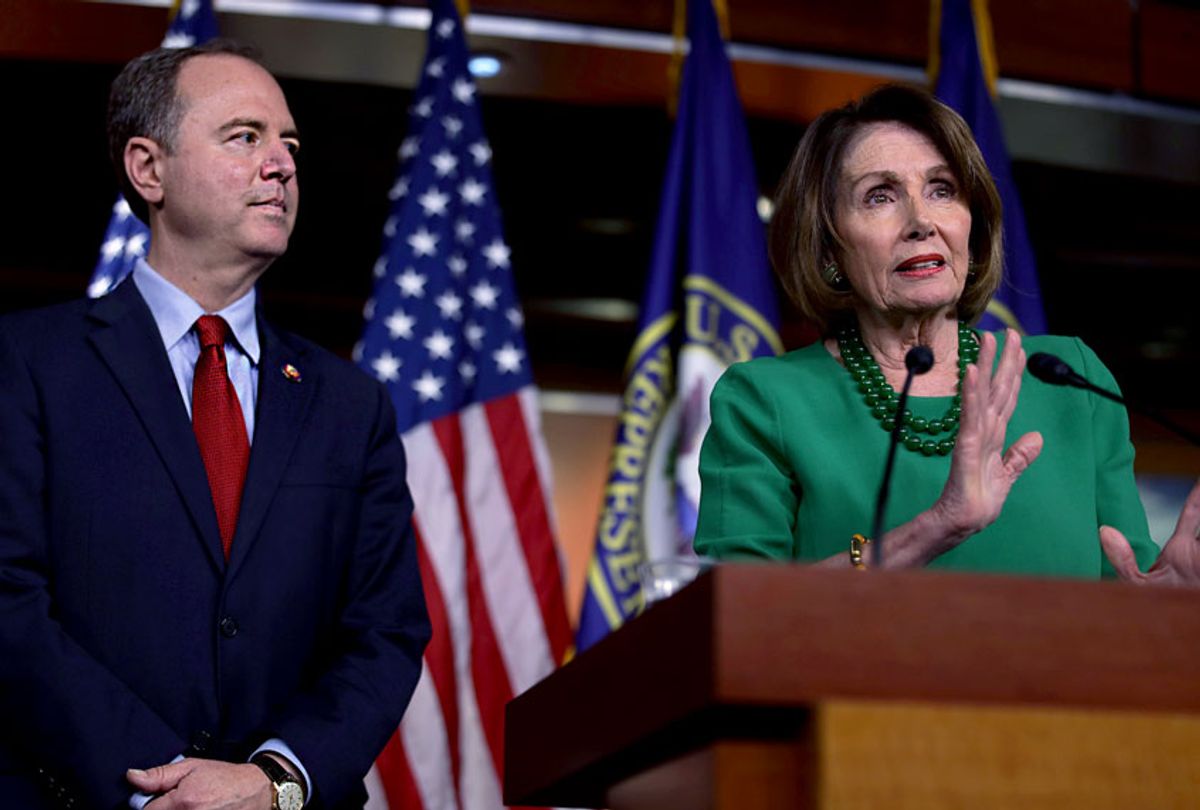 U.S. Speaker of the House Rep. Nancy Pelosi (D-CA) speaks as Chairman of House Intelligence Committee Rep. Adam Schiff (D-CA) listens during a news conference at the U.S. Capitol October 15, 2019 in Washington, DC. Pelosi said she is holding off on a full House vote to authorize an impeachment inquiry against President Donald Trump. (Alex Wong/Getty Images)
--

President Donald Trump on Wednesday morning again went on a sustained Twitter offensive as House Democrats prepared to vote on and advance a resolution establishing the procedures of the public phase of the impeachment inquiry.

In recent days, Trump has suggested that Republicans defend him by arguing that his dealings with Ukraine were appropriate.

"Republicans are very unified and energized in our fight on the Impeachment Hoax with the Do Nothing Democrats, and now are starting to go after the Substance even more than the very unfair Process because just a casual reading of the Transcript leads EVERYBODY to see that the call with the Ukrainian President was a totally appropriate one," the president tweeted.

Trump claimed the impeachment inquiry was "nonsense" and "just a continuation of the Witch Hunt Hoax, which has been going on since before I even got elected."

He later retweeted one of his attacks on the probe from Tuesday, in which he called Speaker of the House Nancy Pelosi, D-Calif., as "Nervous Nancy."

Trump's tweets come hours before the Democratic-led House Rules Committee was expected to mark up and debate the eight-page resolution, backed by Pelosi. The full House is set to vote on the measure on Thursday.

For weeks, Trump and Republicans have decried the inquiry as illegitimate by attacking the process. Earlier this month, the White House insisted in a sharply-worded letter that the administration would not cooperate with the probe until the House formally voted to open an inquiry, though neither the Constitution nor the House rules require such a vote.

Lawmakers have also complained that Democrats have not released transcripts of closed-door depositions held in the impeachment inquiry so far. The resolution authorizes the Intelligence Committee to make those transcripts public with appropriate redactions.

The resolution also allows the president or his counsel to participate in impeachment proceedings held by the House Judiciary Committee, which has the authority to report articles of impeachment against the president to the full House.

If the president "unlawfully refuses to cooperate" with congressional requests, the chairman of the Judiciary panel "shall have the discretion to impose appropriate remedies, including by denying specific requests by the President or his counsel."

The resolution also instructs "certain committees to continue their ongoing investigations as part of the existing House of Representatives inquiry into whether sufficient grounds exist for the House of Representatives to exercise its Constitutional power to impeach Donald John Trump, president of the United States of America and for other purposes."

It resolves for "the Permanent Select Committee on Intelligence and the Committees on Financial Services, Foreign Affairs, the Judiciary, Oversight and Reform and Ways and Means are directed to continue their ongoing investigations as part of the existing House of Representatives inquiry into whether sufficient grounds exist" to impeach Trump.

The top Republicans on the three committees handling impeachment matters sent a letter to the House Rules Committee Chairman James McGovern criticizing the resolution ahead of its release.

Reps. Devin Nunes of California, Jim Jordan of Ohio and Michael McCaul of Texas said they were "disappointed" that Democrats were trying to "retroactively legitimize their illegitimate impeachment inquiry."

The White House denounced the resolution later on Tuesday.

"The resolution put forward by Speaker Pelosi confirms that House Democrats’ impeachment has been an illegitimate sham from the start as it lacked any proper authorization by a House vote," White House press secretary Stephanie Grisham said in a statement. "It continues this scam by allowing Chairman Schiff, who repeatedly lies to the American people, to hold a new round of hearings, still without any due process for the President."