The president and Republicans are up in arms, even though they've spent weeks calling for a vote in the House 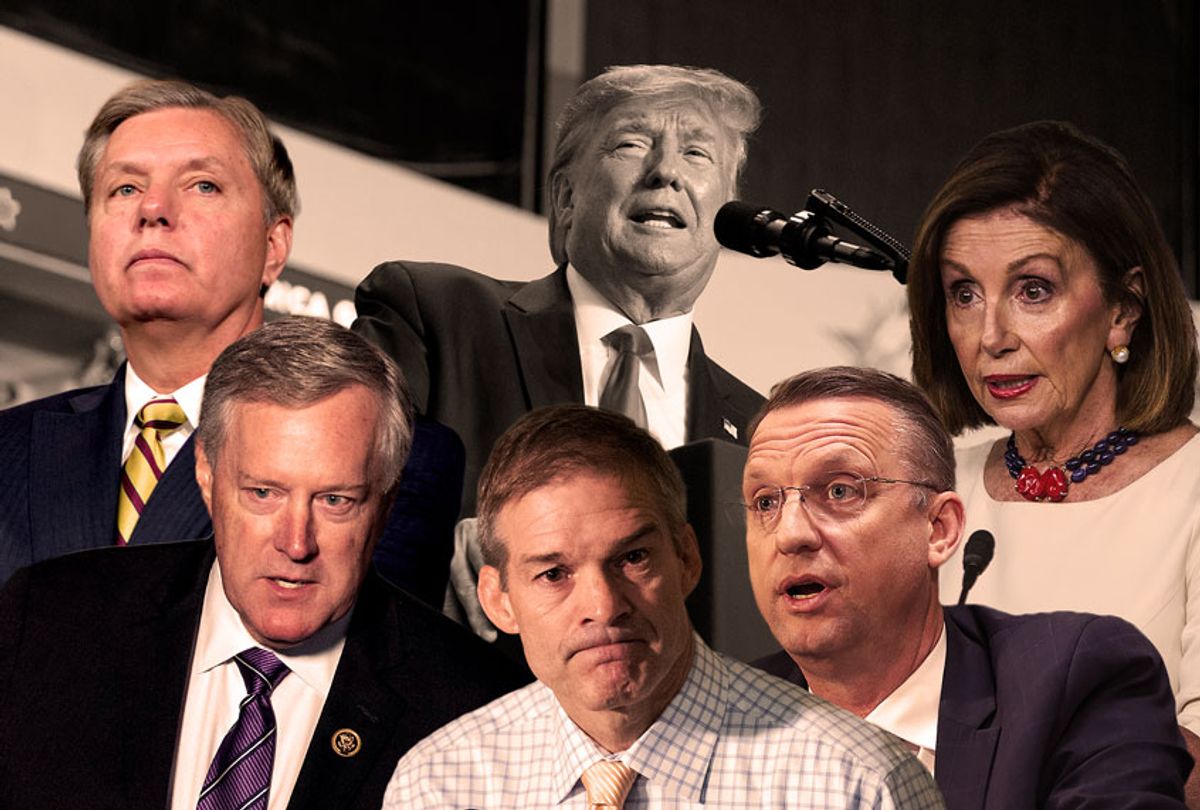 President Donald Trump and Republicans condemned the Democratic-led impeachment inquiry after Speaker of the House Nancy Pelosi, D-Calif., announced that the House of Representatives will take its first vote on the investigation and establish the rules for its next phase later this week.

Pelosi said Monday that the vote would "affirm" the existing probe and set rules for public hearings, granting due process rights for the president and his attorney. It would also establish how the transcripts from witnesses who have already testified in closed sessions would be released.

"We are taking this step to eliminate any doubt as to whether the Trump administration may withhold documents, prevent witness testimony, disregard duly authorized subpoenas or continue obstructing the House of Representatives," Pelosi said in a letter to her caucus. "Nobody is above the law."

The announcement, which suggests that Pelosi believes she has the votes for the resolution, could speed up a vote on whether or not to impeach Trump.

For weeks, Trump and Republicans have decried the inquiry as illegitimate by attacking the process. Earlier this month, the White House insisted in a sharply-worded letter that the administration would not cooperate with the probe until the House formally voted to open an inquiry, though neither the Constitution nor the House rules require such a vote.

"Nervous Nancy Pelosi is doing everything possible to destroy the Republican Party. Our Polls show that it is going to be just the opposite," Trump tweeted Tuesday morning. "The Do Nothing Dems will lose many seats in 2020. They have a Death Wish, led by a corrupt politician, Adam Schiff!" (Schiff, D-Calif., is the chairman of the House Intelligence Committee and is leading the inquiry.)

Trump attempted earlier Tuesday to claim hat the real scandal was Democrats’ alleged engagement in political theater as a means of distracting voters from his accomplishments in office.

"The Do Nothing Democrats are working hard to make everyone forget the Best Economy Ever, the monumental weekend raid, Tax Cuts, the Rebuilding of our Military, etc.," he wrote. "The Impeachment Hoax is a disgrace."

The president also renewed complaints that the whistleblower who sparked the inquiry, and whose identity has not been revealed to the public, has not testified before Congress. He went on to declare that the rough summary of his July 25 call with Ukrainian President Volodymyr Zelensky, released by the White House last month, revealed that he did nothing inappropriate. The call is at the heart of the inquiry.

"Where's the Whistleblower? Just read the Transcript, everything else is made up garbage by Shifty Schiff and the Never Trumpers!" Trump tweeted, referring to Schiff.

In another tweet, the president asked, "How many more Never Trumpers will be allowed to testify about a perfectly appropriate phone call when all anyone has to do is READ THE TRANSCRIPT!" He added, "I knew people were listening on the call (why would I say something inappropriate?), which was fine with me, but why so many?"

The president also quoted Fox News host Laura Ingraham saying she saw "no underlying crime" in the transcript of Trump's call with Zelensky.

"100% correct, and the Whistleblower disappeared after I released the transcript of the call," Trump added. "Where is the Whistleblower? That is why this is now called the Impeachment Hoax! The Do Nothing Dems are Doing Nothing!"

Trump also retweeted messages shared by Republicans, many of whom have attacked the impeachment process as unfair to the president.

Rep. Doug Collins, R-Ga., the top GOP member of the House Judiciary Committee, suggested Tuesday that any facts unearthed during the process are irrelevant, because the process itself is a sham.

"We can't trust Adam Schiff to find the basic facts when he can't even deliver basic fairness," Collins wrote. He attached a piece by Wall Street Journal columnist William McGurn, who accused Democrats of "trampling on impeachment norms."

In a separate tweet Monday, Collins commented on Pelosi's decision to force lawmakers to vote this week on the rules of the inquiry moving forward.

"Thank you, @SpeakerPelosi, for finally acknowledging the fact that you attempted to deceive the American people into thinking you were conducting a fair impeachment inquiry," Collins wrote. "Just one problem: It's impossible to undo 35 days of @RepAdamSchiff's secrecy, leaks, and innuendo."

Rep. Jim Jordan, R-Ohio, the ranking GOP member on the House Oversight and Reform Committee and a staunch ally of the president, argued Tuesday that formalizing the impeachment inquiry wild not make a difference among the president's supporters on Capitol Hill.

"I think the speaker is going to try to dress it up a little bit — ‘put on a little lipstick on the pig,’ as they say — and have this vote on Thursday. But it's not going to change anything," Jordan said during an appearance on "Fox & Friends," the president's favorite morning show. "Even if they try to change something to give a little bit of due process, we're all still going to vote against this, because this is such a sham. And it's been a shame form the beginning."

"Holding a vote to legitimize a behind closed doors process — without the right to confront the accuser and call witnesses on your behalf — does not fix the problem," he tweeted Tuesday. "It would still deny President Trump the rights every American is entitled to."

Graham accused Democrats on Monday of using a "sham process for the purpose of driving down Trump's approval rating."

"It should come to an immediate end," he added.