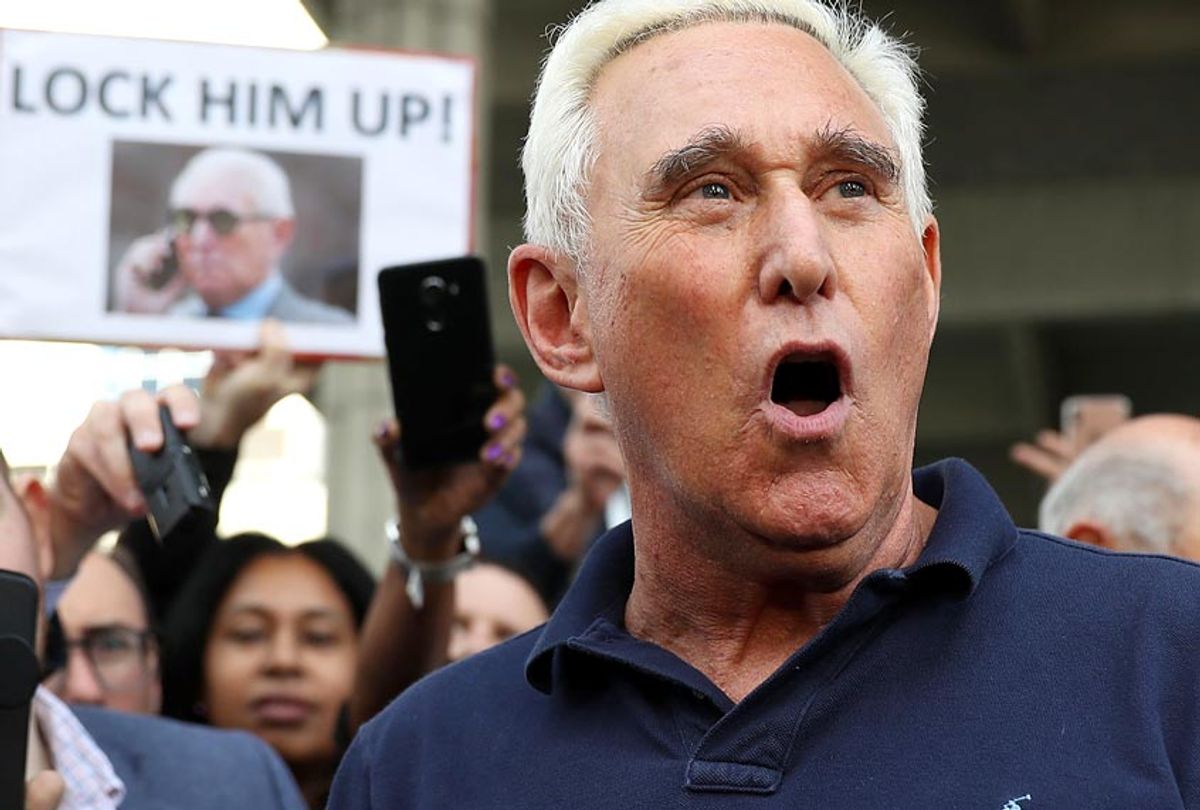 Roger Stone, a former advisor to President Donald Trump, speaks to the media after leaving the Federal Courthouse on January 25, 2019 in Fort Lauderdale, Florida. (Getty/Joe Raedle)
--

Democrats called for an investigation into Attorney General Bill Barr's intervention into cases related to associates of President Donald Trump.

Meanwhile, NBC News reported that seniors officials at the Department of Justice also quietly intervened last month to revise the sentencing recommendation for former Trump national security adviser Michael Flynn, calling for probation instead of the original six-month prison term recommended by prosecutors in the case.

The report came after all four prosecutors in Stone's case withdrew after the DOJ slashed its sentencing recommendation for the longtime Trump associate following the president's complaints on Twitter.

Prosecutors initially recommended seven to nine years in prison for Stone, who was convicted in November of lying to Congress, witness tampering and obstruction of justice. But Aaron Zelinsky and Adam Jed, who were members of former special counsel Robert Mueller's team, and fellow prosecutors Jonathan Kravis and Michael Mirando withdrew from the case after a senior DOJ official told the Associated Press that the department would reduce the recommendation. Kravis said in a court filing that he also "resigned as an assistant United States attorney."

The department filed a new sentencing memo Tuesday, though it did not recommend a specific prison term.

"It remains the position of the United States that a sentence of incarceration is warranted," the filing said, but argued that the initial recommendation "would not be appropriate or serve the interests of justice in this case" and "could be considered excessive and unwarranted under the circumstances."

"Ultimately, the government defers to the court as to what specific sentence is appropriate under the facts and circumstances of this case," the DOJ said.

The intervention came after Trump complained that Stone's recommended sentence was "disgraceful."

"This is a horrible and very unfair situation," Trump tweeted after 1 a.m. on Tuesday. "The real crimes were on the other side, as nothing happens to them. Cannot allow this miscarriage of justice!"

The president claimed that he "did not speak" to the DOJ, though he had the "absolute right" to get involved.

"I stay out of things to a degree people wouldn't believe," he said.

DOJ spokeswoman Kerri Kupec claimed the decision to intervene was made before Trump's tweets and said there was no contact between the White House and department leaders on the issue, according to ABC News. A DOJ official claimed to the outlet that the timing was simply "an inconvenient coincidence" and did not play a role.

According to NBC News, Barr's intervention was part of a recent move to "take control of legal matters of personal interest to President Donald Trump." NBC News, New York Times and The Washington Post reported that Barr's office and Deputy Attorney General Jeffrey Rosen ordered Stone's sentencing recommendation to be revised. Barr also intervened in Flynn's case and replaced a senior DOJ official who oversaw the Stone case and the investigation into fired former acting FBI Director Andrew McCabe, according to NBC.

"This signals to me that there has been a political infestation," NBC News legal analyst Chuck Rosenberg, a former U.S. attorney said on MSNBC. "And that is the single most dangerous thing that you can do to the Department of Justice."

"Attorney General William P. Barr's department has effectively gone rogue," former federal prosecutor Harry Litman wrote in a Washington Post op-ed. "The department's reputation for doing the right thing — already eroded by the abuses that have piled up since Barr became attorney general — is on life support. That is among the most odious achievements of the Trump presidency."

But Trump praised Barr on Twitter, doing little to clear doubts over the possibility of political intervention in the case of the man who had convinced him to run for president.

"Congratulations to Attorney General Bill Barr for taking charge of a case that was totally out of control and perhaps should not have even been brought," Trump tweeted Wednesday. "Evidence now clearly shows that the Mueller Scam was improperly brought & tainted. Even Bob Mueller lied to Congress!" Trump added, falsely.

Trump also revived some of his favorite anti-Muller attacks, falsely claiming that the investigation was "illegal" and run by "13 angry Democrats." Trump baselessly alleged "prosecutorial misconduct" and fired misleading attacks at Judge Amy Berman Jackson, who is overseeing the Stone case and several others.

Pelosi called for an investigation into the DOJ's actions Tuesday, arguing that Trump "engaged in political interference."

"It is outrageous that DOJ has deeply damaged the rule of law by withdrawing its recommendation," she said.

Schumer called for Michael Horowitz, the DOJ's inspector general, to investigate the intervention.

"This situation has all the indicia of improper political interference in a criminal prosecution," he said in a letter to Horowitz. "The American people must have confidence that justice in this country is dispensed impartially. That confidence cannot be sustained if the president or his political appointees are permitted to interfere in prosecution and sentencing recommendations in order to protect their friends and associates."

House Judiciary Chairman Jerry Nadler, D-N.Y., said that his panel would probe whether Trump and Barr had "overruled career prosecutors in order to help Roger Stone, who lied under oath on the President's behalf."

Sen. Kamala Harris, D-Calif., called on Senate Judiciary Chairman Lindsey Graham, R-S.C., to bring Barr in to testify so that "the American people can understand the Justice Department's decision to overrule its career prosecutors in this case."

Rep. Val Demings, D-Fla., a Judiciary Committee member who served as one of the House impeachment managers, called on the DOJ to turn over documents related to the intervention.

"The justice system must be totally independent from politics. The DOJ owes an immediate explanation for how this decision was made, what conversations occurred, and exactly who was involved," she tweeted. "DOJ and the Attorney General need to explain this, immediately, and offer documentary proof to back it up."