"You certainly talk a good game. You're 'concerned,' 'troubled,' 'worried.' But one thing you're not? Independent" 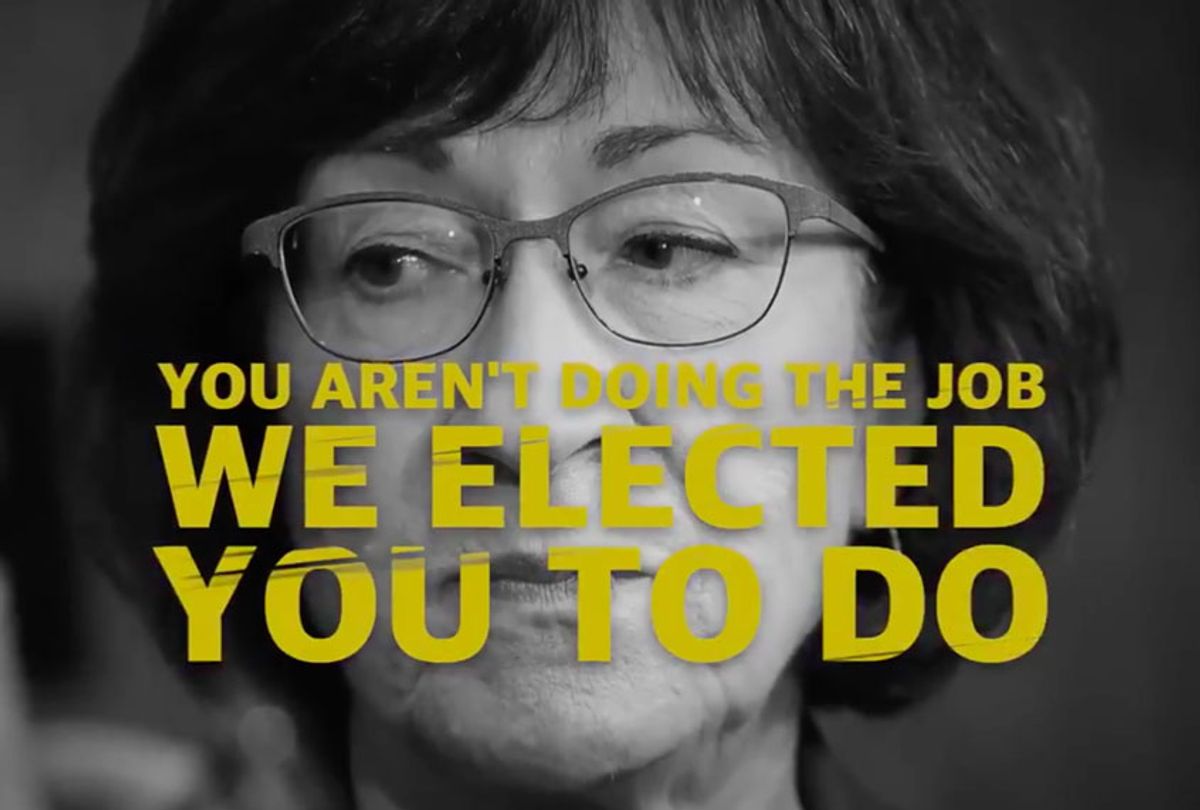 An anti-Trump super PAC founded by George Conway and a band of like-minded conservatives challenged the "independent" reputation of Sen. Susan Collins, R-Maine, in a blistering ad that demands she do her job instead of "covering" for the president.

"Sen. Susan Collins, you aren't doing the job we elected you to do," the spot begins. "While Mainers and the American people demand evidence, witnesses and answers to Trump's corrupt Ukraine scheme, you keep covering for Trump. Oh, sure. You certainly talk a good game. You're 'concerned,' 'troubled,' 'worried.' But one thing you're not? Independent. Madame Senator, this time a finger wag will not cut it. You're a senator, so act like it."

The spot continues, "You work from Maine — not Mitch McConnell — because Maine demands independence from our leaders. It's something we had with Olympia Snowe and Bill Cohen. Don't embarrass their legacy by protecting corruption. You aren't there to support corruption and loyalty to a political party. That's not the Maine way. That's the Trump way. Mainers demand independence, Senator Collins. We want a fair trial in the Senate and honest leadership. So either do your job, Susan Collins, or Maine will find someone who will."

The spot was created by the Lincoln Project, which explained in a New York Times editorial last month that it was founded by conservatives aiming to stop President Donald Trump while at the same time maintaining their right-wing identity.

"Over these next 11 months, our efforts will be dedicated to defeating President Trump and Trumpism at the ballot box and to elect those patriots who will hold the line," Conway wrote with fellow co-founders Steve Schmidt, John Weaver and Rick Wilson. "We do not undertake this task lightly, nor from ideological preference. We have been, and remain, broadly conservative (or classically liberal) in our politics and outlooks. Our many policy differences with national Democrats remain, but our shared fidelity to the Constitution dictates a common effort."

Conway, who is married to White House counsel Kellyanne Conway, has been a particularly outspoken critic of Trump during his presidency, including when he accused Trump of racism in July after the president said a quartet of non-white Democratic congresswomen should "go back" to their supposed origin countries.

"Telling four non-white members of Congress — American citizens all, three natural-born — to 'go back' to the 'countries' they 'originally came from'?" Conway wrote in an op-ed. "That's racist to the core. It doesn't matter what these representatives are for or against — and there's plenty to criticize them for — it's beyond the bounds of human decency. For anyone, not least a president."

Conway has also been critical of Trump's attempts to wriggle out of his impeachment.