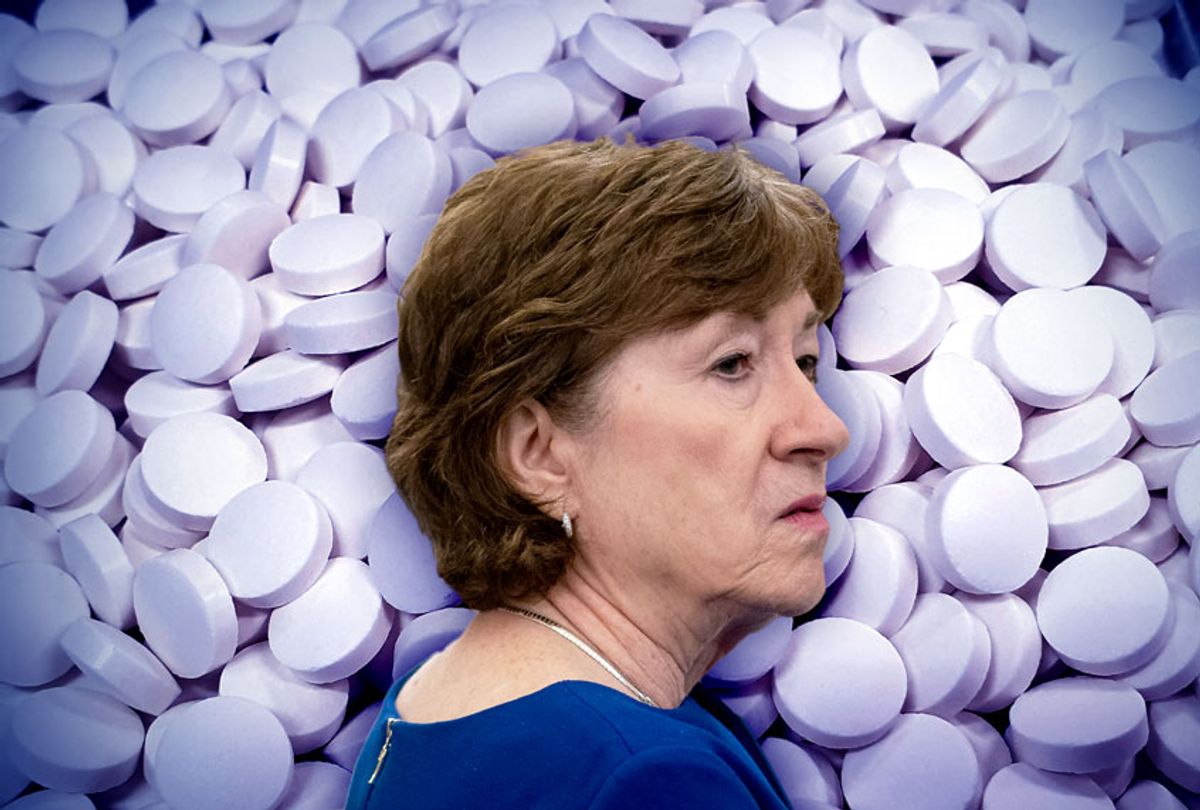 Sen. Susan Collins of Maine, a Republican facing a tough re-election battle this fall, revealed in financial disclosure forms that her husband invested in pharmaceutical companies that courts have held legally responsible for contributing to the opioid crisis.

Collins' husband, Thomas Daffron, appears to own up to $50,000 worth of shares in Johnson & Johnson, which he has held since at least 2012, the year they were married, according to her 2018 financial disclosure forms, which shared with Salon by American Bridge, a political action committee that lobbies for Democratic candidates.

The senator's financial disclosure records also show that Daffron had owned up to $30,000 in AmerisourceBergen, which he sold in 2013 at a profit.

It is not clear whether Daffron still owns the Johnson & Johnson stock. The most recent information is from the senator's 2018 disclosure, and Collins has not yet filed her 2019 forms.

Collins, who currently trails Democratic challenger Sara Gideon by 2.5 points in a RealClearPolitics average of polls, was required to file that 2019 disclosure by May 15 this year, but asked for and received a 90-day extension. It was the first time the senator had sought an extension on the annual filing since 2014, when she was last up for re-election.

But because Collins has not filed a periodic transaction report that shows her husband has sold his Johnson & Johnson stock, it appears that he held the stock at least until 2019.

The opioid epidemic has not spared Maine, where over the last five years at least 1,799 people have died of overdoses — an average of nearly one death per day.

Last year, following a one-year decline, overdose deaths in the state increased by 7 percent. According to local press, that spike was attributed to cocaine and methamphetamine as well as the synthetic opioid fentanyl.

Three Maine cities — Bangor, Lewiston and Portland — signed on to a national class-action suit against Johnson & Johnson, among a number of other opioid producers. The lawsuit was consolidated in an Ohio court, where Johnson & Johnson settled with two Ohio counties for $20 million. The fate of the Maine complainants is unclear.

Those three cities also sued AmerisourceBergen for its role in Maine's opioid crisis. That suit was later rolled into a nationwide class action.

AmerisourceBergen, one of the largest drug suppliers in the country, was listed by the Washington Post as one of the "top pill distributors" at the high point of the opioid crisis. Between 2006 and 2014, the company reportedly sold more than 13 billion of the highly addictive pills to pharmacies across the country.

Collins' campaigns have received more than $320,000 from the pharmaceutical industry since 2007, including a personal donation of $2,300 donation from Jonathan Sackler, the former vice president of Purdue Pharmaceuticals. Maine sued Purdue and the Sackler family in 2019 for their role in the opioid crisis.

Collins has also recently cast deciding votes in the Senate Committee on Health, Education, Labor, and Pensions (HELP) that killed amendments designed to strengthen support for victims of the opioid epidemic. In 2018 she voted against an amendment that penalized insurers that do not extend equal coverage to behavioral and addiction treatment, and she voted against a 2017 amendment that gave an additional $242 million to fight the heroin and opioid crisis.

Once perceived as a moderate, pro-choice Republican who was open to bipartisan compromise, Collins has become subject to increasingly intense criticism as her record drifted further to the right over the course of Donald Trump's presidenc.

A dark money group affiliated with Senate Majority Leader Mitch McConnell, R-Ky., and election strategist Karl Rove has spent at least $1 million on defending Collins' seat since January. Along with Cory Gardner of Colorado, Thom Tillis of North Carolina and Martha McSally of Arizona, Collins is widely seen as one of the most vulnerable Republican incumbents in this year's Senate elections.

Collins recently toppled McConnell in public-opinion polling as the most unpopular member of the U.S. Senate.