Maine women turn on Susan Collins: “Her ‘right’ and our ‘right’ aren’t the same thing anymore”

Collins used to vote against her party more than 30% of the time. That number has fallen to just 11% 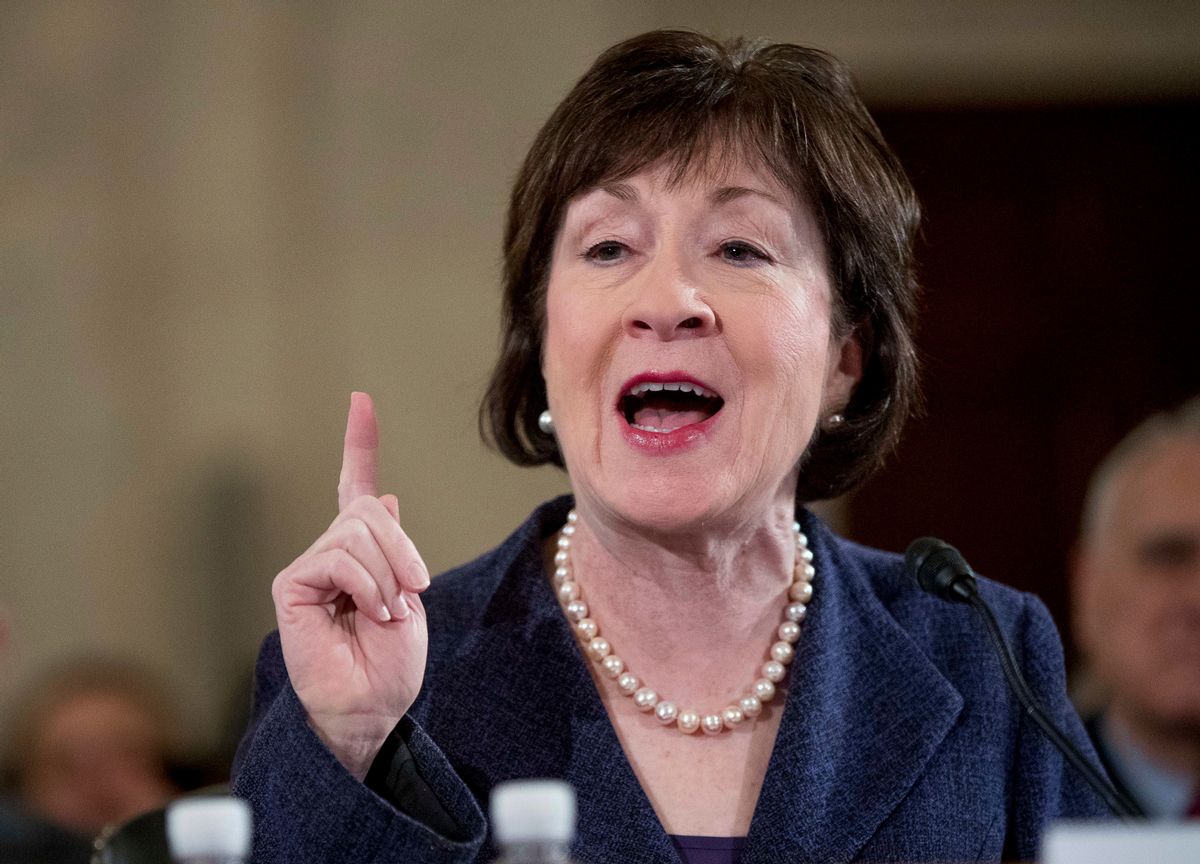 Maine is a uniquely women-dominated state. About 77% of women residents are registered to vote, and 65% of women voters turn out on Election Day, both the highest marks in the nation according to Politico. Collins won past elections with more than 60% support from women, but recent polls have found that more than 60% of women voters oppose her reelection. Her support among women voters under 50 has fallen to just 25%.

Collins' support for Supreme Court Justice Brett Kavanaugh made her a target of women's groups around the country, many of which raised millions to oppose her and have already launched six-figure ad campaigns against her in Maine. But an in-depth Politico Magazine dispatch months ahead of the election found while the "Kavanaugh vote angered" women in the state, "they perceive a larger trend — that Collins abandoned her native Maine in favor of standing with her GOP peers and funding from corporate donors."

Collins has rejected this argument. She told The Los Angeles Times earlier this year that she could not understand what was driving her plummeting poll numbers.

"I am doing exactly the same thing I've always done," she told the outlet. "I've always cast votes with an eye to how they affect the state of Maine and our country."

She similarly told Politico that she still views herself as very much "a centrist who believes in getting things done through compromise, collegiality and bipartisanship."

But Collins' drift to the right is undeniable. A decade earlier, she voted against her party 31% of the time, the magazine noted. Last year, that number dropped to just 11%.

"I think Susan has forgotten where she came from," Maine store owner Tricia Cyr told the outlet. "And I do believe she's trying to do everything right for the people of Maine, but her 'right' and our 'right' aren't the same thing anymore."

That could explain Collins' abrupt drop in popularity. She won her last re-election race with about 70% of the vote. But earlier this year, she was ranked as the nation's most unpopular senator, falling to a virtual tie against leading Democratic challenger Sara Gideon, the speaker of the state House of Representatives. The Cook Political Report now lists the race as a toss-up.

Though Collins' drift to the right has been gradual, it is undeniable. She opposed President Donald Trump's candidacy in 2016 and voted against his nomination of Secretary of Education Betsy DeVos and Republican attempts to repeal Obamacare. Since then, she voted to confirm Kavanaugh, supported the 2017 Republican tax cuts and voted to acquit Trump during his impeachment trial, arguing he had already learned a "big lesson."

Collins' shift has become the focal point of Maine politics in recent months. Republican state Rep. Heidi Sampson told the Politico that she has been inundated with questions and complaints about Collins at her own campaign stops.

"I get phone calls from upset people. I get emails from people. Constituents will come right up and complain about Susan to my face," she said. "People get really emotional."

An increasing number of voters have affixed "Bye-Bye Susan" bumper stickers to their cars as the election draws near. Those stickers gave way to ones reading, "Where's Susan?" when Collins refused to attend several town halls with constituents earlier this year.

Dan Shea, who chairs the government program at Maine's Colby College, told Politico that Collins' claim at independence is contradicted by her voting record in recent years.

"Every decision she makes seems to align her more closely with the Donald Trump and Mitch McConnell movement," he said. "Here in Maine, that's become the anvil around her neck."

Advocacy groups have taken note, as well. The League of Conservation Voters, which supported Collins in 2008 and 2014, have thrown their support behind Gideon, noting that Collins' record on conservation issues fell from 100% in 2008 to 21% since Trump took office.

"A member of Congress is expected to make up her mind about what is in the best interest of her constituents. Again and again during Trump's presidency, Collins has shown she's not willing to do that," Tiernan Sittenfeld, the group's senior vice president of governmental affairs, told Politico. "We have an extreme and radical president who has so little interest in what is good for places like Maine. We need a champion who will stand up to him."

The Planned Parenthood Action Fund, which supported Collins early in her Senate career, also endorsed Gideon this year, drawing accusations from Collins' office that the group is being run "by far-left activists."

"Maine women and Maine voters have remained consistent," she told Politico. "Susan Collins is just not the leader she once was, particularly when it comes to reproductive health and rights. In the past, we counted on Senator Collins to put women's health and well-being ahead of partisanship and political games, but we can no longer do so."

With waning support from past allies, Collins has increasingly turned to corporate donors. Her corporate donations have increased from 47% in 2002 to more than 61% this year, according to the report.

The donations have raised eyebrows in Maine, where the poverty rate is at 12%.

"I honestly don't recall a single time when she has been an advocate for the working poor," Hope Eye, a left-leaning voter that came to regret her past support for Collins, told the outlet. "She likes to claim her humble roots, but she consistently lacks empathy for people like me."

Cyr, the store owner, added that Collins has largely disappeared as her popularity dipped.

"She used to be a visible character who would visit our region and genuinely seem interested in what people thought," she said. "Honesty, I haven't seen her here in years."