Collins had an approval rating as high as 69% heading into her last re-election. It just fell to 37% 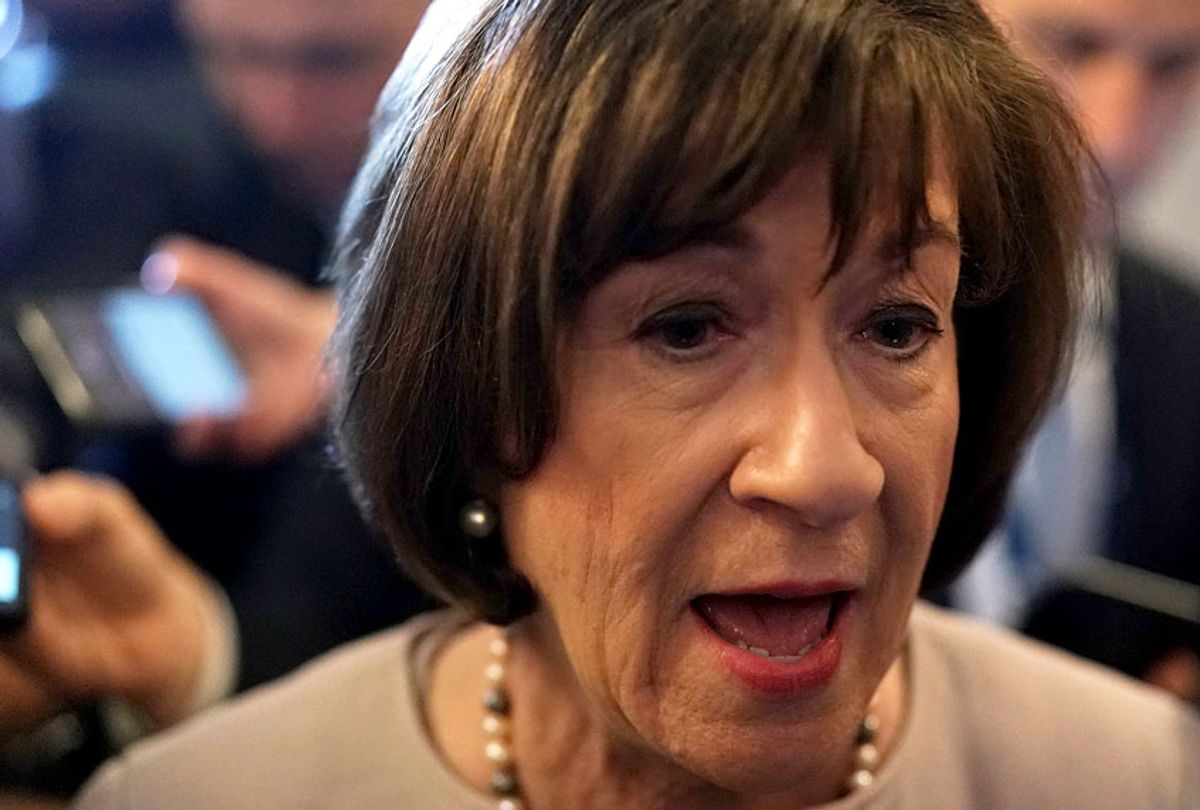 Sen. Susan Collins, R-Maine, continues to fall in the polls as she heads into her toughest re-election battle yet.

A new Bangor Daily News poll finds that just 37% of voters approve of the job Collins is doing — a five-point drop from the 42% approval rating she had in the last BDN poll in the fall. The number of voters who disapprove of her performance rises to 52%.

The drop came even as the number of Republicans who approve of Collins increases. Democrats and independents have soured on the longtime lawmaker, who ranked as the most unpopular senator in the country earlier this year.

Collins' fortunes appear to be tied to those of President Donald Trump, whom she voted to acquit in the impeachment trial after arguing the president had learned a "big lesson."

Collins has become increasingly tied to Trump after voting to confirm Supreme Court Justice Brett Kavanaugh ahead of the impeachment vote despite expressing concern over the sexual assault allegations against the judge.

The moves have cost Collins a lot of support after she built a brand as a moderate in an increasingly partisan Senate. Collins had an approval rating as high as 69% heading into her last re-election race, but that support has cratered, especially among women.

The votes have made Collins a top target for Democrats, and her Kavanaugh vote led to a crowdfunding campaign that led to a $4 million haul for her eventual challenger. Collins has been the beneficiary of millions in out-of-state money, too, raising just a fraction of her campaign funds from in-state residents.

Two recent polls showed leading Democrat Sara Gideon, the speaker of the state House of Representatives, with a narrow lead over the longtime incumbent. Collins won her last re-election race by more than 35%.

Collins told The Los Angeles Times earlier this year that she does not "even understand" why voters view her differently than in past elections.

"I am doing exactly the same thing I've always done. I've always cast votes with an eye to how they affect the state of Maine and our country," she said. "I think Mainers will look at my record, remember who I am and where I'm from."

But a Public Policy Polling survey found that a majority of Democrats and independents believe she voted to acquit Trump in order to protect him politically. And a Colby College poll found that Collins' Kavanaugh vote also cost her a lot of support among women and independent voters.

While her votes have drawn her closer to Trump, Collins has not received the same support from the president that other vulnerable Republicans heading into tough re-election battles have seen.

Trump has begun to use the coronavirus crisis as an excuse to provide special favors for endangered Republicans, sending hundreds of ventilators to Colorado and Arizona at the request of Sen. Cory Gardner, R-Colo., and Sen. Martha McSally, R-Ariz. Maine has received no such favors in spite of facing a severe shortage.

Collins' race was rated a "lean Republican" contest, but it has since moved to the "toss-up" category, according to Roll Call.

"Her personal and job approval ratings continue to deteriorate, and her advantage in ballot tests against Democratic state House Speaker Sara Gideon is slipping as well," Roll Call's Nathan Gonzales wrote. "Collins has disposed of credible candidates in the past, but this race will be more challenging."