Phyllis Schlafly's dead, but the Equal Rights Amendment may come back to life

Virginia going blue means there could be 38 states ratifying the ERA, reviving a long-dead feminist dream 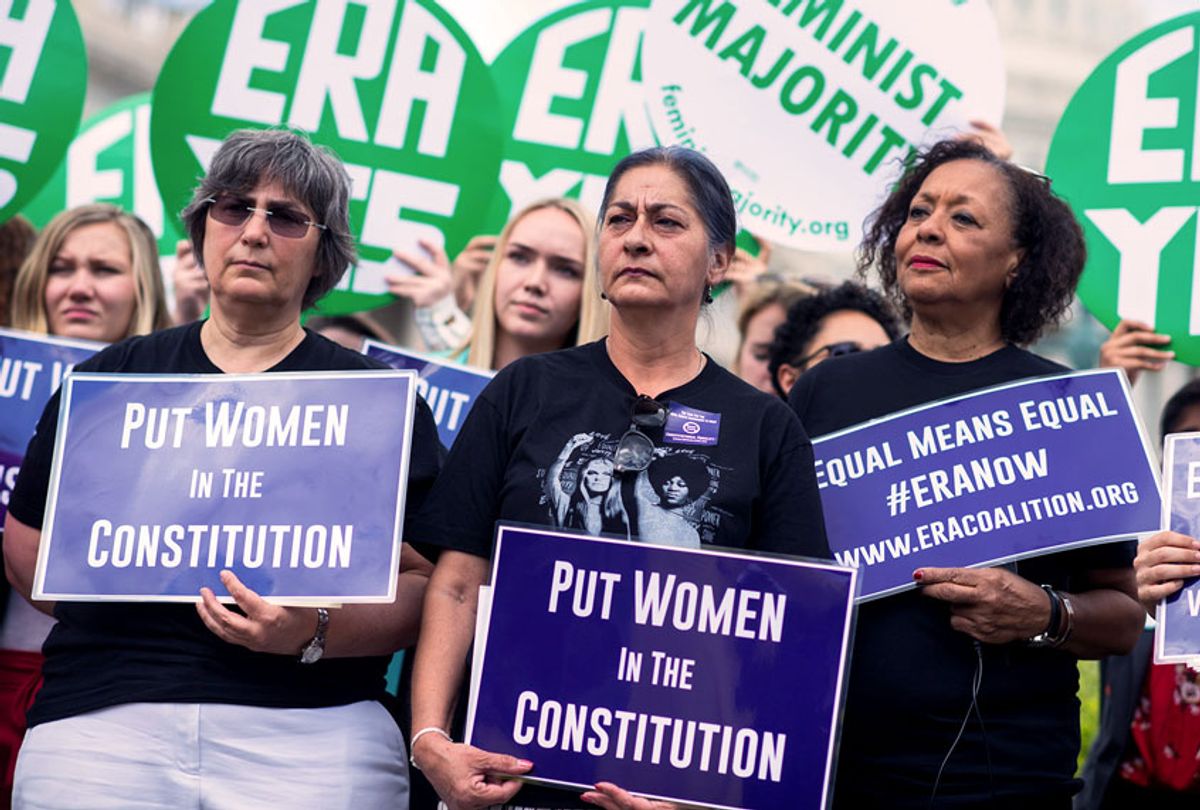 Donald Trump fought hard to save unpopular Kentucky Gov. Matt Bevin, so all eyes were on the election results in the Bluegrass State on Tuesday night. And there's no doubt that the likely win by Democrat Andy Beshear is big news, especially as it should mean relief for Kentuckians from Bevin's relentless assaults on health care access in the state. But the win for Democrats in Virginia may, in the long run, have an even bigger impact on national politics — and may even change the U.S. Constitution.

With a new Democratic-majority state legislature, Virginia is poised to be the 38th state to ratify the Equal Rights Amendment (ERA), which would, if it becomes part of the Constitution, mandate that equal rights under the law "shall not be denied or abridged by the United States or by any state on account of sex." The amendment was first proposed in 1923 and repeatedly introduced in Congress, only to be shot down by the nearly all-male body for decades. But in the 1970s, it was given new life by the rising feminist movement — now known as the "second wave" — that also ushered in legal contraception and abortion, as well as a multitude of legal reforms aimed at giving women full equality.

The ERA, however, was the biggest prize for second-wave feminists, and they very nearly got it. Congress approved it and sent it to the states, where it started to be ratified rapidly. But then a reactionary movement led by religious right organizer Phyllis Schlafly started scaring Americans with stories about how this amendment might legalize same-sex marriage or sending women into combat, both of which have since happened without the collapse of American civilization. In the face of this anti-feminist backlash, states stopped ratifying the amendment. Sen. Sam Ervin, a segregationist Democrat from North Carolina, had put an arbitrary time limit of seven years on ratification, and when that expired most assumed the ERA was dead.

In recent years, however, some legal scholars have begun to argue that Ervin's deadline isn't applicable or that Congress could extend it in order to make ratification stick. These complex legal arguments haven't yet had a chance to be tested because there weren't enough state ratifications. But that changed when two more states with Democratic legislative majorities — Illinois and Nevada — ratified the amendment in the past couple of years. If Virginia ratifies the ERA next year, there will be a legal showdown as feminist activists move to the next stage, which is trying to get it into the actual Constitution.

There's every reason to believe that Virginia will ratify the ERA —and soon. Democrats swept Tuesday night's election, seizing control of both state legislative bodies along with the governor's mansion (which they won in 2017). Many of these incoming lawmakers campaigned explicitly on passing the ERA. The only thing that has held them back was Republican control in the House of Delegates, which will be gone once the Democratic majority is sworn in next year.

All of which means there may very well be a national showdown, during a presidential election year, over the question of whether gender equality should be enshrined in the Constitution. Whatever the outcome, Democrats should welcome this fight. It will put Republicans in an incredibly tense situation, as the religious right still opposes gender equality as firmly as it did in Schlafly's day. So the party will almost certainly put up a stiff fight to stop this from happening.

(In a fantastic bit of timing, there will probably be an FX miniseries about the first fight over the ERA airing during the next year — starring big names like Cate Blanchett and Uzo Aduba — which means the issue will get even more attention.)

Republicans will also be worried about the optics of arguing against formal equality for women, especially as they're trying to re-elect a president who has bragged about sexual assault and is now being sued by a woman who says he raped her. Trump's election, along with the confirmation of Supreme Court Justice Brett Kavanaugh, also credibly accused of sexual assault, has gone a long way toward solidifying the Republican image as the Misogyny Party. Literally arguing that the Constitution should not recognize women's equality will make things worse for the party that only got 40% of women voters in the 2018 midterms.

It's clear enough how Republicans will try to pull this off: Bogus process arguments and fear-mongering about abortion. Both approaches, however, have pitfalls.

The process arguments, in which Republicans will pretend they'd be fine with a hypothetical ERA if only it wasn't for [fill in legal nonsense] will be transparent bad faith, and it's doubtful voters will be fooled. But the abortion hysterics that are bound to come out, with accusations that women are just a bunch of baby-killers and that all of this is about "abortion on demand," aren't likely to sell very well either.

Hyperbole about abortion was the main tactic that Republicans used in Virginia in the past few years, as the parties fought over the ERA. Anti-choice activists tried to dub it the "Everything Related to Abortion Act" and claimed it was a "smokescreen for abortion." (Which is, lest we forget, still considered a legal right in this country.)

All this rhetoric, however, serves to confirm what feminists have been saying for decades, which is that abortion opponents aren't motivated by a concern for "life," but by their opposition to women's equality. Which is why they are so aggressive in their fight against women's equality, and have been since the days when Schlafly argued that married women have no right to say no to sex, that sex education is about "teaching teenagers how to enjoy fornication without feeling guilty," and that sexual harassment occurs when "a non-virtuous woman gives off body language which invites sexual advances."

Republicans went hard on anti-choice rhetoric this year, in trying to drum up support and, no doubt, to recast their own misogyny as virtuous. In a rally in Mississippi last week, Trump literally (and let's be clear, quite falsely) said that Virginia's Democratic governor, Ralph Northam, had "executed a baby". In Kentucky, Republicans tried to make calling Beshear "Abortion Andy" a thing, because the likely governor-elect is pro-choice.

The result? Democratic wins in Virginia and Kentucky.

This shouldn't come as a surprise. Abortion may be an uncomfortable topic in a country that still has a lot of lingering shame around sex, but most Americans still believe it should be legal. Recent polling puts support for Roe v. Wade as high as 77%. The "fear" that women will get abortions — which women will do whether it's legal or not — is the best gambit that the opponents of women's equality have. And it sucks.

There's a lot that the 2020 election will be a referendum on, especially Trump's criminality and racism. Gender, however, may once again turn out to be a more salient issue than the male-dominated punditry imagines. American women are angry. They hit the streets in the Women's March in 2017. They protested the confirmation of Kavanaugh. More than half of women believe Trump should be both impeached and removed. There was already considerable reason to believe that women will come out to vote against Trump in large numbers. If Republicans actually choose to deny that women are entitled to equal rights under the law, women will be even angrier on Election Day a year from now.