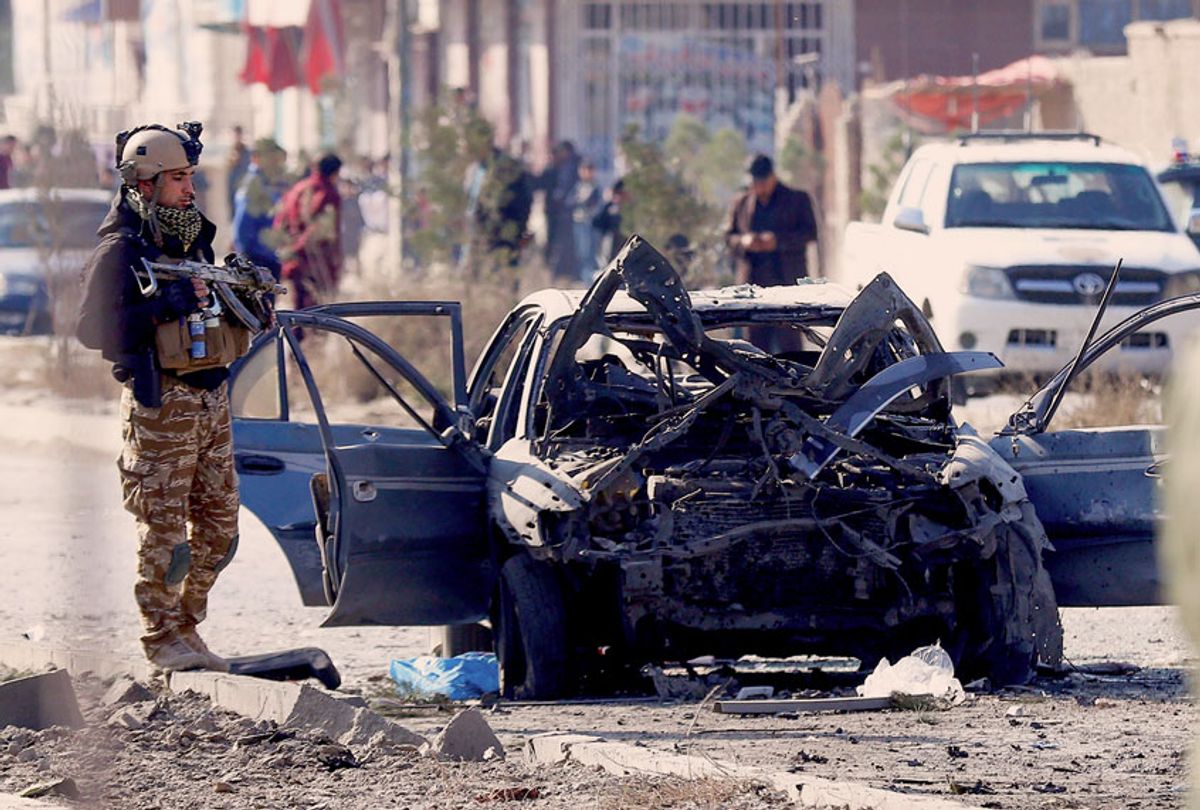 A soldier stands next to the site of a suicide attack in Kabul on November 13, 2019. - At least seven people were killed and seven wounded when a car bomb detonated during Kabul's busy morning rush hour on November 13, an interior ministry spokesman said. (Photo by STR / AFP) (Photo by (STR/AFP via Getty Images)
--

Two suicide bombings — one at the "Abbey" gate of Hamid Karzai International Airport, and the other at the Baron Hotel — were carried out by an ISIS-affiliated terrorist organization, reportedly killing 13 U.S marines and 50 Afghan's, this morning in Kabul, Afghanistan.

Abbey gate is described as a "meeting point" and has been one of the busiest points of entry during the evacuations these past few weeks, according to France 24 news. The Baron hotel — located a few blocks from the airport — is popular amongst Westerners. According to CNN and the Daily Mail, several Americans reportedly had rooms reserved at the Baron Hotel at the time of the bombing.

Islamic State Khorasan —  a splinter group of ISIS originating in the Khorasan region in eastern Afghanistan —  has claimed responsibility for the attack. The Pentagon has yet to confirm these reports.

ISIS-K was established in 2014 by Pakistani national Hafiz Saeed Khan. As the Islamic State lost territory in Iraq and Syria, the ISIS affiliate expanded operations in Afghanistan - growing in numbers and orchestrating dozens of terrorist attacks in the country —  including 77 in the first four months of 2021 alone, according to a UN report.

Although terrorist organizations, ISIS-K and the Taliban, are sworn enemies —  both fighting for control of the war-torn nation. ISIS-K denounced the Taliban's take over of Afghanistan, criticizing the group's hardline form of Islam.

The Taliban, who'd claimed to have the security situation outside of the airport "under control," condemned the "bombing of civilians," saying that this "evil cycle must stop."

Never thought I'd be typing this...
The Taliban "condemn the bombing of civilians at the Kabul airport," saying "the evil cycle must stop."
They have ample experience in perpetrating attacks, but do these leaders of the Emirate know how to deal with the aftermath of an attack?

President Biden was briefed in the Situation Room and is currently working on contingency plans from the Oval Office, according to CNN.