How to store potatoes so they last for months (yes, months!)

Plus, find out once and for all if it’s safe to eat sprouted spuds 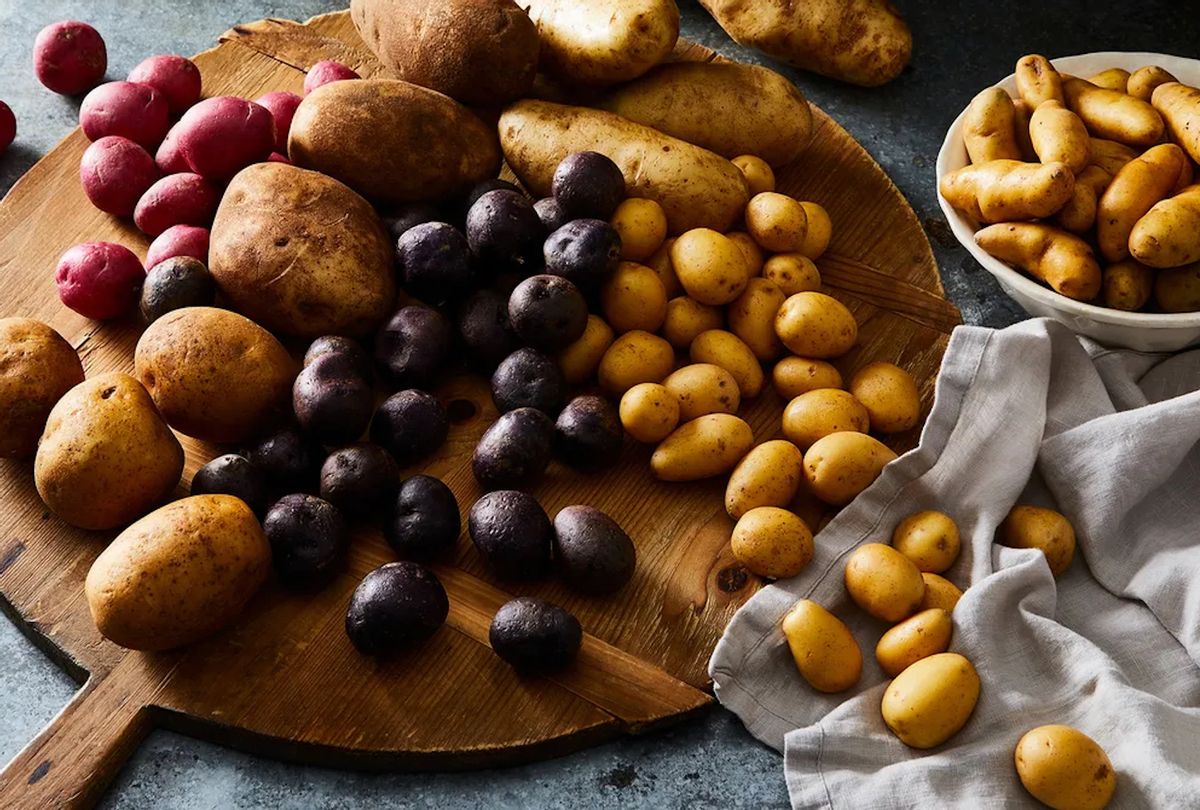 They're not always trendy, but they're dependable. They're comforting, versatile, and always crowd-pleasing. No, we're not talking about a pair of sneakers. We're talking about potatoes. This root vegetable has a pretty long shelf life, and even longer when stored properly. The key is to store potatoes in a cool dry place, like in the cabinet of a pantry, in a paper bag or cardboard box. It's important to keep potatoes at the cool, ideal temperature (but not, surprisingly, the fridge) to prevent them from turning green, getting soft spots, or pre-maturely sprouting. Once this happens, it's a sign that they're past their peak. But we'll get into all of that ahead a little later. For now, learn about the conditions that cause potatoes to ripen and how to prep them for long term storage.

The science behind the spuds

Though potatoes are certainly, well, cut off upon harvest, they continue to breathe (spooky, right?) and, in a way, live on the shelves of grocery stores and in your home. As oxygen from the environment combines with the sugars in patats, it gets respired from the roots as carbon dioxide and water. Storing potatoes in a cool, dark (but not forgotten) place hugely decelerates this inevitable decomposition, protects against sprouting, and, to some degree, sweetens the tubers.

It's also important not to store potatoes and onions together. Though they seem like two peas in a pod as they're often both called for in the exact same recipes. However, storing them both together actually does more harm than good. Both of these root veggies contain a lot of moisture, which can lead to faster spoilage. Combined, they produce an ethylene gas that will speed up the ripening process. Instead, keep them apart in an area that has good air circulation to maintain their long shelf life.

How to store potatoes

Although you shouldn't put potatoes in the fridge, potatoes will still keep the longest when stored in a cool, dark place — specifically somewhere that has a cold temperature of about 50°F and 90 to 95 percent humidity, like, you know, a temperature- and humidity-controlled root cellar. You know the one that's right next to your massive wine cellar? So just toss them down there, along with your turnips, onions, and carrots, and call it a day. They'll be good for weeks, if not all winter long.

Oh wait, I don't have a root cellar (do you?). Have no fear: Here are four of our best storage tips — root cellar not required — for happy, sweet, and dry taters.

1. Keep them out of the sunlight (but not out of sight)

Don't store potatoes out in the open on the countertop. Keep them in a drawer, in a basket, in a closet, in a paper bag, or in a bamboo vegetable steamer — anywhere that's dark — and they should last for one to 2 weeks. A clear plastic bag, like that kind that potatoes are packaged in, are actually not ideal for storing spuds. Potatoes are plants, after all. If they see sunlight, they will do their photosynthesis thing and turn green, and eventually wrinkle and rot.

And remember, out of sight, out of mind — keep them in a trafficked-enough part of the pantry so you don't forget about them.

2. Make sure they still have airflow

Either transfer your potatoes to a paper or mesh bag, like the Five Two Organic Cotton Reusable Produce Bags or a well-ventilated container. (They will be releasing carbon dioxide and water in the form of vapor, so things can get a little too damp.) If you'd like to keep them in the plastic bag they came in, make sure it's well-perforated and that the top isn't tightly sealed.

3. Don't store them next to your onions

We touched on this earlier, but let's get into the nitty gritty. It's tempting to toss both your potatoes and onions together in a basket in your pantry and be done with it — after all, they both like to be stored basically the same way. But resist temptation, because keeping them together (along with potatoes and avocados, potatoes and bananas, and potatoes and apples) might encourage your potatoes to sprout.

Even if you don't have a cooler storage location than your kitchen, take care to avoid the warmest spots in the room: Don't store your potatoes next to the oven, under the sink, or on top of the fridge.

When warmer than their ideal storage temperature, potatoes will start to sprout, but colder isn't necessarily better either. In On Food and Cooking, Harold McGee explains that when kept at colder temperatures (i.e. your refrigerator), "their metabolism shifts in a complicated way that results in the breakdown of some starch to sugars." This means potatoes stored in the refrigerator will taste sweeter over time, and when cooked they are more likely to come out an unappetizing shade of brown.

Signs that potatoes have gone bad

There are a few easy things to look for if you're wondering, "have my potatoes gone bad?" Mold, black spots, and soft spots are easily tells. Dr. Benjamin Chapman, an associate professor and food safety specialist at North Carolina State University, also recommends avoiding consuming potatoes that are wrinkled, soft, or shriveled. It's not necessarily harmful to eat, but think of it like eating any other rotten fruit, such as bananas or apples. The flavor and texture will not be at their best and it's just all-around unappetizing.

As for green potatoes, Dr. Chapman says that's a sign that the spuds have been exposed to too much light and will give off a bitter flavor and can even be irritating to the digestive system.

Now that you're a pro at storing potatoes, check out a few of our favorite recipes below.

The next time you need that satisfying, salty crunch of a potato chip, whip up a homemade batch using this tried-and-true recipe.

If over 70 glowing reviews are any indication, this is the best darn pan-roasted potatoes recipe out there — and it's extra easy, to boot.

Whether you're hosting Thanksgiving, a holiday party, a big dinner with friends, or just want something creamy and comforting all for yourself, these classic mashed potatoes are what you should make.

Put your knife skills to work on this hasselback potato skillet bake, which has all the crispy edges and crackly potato skin you could ever dream of.

A summer staple, this contest-winning roasted potato salad is packed with punchy garlicky flavor, as well as lemon juice and Dijon mustard.

There are so many different ways to make potato salads, but this particular recipe is about as classic as it gets. Red potatoes and hard-cooked eggs are tossed with mayonnaise and a touch of whole grain mustard, chopped dill pickles, chives, celery, a little squeeze of lemon juice...and that's pretty much it! Picnic, perfected.