How we got COVID: We did everything right — and still got breakthrough cases

I got married this month — but no, it didn't happen at the wedding. We've learned that this will be a long war 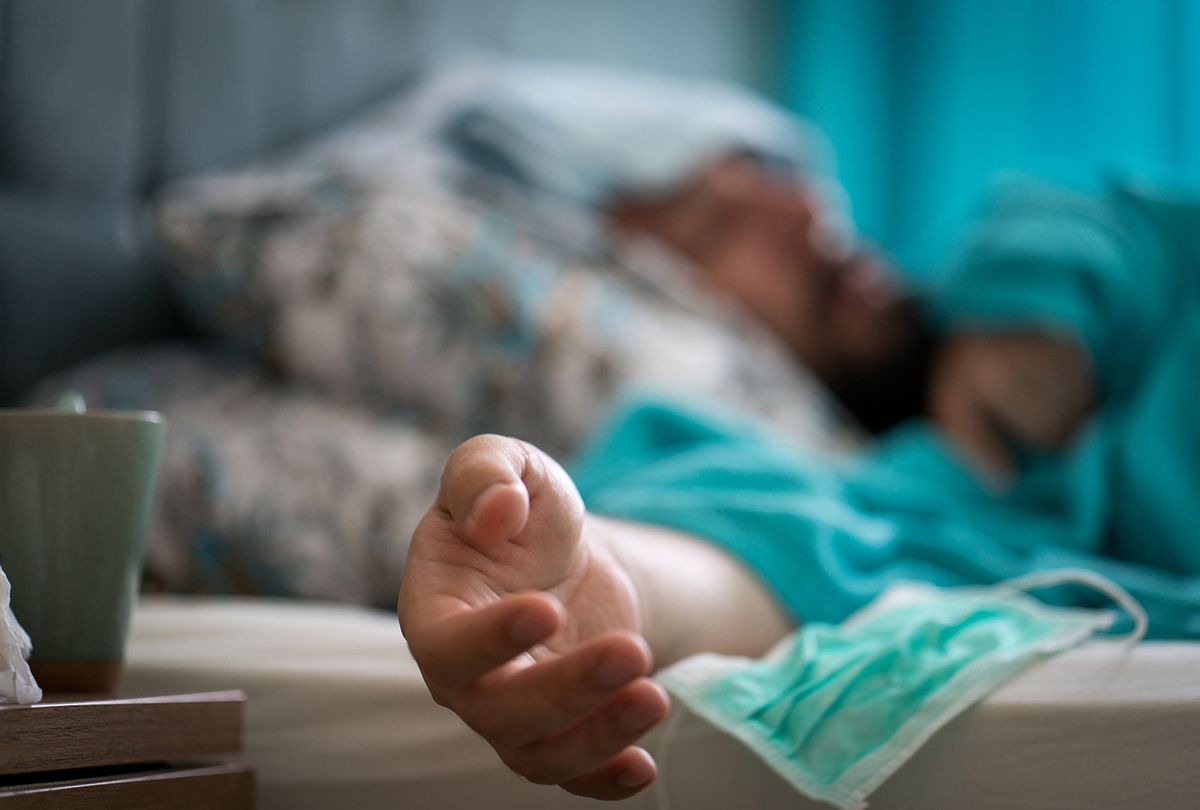 We've had quite an August. We got married, dodged a hurricane and came down with breakthrough COVID. While I would happily recommend the first two, I wouldn't wish the last on my worst enemy.

It hit completely out of the blue. One night last week, I fixed a nice supper — Italian sausage pasta with fresh tomato sauce — and sat down to eat and my appetite just disappeared. I didn't feel anything else, just a complete loss of the desire to eat. I didn't think much of it at the time. I'd had a late lunch — maybe that was it. So we finished dinner, watched an episode of something on Amazon and went to bed.

The next morning I woke up with a fever of 100.5 degrees. I was weak, having trouble breathing, headachy – it felt like a case of the flu, and not a light one. I took some ibuprofen and by noon my temperature was normal. But just to be on the safe side, I called my doctor and made an appointment for later in the day. Between the time I called the doctor and the time we left, I was too weak to drive, so Tracy drove.

The doctor took my vitals — which were normal — but she gave me a COVID test as a precaution. By the time we got home, the news was showing Hurricane Henri heading straight for us out here on the east end of Long Island. Full moon tide, three-to-five-foot storm surge, 75-mile-an-hour winds, the whole thing. We live only a few feet above sea level with one of our doors at the lowest point of the entire property.

Somehow, with a surge of adrenaline, we pulled ourselves together to prepare. We got our sump pump ready, and backed it up with a power inverter we could hook up to the car if the electricity went out.

We were already well-provisioned with bottled water and food, so on Saturday we settled down to wait out the coming storm that never came. Henri took a right turn at Montauk Point and headed off to New England and we were thankfully spared, because my COVID test came back positive right in the middle of everything.

How did this happen? For 18 months I've been writing about this disease and taking every precaution. Hell, I went out and got masks and latex gloves from the hardware store back in March of last year, before the CDC was even recommending them, and we wore them everywhere. I remember being the only person in a mask in the supermarket. We wore masks and gloves at the gas station, at the local deli, even walking down the street around other people, all of whom at the time were unmasked.

We didn't go anywhere. We didn't travel. We didn't have anyone over to the house. Like millions of others, we just hunkered down. Then in the spring came the opportunity to get vaccinated and we were among the when they set up mass-vaccine points out here. Although the vaccine gave us some sense of security, we still wore our masks everywhere we went indoors, following CDC guidelines.

We got married on Aug. 9, outdoors in the presence of a few of our friends. Because we were all vaccinated, we didn't wear masks, and afterwards we had dinner outdoors, well-spaced away from others at a restaurant. None of the people in our wedding party have come down with the disease, so that wasn't it.

The only time I didn't wear a mask was at a local outdoor farmers market. Once. But looking back, I remember being in line for a moment to pay, with a few people in front of me and behind me. No one at the farmers market was masked, so that must have been it.

Outdoors, for a grand total of maybe two minutes without a mask in the presence of others. If you needed evidence of the virulence of the delta variant, there it is.

Tracy's test was positive, of course, and both of us have been laid low all week. Lots of coughing, no sense of taste or smell, fatigue — and by this I mean hardly being able to move your arms and legs — shortness of breath, everything you would expect, and more.  But as we began to recover, it wasn't bad enough to necessitate another trip to the doctor, much less to the hospital, for either of us, thank goodness. We've been eating fruit and homemade chicken soup with rice, as much of it as we could stand. The symptoms started to subside a day ago, and we knew we were on the way back when we both laughed at something last night and at that moment realized we hadn't laughed for almost a week. Who knew that COVID took your sense of humor too?

I've been looking for a lesson in all of this beyond the obvious one — wear your mask even when you think you don't have to, even when you're around people you know are vaccinated. The only place we're not going to mask-up from now on will be inside the house and in our yard. That's how careful I think we're going to have to be.

We've known for at least a couple of months that being vaccinated won't protect you from contracting COVID, and I'm here to tell you that Tracy and I are walking, talking evidence of that. I've been recounting the statistics for this disease for more than a year, but never have those numbers seemed more ominous to me than when we became two of them. We have both been on the phone with the New York State Department of Health's contact tracing unit. They are incredibly thorough and efficient, so when I tell you that the national seven-day average of new cases is 156,300, I can assure you that number is as accurate as it can be, at least with respect to New York State. But the number that's truly staggering is the average number of daily deaths over the last week, which is 1,233 – with 2,210 having died on Thursday alone.

It now seems nearly beside the point to break down COVID statistics between vaccinated and unvaccinated people. It could be that whoever exposed me was vaccinated but showing no symptoms. I'm certain I was positive without symptoms for several days before I came down with a fever and was first aware that I was sick. I feel lucky that I didn't expose anyone during that time because I didn't go anywhere and I wasn't around anyone.

It was the politicization of this disease right from the beginning that has gotten us where we are, with statistics for new cases, hospitalizations and deaths approaching the highs they hit in January of this year. Insane opposition to imposing mask mandates in states like Florida and Texas and others are making things worse, and we're just getting started when it comes to the reaction that's sure to come with vaccination mandates by localities, businesses and entertainment venues. Irrationality has been the hallmark of this disease and it shows no signs of letting up.

I have to admit that during the past year I have joined in what Paul Krugman called in a recent column in the New York Times "the quiet rage of the responsible." But I must tell you that having contracted COVID, I have a whole new idea about what being responsible means, because it means us: Tracy and me. Even though we acted responsibly in getting vaccinated and wearing masks early on and throughout the pandemic, we still came down with this terrible disease.

I have reluctantly concluded that over time, practically everyone is going to get sick with the virus. It's going to be a part of our lives the way the weather is. We're going to have to learn that while there will be times it is warm and sunny, we're going to have to endure not just one winter of COVID, but many. COVID is well on its way to moving from pandemic to endemic.  It is going to be with us for a very long time. We have to come to grips with the fact that while vaccines will protect us, there is no immunity to this disease. Living with it will mean more than just taking care of ourselves. It will take respect for others and the patience and endurance of all of us.