How to welcome the Jewish New Year meat-free 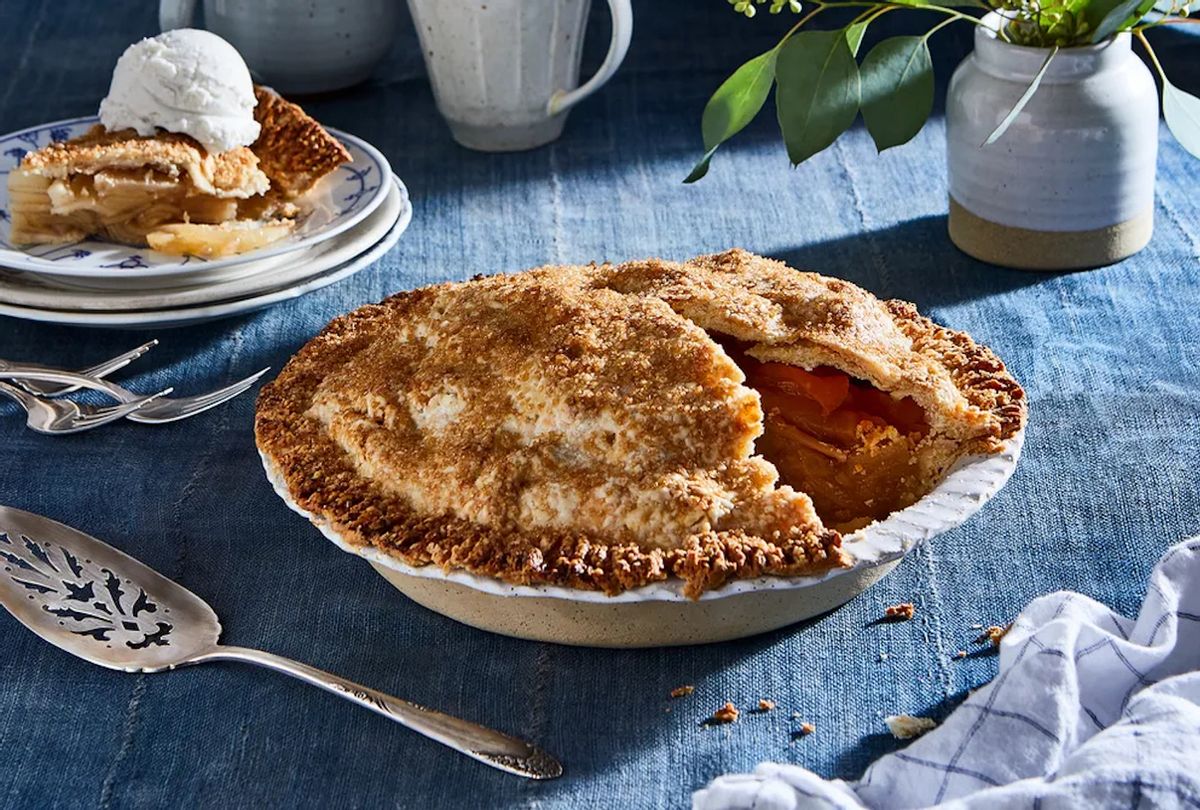 "Judaism right from the get go was supposed to be a vegetarian — or you could even say vegan — religion."

Jeffrey Cohan does not mince words, or meat, or any animal byproduct, for that matter. He is the Executive Director of Jewish Veg, an advocacy organization that provides support and community for people who are both Jewish and vegan. I quiver at his confidence.

For 20 years, I attended temple in Houston, Texas, tasting the flavors of my religious community: sandy Sunday biscuits, sinewy chicken in herby broths, the dark caramel of a brisket in late spring. And, like many Jews, I was taught that Judaism was not just a religion, but a culture — a culture made most accessible through rituals of eating.

So when my sister came out as vegan (we use lexicon with appropriate gravitas in my family), the question was not why, but how. How could she engage in ritual, a shared family practice of eating, with such an encompassing dietary preclusion?

At fall's muggy introduction, Jews celebrate the passing of a year and welcome a new one with a toothsome holiday called Rosh Hashanah. It is believed that on this day, God opens the Book of Life. Ten days later, on Yom Kippur, the book is closed and we bring to task our previous year's wrongdoings. These ten days are known as the Days of Awe.

It was on the first Day of Awe, in the middle of a Rosh Hashanah service, that Jeffrey Cohan and his wife stopped eating meat. "We were both carnivores when we walked into the synagogue and we were both vegetarians when we walked out," he tells me.

That was eleven years ago.

Since, Cohan transitioned from working at a local chapter of the Jewish Federation outside of greater Pittsburgh to his current position as the Executive Director of Jewish Veg, an organization whose mission statement reads: "We encourage and help Jews to embrace plant-based diets as an expression of the Jewish values of compassion for animals, concern for health, and care for the environment." They speak on college campuses, write articles for Jewish press, and give presentations at synagogues and community centers to champion the idea that Judaism has a plant-based diet at its core.

"What kind of God would it be who would want us to kill animals to sustain ourselves? That's not the type of God that's described in the Hebrew Bible [the Torah]," says Cohan who adopted a fully vegan diet upon his move to Jewish Veg.

In Genesis, the first book of the Torah, God tells the first man and woman, Adam and Eve: "Behold, I have given you every herb yielding seed which is upon the face of all the earth, and every tree that has seed-yielding fruit — to you it shall be for food."

Cohan points to these types of moments throughout the Torah, instances where God encourages humans to ingest plants and refrain from animal mistreatment. Collected, they bolster an argument for a spiritually mandated vegan diet. It isn't until later in the book (after humans insist) that God finally surrenders and permits them to eat meat. Cohan stresses the distinction between permission and mandate and holds steadfast to the ethic of tzaar baalei chayim, a prohibition on inflicting animal suffering mentioned in many Torah verses.

It's a similar ethic that guides Richard Schwartz who, in Cohan's words, "wrote the book" on the subject (his 1982 book is titled Judaism and Vegetarianism).

Schwartz's revelation occurred decades before Cohan's. As a math teacher at the University of Staten Island in the late '70s, Schwartz sought ways to incorporate current events into his lessons. He developed a curriculum that analyzed the environment through a mathematical lens. The study moved Schwartz as he began to unearth the intense ecological impact of factory farming on the planet's balance and he combination of ecological awareness with religious values spurred a lifestyle change.

This intersection found footing in tikkun olam, a Jewish practice of acting in ways that will most positively repair the world — a Semitic social justice. In no way do Jews lay claim over all acts of worldly do-goodery, but the lifestyle and belief system that so heavily guides Schwartz is deeply rooted in tenets of tikkun olam.

"As far as the world is concerned, I think it's the environment right now because if we don't avert this climate catastrophe, many climate scientists say that we could be very close — some even say we may have passed — the tipping point," Schwartz told me over a Google phone call from Israel where he now lives with his wife.

Many Jews adopt a vegan diet out of environmental concern. But the lifestyle, considered impossible in Biblical times and abberant just ten years ago, is now moving closer to center. It's a slow transition Schwartz has watched with impatience and anticipation.

Religious celebrations — what with sacred slaughters, a stress on all things kosher, ritualized consumptions — are a particular point of tension for Jews who eat vegan. But Schwartz insists that a "vegan diet can be consistent with Rosh Hashanah in the fact that there's the celebration of renewal, of the beginning of the world, God's creation."

Schwartz and organizations like Jewish Veg contend that veganism is inherently rooted in tradition. Instead, I saw a fissure. Jewish foods, the spiritual made edible that shapes so much of the way we commune, is better left untouched and unchallenged. Recipes beget heritage and loss and uproot. I'd easier sit through consecutive kol nidreis, the somber recitation of Yom Kippur vows, than offer an alteration to my nana's plum kuchen.

But if there's anything I stand by, it's that culture cannot be left static. It's fluid and transitive and begs modification. And with today's global environmental situation, changing the way we eat proves increasingly important. By no means am I the first Jew to wrestle with these concerns, to reconcile an environmental politic with matters of taste: Jonathan Safran Foer devotes an entire essay to the topic.

So how then could I honor tradition while honoring the lives of other living things? Can one eat with memory but not remorse?

The most important food eaten at Rosh Hashanah is honey. Jews dip apples into it, they drizzle it on cakes, my mom glazes carrots with the sweet nectar harvested from bee hives. But Cohan and Shwartz and many vegans eschew honey in the name of animal rights. As I prepared my Rosh Hashanah meal, I sought way to incorporate learned traditions, to welcome the new year vegan style. My inquiry pointed me in the direction of date syrup, a fruity reduction of that bready, biblical fruit that was said to carry all the sweetness of honey without the shame.

Along the way, I spoke to Jayne Cohen, a James Beard-nominated cookbook author, about Rosh Hashanah and the importance of tradition at the Jewish table. Holidays, she reminded me, are so important because of the memories they conjure, the smells and tastes and stories they make us remember, but also because of the practice of sharing those with others. "Cuisine," whether it be vegan or vegetarian, she mused, "really connects us not only to our traditions, but to our families."

So, while I simmered two pounds of dates in water, I thought back to what Cohen had told me, and FaceTimed my sister. We reminisced and talked animal justice and humane practice on the eve of a holiday we previously spent together. She watched as I pressed my goopy date stew through cheesecloth and reduced the liquid that emerged into a thick syrup. The result was earthy and saccharine, but not overwhelmingly so. It had a dark amber hue that FaceTime could hardly convey. I dipped in my finger and attempted to describe to her the taste. Without any honey, we welcomed the new year together from far away screens.

Honey-apple cake is a traditional Rosh Hashanah recipe but for vegan guests this apple pie incorporates the same flavors without the ingredients they can't eat. Once everyone at the table tastes the crispy, flaky crust and spiced apple filling, we doubt they'll miss the usual dessert mainstay.

Rosh Hashanah falls near the start of autumn, which means it's time to welcome hearty root vegetables like carrots and butternut squash. Here we've turned the abundant orange veggie into an ultra-comforting vegetarian Rosh Hashanah side dish.

Roasted carrots are one of our go-to side dishes for holiday dinners because they're easy to prepare and deeply flavorful, especially when they're rubbed with spices like cumin seeds and fennel seeds. Bonus: this recipe is even better when prepared a few hours in advance.

Dates are one of several significant foods to serve on Rosh Hashanah; they symbolize warding off enemies as the new year begins. For a super easy preparation of dates to serve with your holiday meal, sauté them quickly in good-quality olive oil and finish with a generous sprinkling of flaky sea salt.

Most matzo ball soup recipes call for a chicken broth base so for a delicious vegetarian recipe, make this chickpea-based soup with thick pappardelle noodles instead. It may just replace Bubbe's more traditional recipe...but we won't tell her.

Use dairy-free milk like almond or soy in place of regular milk for the dough, and an oil-based butterlike Earth Balance for brushing on top of each roll after it bakes. It's a vegetarian Rosh Hashanah side dish that everyone at the table will enjoy.

For a warm and cozy starter to your New Year's dinner, serve this vegan Rosh Hashanah recipe. It's a super smooth butternut squash soup that gets a hint of umami from white miso and creaminess from full-fat coconut milk.

Although honey is a traditional ingredient served with both sweet and savory dishes on Rosh Hashanah to symbolize the start of a sweet New Year, you can swap it with agave nectar to ensure that this breakfast granola is totally vegan.

You'll always find apples served for dessert on Rosh Hashanah and we love this vegan dessert for the holiday. Think of this recipe as a warm, spicy bar that's closer to a blondie than a brownie (as there are no chocolate or cocoa products). It's the sweetest way to welcome the new year.

Pomegranates are traditionally served on Rosh Hashanah since they're one of the seven species of Israel. They also signify the hope for many blessings in the year to come. Incorporate this important ingredient in this vegan salad recipe, which is hearty enough to be the main course or a colorful side dish for Rosh Hashanah.

Wake up to a sweet breakfast for Rosh Hashanah. Although vegan baking can present some challenges, recipe developer Gena Hamshaw says that "the rolls rose on schedule; they were pliable to kneading and rolling; they baked up to sweet, golden perfection." That's about as good as it gets in our book!

For a simple accoutrement to dessert and coffee, make these sweet syrupy plums. They come together in just 10 minutes and can be served however you please — hot, cold, or somewhere in between.