SB8 criminalized merely helping someone get an abortion after week 6. Now, abortion medication may be banned, too 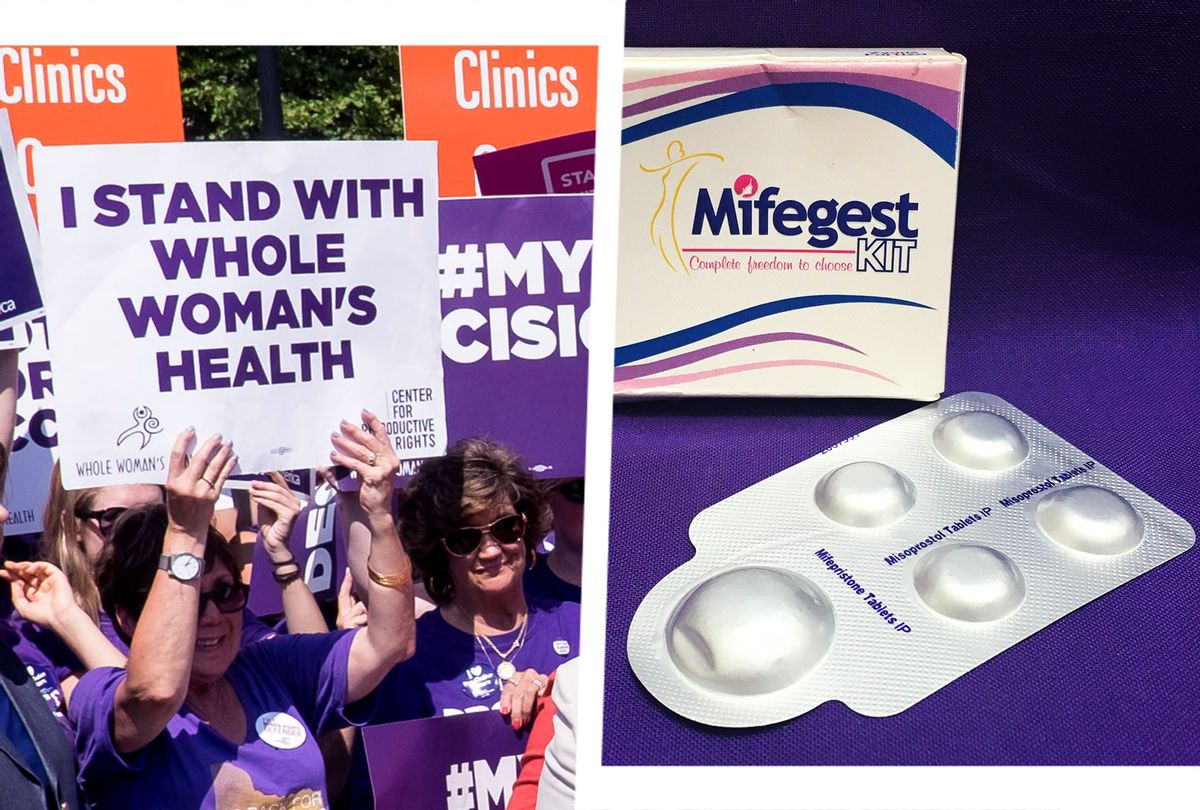 Everyone deserves access to reproductive healthcare on their own terms, including every safe method of abortion care. Whether an individual prefers to seek an abortion in a healthcare setting, at home, or wherever they feel most comfortable, we must fight to ensure that they have not just the right to obtain care, but the access to carry out that right with self-determination and dignity.

Our Latina/x communities have been using herbal teas and traditional remedies to end pregnancies for hundreds of years. It is no surprise that the use of misoprostol, one of the medications utilized in self-managed abortion today, was discovered as a reliable option in the 1980s by a network of women in Brazil, where abortion carries long prison sentences.

We have seen some incredible gains since with medications that allow folks to manage their own care. Medication abortion care is safe, effective, and has been FDA-approved for 20 years. But due to political gamesmanship, it continues to be subjected to restrictions that cause serious harm to people seeking care.

And nowhere is that more evident than Texas, currently the frontline in our fight for access. This year, lawmakers passed Senate Bill 8 (SB8), which bans all abortion as soon as cardiac motion can be detected in a fetus. That's at about six weeks, before many people realize they're pregnant.

Texas already has many baseless restrictions that add layers of barriers, including laws that force individuals to make multiple trips to a provider and undergo slanted counseling. Texas has a ban on telehealth providing medication abortion care, a ban on most insurance covering abortion – which means Texans must pay out of pocket – and a parental consent law.

But passing SB8 wasn't enough for the extremists. They called a special session to ban abortion medications, one of the safest and least invasive ways of ending a pregnancy.

We know our communities are hardest hit by these attacks on reproductive healthcare. Like with all other abortion restrictions, our communities will feel the brunt of this ban: due to structural inequities Latinas/xs, im/migrants, people of color, young people, people with disabilities, and people who live in underserved communities will be harmed simply for trying to take care of themselves.

Last year, we saw cynical politicians use COVID-19 as a ploy to close Texas's abortion clinics, and people seeking care were left in limbo for over a month while this battle was waged in court.

Last week, an appeals court upheld a Texas ban on the most common method of abortion care in the second trimester known as D&E, or dilation and evacuation. It is clear these extremists have no interest in protecting pregnant people's health, they simply want to outlaw abortion by any means.

Unless a coalition of abortion rights advocates and providers can block it in court, SB8 goes into effect on Sept. 1st. Although we have seen efforts like this before, SB8 is unique – it does not carry criminal penalties; instead, it creates a bounty to incentivize the public to file civil lawsuits against providers, as well as anyone who assists an individual getting an abortion.

That $10,000 incentive to sue a doctor, nurse, or clinic receptionist, as well as anyone who gives somebody a ride, watches their kids while they seek care, or helps raise money for an abortion, poses a direct threat to our communities in Texas.

At the National Latina Institute for Reproductive Justice, our folks have been on the ground in Texas for over a decade, fighting for access to comprehensive reproductive care with dignity and justice for all Texans. We will not stop fighting so that everyone has access to every safe method of abortion care, including the standard D&E method, medication abortion care via telehealth, and self-managed abortion care.

Texans, as well as everyone else living in our country, should be able to receive their abortion medications in the way that makes the most sense for them, whether at a health center, pharmacy, or delivered home.

We may not know what will happen in Texas after Sept. 1st, but we do know that FDA-approved abortion medications – whether prescribed by your provider or purchased from a reliable source for self-managed abortion care – are safe for ending a pregnancy.

The real harm is caused by the barriers to care and in the criminalization of our communities, not by FDA-approved medications that are safe, simple to use, and effective. We must ensure that Latinas/xs, people of color, im/migrants, and people with low incomes have access to all forms of abortion care and that we are not criminalized for taking care of ourselves and reclaiming control of our reproductive autonomy.

*Note: In order to be conscious of the importance of the full range of gender identities, I use gender-neutral terms throughout this article. "Latina/x" is a term that challenges the gender binary in the Spanish language and embraces the diversity of genders that often are actively erased from spaces. Due to the limitations of data collection, I use "Latina(s)," "Latino(s)" or "women" where research only shows findings for cisgender people; and I use the term "Hispanic" when the research cited uses the term.

Guadalupe “Lupe” M. Rodríguez is a scientist with an activist heart dedicated to seeing all people live in full salud, dignidad y justicia. She is currently the Executive Director of the National Latina Institute for Reproductive Justice (Latina Institute). Born in Mexico City, Lupe immigrated with her family to California to seek medical care for her brother and went on to earn a B.A. in Neurobiology from Harvard University A self-proclaimed disruptor with a passion for change, Lupe pivoted from science to pursue social justice policy work. She worked as Director of Public Affairs, and later Vice President of Public Affairs, at Planned Parenthood Mar Monte. She serves on the Community Advisory Board for the Center for Clinical Research at Stanford and was Chair of the Commission on the Status of Women in Santa Clara County and Treasurer of the Board of Directors for California Latinas for Reproductive Justice.