The best butter substitutes for baking (that actually work)

What could be better than butter? Turns out, these smart substitutes can come close 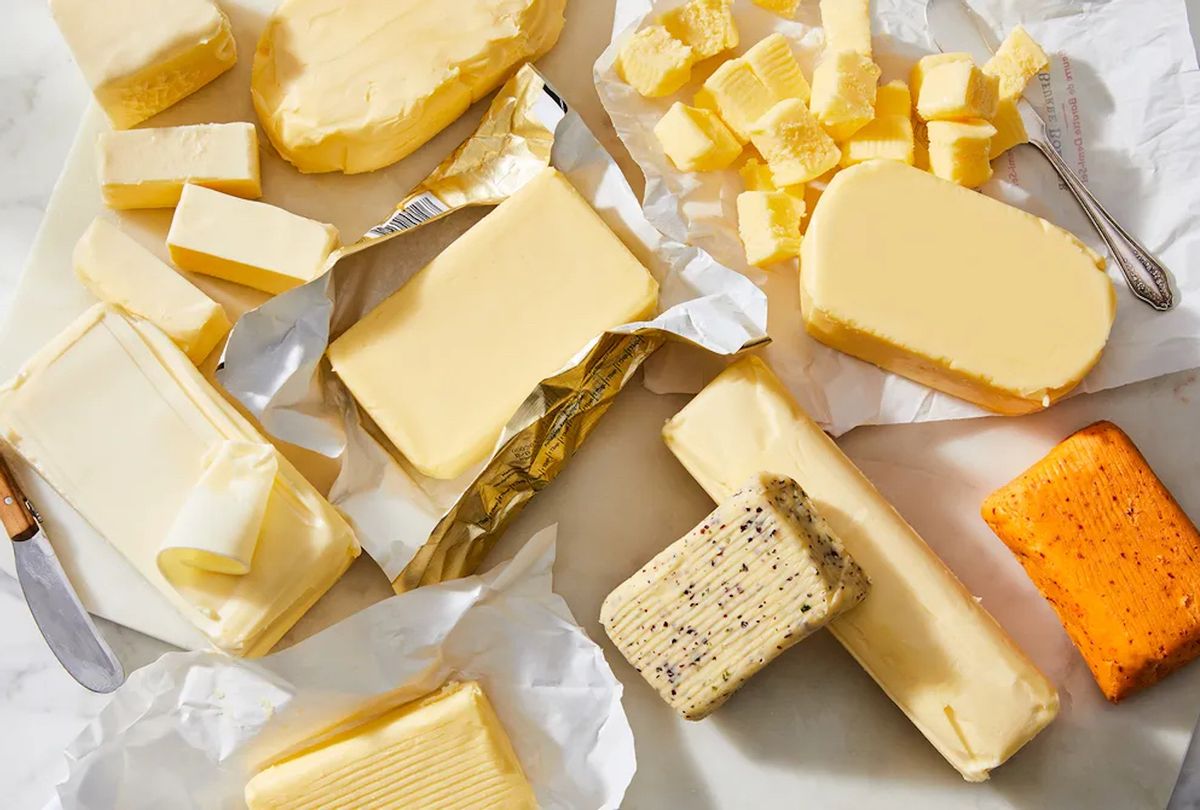 Let's start with the bad news. There is absolutely nothing on this earth that can truly replace butter. Not the most expensive extra-virgin olive oil, not the most convincingly golden popcorn topping, not even the most optimistically branded substitute spread. If it's not butter then yes, I can believe it's not butter. But if you've just flipped open the butter door in your refrigerator to find yourself staring into the void, don't despair. With some clever substitution techniques, you'll be baking, sautéing, or slathering toast without a stick in sight. From vegan butter substitutes like coconut oil, avocado oil, and mashed bananas to dairy products like ghee that work seamlessly as a butter alternative, these ingredients can easily replace butter in savory dishes and baked goods (and some even have some bonus health benefits to boot).

Butter, like most good things in life, is an emulsion. To make butter, all you need to do is agitate some cream enough, and the tiny droplets of butterfat will come together, separating from the watery buttermilk. The result is mostly butterfat, but not all. Butter is typically 15 to 30% water, with milk proteins working as an emulsifier (more on these later).

We'll also have to consider the way butter behaves when it's melted. It has a very low smoke point (about 200 to 250 degrees Fahrenheit), but before it starts smoking, it browns. The delicious nutty flavor of browned butter comes from the milk proteins and sugars in the butter undergoing Maillard reactions (aka, browning). This is one of the things that's just about impossible to replicate with other fats, though we can create Maillard reactions in other ways. Of course, you can use brown butter as is — drizzle it over sweet potato ravioli, mix it into shortbread cookies, or even fry eggs in it for breakfast. Sure, this isn't a substitute for butter, but it's a delicious alternative to regular butter.

To tackle the impossible challenge of replacing butter, we need to divide and conquer. Some alternatives work perfectly in flaky tarts while failing spectacularly in delicate creams (take lard or shortening, for example). Others are perfectly suitable for sautéing, but turn pastry dough into a soggy mess (say, olive oil). To cover butter's majestic range, each alternative oil or fat must play its part. Ahead, we'll get into the best butter substitutes based on certain types of recipes. Whether you're out of butter or lactose intolerant and looking for a dairy-free alternative, there are a dozen different products that work in place of butter.

Is butter really bad for you?

OK, we hate to go there. Maybe it's not great for your heart but it's great for the soul, so that counts for something, right? Yes and no. According to the American Heart Association, butter naturally contains saturated fat...and a lot of it. One tablespoon of butter contains, on average, approximately 7 grams of saturated fat. For context, the AHA recommends that individuals who need to lower their cholesterol should reduce their consumption of calories and fat to 11 to 13 grams of saturated fat per day (or two tablespoons of butter). Doing so may reduce your risk of heart disease and improve your overall cardiovascular health.

Of course you could be avoiding butter for another reason, like a vegan diet or an intolerance to dairy, or even just a dietary change. So even if you're not out of butter entirely but are looking for a healthier alternative to the creamy spread, here are our favorite substitutions.

Maybe you've run out of butter, but, searching frantically through your pantry, you stumble across a jar of ghee. Huh, you say. This is basically butter, right? Well, you're not entirely wrong. Ghee, a staple of Indian, Pakinstani, and Bangladeshi cuisine, is made by heating butter until it clarifies (meaning that the water and milk proteins separate from the fat), and then heating it some more until the milk proteins brown, imparting their heavenly, nutty aroma.

Ghee has, and it pains me to say this, some clear advantages over butter. Its smoke point is over 200 degrees higher (around 485 degrees Fahrenheit), so it burns less easily. Plus, it's basically shelf-stable, and its flavor is richer and, well, more buttery than butter. For frying and sautéing, ghee has the advantage. For sponge cakes and other baked goods that call for clarified butter, feel free to sub in ghee, anticipating a nuttier flavor. Or throw caution to the wind and make it into homemade puff pastry.

There are many vegan butters available on the market (and we've rounded up our ten favorites here). You can use vegan butters in most recipes that call for dairy butter in a 1:1 swap, whether baking or cooking. They have a spreadable texture and nutty, buttery flavor, though they can't be browned like dairy butter can. Generally, vegan butter are made with a base of nut and vegetable oils, such as macadamia, coconut, sunflower, or avocado oil. However, some vegan butters are nut-based and use ingredients like fermented cashews or coconut cream to create a creamy consistency and rich flavor.

I would argue that, as a rule, baked goods are mostly just a vehicle for butter, except for when they are a vehicle for chocolate. But that's not to say that baking without butter is a hopeless endeavor. In fact, some of my favorite sweets are exceptions to this rule.

Like butter, coconut oil is a hydrogenated fat with an assertive flavor. Use it to make a tempting pie dough, or in this decadent, dairy-free carrot cake. Just remember that it's flavor will shine through wherever it goes, and it tastes nothing like butter.

Samin Nosrat is obsessed with oil cakes, and you should be too. Because they are made with un-hydrogenated fats that are liquid at room temperature, they have a moister, tenderer texture than butter cakes. Try David Leibowitz's genre-defining ginger cake with peanut or vegetable oil, or crack out the EVOO for this delicate pound cake with sherry.

Divisive in its highly un-kosher, un-vegan, unapologetically porky nature, lard makes, in my humble opinion, the most deliciously flaky Hong Kong egg custard tarts. But it has a couple other considerations, aside from flavor and provenance. It tends to produce more crumbly, less puffy pastry than butter, partly because, unlike butter, it doesn't contain much water to steam and push apart the layers during baking.

Another thing to keep in mind: At room temperature, butter is solid; but it melts at 90 to 95 degrees Fahrenheit, dissolving on your tongue. Lard, however, melts at a much higher temperature, and leaves a residue in the mouth some find unpleasant.

Just the idea of hot, foaming butter sizzling in a skillet makes my mouth water. But the fact is, more often than not I reach for the olive oil when sautéing vegetables and proteins. There are two main considerations here.

The first, of course, is flavor. If you're cooking French, don't swap sesame oil in for your beurre blanc. In fact, don't make beurre blanc, or anything else defined by the particular flavor of butter. Instead, consider the cuisine and core ingredients of the meal you're preparing, and choose cooking fats accordingly.

The second thing to consider is heat. Some fats, like butter, have relatively low smoke points, making them unsuitable to high-temperature frying. Others, like ghee or vegetable oil, can get ripping hot without a wisp of smoke.

It's not the flashiest, but sunflower oil can put a sear on steak faster than butter can, and it can do it without the risk of burning.

A good olive oil is spicy, fresh, and voluptuous. It can add layers of flavor to a braise, or brighten sautéed greens. I use extra-virgin for everything, though some would be horrified to hear it.

Duck fat is delicious. Roast potatoes in it, of course, but also use it to confit everything from duck legs to arctic char. Or go really wild and bake it into savory cookies.

Growing up in a vegetarian Jewish household, I never ate schmaltz (rendered chicken fat), but I did hear about it. It was spoken of in hushed tones, an unspeakably delicious relic of our history. Even if you're not vegetarian, it may be difficult to find schmaltz for sale. It's not fashionable anymore. But it is still delicious.

And if you've taken the trouble to skim some from the stockpot or out from under your roast chicken, do not throw it out. Instead, mix it into your matzo balls, or sizzle some chicken livers and make your bubbe proud.

One of the greatest pleasures of butter is slathering it over bread. People think buttered toast is nice, but only because they haven't had the courage to spread a serious slab of cold butter on bread, and slide their teeth through it.

Before you argue, Via Carota, arguably the best restaurant in Manhattan, has nipped this dispute in the bud by topping (room temp) crostini with massive quenelles of butter, draped with anchovies. It's pretty close to perfect. But here I am getting distracted. Without butter, we have a few options to elevate our bread consumption.

The best thing to do to bread other than to slather it in butter is to dip it in really, really good extra virgin olive oil. In fact, if you have a truly incredible olive oil, be sure to do this, and promptly — olive oil deteriorates as it ages.

Putting avocado on toast has become something of a millennial pastime, and for good reason. If you can get your hands on a good avocado, it offers much the same pleasure as well-buttered bread. The unctuous fattiness, the silky texture, the perfect, yielding bite. In fact, the experience of good avocado on toast has so much in common with butter on bread it might just make you miss it more.

Other butters, nut and not

Peanut, almond, cashew, maple — nut butters may have butter in the name, but they have little to do with the real article. What they do all have in common is that they're delicious on bread. And sometimes, it's better to make a strong pivot than to go with any kind of imitation.