English, Persian, and hothouse cucumbers share the spotlight in these salad recipes 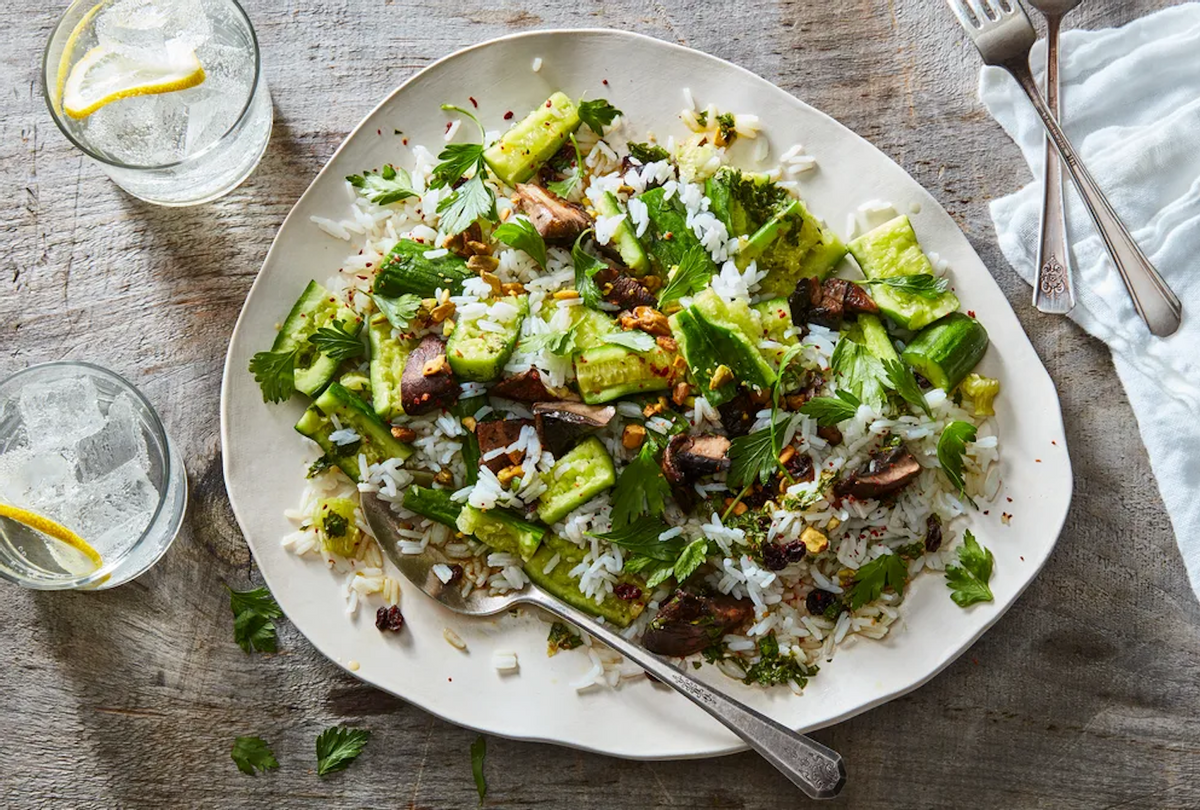 We love 'em for snacking, or slicing them thin and using them to infuse water so it makes it feel like we're at a spa. But another way to enjoy cucumbers is in the form of a crisp, cool cucumber salad. Keep things simple by tossing them in herby yogurt sauce, mixing them with mozzarella and chickpeas for a hearty twist on a Panzanella salad, or giving them some kick with a spicy, dry-fried combination of Thai dried chile peppers, jalapeño peppers, and Sichuan peppercorns. If any of those ideas sound appealing, you're in luck. We're sharing 16 different cucumber salad recipes that are crisp and refreshing (even when they pack in some heat).

1. Cantaloupe and Cucumber Salad with Basil and Feta

This simple summery salad isn't too fussy or over-the-top, which is for the best. The low-key method really allows the melon and cucumbers to shine alongside feta cheese and fresh basil. Just be sure to use really good quality ingredients (down to the balsamic vinegar and flaky sea salt) so that everything is on its A-Game.

Joanna Gaines can certainly fix up a central Texas house like nobody's business. But she's also a whiz in the kitchen. This cucumber salad is a hybrid of American and Korean flavors that pair super well with her mom's recipe for Bulgogi, a beef tenderloin that has been marinated in a sweet combination of brown sugar, soy sauce, sparkling dessert wine, and green onions.

Magic spice may sound like something you'd find in a forbidden forest, but really it's just a basic (but potent!) blend of dark brown sugar, smoked paprika, garlic powder, cayenne pepper, and celery seeds. It brings a serious punch to thin slices of cucumbers.

After quickly marinating cucumbers in rice vinegar and sugar, they're topped with a crackling combination of Thai dried chile and jalapeño peppers, plus Sichuan peppercorns, for a powerfully flavorful side dish.

It's super crispy and crunchy, but it's also the greenest salad in all the land, thanks to a beautiful pairing of cucumbers, kiwis, Asian pears, and the always-chic French breakfast radish (which is pink, not green, but you get the idea).

"The crisp, cooling texture and flavor of the cucumber make this a great salad for sharing at a late-summer barbecue, where it can serve as a side dish or main," writes recipe developer Daniel Shumski.

If you've grown tired of potato salad, make this creamy cucumber salad recipe in its place. The ingredients list will look pretty familiar (mayonnaise? Check. White vinegar? Check. Plenty of herbs? Check. Greek yogurt? Sure, why not!), with a few fun extras like feta cheese and shallots.

8. Seaweed Salad with Kale and Cucumber

If you've only ever tasted seaweed in the form of dried sheets rolled into bite-sized pieces of rice and fish, this salad brings it all together with kale and cucumbers for an umami-packed side dish.

The crunchy texture and light, bright anise flavor of fennel is incredibly lovely alongside cucumber. But wait, hold up! There's some contrast from a spicy vinaigrette that gets its heat from red pepper flakes, rice vinegar, and sesame oil.

Dress up cucumbers and radishes with a harissa-yogurt sauce, fresh parsley, and crunchy sesame seeds in this side salad recipe.

"A colorful update to the Caprese — which typically pairs umami-rich tomatoes with mild, fresh mozzarella — this salad adds some crunch in the form of cucumbers and boosts the refreshment factor with fresh mint and parsley," says our editorial team.

Call it a slaw, call it a salad, call it pickled vegetables, or just call this recipe straight-up delicious.

Take the road less traveled by with this summer salad that offers lots of room for imagination. The base features seasonal veggies that are at their best in August (looking at you, tomatoes and corn) but you can also incorporate whatever is in season and looks really crisp and colorful.

Like the previous cucumber salad recipe, this one is also designed to use up whatever is in your fridge. Recipe developer Sara Jenkins chose cucumbers, green beans, fennel, and scallions but there's certainly no harm in leaving one or two of those veggies out (or adding a few more in).

We're all about repurposing last night's leftovers for today's lunch or dinner, and recipe developer Hetty McKinnon does that beautifully with this family-friendly sushi cucumber salad.