Beyond Afghanistan: Biden turns the page on war — and the U.S. enters a new era of history

While pundits and politicians squabble over the past, Joe Biden is trying to redefine America's role in the world 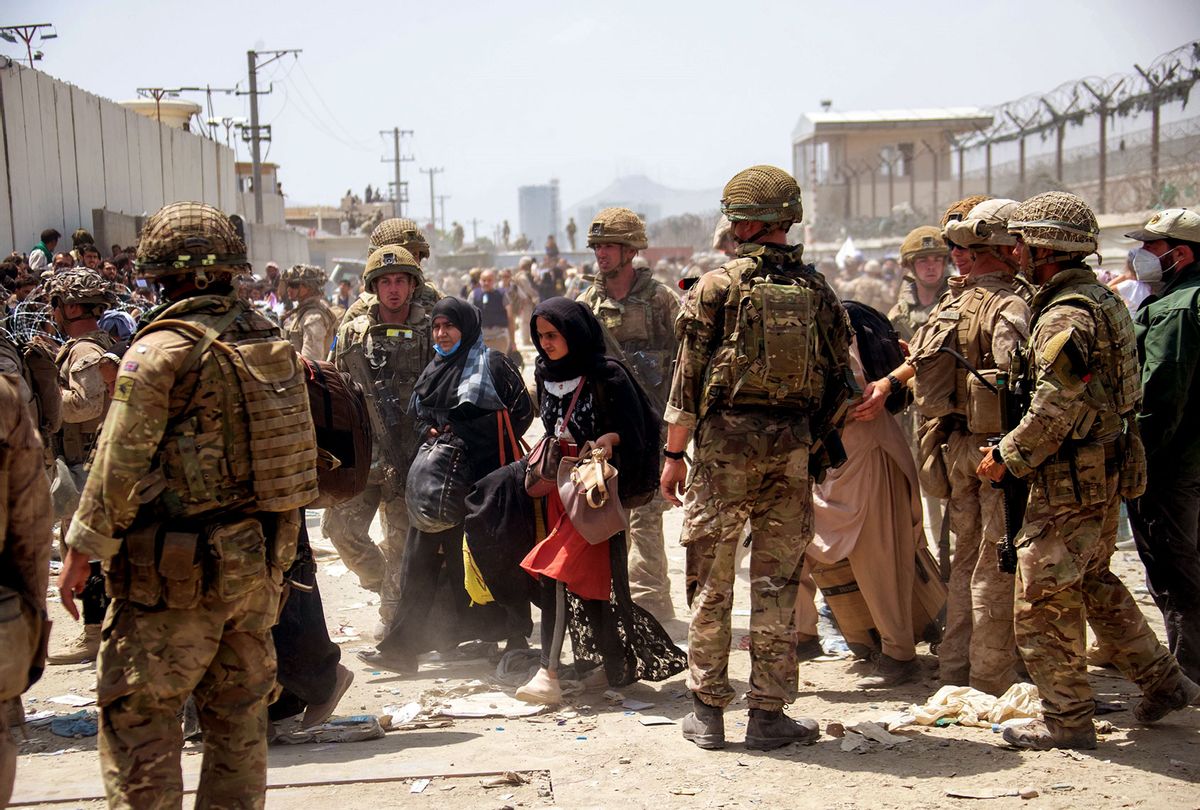 In this handout image provided by the Ministry of Defence, the British armed forces work with the U.S. military to evacuate eligible civilians and their families out of the country on August 21, 2021 in Kabul, Afghanistan. British armed forces have been evacuation UK citizens and eligible personnel out of the Afghan capital after the Taliban took control of the country last week. (MoD Crown Copyright via Getty Images)
--

While the pundits and politicians continue to argue about President Biden's decision to end the two-decades-long U.S. military involvement in Afghanistan, many of us are missing the bigger picture — and a very important point:

What is the future of our involvement in the Middle East — and by extension the rest of the world?

Many have tied themselves into a Gordian knot trying to decide the righteousness or the stupidity of Biden's decision to leave Afghanistan, how it was handled, how it does or doesn't expose our isolationist tendencies, who was affected and how it exposes our weaknesses. It is clear Biden has moved on and is leading us into uncharted waters. Buried deep in his speech Tuesday was this: "This decision about Afghanistan is not just about Afghanistan. It's about ending an era of major military operations to remake other countries."

That statement may make the military industrial complex nervous because Biden, it appears, is out to influence the world — not with military might but with something else. His statement regarding "ending an era" is long overdue. One of America's most decorated soldiers, Marine Corps Brig. Gen. Smedley Butler, wrote in 1935 "War Is a Racket," criticizing our government for using military might to influence and topple regimes.

Biden has seen beyond that particular mindset. As he pointed out, we have to learn from our mistakes. But is anyone listening? Did the president's words fall on deaf ears? He was blunt:

And here's a critical thing to understand: The world is changing.  We're engaged in a serious competition with China. We're dealing with the challenges on multiple fronts with Russia. We're confronted with cyberattacks and nuclear proliferation.

We have to shore up America's competitive[ness] to meet these new challenges in the competition for the 21st century. And we can do both: fight terrorism and take on new threats that are here now and will continue to be here in the future.

And there's nothing China or Russia would rather have, would want more in this competition than the United States to be bogged down another decade in Afghanistan.

So how does the president aim to involve the United States in world affairs? Better yet, how can the U.S., as the world's only remaining superpower, influence the world without taking up arms against terrorists and our enemies? Many people who live outside the United States still see us as a shining light on the hill. They want to live in a country where you aren't judged by your social caste, and where you can get an education and pull yourself up by your own bootstraps — a place where hard work can lead to a decent life. The United States has had a hard time fulfilling its own ideals, but it and the Western European democracies are some of the few places on the globe where those ideals are still embraced. People around the world recognize it and envy it.

The joke often stated in my youth, as we sent soldiers to fight and die in Vietnam, was that we had to make the world safe for Coca-Cola and McDonalds. There is a truth to that and Biden sees it. Our culture, our ideals and our lifestyle are much more successful — if exported — in shaping the world than our military might. The world loves our movies, our lifestyle, our music and our ideals. It often resents our military.

All of our investment in military hardware, our 800 bases across the globe and our massive military budget cannot stop a determined lone suicide bomber anywhere. We have to attack the root causes of the despair that leads a person to strap a bomb on themselves and commit suicide and mass murder. For that, you need hope for a future for yourself and your family — and nothing is more enticing than the hope this country can deliver of a life worth living.

For those who support a continued military effort in Afghanistan, Biden addressed what a third decade of "low-grade" military presence in Afghanistan would look like:

Remember why we went to Afghanistan in the first place? Because we were attacked by Osama bin Laden and al-Qaida on Sept. 11, 2001, and they were based in Afghanistan.

We succeeded in what we set out to do in Afghanistan over a decade ago. Then we stayed for another decade. It was time to end this war.

Biden hasn't backed away from using the military. He merely framed it as part of a larger strategy — making the world safe from chaos and terrorism will include but will not be exclusive to the American armed forces:

And for anyone who gets the wrong idea, let me say it clearly. To those who wish America harm, to those that engage in terrorism against us and our allies, know this: The United States will never rest. We will not forgive. We will not forget. We will hunt you down to the ends of the Earth, and we will — you will pay the ultimate price.

And let me be clear: We will continue to support the Afghan people through diplomacy, international influence and humanitarian aid.

To be blunt, Joe Biden is striving to make the world over in America's image. "But the way to do that is not through endless military deployments, but through diplomacy, economic tools and rallying the rest of the world for support," he explained. It isn't just American idealism that brought Biden to this decision, it's pragmatism over "how much we have asked of the one percent of this country who put that uniform on, who are willing to put their lives on the line in defense of our nation." Some of those who are in opposition to the Afghan withdrawal are those very people who would be called to serve.

A lot of our veterans and their families have gone through hell — deployment after deployment, months and years away from their families; missed birthdays, anniversaries; empty chairs at holidays; financial struggles; divorces; loss of limbs; traumatic brain injury; post-traumatic stress.

Most tragically, we see it in the shocking and stunning statistic that should give pause to anyone who thinks war can ever be low-grade, low-risk or low-cost: 18 veterans, on average, who die by suicide every single day in America — not in a far-off place, but right here in America.

There's nothing low-grade or low-risk or low-cost about any war. It's time to end the war in Afghanistan.

Biden lamented the "$300 million a day for 20 years" we spent in Afghanistan. Many members of Congress — on both sides of the aisle — and intelligence analysts agree: There's a better way to spend the money. That's one hell of an infrastructure bill for the U.S. — imagine if that much had been spent on infrastructure in Afghanistan. "What have we lost as a consequence in terms of opportunities?" Biden asked rhetorically when considering the cost in human lives and the economic price tag of our presence in Afghanistan.

This cannot be understated. We've proven we can blow things up, but can we build anything? Twenty years playing sheriff in a region that didn't want us? Could we have "won the peace"  with an investment in roads, bridges, education and food production?

We will never know what might have been, only what can be. The root cause of extremism that leads to terrorism is poverty, lack of education and a lack of hope.

If Biden has looked down the road for a real solution to the problem, then history may well judge Tuesday's speech as a turning point in history — when the world's most powerful nation appealed to its better angels in an attempt to make life better for the downtrodden, instead of reflexively reaching for a gun.

Of course, as T.S. Eliot once noted, "Between the idea and the reality falls the shadow."

Washington is too often dark with those who throw shade.