The spotted lanternfly is invading the Northeast. The consequences will be dire if they take over

The pest, which was accidentally introduced in the US in 2014, stands to devastate crops and livelihoods 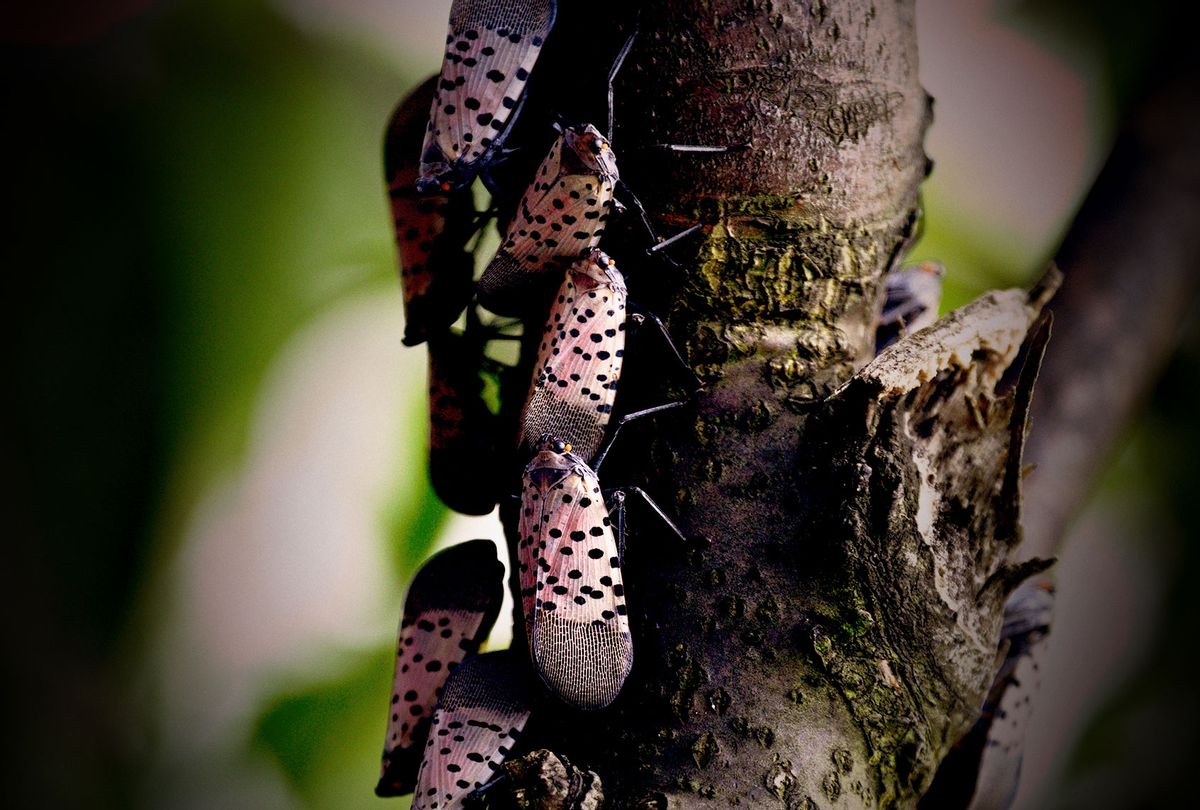 Spotted Lanternfly colonizes trees along a pathway on the banks of the Green Lane Reservoir, in Berks County, PA on September 16, 2018. A large number of Spotted lanternfly (Lycorma delicatula) found in area has the Pennsylvania Department of Agriculture install a quarantine to reduce the further spread of the for United States invasive species. The life cycle of the planthopper starts in September when eggs are laid and the insect reaches adulthood between July and December. (Bastiaan Slabbers/NurPhoto via Getty Images)
--

Like many people, I try to avoid killing insects or spiders unless it is absolutely necessary. Yet according to officials, this nonviolent stance towards insects could end up being a threat to the ecosystem of the Northeast. Indeed, the Pennsylvania Department of Agriculture is asking citizens to declare all-out war on one particular insect: the spotted lanternfly. Dispensing with any pretense of bureaucratic detachment, the state's website is admirably blunt:

In areas of Pennsylvania like Northampton County (where I live), spotted lanternfly are not hard to find. Despite being only an inch long, the moth-like insect has a beautiful pattern once it spreads its wings. You are greeted with bright red and black spots, similar to a ladybug shell, in sharp contrast to the drab gray, yellow and black-and-white patterns that cover the rest of it. It is hardly the most memorable insect, but it does make an impression.

More to the point, they are everywhere. And if they take over the American northeast, it is going to be a very, very big deal.

"If they go unchecked, they will continue to spread throughout the American northeast as well as to other regions of the US and also potentially to other countries as well," Julie Urban, an associate research professor of entomology at Penn State University, told Salon by email. Urban is the author of "Perspective: Shedding light on spotted lanternfly impacts in the USA," a scholarly article in Pest Management Science that offered projections on what will occur if spotted lanternfly continue to spread through the region. Both in the article and while speaking with Salon, Urban detailed how spotted lanternfly could destroy both lives and the landscape. One reason is that of the two plants that spotted lantern flies have been documented to kill via feeding, one of them — grapes — is a vital crop.

"It has killed grapevines, which of course has direct negative economic impacts for growers," Urban told Salon. "However, it also has caused growers to increase the number of insecticide applications they make to try to control [spotted lanternfly] (which still is not sufficient to allow them to overcome the damage caused by waves of [spotted lanternfly] coming into vineyards, particularly in mid-September), and more insecticide sprays cost more money."

All of this is already happening in southeastern Pennsylvania and could occur in areas like Long Island, the Hudson Valley and the Erie regions of both Pennsylvania and New York. The insects have recently been observed in New York City.

Agriculturally speaking, the spotted lanternfly problem is not limited to grapevines. Urban reported that Christmas tree growers and nurseries have also had issues with spotted lanternfly partially damaging their stock. Beyond that, it is expensive to try to keep the insects away from their products, which they must do by monitoring for every stage of the animal's life cycle — from egg masses through every development stage until they reach adulthood. Every occasion when spotted lanternfly are found within a plant — even if they are dead — must be reported, and offending businesses could receive fines and harm their business reputations. Urban also pointed out that other businesses could be impacted precisely because spotted lanternfly are not indigenous to our ecosystem, and are therefore unpredictable.

Melody Keena, a research entomologist at the United States Forest Service, added that the insects can also be a problem for ordinary people just trying to rest in their homes.

"[Spotted lanternfly] are a nuisance pest of homeowners," Keena explained by email. While scientist are unsure about their long-term impact on landscape trees, they produce "copious quantities of sticky honeydew when they feed and black sooty mold will grow on it." These byproducts can make for slippery surfaces and can be a tripping and slipping hazard.

Some of the gross fluids produced by spotted lanternfly directly contribute to their invasiveness. Their egg masses are covered with a gray waxy material that helps them stay attached to smooth surfaces like tree bark, cinder blocks, stone, shipping pallets, rail cars and automobiles.

Experts believe that the spotted lanternfly entered the United States from its native Asia (particularly China, Vietnam and Bangladesh) after an egg mass attached to a shipment of stone arrived in the Berks area of Pennsylvania. Since then, it has continued to spread as the bugs have dispersed, reproduced, and taken advantage of their reproductive cycle to avail themselves of human transportation corridors.

"This makes human aided transport likely, and this has contributed to its spread both nationally and internationally," Keena explained.

Going forward, ordinary Americans are being asked to be on the alert for spotted lanternfly in order to halt the invasion.

"There is an active effort underway to reduce [the lanternfly's] populations," Erin Otto, National Policy Manager, in the U.S. Department of Agriculture's (USDA) Animal and Plant Health Inspection Service (APHIS), told Salon by email. "It may not have as many natural predators here as it does in its native habitat, but APHIS, state departments of agriculture, and U.S. residents are working to contain and manage the pest."

Matthew Helmus, an assistant professor of biology at Temple University, told Salon by email that this will include supporting funding for programs that survey for spotted lanternfly, removing trees of heaven from their properties (this is the other plant that they are known to kill in order to eat), and learning how to identify the spotted lanternfly when it is on one's property.

And if you happen to spot one? Well, the Pennsylvania Department of Agriculture's website tells you exactly what you should do next.