25 of the most covered songs in music history

Beyond The Beatles & Elvis, Cyndi Lauper is only one of a handful of women whose songs have been covered the most 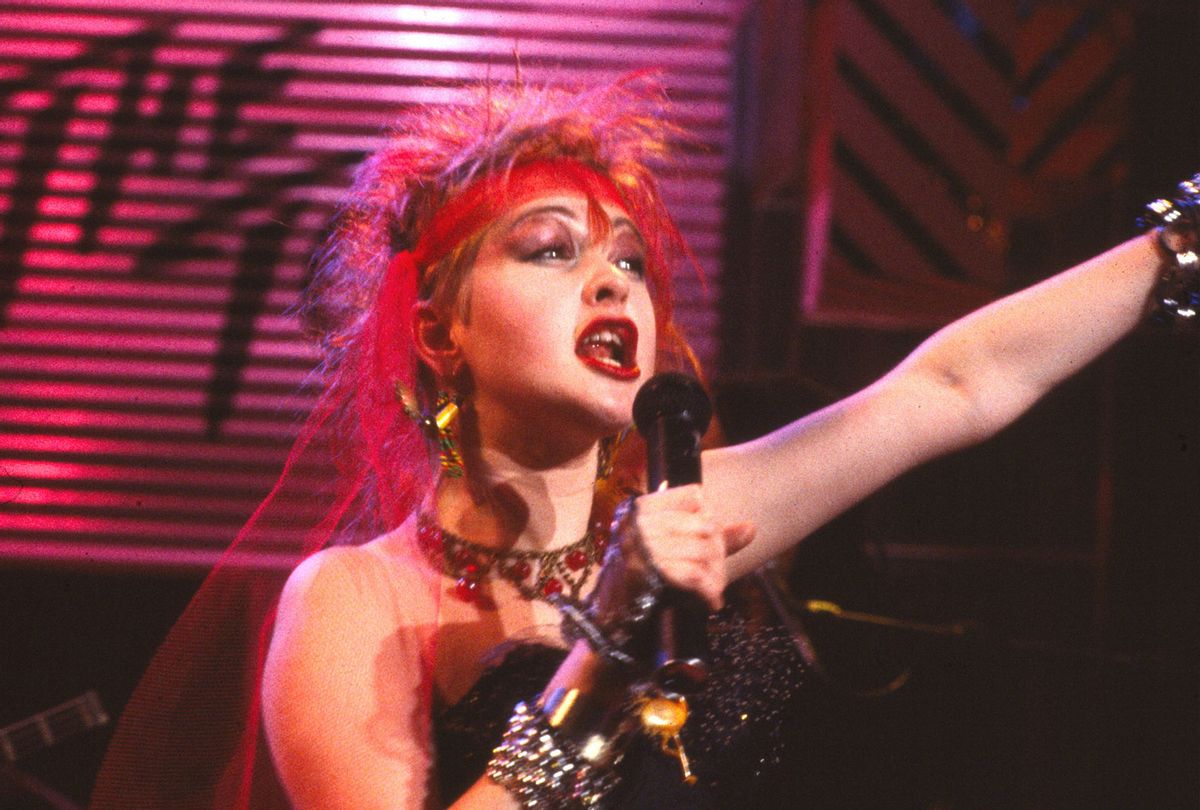 Unlike movies, where it's rare that a second (or third) attempt at remaking a film can ever match—let alone top—the original, music is a different sort of creative beast. Just because The Beatles did a bang-up job on one song doesn't mean that Joan Baez or Elvis Presley couldn't do the same tune justice in their own unique way. Which is a very good thing, as The Beatles's catalog is one of the most copied in music history. While not an exhaustive list, here are 25 of the most covered songs.

"Yesterday" has been covered more than 2200 times, with Joan Baez, Liberace, Frank Sinatra, Elvis Presley, En Vogue, and Boyz II Men among the many (many) artists to put their own spin on the song. Plus, you know you've made it as a band when even Daffy Duck gets in on the action.

This classic Rolling Stones song has been redone by a diverse array of artists, including Jimi Hendrix, Devo, and Vanilla Ice. It was also famously covered by Britney Spears at the 2000 MTV Video Music Awards before she launched into "Oops! I Did It Again."

"Love Me Tender" was a hit long before Elvis and songwriter Ken Darby changed the title and the lyrics. The song became popular during the Civil War under the name "Aura Lee," but it was the version that was altered in 1956 that would go on to become covered by other musicians time and time again. The range of artists who have covered it—everyone from Julie Andrews and Johnny Cash to Jim Morrison—shows just how versatile it is.

When "Billie Jean" was released in 1983, it became the first song to hit #1 on four pop charts simultaneously. The song is still one of MJ's most popular and most covered, with at least 143 recorded versions floating around out there. And yes, that includes the Chipmunks.

A somewhat surprising choice, considering The Beatles's other hits, but it's been covered 131 times by artists such as Ray Charles, Tony Bennett, Aretha Franklin, Kansas, and Swedish industrial metal band Pain.

The ironic part of Sinatra's "My Way" is how many of the artists who covered the song didn't do it Frank's way. But with at least 152 covers in existence, from country to punk, a little variation is to be expected. (Just avoid doing a karaoke version.)

According to Secondhand Songs, there are nearly 600 versions of this seminal Simon and Garfunkel ballad. Released in January 1970, the sweeping epic was immediately covered by both Johnny Mathis and Stevie Wonder just a few weeks later.

Withers wrote "Ain't No Sunshine" while he was working as an aircraft mechanic. The hit song propelled him onto the music scene and we've heard versions ever since, including from Paul McCartney, Adam Levine, and DMX.

Fun fact: Withers didn't originally intend to say the famous "I know" line 26 times; it was just a placeholder for lyrics that he eventually planned to pen. But a gaggle of legendary musicians happened to be in the studio while he was recording, including Graham Nash, Stephen Stills, and Booker T., and they told him it was great. "They were all these people with all this experience and all these reputations, and I was this factory worker in here just sort of puttering around. So when their general feeling was, 'leave it like that,' I left it like that," Withers said.

After being featured in every TV drama and sweeping cinematic moment, Leonard Cohen himself once agreed with a suggestion that maybe it was time to retire "Hallelujah" and its endless cover versions. Cohen also found it amusing that the song received so much attention, because his record label refused to release the album it was originally on. He later changed his mind about the covers, saying, "once or twice I've felt maybe I should lend my voice to silencing it but on second thought no, I'm very happy that it's being sung."

The original song is from one of The Beatles's earlier albums, A Hard Day's Night, and has since been reworked by Bob Marley, Smokey Robinson, Sarah Vaughan, Barry Manilow, and Vince Gill, among numerous others.

The fact that this '80s staple has been covered 270 times isn't such a surprise, but the wide-ranging styles of those covers are. Check out Miles Davis wailing on his version at the Munich Philharmonic in 1988.

Secondhand Songs reports that the Man in Black's gravelly hit has been covered nearly 200 times, but honestly, that seems low. However, the quality is high: Artists who have covered "I Walk the Line" include Dolly Parton, Dean Martin, Halsey, the Everly Brothers, Los Lonely Boys, Waylon Jennings and... Leonard Nimoy?

God only knows how many times this 1966 song by the Beach Boys has been covered, but it was more than 200 at last count. Lyle Lovett's live version at the 2007 Kennedy Center Honors, where Brian Wilson was honored, stands out to Wilson as the best rendition ever: "I thought Lyle Lovett's version was the best version I ever heard, including the Beach Boys'. The most loving, beautiful version I've ever heard. Unbelievable."

It may come as a surprise to know that "House of the Rising Sun" is actually not by The Animals originally, although their legendary folk-rock version is arguably the most well-known. "House" is a traditional folk song with roots going back to early 20th century Appalachia, and maybe even earlier. Everyone who's anyone has covered this classic, including Dolly Parton, Woody Guthrie, Bob Dylan, Jimi Hendrix—and even Andy Griffith.

This jazzy number from 1955 has been covered by a huge range of people, including Barbra Streisand, Joe Cocker, Aerosmith, Rick Astley, Björk, Merle Haggard, and Olivia Newton-John.

Musical stalwarts like Joan Baez, Ray Charles, Elton John, David Bowie, and Queen have all given their own personal touch to "Imagine." And in recent years, the likes of Pink, Lady Gaga, and Avril Lavigne have joined the long list of artists who have attempted to make the John Lennon classic their own.

A more contemporary song on the list, John Legend's 2013 song about then-fiancée Chrissy Teigen was once dubbed "YouTube's Most-Covered Song." Not a big fan of ballads? Don't worry; there are plenty of other flavors out there, like Tiesto's EDM remix.

One of the most frequently performed songs during American Idol auditions has also been covered by plenty of musical greats. Non-Idol cover versions include Willie Nelson, Patti LaBelle, Eva Cassidy, Eric Clapton, Chet Atkins, Tori Amos, Me First & The Gimme Gimmes, and Israel Kamakawiwo'ole. That last version is the Hawaiian rendition that's mixed with "What a Wonderful World" that has gotten a lot of play in recent years.

Abbie Mitchell is the person who originally sang "Summertime" in the 1935 opera Porgy and Bess, but Janis Joplin's cover is probably the best-known version. But Sonny and Cher did a version, too, and so did R.E.M.

Co-written by Ed Sheeran and Benny Blanco, Bieber's 2015 revenge smash really resonated with his fellow artists. It's been covered by Halsey (with slightly more explicit lyrics), Dua Lipa, Alessia Cara, and Dashboard Confessional. In fact, the song has been ranked just under "All of Me" as one of the most covered YouTube songs.

Another one of the prettiest Beatles songs, and another one of the most covered. In 2016, Foo Fighter Dave Grohl covered it during the Oscars, but there are also versions from Phish, Jesse McCartney, Bobby McFerrin, Eddie Vedder, and Elliott Smith.

Although the good people at Guinness World Records recognize "Summertime" as the most recorded song in history, they also note that "Amazing Grace" has been recorded thousands of times, appearing on at least 11,000 albums. And it's no wonder—the song has been around since 1779, and the lyrics since 1772, when clergyman John Newton wrote the poem. And it's not just popular at church; Judy Collins' version charted for 67 weeks between 1970 and 1972.

Written by Burt Bacharach and originally sung by Dusty Springfield for the first Casino Royale soundtrack in 1967, "The Look of Love" has been covered a lot. The Zombies, Diana Ross, Gladys Knight, Nina Simone, Marvin Gaye, Shirley Bassey, and Diana Krall are just a few of the artists who have made it their own.

Thanks to the ubiquitous holiday albums churned out by everyone from David Hasselhoff to Snoop Dogg, many holiday songs have the potential to make a "most covered" list. But according to Billboard, Irving Berlin's "White Christmas," originally crooned by Bing Crosby, tops the list. The tune has been consistently covered since it was released in 1942, from Sinatra doing an early version in 1944 to Gwen Stefani covering it in 2017.

Another holiday entry on the list, FiveThirtyEight noted 26,496 "Silent Night" covers on Spotify alone—making it not so silent after all. So what version is considered the best? That's a matter of taste, of course, but in an Entertainment Weekly poll from 2013, readers chose the version by Kelly Clarkson, Trisha Yearwood and Reba McEntire. (YMMV.)