Republicans are targeting the state's most Democratic county in a "power grab" to "suppress voters," Democrats say 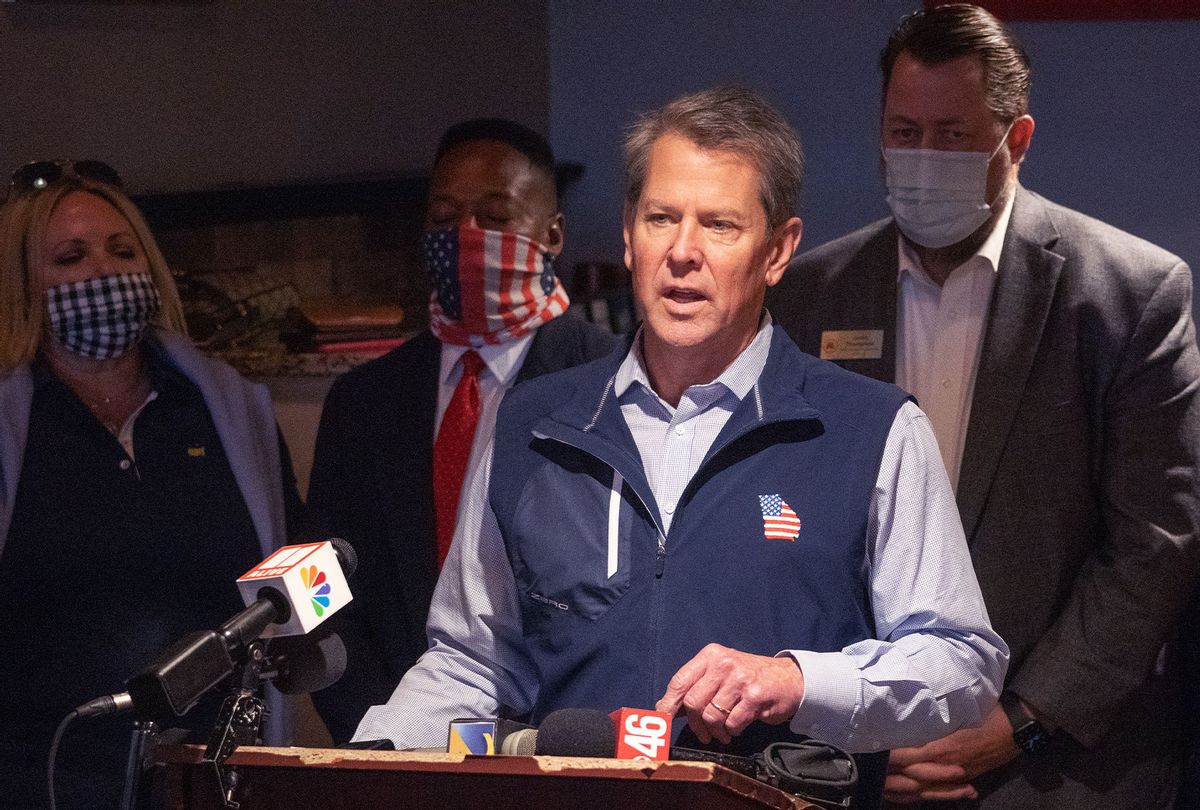 Georgia Gov. Brian Kemp speaks at a news conference about the state's new Election Integrity Law that passed this week at AJ’s Famous Seafood and Poboys on April 10, 2021 in Marietta, Georgia. Major League Baseball announced it would move the All-Star Game out of Georgia in response to the election bill, which opponents claim will negatively affect the minority population's ability to vote. There is also a concern for the economic impact this will have on the state following the MLB's decision. The bill's passage follows the Governor's decision to lift many of the restrictions in place for protection from COVID-19. (Megan Varner/Getty Images)
--

Georgia Republicans are already trying to use their controversial new election law to drive out local election officials in the state's largest and most Democratic county.

Gov. Brian Kemp earlier this year signed SB 202, a law that not only restricts ballot access but allows state officials to temporarily take over county election boards. This has raised concerns about potential Republican election subversion after the party lost the presidential race and both U.S. Senate elections in the state amid record voter turnout. Republican lawmakers wasted no time using the law to target election officials in Fulton County, which includes most of of the city of Atlanta and has a population of more than a million people, about 44% of them Black. President Biden won 72.6% of the vote in Fulton County, outperforming Hillary Clinton's 2016 total by 83,000 votes. The county has been the a primary target of former President Donald Trump's false election claims and multiple lawsuits filed by his supporters, although there has been no evidence of fraud or misconduct.

Republicans representing the county in the state legislature called for a performance review of the country's election board in July, which Scott Hogan, the head of the state Democratic Party, decried as a "shameless Republican power grab designed to suppress voters and inject partisan politics into our elections."

"It appears that they would like to take over the county board of elections," Aunna Dennis, the executive director of Common Cause Georgia, said in an interview with Salon, calling the move part of a "coordinated strategy" that represents Republican "opposition to, basically, democracy."

The misinformation and lawsuits preceding the review show that there was "clearly partisan motive" on the part of Republicans, Charles Bullock, a political science professor at the University of Georgia, said in an interview with Salon.

"The predicted changes to Georgia's electorate are finally coming to fruition," he said, noting that the 2020 election was likely the first time that urban Georgia had outvoted rural Georgia. "Finally there's now proof that the state is changing and it's going to be harder for Republicans. Where is the single biggest bastion of Democratic voters? Well, it's in Fulton County."

Fulton County accounts for 11% of Georgia's electorate and is one of the state's most diverse counties. Robb Pitts, the chairman of the County Board of Commissioners, warned since before the law was approved that it would be used to target the county.

"This is the result of a cynical ploy to undermine faith in our elections process and democracy itself — it is partisan politics at its very worst," Pitts said at a news conference last month. "This is a shameful reminder that the Big Lie is still alive. It has been successfully laundered and accepted by some of those who initially stood up against it, such as our secretary of state. Now, his comrades in this fight are the same conspiracy theorists he rebuked last year. He's sold out and thrown his lot in with those who want to conduct a hostile takeover of our elections because he fell out of grace with the former president — he's desperately trying to cling to power by appeasing those who believe the Big Lie."

Bishop Reginald Jackson, a presiding prelate of Georgia's AME Church, pointed to the record turnout among Black voters, who slightly outnumber whites as the largest single group in the county's population.

"Today, it is clear that the Georgia Republican Party is scared. Since they no longer can win elections based on ideas, policy, leaderships or morals, their only pathetic course of action is to try to take legitimate votes away," he said in a statement last month.

Republicans who called for the review said in a letter to the State Election Board that it was necessary to "assure voter confidence in our elections." Raffensperger, who pushed back against false claims by Trump and Georgia Republicans about the state's elections, also supports the investigation, though he did not get a vote because the law removed him as the chair of the State Election Board. Kemp said he "fully" supports the review.

"Fulton County has a long history of mismanagement, incompetence, and a lack of transparency when it comes to running elections — including during 2020," the governor said on Twitter.

The county has certainly had its share of election problems, including long lines at polling locations. The State Election Board entered into a consent order with the county after voters endured hours-long lines in last year's primary elections, which Democrats largely blamed on a statewide effort to shutter hundreds of polling places after a Supreme Court decision gutting a section of the Voting Rights Act and a lack of resources provided by the Republican-led state legislature.

"It's definitely a result of underfunding," Dennis said, noting that Republicans who claim to be concerned about election management in Fulton County "are not really trying to invest in helping the board of elections operationalize their offices" amid a pandemic. "Let's not try to take them over, let's try to actually be solution maker and mitigate the barriers, not create more barriers," she said.

An independent monitor, Carter Jones, was appointed to observe the county's handling of the general election. His notes, which were obtained by the AP, showed that the county's handling of the ballots was messy and poorly managed, which may have fed unfounded allegations of fraud or mishandling. But he stressed that he saw no evidence of "any dishonesty, fraud or intentional malfeasance."

"At a certain point, it's people willing to believe the worst in other people to justify a narrative that they have themselves," Jones later told the AP, referring to the Trump-centric conspiracy theories targeting the county.

Under the law, the review panel will "make a thorough and complete investigation" of "all actions of the local election official," including its handling of election equipment, oversight of voter registration, compliance with election law and whatever other issues may be raised by lawmakers, according to Georgia Public Broadcasting. The probe is expected to last several months, though there is no time limit. The entire process could last a year or more.

After the investigation, the panel will issue a report and could ultimately recommend that the county's bipartisan elections board should be suspended and replaced by a temporary superintendent who would have full authority to make staffing changes and polling location choices. Because the state also allows any voter to challenge any other voter's eligibility, the superintendent could also decide on requests to disqualify individual voters.

That move can be requested by county government, which is unlikely given Pitts' position. But it could also be requested by the Republican-led State Election Board following its own investigation and hearings to determine whether the board broke at least three election rules or laws in the last two election cycles, or whether there is "clear and convincing evidence" that the board demonstrated "nonfeasance, malfeasance, or gross negligence" over that span.

Local election officials could potentially be suspended for up to nine months, though they can petition for reinstatement before that. If such a suspension holds up, the State Election Board could remove the temporary superintendent after nine months or appoint a new election board.

The State Election Board's members said they were required to appoint the panel under the law. Sara Tindall Ghazal, the only Democrat on the board, said she hopes that the investigation will focus on improvements that will better serve voters.

"The narrative driving this pressure has been influenced by disinformation surrounding the November 2020 election, but the fact remains that Fulton County voters have reported numerous problems for far longer than November 2020, particularly surrounding registration and absentee ballots," she said last month. "So I urge Fulton County to view this performance review board as an opportunity to have fresh eyes on their systems and their procedures and identify areas of improvement."

But the impression that the review board is bipartisan is misleading, said Bullock, the University of Georgia professor. "Republicans are still running this thing. Any kind of board that gets appointed, not just in this context but others, is going to be predominantly Republican."

Voting rights groups have sounded the alarm over the possibility that an appointee of the Republican-led state board would be in charge of election administration in a county that is crucial to Democratic electoral prospects in Georgia.

"We'll have appointees that don't live in the jurisdiction, that don't reside in counties as populous or as robust," said Dennis of Common Cause Georgia. "That's kind of the fear, that we will have representation that does not match the community" and no say over "any of the implementations of laws or structuring of the election board, nor any say in the inner workings, even down to suggesting new precinct locations and trying to do voter education campaigns with the board of elections. All these things that we have been able to do as a community — we will no longer be able to do that if this takeover happens."

Dennis also warned that "whatever happens in Fulton is going to domino across the state" and that if this approach is successful for Republicans, other states with GOP-majority legislatures could soon follow.

"This would become a domino effect across many states," she said. "If it happens in Georgia, people should definitely be looking out to see if major counties, and definitely progressive counties or cities who have large voting populations, will be targets as well."

Some voting rights groups are preparing to raise funds to defend local election officials and continue to push for Congress to pass voting rights legislation like the For the People Act. In fact, even that sweeping election bill does not that currently include measures to prevent the kind of takeover activists fear.

"The worst-case scenario is that democracy is forever scarred by this direct attack to disenfranchise Black voters in a partisan election takeover," Nse Ufot, who leads the New Georgia Project, a grassroots voting rights group, said in a statement to Salon. "This is a whitelash against the progressive coalition that came out in historic numbers to vote out 45 and send two Democratic senators to D.C. The ripple effects of SB 202 are already being replicated across Georgia and other GOP-controlled states across the country and the time to act is now."