About to go shopping for heirloom tomatoes? Here's no-nonsense advice from a real-life tomato expert

Fact: There are more than 3,000 varieties of heirloom tomato plants in active cultivation 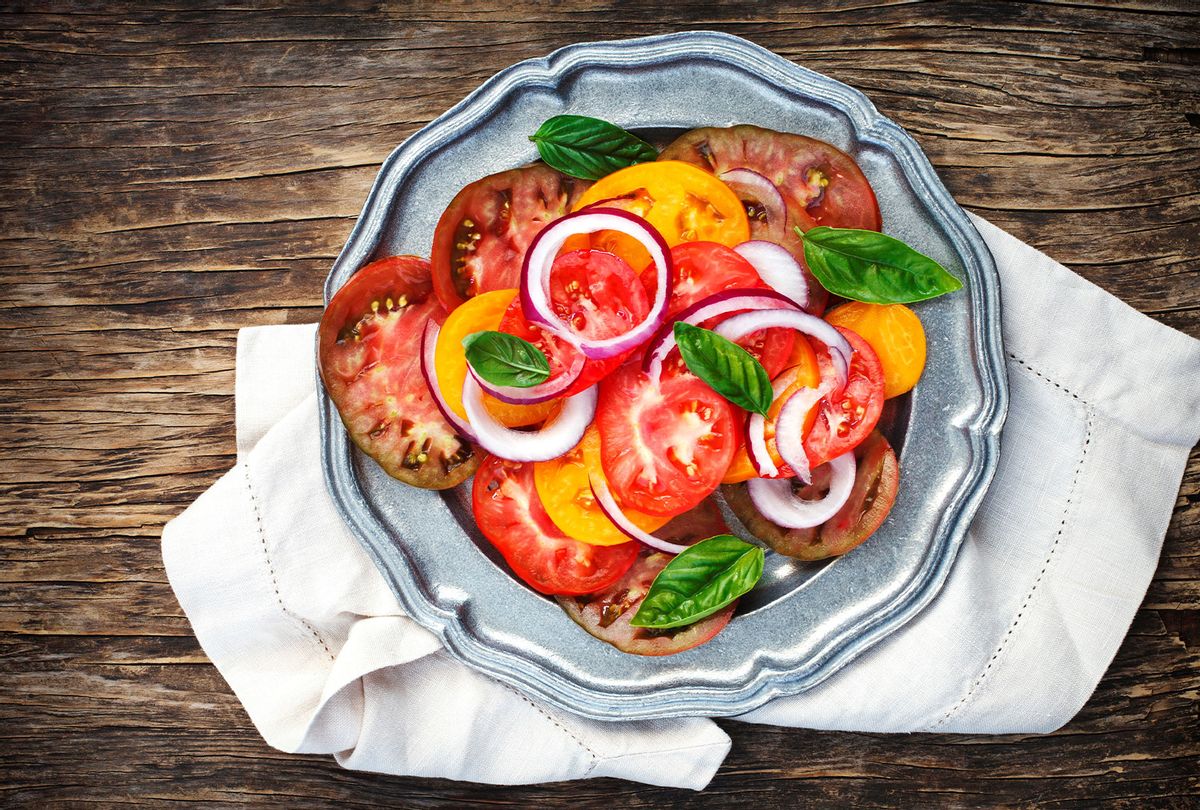 Even when you know a thing or two about tomatoes, the wide world of the much-loved fruit is enormous — there are at least 10,000 varieties out in the world. That might seem hard to believe when you see only a few at the grocery store — beefsteak, grape, cherry, plum — but a trip to a farmers' market or a specialty grocer can give you a glimpse into the wider world of flavorful and unique varieties. These tomatoes are most likely heirloom tomatoes: tomatoes whose seeds have been passed down from generation to generation, and are grown using open-pollinated seed (aka non-hybrid seed). These varieties are generally at least 50 years old, although some have been saved for more than 400 years.

There are more than 3,000 varieties of heirloom tomato plants in active cultivation, which is why we sat down with Craig LeHoullier, author of the 2019 book "Epic Tomatoes," to talk about some of the best heirloom tomato varieties. Among his credentials as a bonafide tomato expert (tomato whisperer, as we like to call him), LeHoullier has grown more than 4,000 varieties himself; named the now-loved Cherokee Purple tomato in 1990; and is co-leader of the Dwarf Tomato Breeding Project, which helps breed and share tomato seeds ideal for smaller spaces and container gardening.

The different types of tomatoes

There are reasons why the tomatoes you see at farmers' markets look a bit different than those at grocery stores. "The tomatoes that are in grocery stores have been bred to be machine harvested, piled into train cars, gased with ethylene to help them turn that ugly, sickly pink color, and they don't taste very good," explains LeHoullier.

The commercial tomato industry focuses on tomatoes that look and taste the same, can be shipped year round, can travel long distances without spoiling, and are firm enough to be easily sliced for sandwiches. That production system relies on heavy use of pesticides and farming practices that are detrimental to the environment. Focusing on consistency and productivity by growing just a few tomato varieties, as the commercial agriculture industry does, is also a concern for biodiversity, as pollinators are exposed to more chemicals and plants could become more susceptible to disease.

Beyond large-scale commodity tomato farming, there are farmers using responsible farming practices growing hybrid tomato varieties, a process that cross-pollinates two tomato varieties to produce offspring with the best traits of each parent plant. Hybrid plants can be bred for a number of reasons, including disease resistance, uniformity, productivity, ease of growing and flavor. (While sometimes confused with genetically modified organisms, hybrids are produced by normal breeding, whereas GMOs are the product of more complex genetic modification in a lab.)

Heirloom plants, on the other hand, are older "vintage" seeds of plants that have been around since before 1950. (The first hybrid tomato seeds to be sold in a catalogue, Burpees Big Boy, went on sale in the 1950s, says LeHoullier, so anything from before that date is likely to be non-hybrid.) Heirloom tomato plant seeds are saved from harvest to harvest, passed down from generation to generation, and organizations like Seed Savers Exchange and others have helped revitalize interest in heirloom flavors and their stories. While some popular types of heirloom tomatoes are sold on a wide scale at grocery stores, you'll have the most luck finding the more interesting and flavorful varieties at farmers' markets, farmstands and in community supported agriculture (CSA) shares.

Tips for shopping for heirloom tomatoes

LeHoullier says consumers shouldn't worry about buying tomatoes at the farmers' market when they are only half ripe. "That's actually a smart time to pick them," he says, "because if you leave tomatoes on plants until they become fully colored, they're more likely to be eaten by a critter, and they're more likely to crack, especially if you get rain or something like that."

And as an avid tomato grower — he's been at it for 40-plus years — LeHoullier has put his tomatoes to the test. "I can pick tomatoes that are half ripe, leave them on my counter for two days, and they fully ripen up and they taste indistinguishable from tomatoes that are off the vine."

You should also know that there is no correlation between color and flavor. Some will be sweet, some will be tart, some mild, some shockingly intense. It's an individual journey to figure out what flavor of tomatoes you enjoy, LeHoullier says, recommending people buy a few varieties and have a tasting party at home. "If people go to a farmers' market stall and see 20 different types of tomatoes," LeHoullier says, "they can assume that it's like getting a box of chocolates. Bring it home and take a bite out of each one."

Some of the best heirloom tomatoes

Ready to go shopping for heirloom tomatoes? Here are some of the best heirloom tomato varieties, with suggestions from LeHoullier, as well as tips pulled from several of our favorite Instagram tomato accounts, Wild Boar Farms, Gary Ibsen, and the World Tomato Society.

This heirloom tomato is a whirlwind of colors, with a dark purple-black skin, red-green-purple outer flesh with a darker red interior flesh. It lands on LeHoullier's top three favorite tomatoes list for a few reasons: "You know, part of it is I get to name it (he named the tomatoes in 1990), so I feel like it's a special tomato to me, " he says, "and part of it is because it really is just a super delicious tomato that yields reliably for gardeners all over the country. And it's not terribly hard to find it at farmers' markets anymore. It's become very popular."

Cherokee purple tomatoes have a sweet, rich flavor, sometimes described as a bit smoky. They are great on sandwiches or salads.

Gary Ibsen, author of "The Great Tomato Book," and co-founder of The World Tomato Society, says these thin, dark, mahogany brown/purple skinned tomatoes are the best selling and most popular of the 650 tomato seed varieties he sells online. "Fruits are irresistibly delicious with sweet, rich, complex, full tomato flavors that burst in your mouth, characteristic of the most flavorful black tomatoes," he writes. (Black tomatoes are usually described as having an earthy, sometimes smoky sweetness to them.) Black cherry tomatoes are a great container garden tomato, easy to grow on patios or other small spaces, and are often found at farmers' markets. Use for a burst cherry tomato pasta sauce, salads or eating out of hand.

Brandywine tomatoes are a variety more and more common at farmers' markets: large, heavy tomatoes with a nice balance of sweetness and acidity. "Brandywine is a spectacular tomato," says LeHoullier. Brad Gibson, a tomato breeder and grower in California who runs Wild Boar Farms, describes them as, "large, meaty, tasty tomatoes with great production."

You can also find Brandywine tomatoes in a few different colors, including pink, yellow and orange. The Yellow Brandywine are said to be more productive than other varieties, so you may see them more often. The World Tomato Society suggests using them to make yellow tomato juice, among other things.

Another popular yellow tomato among many growers and shoppers is the Hawaiian Pineapple tomato. Ibsen describes this large golden-orange beefsteak variety, as having a "luscious, very rich, sweet pineapple-like flavor." But for others, including LeHoullier, the flavor is too sweet and not tomatoey. "

"They don't taste like tomatoes to me. They taste like a peach and they have the texture of a peach," LeHoullier says. "So they're actually not my favorite tomatoes to eat, but I do think they're among the most beautiful tomatoes of all."

For some preparations, or those who don't like sweet, fruit flavors, these tomatoes might not be the best choice. But for recipes where you'd like a little sweetness — tomato granita or salsa maybe — they could be the perfect fit.

"The tomatoes that stay green when they are ripe, which always fool a lot of people, they almost all taste great," says LeHoullier. "Something like Green Giant or Cherokee Green are always among my favorite tomatoes." They are both great options to look for at the farmers' market and similar in taste and color. Green Zebra are sometimes striped with yellow and are round and smaller than Green Giant, which can grow up to two pounds. Gibson describes Cherokee Green, whose interior is bright green and skin is yellow-ish when ripe, as a "truly wonderful tomato." They all have intense flavors, with variations of juicy, tangy, tart and sweet notes. As LeHoullier says, you can't really go wrong with these green guys.

Sungold cherry tomatoes (not heirloom, but worth mentioning)

Not an heirloom variety, but still worth noting as they are the only hybrid that LeHoullier actively grows year after year. "There is no tomato that tastes like it," he says. "It is really quite spectacular."

With a distinctive, tangy-sweet flavor, these golden-orange cherry tomatoes are a bit firmer/plumper than other cherry tomato varieties, they are great eaten out of hand, in salads or on crudite platters.

The crust is a great recipe that we use often for savory pies such as quiches. It is much easier to work with than typical flour and shortening crusts. Feel free to experiment with the filling – the type of cheese, don't use the almonds, etc. The star of the production are the slow-roasted tomatoes! This recipe was demonstrated at a cooking school class I participated in at Southern Season Gourmet Store in Chapel Hill, N.C. (which, alas, has closed). This is simply one of my favorite things to make with tomatoes! For the crostata assembly

This is the preparation for the tomatoes to use in the Roasted Tomato Crostata recipe. They are also wonderful for a pizza topping, or cut into slivers and used in a pasta topping…or a frittata, or an omelet – or just to munch on. They are similar to sun dried tomatoes, softer and juicier, but the flavor is just as concentrated. Be creative! We froze 10 bags of them and make recipes using them all winter, into spring. This recipe is a modification of that used in a cooking school class that I participated in for the cooking school at Southern Seasons Gourmet Shop in Chapel Hill, NC (alas, it is no more).