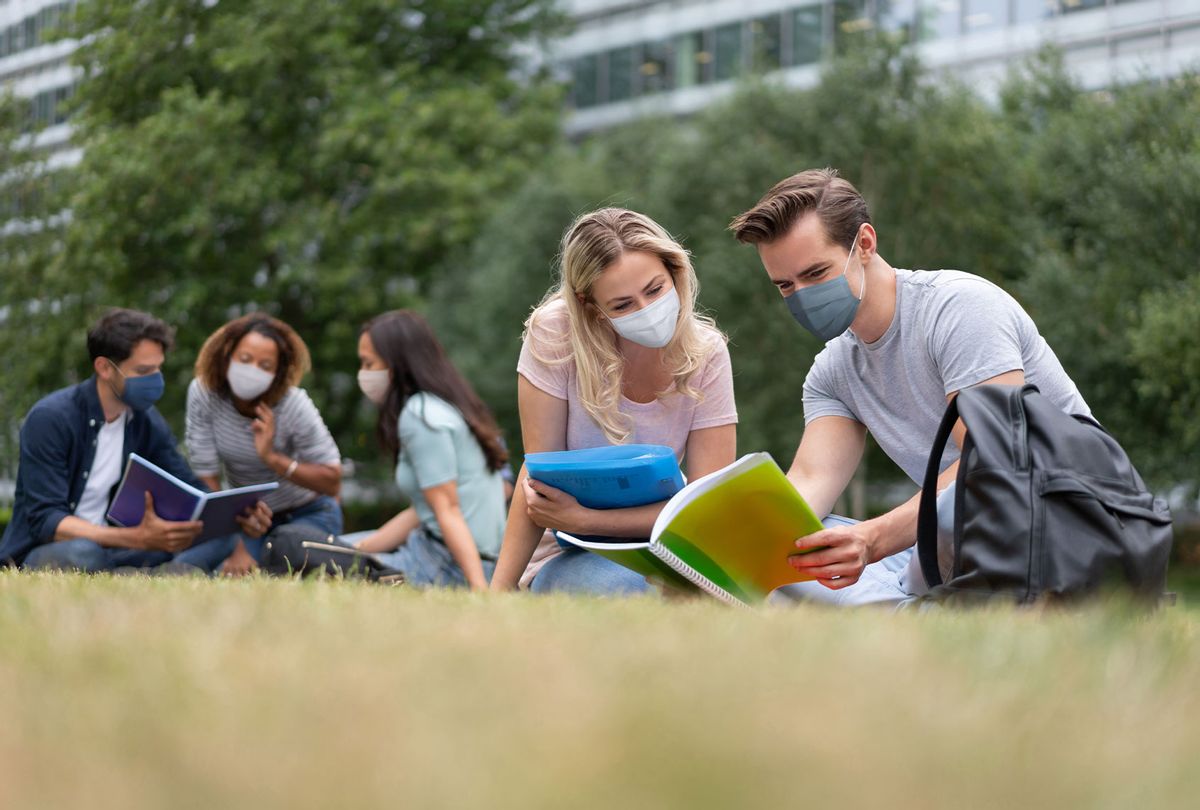 When my university announced its swift conversion to online teaching during the spring of 2020, I — like everyone else — raced to the local shopping center to stock up on food, sanitizer, and paper products. I was — perhaps naively — shocked as I stood in line with college students, my cart loaded with frozen vegetables and toilet paper, theirs with liquor, beer, and chips. Across the next year, I'd occasionally drive through my Michigan college town and notice that students threw unmasked house parties, seemingly unconcerned with anything having to do with COVID-19.

I returned to campus recently, which necessitated another trip through town. The scene was exactly as it had been over a year ago: After more than a year of remote learning, grocery stores are jammed with carts full of alcohol. Meanwhile, hordes of students clog streets, bars and the sunburnt front lawns of their rentals to party like it's 1999. I'm a college professor; the concerned adults and loved ones who populate students' worlds are fooling themselves if they believe that students are not having sex in the name of public safety.

This wishful thinking doesn't merely miss the mark; it's also stunningly naïve. According to Jennifer S. Hirsch and Shamus Khan, authors of Sexual Citizens: A Landmark Study of Sex, Power and Assault on Campus, "colleges and universities are social institutions. Students see this social life — friendships, extracurriculars and networking, and also sex — as fundamental to the college experience."

My own experiences with sex education and the increased politicization of sex ed in general have me wondering about the extent to which students are prepared to navigate their sex lives safely and knowledgeably.

When, several years ago, one of my college students expressed that he and his partner were shocked over their unplanned pregnancy (he'd told me that they'd been sexually active without using protection of any kind), I was stunned. How do students in the 21st century make it to college without understanding that pregnancy is a real consequence of unprotected sex?

The issue, to be sure, is not about the pregnancy but how they never imagined the likelihood of this outcome to begin with. How many other students don't know the basics? And who's to blame for these educational failures?

Consider the context: This situation took place in his home state of Wisconsin. According to the advocacy group Sex Ed for Social Change, "Sex education is not currently mandated in Wisconsin and schools that do teach sex education must stress abstinence…school districts are left to decide what type of sex education – if any at all – they provide to youth." In 2012, right around the time my student would have been moving through school, the Wisconsin state legislature amended the curriculum that had previously mandated medically accurate sex education. Specifically, they eliminated discussion of the health benefits, side effects, and proper use of contraceptives and barrier methods approved by the federal Food and Drug Administration.

It might be a reach to blame Wisconsin's deeply conservative and anti-science legislature for my student's failure to anticipate the consequences of unprotected sex, but perhaps not much of one. This is the same legislature that fought Governor Tony Evers tooth and nail over mask mandates.

According to the Guttmacher Institute, a health policy and research organization, only 18 states require medically accurate sex education. I received my own sex education in the 90s, in New York City public schools. I vividly remember how the girls were pulled from their classes and into another room where we learned about our bodies and the events that potentially lead to fertilization or disease. A stranger in a lab coat lectured at us using an overhead projector. She made a show of fitting condoms onto bananas and droned on about pregnancy. Our gym teacher, an intimidating woman with an intricate bouffant screamed at us about the probability of contracting sexually transmitted infections (although at the time, disease was the word du jour and applied copiously).

I was 12 years old and terrified. For the next six years, the sex education curriculum to which I had access was strictly associated with unplanned pregnancy and disease. An in-between did not exist, save for when my grandmother, drunk on Bud Light, told me that sex could be beautiful but to not even think about it because it'll ruin my life in much the way it ruined hers (in the 50s and 60s she'd had five children with three different men and was destitute for much of her life).

My school-based run-ins with sex education, however awkward and a bit bewildering, were far from an abstinence-only perspective, and in that way were at least realistic. But that's not to say that the curriculum (or my teachers) did everything right. To the contrary, for the next decade I convinced myself that it was possible to become pregnant even in the absence of a robust sexual encounter. (Religion did not play into my beliefs. I embraced agnosticism at 14, the minute my parents—mercifully—stopped forcing me to attend weekly bible studies.) As a teen and young adult I was relatively celibate but regularly took pregnancy tests "just to be sure."

In my own way, I'm also the product of sex education gone wrong: My schooling's over-focus on disease and pregnancy prevention at the expense of all else lead to a paranoia about sex that wouldn't abate until well into my twenties. For the record, schools in New York are not legally required to teach sex education at all (although there is a senate bill pending in my home state which would require comprehensive sex and sexuality education if passed).

Dr. Logan Levkoff, an internationally recognized expert on sexuality and relationships, encourages honest conversation about sexuality and the role it plays in our culture. "Sex education has a lot of inequalities simply because it depends on where you are," she said during an interview. "You're having populations of young people getting amazing, inclusive, quality sex education, and then you have people getting none." For Levkoff, no sex education is often better than horrible sex education, defined on a spectrum of dehumanization to misinformation. My own education falls somewhere closer to misinformation. When children are taught that the only two possible outcomes are pregnancy or disease, their teachers have done them a tremendous disservice.

One common mistake in American sex education is how condom use is taught. A recent study (8/2021) by Levkoff and Martha Kempner in the American Journal of Sexuality Education found that although most sexual education curricula include discussion of condoms, "our current lessons, which remain rooted in early HIV-prevention efforts, actually perpetuate negative attitudes about condoms—including suggestions that they are difficult to use and an assumption that people dislike condoms." Such findings have major implications as college students return to school for the first time in nearly two years.

I don't obsess over students' sex lives. That's not my job. But I'm acutely aware that their sexual relationships — or what Hirsch and Khan refer to as their "sexual projects" — are often as much a part of their college experience as their coursework. This can be beautiful. Students bring the entirety of their identities into my classroom, from football fandom to Saturday night flings to the coursework that other professors load on them in addition to my own.

But their experiences can also be devastating and life-altering—an outcome that seems unfairly predetermined by which school a child happens to be enrolled in, among other factors far beyond their control. Hirsch and Khan argued that "work with young people needs to begin with a recognition of their right to sexual self-determination." And until there is sweeping change at the local, state, and national levels, school-based sex education gets to make that call for better or for worse.

Christina Wyman is a writer and teacher living in Michigan. Her debut novel "Jawbreaker" is forthcoming with Farrar, Straus and Giroux (2023) and is a Middle Grade book that follows a seventh-grader with a craniofacial anomaly that's caught the attention of her school bullies -- including her own sister. She can be found on Twitter @CBWymanWriter