Weird Al wanted to parody the Wings song "Live and Let Die," but Paul McCartney turned him down 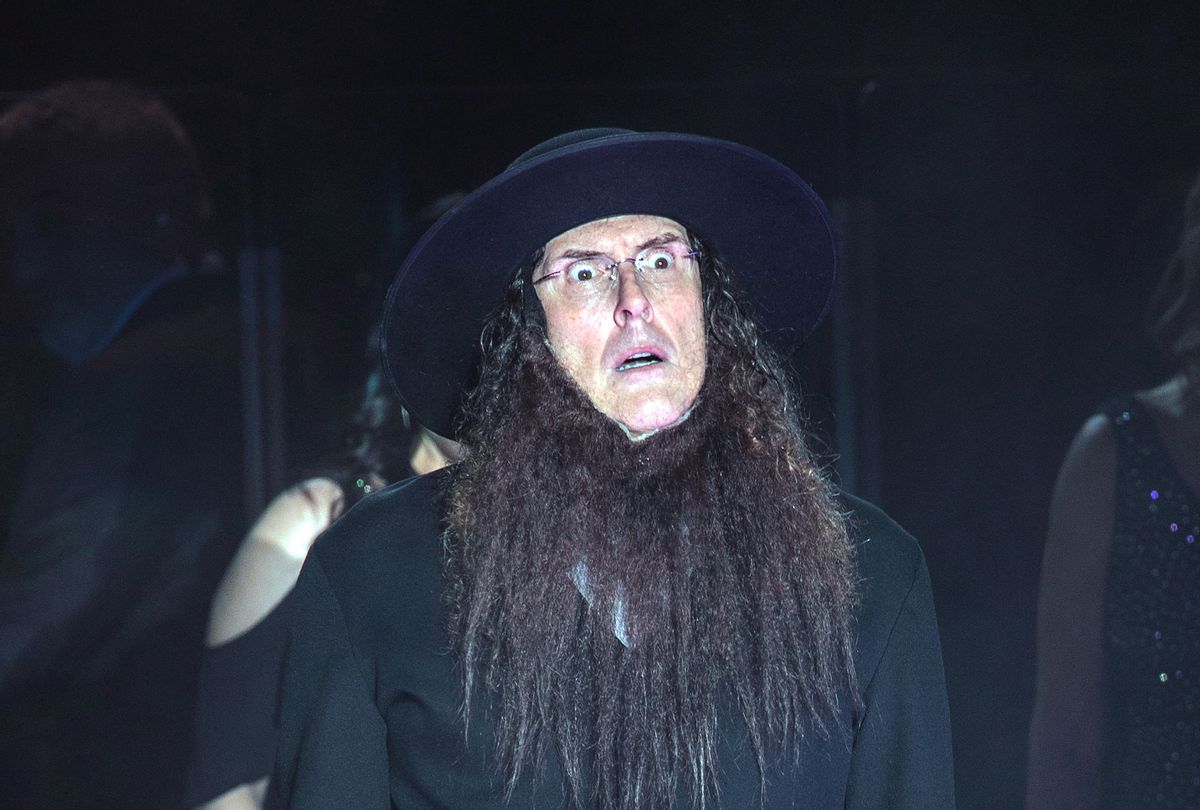 For more than 40 years, "Weird Al" Yankovic has been making hit songs by putting his own, spoofy twist on chart-toppers like "Eat It," "Like a Surgeon," "White & Nerdy," and "Amish Paradise." While the First Amendment and fair use copyright laws mean that Yankovic doesn't have to get permission from the original recording artists to record a parody song, out of courtesy and respect he always does. Which means that he has gotten the occasional "no," as these examples prove.

Weird Al wanted to parody the Wings song "Live and Let Die," but Paul McCartney turned him down. "I wanted to do 'Chicken Pot Pie,' and Paul was a good sport," Yankovic explained. "He said, 'I would love for you to do this, but could you not make it about chicken because I'm a vegetarian. I don't want to condone the eating of animal flesh.'" But "It wouldn't work with 'Tofu Pot Pie.'"

Weird Al still plays bits and pieces of the parody song during his live performances, but he has yet to get permission from McCartney to record it.

In 2003, Weird Al intended "Couch Potato" to be the first single off his then-new album, Poodle Hat. The song was a parody of Eminem's Academy Award-winning song "Lose Yourself" from 8 Mile. While Eminem gave Weird Al permission to parody the song, the rapper denied him permission to use it as a single or make a music video. "Eminem was fine with me having the parody on my album but said he was afraid that a Weird Al video might detract from his legacy, that it would somehow make people take him less seriously as an important hip-hop artist," Yankovic said in an interview.

In response, Interscope Records spokesman Dennis Dennehy said on Eminem's behalf, "It's an important personal piece of music for him, a piece of art. He doesn't mind him doing the song, but he didn't want to change kids' visual perception on what that image was. He wanted to make sure the image would remain intact."

Over the many decades of Weird Al's career, Prince was the one recording artist who never let him parody one of his songs. It wasn't for lacking of trying: Yankovic tried to do spoofs of "Kiss" and "1999" starting in the 1980s without success. "The only person who's consistently said no has been Prince. I haven't approached him in 20 years," Yankovic told Access Hollywood in 2014. "He just wasn't into the parody."

While he's a big fan of Weird Al's music, guitarist Jimmy Page declined Yankovic permission to turn Led Zeppelin songs into a polka medley. However, Page did allow Weird Al to do an interpolation of "Black Dog" in Yankovic's "Trapped in the Drive-Thru," which is a parody of R. Kelly's "Trapped in the Closet."

Yankovic told the Toronto Sun, "It's actually quite a coup that I was able to get Led Zeppelin to let me and my band do that little bit of 'Black Dog' in 'Trapped In The Drive-Thru.' They're famous for not letting people do anything with their music."

Although Weird Al received permission from Interscope Records to parody "Gangsta's Paradise," rapper Coolio didn't give Yankovic consent to write the parody "Amish Paradise." After the Grammy Awards in 1995, Coolio spoke out against the parody, saying, "[I] ain't with that … I think that my song was too serious … I really … don't appreciate him desecrating the song like that … his record company asked for my permission, and I said no. But they did it anyway."

According to Yankovic, it was all a misunderstanding: "Two separate people from my label told me that they had personally talked to Coolio … and that he told them that he was OK with the whole parody idea … Halfway into production, my record label told me that Coolio's management had a problem with the parody, even though Coolio personally was okay with it. My label told me … they would iron things out—so I proceeded with the recording and finished the album."

Since parody falls under fair use, "Amish Paradise" was recorded and became a smash hit in 1996. Years later, Coolio apologized to Weird Al about the misunderstanding surrounding the spoof. "I've since apologized to him," the rapper said. "That was a stupid thing for me to do. That was one of the dumbest things I did in my career."

Although Michael Jackson gave Weird Al permission to spoof "Bad" and "Beat It" into the parody songs "Fat" and "Eat It," respectively, the King of Pop denied Yankovic consent to parody his 1991 song "Black or White." "Michael wasn't quite so into it, because he thought 'Black or White' was more of a message song, and he didn't feel as comfortable with a parody of that one, which I completely understood," Yankovic wrote in Rolling Stone. Though he never recorded the spoof "Snack All Night," he does perform it live from time to time. (Michael Jackson actually shares a co-writing credit with Yankovic on "Eat It.")

In 1996, Weird Al included a number of popular alternative rock songs into one polka medley called "The Alternative Polka." He originally included a snippet of Weezer's "Buddy Holly," but then the band reconsidered. "'Buddy Holly' by Weezer was originally in 'The Alternative Polka,'" Yankovic said on his website. "In fact, it was completely recorded, and we were about to do the final mix when we got a call from Weezer's management—apparently the song's writer, Rivers Cuomo, decided for whatever reason that he didn't want his song in my medley after all, so at the very last minute (after the 'special thanks' had already been printed on the CD and cassette booklets) we had to physically cut the song out of the medley. I'm still kind of bummed about it—it sounded really cool."

Yankovic later released an unmixed and unmastered version of the 23-second section online for free.

In 2006, Weird Al wanted to spoof Daniel Powter's "Bad Day" with the parody "You Had a Bad Date," but the recording artist denied Yankovic permission to record it—at least at first. "And then literally the day before we went into the studio to record 'White & Nerdy,' we got a call saying he changed his mind and he wanted to do it after all," Yankovic told the Toronto Sun. "And I had to inform him that the train had left the station."

After receiving James Blunt's blessing to parody his hit song "You're Beautiful," Weird Al recorded and planned to release the spoof "You're Pitiful" as the first single from his 2006 album "Straight Outta Lynwood"—but Blunt's label, Atlantic Records, stepped in and denied Yankovic any use of the parody because they felt it might hurt Blunt's brand and public image. So Weird Al released "White & Nerdy," a spoof of Chamillionaire's "Ridin,'" as the first single instead—then released "You're Pitiful" online for free.

"I have a long-standing history of respecting artists' wishes," Yankovic wrote to NPR. "So if James Blunt himself were objecting, I wouldn't even offer my parody for free on my website. But since it's a bunch of suits—who are actually going against their own artist's wishes—I have absolutely no problem with it."

In 2011, Weird Al jumped through a number of hoops in an effort to get approval to turn Lady Gaga's hit "Born This Way" into a parody called "Perform This Way" for his 14th studio album: When her management team demanded to hear the track before granting permission, Yankovic wrote and sent them the lyrics. They responded, "She actually needs to hear it. Otherwise the answer is no." Even though he thought Gaga should know what the song sounded like—because it was, after all, her song—Weird Al recorded the song and sent it over.

The answer, her camp told him, was no.

Yankovic posted the song on YouTube anyway. "After putting my Lady Gaga parody on YouTube this morning—and announcing that it wouldn't be on my next album because Gaga didn't approve it—there was a huge outpouring of disappointment from the Internet," he wrote on his blog. "Apparently the fact that she didn't approve it was news to Lady Gaga herself!" It turned out that Gaga's manager had made the decision to say no, but Gaga loved the parody, which ended up on Yankovic's album—with all of his proceeds from the song and music video going to the Human Rights Campaign. Gaga herself would later call the parody "empowering" and a "rite of passage."