Paula Hawkins’ "The Girl on the Train" has sold 23 million copies, and the film adaptation was a box office smash 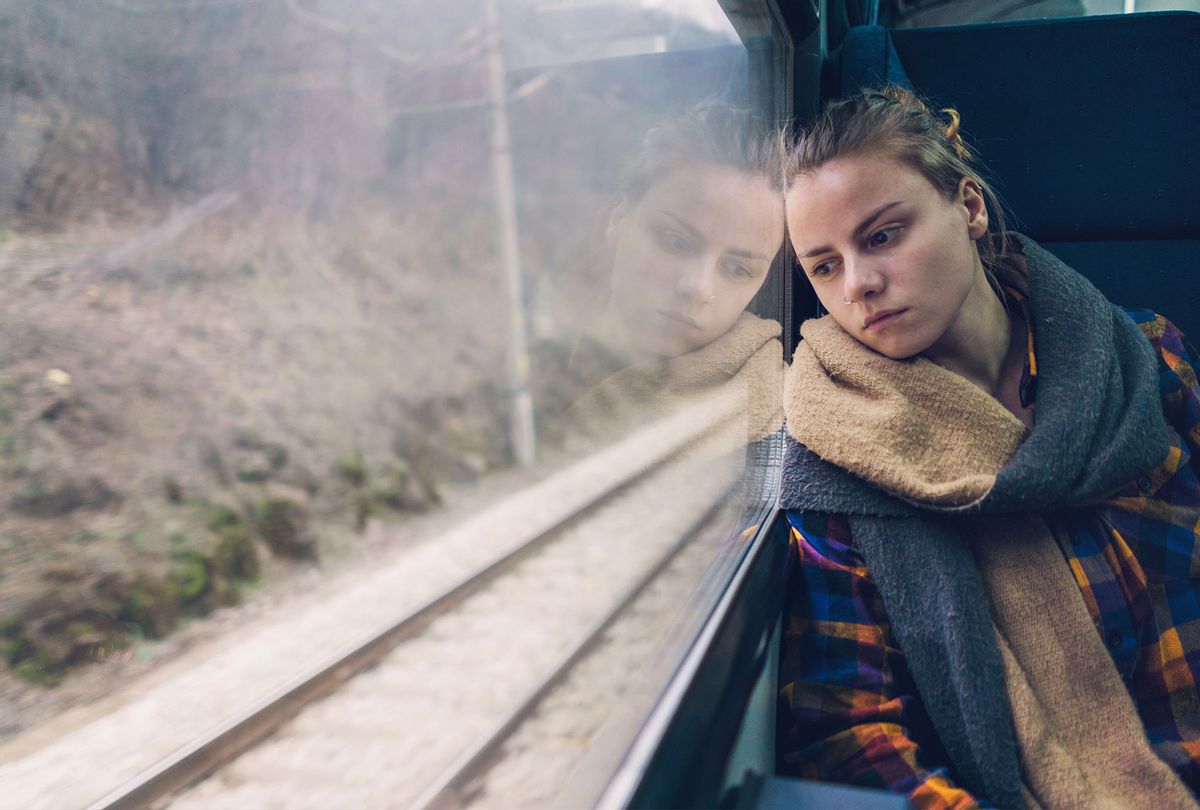 Woman looks outside a train window while traveling﻿﻿ (Getty Images/Mixmike)
--

Along with Gillian Flynn's "Gone Girl" (2012), Paula Hawkins' "The Girl on the Train" (2015) helped establish the flawed anti-heroine as the rising star of psychological suspense fiction.

These novels are the most prominent examples of the growing genre of "domestic noir." Focusing on the moral chaos of modern life, these psychological thrillers, written largely by — and for — women, expose the secrets, lies and betrayals at the heart of intimate relationships and family networks.

As a writer and a psychotherapist, I'm fascinated by human nature, and I love reading about the problems of ordinary women. But, too often, domestic noir fiction aligns female aggression with madness, death and terror.

"Gone Girl," "The Girl on the Train" and many other books of the genre prioritise unhelpful stereotypes over more subtle psychological states. They fuel assumptions about the proximity of women to emotional breakdown, feeding the exploitative mythologising of women's mental health problems in the name of entertainment.

Don't get me wrong, I'm not asking for happy endings. I just prefer a more sophisticated scenario in which the dark fantasies and troubled emotions of heartbreak and trauma do not become the fuel for psychosis. A thriller where women don't all hate each other; where the only way out isn't to murder someone.

Surely there's more to be done with a flawed anti-heroine than that?

The penny seems to have dropped for Hawkins. This month sees the publication of her latest book, "A Slow Fire Burning," another twisty murder tale addressing the impact of trauma on women's lives.

Like its predecessor, the book's female protagonists are emotionally scarred and full of rage. But while "The Girl on the Train's" Rachel Watson was defined by mental instability, Hawkins' new characters are powerfully angry women whose fury leads them past the point of personal collapse.

Into the domestic noir

British author Julia Crouch coined the phrase "domestic noir" in 2013 to distinguish her own novels from the broader sweep of crime thrillers. These books are now big business in the publishing world.

"The Girl on the Train" has sold 23 million copies in over 50 countries, with "Gone Girl" keeping pace.

Film adaptations of both novels — together with prestige television productions of books such as "Little Fires Everywhere," "Big Little Lies," "The Undoing" and the forthcoming "Anatomy of a Scandal" — are all part of the genre's success.

Flynn and Hawkins are joined by authors like Celeste Ng, Christobel Kent, Liane Moriarty and Jean Hanff Korelitz. These writers interrogate the false security of nuclear households and suburban communities, exploring the cultural conditions that lead people into difficult situations.

In their novels, women get angry. They stand up to abusive men and treacherous friends, they fight for their families and children, they challenge the law.

Struggling with dangerous environments, they take on the role of vigilante in the name of self-defence and self-preservation.

In Moriarty's "Big Little Lies" (2014), Bonnie saves her friend from a violent husband by inadvertently pushing him to his death. In Kent's "What We Did" (2018), Bridget is trying to protect herself when she accidentally kills her former childhood abuser.

These women aren't mad. They aren't paranoid, sociopathic or delusional. They're not drunk or on drugs. They have been violated and traumatised, and are triggered in the face of an oncoming threat. Some of them are terrified. All of them are angry.

The appeal of domestic noir's anti-heroines lies in their bad behaviour. They don't care about pleasing others or being nice.

But what happens when they lose their minds?

The women who go mad

Some of the novels in this genre might better be described as "girl gone mad" melodramas. In "Gone Girl," Amy Elliott Dunne is a homicidal narcissist who frames her husband for her own murder and attacks herself with a broken bottle to make a false rape claim.

In "The Girl on the Train," Rachel Watson is a compulsive liar and an alcoholic with a tenuous grasp on reality, who ends up driving a corkscrew into the neck of her abusive ex-husband.

After the release of these books, both characters divided opinions. The authors were criticised for portraying women as disempowered and destabilised by marital breakdown. Instead of becoming independent from their cruel and cheating husbands, Amy and Rachel each go thundering off the tracks.

In response to such critiques, Flynn told The Guardian she "doesn't write psycho bitches".

"The psycho bitch is just crazy — she has no motive, and so she's a dismissible person because of her psycho-bitchiness," she said.

But does a "motive" justify the damaging stereotype of Flynn's depictions of crazed female fury?

Whether you see them as riotous feminist icons or pitifully reliant on men, one thing seems clear: the only way for Amy and Rachel to get angry is to forego their sanity.

It is all very well for Flynn to say her women aren't "psycho bitches", but in our society, anger is considered to be unfeminine and socially unacceptable. In "Rage Becomes Her: The Power of Women's Anger" (2018), a journalistic exploration of the history of women's fury, Soraya Chemaly argues the angry woman is perceived as "hostile, irritable, less competent, and unlikeable."

No wonder so many girls learn to become passive aggressive when outbursts of female anger are judged as crazy. Arguably more damaging in the long term, it seems safer for women to quietly seethe.

Instead of challenging these ideas, "girl gone mad" dramas reinforce them.

The women who get mad

Some of the best domestic noir novels, in contrast, tackle the psycho bitch problem by dispensing with violence altogether.

Instead, their anti-heroines respond to what author Harriet Lane calls "the tiny little cruelties and apparently benign interactions that we so easily inflict on each other."

Each of Lane's own protagonists — Frances Thorpe in "Alys Always" (2012) and Nina Bremner in "Her" (2014) — is psychologically impacted by the stuff of dysfunctional family life. Frances is sick of being sidelined and uses a stranger's death to better herself. Nina blames a teenage friend for her parents' divorce and seizes an opportunity for revenge.

Both women are jealous and resentful, bitter and blaming. But instead of becoming unhinged by murderous obsessions, they execute careful and intricate plans without spilling a drop of blood.

Equally powerful, Sarah Vaughan's bestselling legal thriller, "Anatomy of a Scandal" (2018), continues the #MeToo conversation by re-framing the victim as a gutsy agent in her own recovery. Deceitful, brave and morally questionable, sexual offence prosecutor Kate Woodcroft holds onto her mental clarity while risking her career — and her fragile emotional state — for an outcome she cannot predict.

These painful stories show how vulnerable women are prone to misdiagnosis, social neglect and sexual exploitation. They highlight the need for an improved understanding of trauma, especially within our medical and legal systems where the physical and psychological symptoms of such conditions can be overlooked or misdiagnosed and sufferers treated inappropriately.

In these books, women get mad but don't go mad. Trauma is something they live with — often messily, often while making mistakes — and it shapes their flawed humanity.

Hawkins' new novel, happily, is more aligned with this style of domestic noir narrative: presenting a nuanced picture of the female psyche.

A cleverly crafted whodunit beginning with a brutal killing, "A Slow Fire Burning" revolves around an interconnected cast of damaged individuals. Among these are Laura Kilbride, unpredictable and prone to aggressive outbursts; and Miriam Lewis, a mistrustful, eccentric 50-something who lives on the margins of society.

Both women are angry and disturbed, but instead of depicting them as "mad," Hawkins uses their complicated situations to pose questions about society's treatment of complex trauma.

For years, Laura has been told by psychologists her issues are due to brain damage from a hit-and-run accident when she was ten. But she's smart enough to know the context and circumstances of the accident are just as much to blame.

Miriam, meanwhile, is ostracised and regarded with scorn, but her eccentric lifestyle lets her go under the radar. She cleverly uses this to claim retribution for the horrific assault she suffered in her teens.

Satisfyingly, Hawkins' new characters refuse to be intimidated by authority, finding ways to be resourceful and aggressive instead of becoming compliant.

The pain of reflection

Troubled women don't lend themselves to happy-ever-afters, and none of these more involved novels finish on a neat and tidy note. It wouldn't be convincing if they did. Instead, the characters manage to navigate their way through psychological pain and emotional danger without descending into psycho-bitchiness.

They take control of their lives, seizing their opportunities and shaping their own destinies — even as they make terrible mistakes. They may be unlikeable and unreliable, but by staying sane they are also uncomfortably relatable.

As author Jill Alexander Essbaum says: "you may not like her, but you can't look away because you recognise a little sliver of yourself in her."

This cannot be said about Amy in "Gone Girl" or Rachel in "The Girl on the Train. "The best sellers of the genre, with their focus on the stereotypical "madwoman," invite the reader to view misery salaciously from a distance.

The bystander appeal may be comforting — there but for the will of god — but it raises the spectre of schadenfreude. There's something disturbing about a story that tracks a character's mental and emotional decline for thrills.

When I turn to domestic noir, I hope to find an anti-heroine who doesn't succumb to her predicament. I want her to transcend it. This kind of character isn't a rampaging hysteric. She is a complicated, difficult, vengeful woman who gets angry without going mad. A hot, smart mess, readers can both identify with, and live through vicariously.

On the page, what could be more thrilling than that?

A Slow Fire Burning, out 31 August, is published by Penguin.