I'm from Baltimore. I don't eat imitation crab. But even in Charm City, I find myself surrounded by the fake stuff 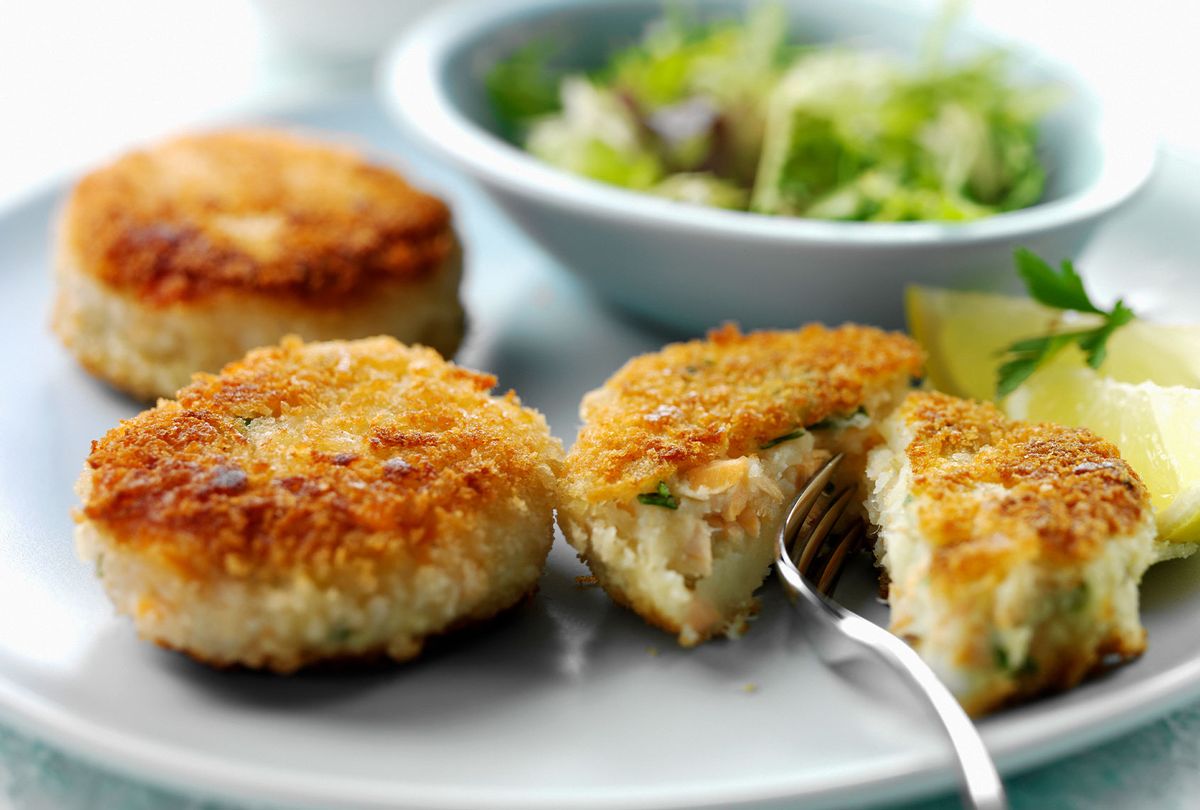 Back when my wife Caron and I were engaged, she volunteered some startling information about herself: She makes her seafood salad with fake crab.

"You need the imitation crab meat to make a good seafood salad," she told me. "It enhances the flavor!"

My mind went dark. I began to question my relationship with Caron, our engagement, and the life we planned on spending together. How could a woman I loved so much say something so offensive, so hurtful, so painful? I hadn't even asked her about seafood salad — she brought it up. We had been having a great night and she just ruined it, for no reason at all. I prayed that she was joking, but she wasn't.

I know this may sound dramatic, but I am not overreacting. We are from Baltimore, home of the best crab meat in the universe. That is not up for debate. Baltimore's crab cakes are so good people come from all over the world to eat them. So good Oprah has them delivered across the country. So good I would never ever eat a crab cake in another city, state or country, and Caron knows this. So where did this allegiance to fake crab meat come from? Was she sick? Should I drug test her? Did she own stock in a krab company? Do I even know this woman?

Her unexpected comments did more than ruin our night and draw a permanent wedge in the food side of our relationship. They pushed me back into the darkness of my adolescent years, where I first learned about crabsticks.

One morning when I was just a kid, I woke to Luther Vandross screaming, "Never too much, never too much, never too much!" from the flat speaker propped in the kitchen window. Old Bay, mixed sizzling crab meat, something cinnamon, and a fruity aroma pulled me out of bed and toward the kitchen. I cut through the clouds of fog — Dad was excellent behind the stove, but he always cooked with the jets on high, leaving the batteries in our smoke detector dead — and landed next to my father, gently placing fried crab cakes into a bowl layered with a napkin or two to soak up the grease.

"Crab cakes, crab balls, seafood salad, and a 7 Up cake," he answered, restarting song to the beginning. "I can't fool myself, I don't want nobody else to ever love me," Luther sang, my dad two-stepping and spinning between the sink and stove.

I never asked Dad to teach me how to cook or even how to help. It's not that I didn't have an interest, because I did. I just never wanted to bother him. He looked so happy in the kitchen, so at home, smiling like Michael Jordan after he hit the game-winning shot. The way Dad would mix peppers and spices, season the food then taste, season and taste again, sometimes sniffing and adding a dash of this and a dash of that, sweating, while dancing to the music and celebrating his creations — I did not want to get in the way of that. Also, dinners like this seafood feast, they weren't really for us; usually he cooked like that for a family function, or one of his Narcotics Anonymous meetings, or some other special event. Dad did cook for us when he had the time, but he worked and ripped and ran a lot, so I grew up eating out of corner stores and carry-outs mostly. I knew if Dad was into making a meal at this level, with this much seafood, then something special had to be going on.

"Try this, I did something a lil different," Dad said, scooping up a hunk of seafood salad onto a paper plate and. I stabbed into it with my fork and pulled out a nice-sized shrimp covered with his trademark mix, the perfect combination of sweet and spicy with a crunch. Dad the seafood master, I thought, as I started to devour the rest.

I should mention that eating seafood salad is a big deal to me, because the base is always mayonnaise and I hate mayonnaise more than anything. But whatever Dad cut the mayo with was so good I would almost forget it was held together with that awful condiment. As I enjoyed his godly salad — shrimp, crab meat, seasoning, how it all mixed together — I came across an unidentifiable chunk. It was smooth — almost too smooth. I took a piece of my paper towel, wiped Dad's mix off and slowly examined the strange protein from all sides: chalky white on one side, light red on the other.

"That's crab meat," he said placing the huge 7 Up cake on a glass plate and covering it with two layers of aluminum foil.

I'm only nine years old, but by that time I'd eaten plenty of crabs in many forms — crab dip, jumbo lump crab cakes, snow crab legs so hard my mom had to break them open for me, crab pasta, crab stew, crab pretzels, and even crab potato chips — and I had never, ever seen or eaten anything like this.

"This crab stuff," I said. "Is this the new ingredient?"

"Yeah boy, you like it?" Dad said as he tossed a huge package of it onto the kitchen table. I studied the contents — long sticks of smooth meat — with disgust. Then I unzipped the plastic and took a healthy sniff. It gave me Play-Doh mixed with tuna, sprinkled in plastic.

Dad always got a big laugh out of me using profanity, a bad habit that started back when I was five years old, repeating Eddie Murphy's '80s stand-up routines, so I didn't get in trouble. But he did get mad at me for trashing his special new ingredient.

"You sound like a lil snob," Dad scoffed. "You too good for fake crab sticks?"

I didn't have the language in that moment, but I had a feeling — a very strong feeling. And if I can articulate that feeling today, it would sound like this: "Yes, Dad! I am too good for imitation crab meat. And if that makes me a snob, I'm OK with that!"

Imitation crab meat is available in a few forms: sticks (like Dad used), shredded and flaked. The main ingredient is surimi — a processed gel made from inexpensive whitefish — mixed with water, starch, sugar, egg whites, vegetable oil, salt and additives, which can include gums, red colorants, glutamates (I do not know what that is), real crab extract, artificial crab flavorings, mirin and sodium benzoate. So it is made from seafood, but the result isn't crab. It's a whole other thing.

Dad would tried to get me to understand the flavor and the quality introduced into his recipe by this new texture, not to mention the price difference, as he tried to convince me why imitation crab meat made so much sense. But something inside me would never listen or be able to conform. Maybe because I'm from Baltimore, home of jumbo lump crab meat — the kind of glorious, fluffy, chunky bright white crab meat I'd risk my life for, and I'm extremely proud of that heritage. After my dad introduced me to counterfeit crab, I started noticing it spreading throughout my neighborhood. Not just my aunts and grandma, but friends and family members, too — all started popping up with fake crab meat by the boat load. I would go to my neighbor's house and open the refrigerator only to see bricks on bricks of fake crab sticks on ice. Guys were selling it on a corner and out of car trunks.

Even the owners of my favorite Korean food spot gave me a free order of fried imitation crab sticks to go with my weekly box of shrimp fried rice with extra shrimp. "Hello, no!" I said, and gave them back and ran out of the store with my rice. I did not see an end in sight. I became suspicious; at cookouts and parties and events I'd walk past the seafood salad as if it were as pointless as potato or macaroni salad. (Yes, I am a Black person who hates all mayonnaise-based salads except seafood.) Big plates of seafood salad once allowed me to survive social functions without people looking at me and saying, "What kinda crazy person doesn't eat potato salad?" Imitation crab entering my life forever robbed me of that bit of normalcy.

In seafood heaven, I thought but did not say.

After having a long talk with myself, I decided not to let seafood salad ruin our relationship. After all, both my dad and my wife love imitation crabmeat. It makes them happy, and they're not alone. It's a long established ingredient in Japanese and other Asian cuisines, with its own preparations and place at the table.

If Caron makes her version of seafood salad, I can decide to eat out, and we will both be OK with that. That's how I handled Dad's incorporation of the sticks into his salad. But I would be lying if I told you I did not miss it. Yes, I still hate fake crabmeat, but I miss my Dad's cooking. Or I miss watching him cook and seeing how happy it made him. Dad moved away in 2008, then kidney failure brought him back to Baltimore in 2017. Since then he's had multiple surgeries, a stroke, brain hemorrhaging, and was hospitalized for over a year. His memory is coming back now, but he hasn't gathered the strength to dance and cook like he used to. I'd do anything to see him happy in the kitchen one more time. I'd eat a whole bowl of fake crabmeat.

The only way for me to reclaim the feeling I got from my father's original salad is to offer my own recipe. If you're looking for precise measurements or specific instructions, I don't cook like that. Everything must be eyeballed. Feel and taste your way through it.

Mix together the following ingredients: