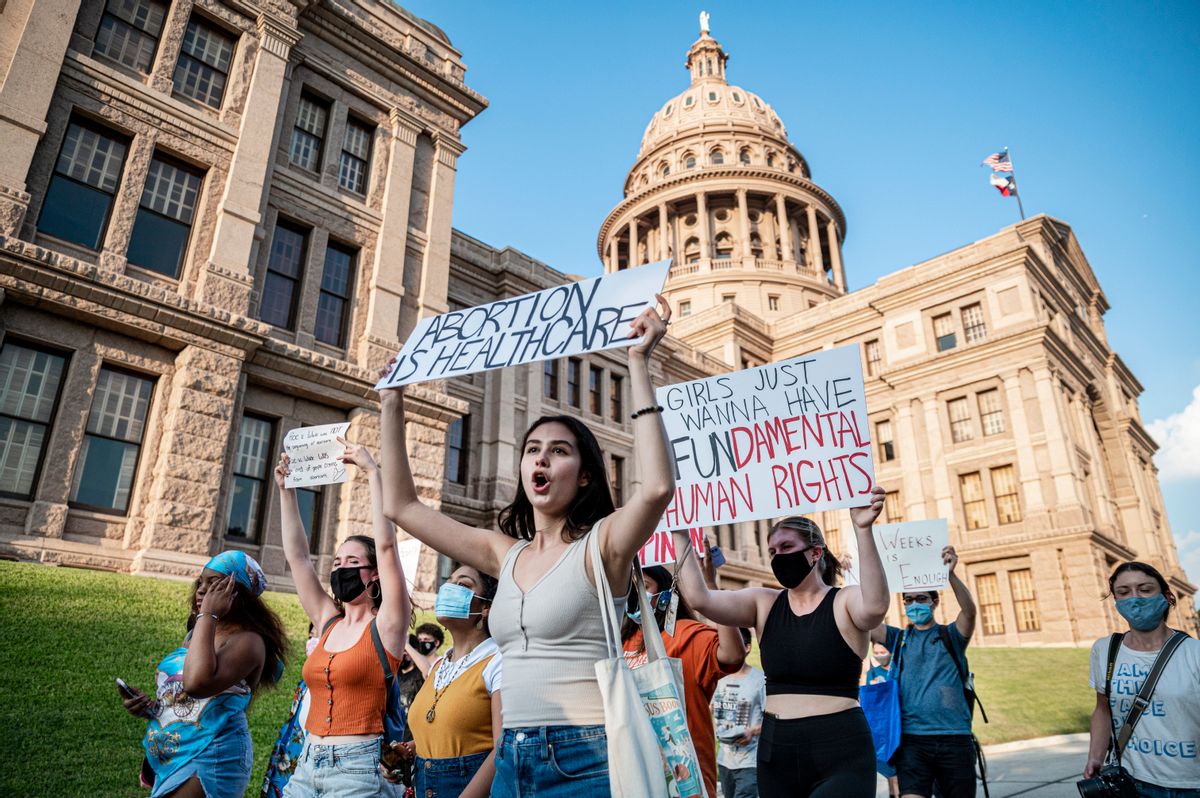 Pro-choice protesters march outside the Texas State Capitol on Wednesday, Sept. 1, 2021, in Austin. (Sergio Flores for the Washington Post via Getty Images)
--

One of the many preposterous claims coming from supporters of the vicious new Texas law against abortion is that bounty hunters — who stand to gain a $10,000 reward from the state — will somehow be "whistleblowers." The largest anti-abortion group in Texas is trying to attach the virtuous "whistleblower" label to predators who'll file lawsuits against abortion providers and anyone who "aids or abets" a woman getting an abortion.

As a journalist and activist, I've worked with a range of genuine whistleblowers during the last several decades. Coming from diverse backgrounds, they ended up tangling with institutions ranging from the Pentagon and CIA to the National Security Agency and the Veterans Administration. Their personalities and outlooks varied greatly, but none of them were bullies. None of them wanted to threaten or harm powerless people in distress. On the contrary, the point of the whistleblowing was to hold powerful institutions accountable for violations of human rights.

What the Texas vigilantes will be seeking to do is quite the opposite. The targets will be women who want abortions as well as their allies — people under duress — with pursuers seeing a bullseye on their backs.

The whistleblowers I've known have all taken huge risks. Most lost their jobs. Many endured all-out prosecutions on bogus charges, like violating the Espionage Act for the "crime" of informing the public with vital information. Some went to prison. Almost all suffered large — often massive — losses that wrecked their personal finances.

In sharp contrast, the Texans trying to cash in on the new law will risk nothing. While collaborating with the state to spy on the lives of others, they will be striving to enrich themselves.

"The state law created a so-called 'private right of action' to enforce the restriction," in the words of a CNN report. "Essentially, the legislature deputized private citizens to bring civil litigation — with the threat of $10,000 or more in damages — against providers or even anyone who helped a woman access an abortion after six weeks."

Calling those who exploit this law "whistleblowers" is a way to turn the true meaning of whistleblowing on its head. We might as well have history books referring to enforcers of the Fugitive Slave Act as "good Samaritans," or monitors of Jim Crow compliance as "civic activists."

It's fitting — and revealing — that the professed "whistleblowing" website thrown up by the big Texas Right to Life organization was welcomed by an internet provider that specializes in hosting services for extreme far-right groups. Thanks to a provider called Epik, the Daily Beast reported, the site "found a new home alongside neo-Nazis and white supremacists." The digital relocation came after the site was booted by GoDaddy on Friday. But before the end of the weekend, even Epik backed away.

One of the enormous dangers of the Texas abortion law is that a Stasi-like culture of betrayal and fear will evolve in the Lone Star State and copycat states, with long-lasting destructive effects. If a friend, neighbor or co-worker can turn someone in and gain a reward for doing so, the ripple effects are going to be corrosive, intensifying over time.

Aided by the U.S. Supreme Court, the state of Texas has now codified misogyny. The results will surely include ongoing deaths, making the coat hanger the state's unofficial symbol. Real whistleblowing will expose those who profit from victimizing women under cover of this horrible new law.