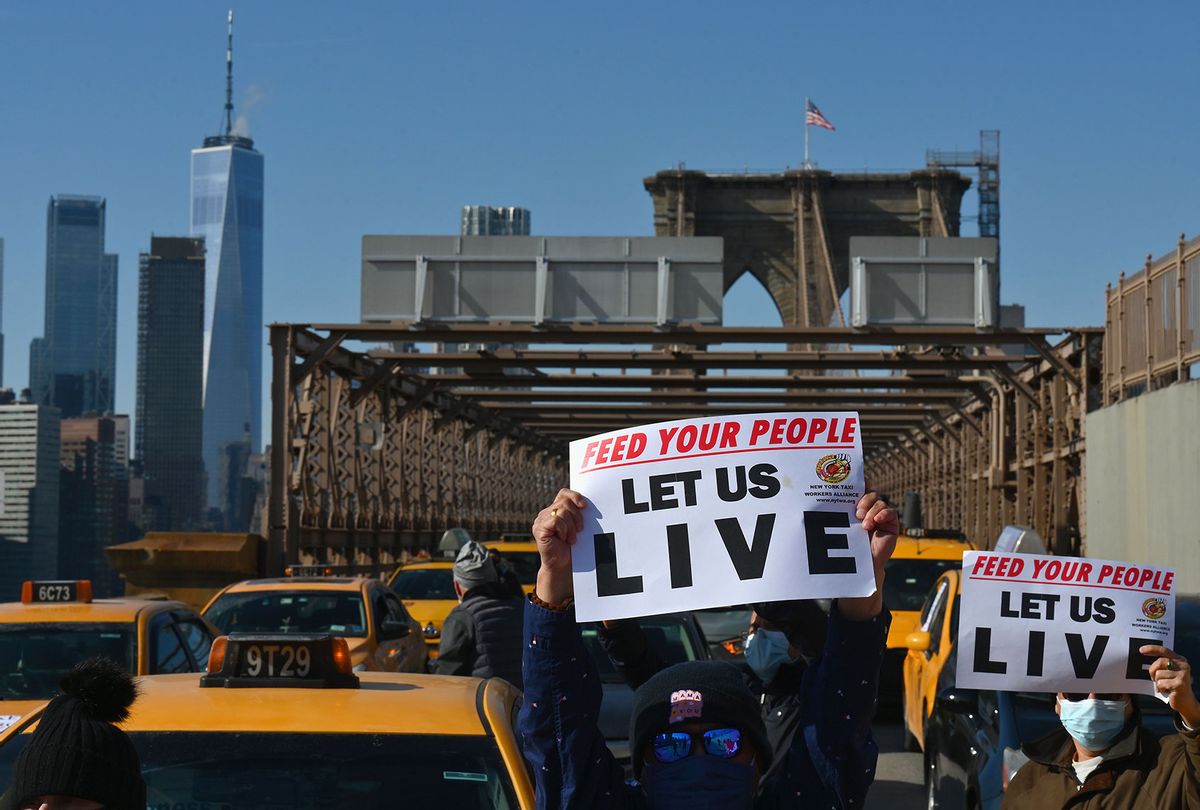 Federal unemployment benefits for more than 7 million laid-off workers expired on Labor Day, plunging tens of millions of households into uncertainty amid a surge in delta-variant COVID infections.

Three federal pandemic unemployment programs ended on Monday, cutting off all benefits to more than 7.5 million households and reducing benefits for another 2.7 million, according to an analysis by the Century Foundation, a nonpartisan think tank, though Labor Department numbers show that 9.2 million people are currently receiving benefits from the programs. Because the average household receiving benefits has about 3.8 people, the cuts could affect more than 35 million people, according to an analysis by the People's Policy Project.

It's a much earlier cut-off than in previous economic crises. After the 2008 Great Recession, various unemployment programs were extended through 2013 and only 1.3 million people were still on the rolls when they ended.

"Welcome to America, where lawmakers chose to kick 9 million jobless Americans off unemployment benefits on Labor Day, during a pandemic," tweeted former Labor Secretary Robert Reich, calling for an extension of the programs.

There has been no pushback by the Biden administration and few members of Congress have called for an extension of the benefits. The cuts come just weeks after congressional moderates killed a last-minute effort to extend the pandemic eviction moratorium. The Biden administration tried to unilaterally extend the eviction ban but was blocked by the Supreme Court, leaving more than 3.5 million households at risk of eviction, according to an estimate from Goldman Sachs.

The Biden administration reportedly sees the end of the unemployment benefits as part of its economic recovery plan in hopes that it sparks a wave of hiring. But the cuts come after the country recorded 4 million new Covid cases in just the last four weeks and experts believe the real number is much higher. Some states, particularly in the South, are facing alarming ICU shortages.

Many Southern Republican-led states already cut off unemployment benefits. Half of all states ended the weekly enhanced benefit over the summer, arguing that it would boost hiring. But those states have seen no increased job growth compared to states that maintained benefits until this month, according to a Wall Street Journal analysis. While economists believe that the enhanced benefits caused some people to not return to the labor market, they also point to child care responsibilities, fear of infection, and other factors for contributing to slow hiring. More than 5 million people say they're not working because they are caring for a child who is not in school or day care, according to the most recent Census Bureau Household Survey, and another 3.2 million say they are worried about Covid spread.

Though there has been little desire among Congressional Democrats to extend the benefits, some progressives are calling for an extension to be included in the Democrats' $3.5 trillion budget reconciliation bill that is expected to be completed this month.

"States that cut off federal unemployment benefits early did not see people return to work," tweeted Rep. Cori Bush, D-Mo. "Why? Because we don't guarantee child care. Because we don't have a vaccine for kids under 12. Because we're in a pandemic."

While some in Washington hope that the expiration will help boost small businesses and grow the workforce, some research suggests that it could have the opposite effect by cutting consumer spending, at least at first. States that cut unemployment benefits early lost about $2 billion between June and August as consumer spending fell by 20%, according to a recent paper published by the National Bureau of Economic Research.

"There wasn't a huge difference in the rate at which they returned to work," Michael Stephner, an economist at the University of Toronto and one of the paper's authors, told NPR. "There was a huge difference in the amount of benefits these workers received and the amount of money that they spent in their local economy… Taking away their benefits is not going to send them back to work. It's really going to increase poverty and reduce people's spending."

The Biden administration said that individual states can use pandemic relief funds to extend unemployment benefits on their own but so far no state has announced plans to do so. Inside the administration, there was significant differences of opinion between Biden, who supports the expiration, and senior officials on the White House National Economic Council, the White House Council of Economic Advisers, the White House Office of Management and Budget, and the Labor Department, who believe the cut-off poses "a serious danger to millions of Americans who remain out of work," according to the Washington Post. "There's a lot of anxiety internally right now, particularly given delta [variant], about going over the cliff — much more than there was two months ago," a senior administration official told the outlet.

Some lawmakers tried to push to extend two of the three expiring programs while allowing the main one to lapse.

"At the White House staff level, there's a ton of support for focusing on at least trying to extend additional weeks for gig-workers and self-employed workers," a senior congressional Democratic aide told the outlet last week. "But they're not trying."

The White House is instead focused on passing the Democratic spending bill, which would extend child tax credit benefits for families among other measures. And the administration has pointed to the 10 million job openings that currently exist.

"We think the jobs are there," White House chief of staff Ron Klain told CNN on Sunday, "and we think the states have the resources they need to move people from unemployment to employment."

But while growing wages and the child tax credit may offset some of the cuts, "the increases in various other categories of personal income will not be enough to offset the hit from jobless benefits going away," said economists at Wells Fargo, estimating that the expiration will cause a $29 billion decline in personal income.

"It's clear from the economic and health conditions on the ground that we shouldn't be cutting off benefits now," Senate Finance Committee Chairman Ron Wyden, D-Ore., said last week.

Federal policymakers were betting that the job market would return to normal over the summer but the latest disappointing jobs report, which missed its target by more than a half-million jobs, shows that the delta variant is "poised to threaten the pace of job growth," warned Andrew Stettner, a senior fellow at the Century Foundation, urging Congress to extend the benefits at least in high-unemployment states.

"The unwillingness to extend emergency benefits—or even debate it," he wrote, "shows how inured we've become to plight of the unemployed."