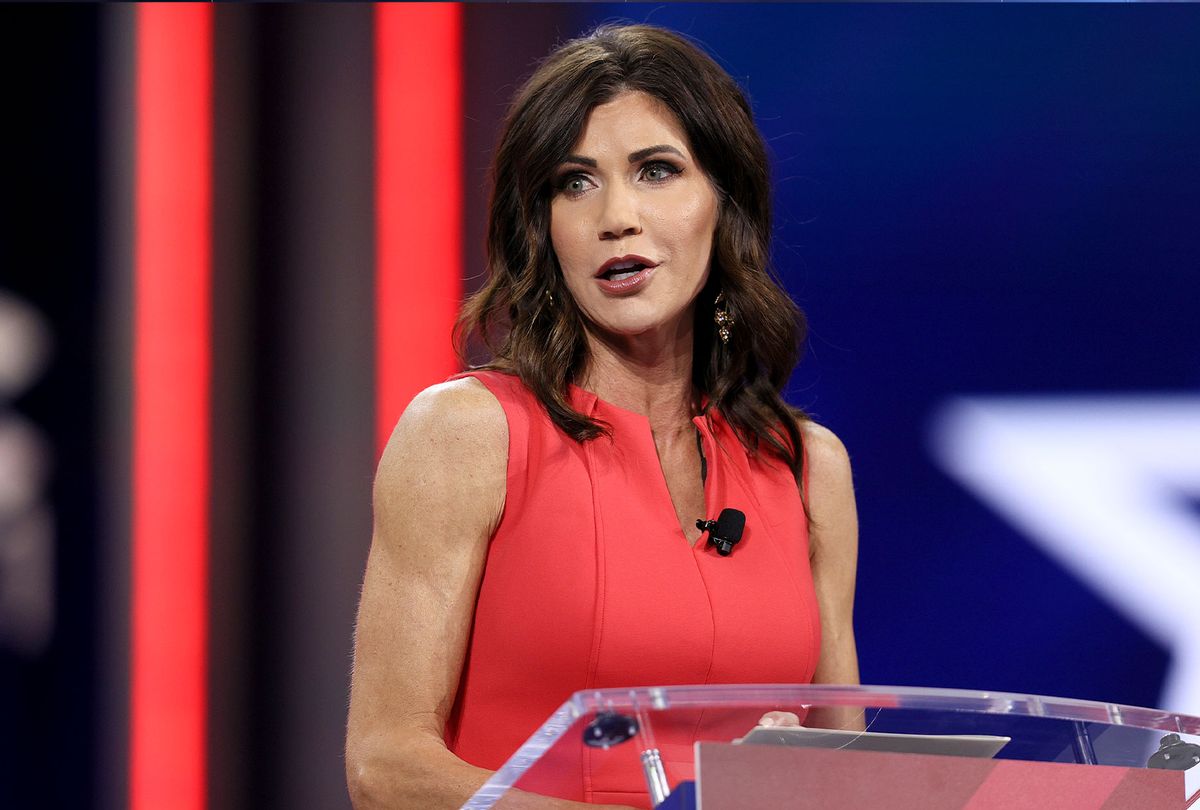 South Dakota Gov. Kristi Noem, a Republican, signed an executive order on Tuesday restricting abortion medication after directing her "unborn child advocate" to find ways to "immediately review" Texas' new near-total abortion ban and "make sure we have the strongest pro-life laws on the books" after conservatives emboldened by the Supreme Court's refusal to block the law launched a new push to crack down on abortion access.

Noem's top legal adviser, Mark Miller, was deployed to find areas where the state's abortion laws could be "tightened to mimic or go beyond" the Texas ban, according to the Argus-Leader. On Tuesday, the governor took her first step to tighten the state's laws, restricting telemedicine abortions and abortion medications. The executive order bans abortion medication from "being provided via courier, delivery, telemedicine, or mail service" and on state grounds or in schools. It also requires that abortion medication only be prescribed or provided after an in-person examination by a doctor licensed in the state.

Texas lawmakers passed similar legislation separate from the so-called "heartbeat" ban to restrict abortion medication access earlier this month that is now awaiting Gov. Greg Abbott's signature. Noem in her order called on the state legislature to codify the restrictions into law next term.

The Food and Drug Administration previously required the abortion medication Mifepristone to be dispensed by a certified medical provider but earlier this year suspended enforcement of the in-person requirement to reduce the risk of Covid spread amid the pandemic.

"The Biden Administration is continuing to overstep its authority and suppress legislatures that are standing up for the unborn to pass strong pro-life laws. They are working right now to make it easier to end the life of an unborn child via telemedicine abortion. That is not going to happen in South Dakota," Noem argued in a statement. "I will continue working with the legislature and my Unborn Child Advocate (Mark Miller) to ensure that South Dakota remains a strong pro-life state."

"We know most South Dakotans support the right to safe, legal abortion, but Noem is following a vocal minority that is attacking abortion, contraception, and comprehensive sexual education in this country," Kristin Hayward of the Planned Parenthood Minnesota, North Dakota, South Dakota Action Fund told the Argus Leader.

South Dakota already only has just one clinic in the entire state that regularly performs abortions and 39% of abortions last year were done through medication, according to the Associated Press. Reproductive health advocates warned that the order would disproportionately impact rural residents who live far from an abortion provider.

"Having an abortion is a private medical decision, one that is protected under the U.S. Constitution, and it's disappointing that Gov. Noem continues to insert herself into the patient-doctor relationship," Janna Farley, a spokesperson for the American Civil Liberties Union of South Dakota, told the outlet. "It's clear that the attacks on our abortion rights are not letting up in South Dakota."

Noem is one of a growing number of Republican state officials who have seized on the Supreme Court's abdication in the Texas case to push for a similar ban. The Texas law bans all abortion with no exemptions for survivors of rape or incest before most women know they are pregnant. Unlike other bans that have been struck down by the courts, the Texas law would be enforced by a vigilante-style system that allows nearly anyone to sue any abortion provider or anyone who helps a woman get an abortion, including relatives or cab drivers, and win at least $10,000 with no penalty if the suit fails.

The Supreme Court is also set to hear arguments over a Mississippi law that bans nearly all abortions this fall that advocates worry could result in the increasingly right-wing court overturning Roe v. Wade.

Two-thirds of Americans back the Roe decision, according to a recent Quinnipiac poll. Amid the rise of draconian abortion restrictions in the United States, other countries in the Americas have been moving the opposite direction. Argentina last year legalized abortion and Mexico's Supreme Court on Tuesday ruled that the country's criminalization of abortion was unconstitutional, which advocates believe will reverberate across Latin America. Meanwhile, Canada has allowed an abortion at any stage of pregnancy for decades.

The Supreme Court refused to immediately block the Texas law on procedural grounds, meaning that law will still be reviewed by the courts in the future. But abortion clinics in Texas have already been forced to turn women away, which advocates fear will not reduce the number of abortions but instead force women without the resources to seek an abortion out of state to resort to risky procedures.

Attorney General Merrick Garland on Monday vowed to "protect" women seeking an abortion in Texas using a 1994 law that ensures access to abortion clinics, though that law is limited to threats and physical obstruction that may prevent women from gaining access to a facility.

"We will not tolerate violence against those seeking to obtain or provide reproductive health services," Garland said. "The department will provide support from federal law enforcement when an abortion clinic or reproductive health center is under attack."

President Joe Biden called the Texas law "un-American" and vowed a "whole-of-government effort" to respond to the ban.

"The Texas law will significantly impair women's access to the health care they need, particularly for communities of color and individuals with low incomes," Biden said in a statement, adding that "this extreme Texas law blatantly violates the constitutional right established under Roe v. Wade and upheld as precedent for nearly half a century."