What year is it in America, anyway? How complacency and naiveté brought us to this crisis

Roe v. Wade is dead. The assault on democracy is unrelenting. Our worst enemy may be the sense of disbelief 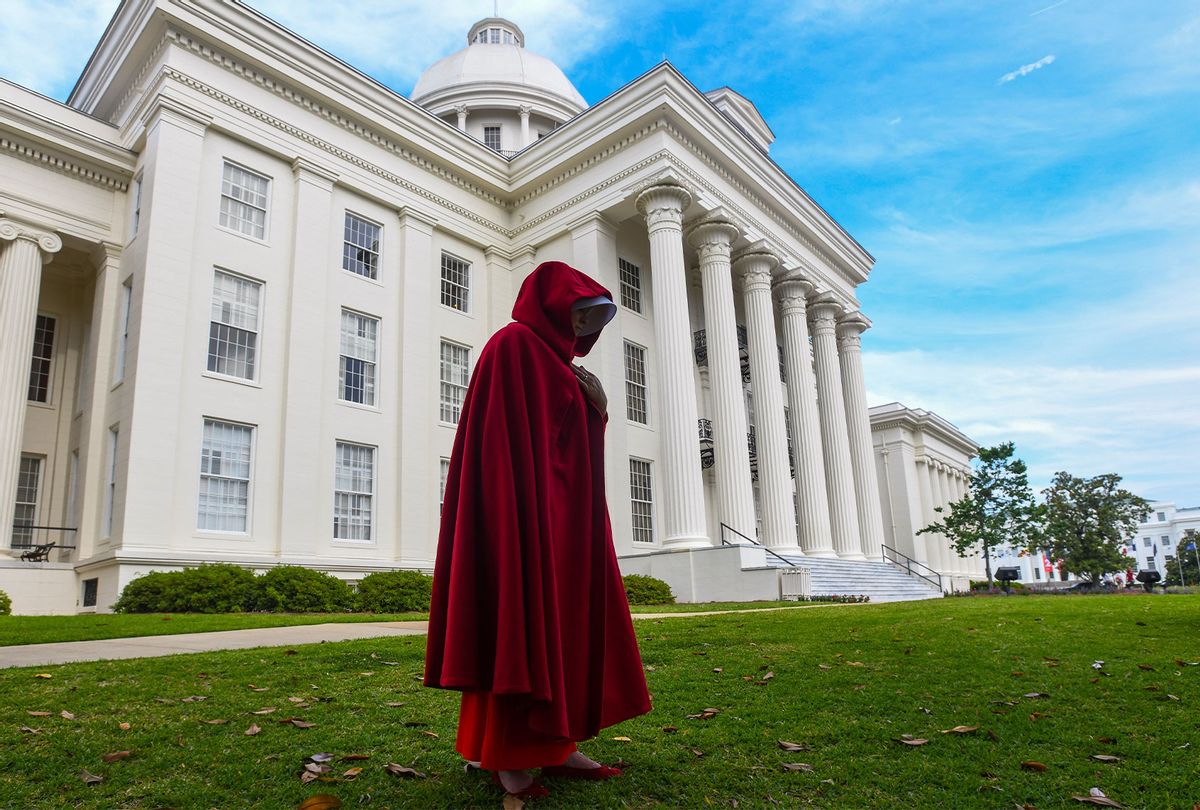 A protestor dressed as a character from the Hulu TV show "The Handmaid's Tale," based on the best-selling novel by Margaret Atwood, walks back to her car after participating in a rally against one of the nation's most restrictive bans on abortions on May 19, 2019 in Montgomery, Alabama. (Julie Bennett/Getty Images)
--

Are you terrified? If not, then you should be.

Last Wednesday, the U.S. Supreme Court allowed a Texas law to take effect that, in practical terms, overturns the landmark Roe v. Wade decision which gave women the right to make their own reproductive health choices.

The new Texas bill outlaws abortions as determined by "fetal heartbeat" pseudoscience, meaning at about six weeks, when many women don't even know for sure they are pregnant. There are no exceptions granted for girls or women who are victims of rape or incest. The Texas forced pregnancy law also creates a barbaric system under which $10,000 bounties may be paid to private citizens who win lawsuits against anyone who helps a woman or girl get an abortion after the six-week mark.

At its core, Roe v. Wade is a defense of the basic universal human right of bodily autonomy. Texas Republicans have rejected that right.

As others have observed, by the logic of the Texas forced pregnancy bill — and the Supreme Court's tacit endorsement of it — corporations now have more rights than women. In a new essay for the Guardian, constitutional law expert Laurence Tribe warns of the consequences:

It wasn't just Roe that died at midnight on 1 September with barely a whimper, let alone a bang. It was the principle that nobody's constitutional rights should be put on sale for purchase by anyone who can find an informant or helper to turn in whoever might be trying to exercise those rights.

That, after all, is how the new Texas law works. Its perverse structure, which delegates to private individuals anywhere a power the state of Texas is forbidden to exercise itself until Roe is overruled, punishes even the slightest form of assistance to desperate pregnant women. Doctors, family members, insurance companies, even Uber drivers, are all at risk if they help a woman in need. And the risk is magnified by the offer of a big fat financial reward for whoever successfully nabs a person guilty of facilitating an abortion once a heartbeat can be detected .... No law remotely like this has ever been allowed to go into effect.

The prospect of hefty bounties will breed a system of profit-seeking, Soviet-style informing on friends and neighbors.

On the same day that Texas overturned Roe v. Wade, another new set of laws went into effect that aim to subvert democracy by making it more difficult for Black and brown people to vote. Summoning a 21st-century version of Jim and Jane Crow, the new Texas anti-democracy laws encourage voter intimidation and harassment, make it easier for votes to be disqualified, restrict mail-in voting, and selectively target those means of voting used disproportionately by Black and brown people.

In total, these new laws are part of a nationwide attempt by the Jim Crow Republicans and larger neofascist movement to return the United States to a 19th-century version of itself — if not earlier — when white male domination over society was the norm. In that sense, it feels as if American society is broken, pulled through some type of time vortex and vomited out in a strange and horrible place where the worst aspects of the country's past are becoming its present and future.

Thus the question: What year is it really? Some time before Roe v. Wade? The end of Reconstruction and the beginning of Jim Crow and the Black Codes? Some alternate America in a parallel universe?

Borrowing from the first "Matrix" film, do we even know what year it is anymore?

This is not entirely accidental. Dread, disorientation and confusion are among the primary and most effective weapons used by neofascists and other authoritarians in their assault on reality and the truth. Such feelings make it far less likely that the victims will be able to effectively fight back.

Too many liberals, progressives and other pro-democracy forces are saddled with an additional disadvantage in the battle against the Republican Party and rising neofascism: They have convinced themselves that their humanistic values are shared by all Americans. This is a narcissistic conclusion, and deeply counterproductive. They have refused to accept the fact that one person's dystopia is another person's vision of paradise. Privilege in its various forms empowers such delusions.

In the real world, the Jim Crow Republicans, the Trumpists, Christian nationalists and other elements of the white right are celebrating the new laws in Texas that have overturned Roe v. Wade and further restricted the right to vote.

At the Guardian, Rebecca Solnit writes that the American right has been freed "from two kinds of inhibition since Donald Trump appeared to guide them into the promised land of their unleashed ids. One is the inhibition from lies, the other from violence":

This is the logical outcome of a party that, some decades back, looked at an increasingly non-white country and decided to try to suppress the votes of people of color rather than win them. Not just the Democratic party but democracy is their enemy. In this system in which some animals are more equal than others, some have the right to determine the truth more than others, and facts, science, history are likewise fetters to be shaken loose in pursuit of exactly your very own favorite version of reality, which you enforce through dominance, including outright violence.

Too many Americans, because of their investment in the country's national mythology of progress, inherent goodness and exceptionalism, are poorly equipped to comprehend neofascism and its use of pain to advance its agenda, still less to defend themselves against it.

Historian Timothy Snyder describes this dynamic as an example of "sadopopulism." In his book "The Road to Unfreedom" he writes that a voter who supports an authoritarian leader

is changing the currency of politics from achievement to suffering, from gain to pain, helping a leader of choice establish a regime of sadopopulism. Such a voter can believe that he or she has chosen who administers their pain, and can fantasize that this leader will hurt enemies still more. The politics of eternity converts pain to meaning, and then meaning back into more pain…. The electoral logic of sadopopulism is to limit the vote to those who benefit from inequality and to those who like pain, and take the vote away from those who expect government to endorse equality and reform.

Normal politics and its bedrock assumptions about the viability of the "system," the "rule of law" and "democratic institutions" offer little protection in an American society where a fascist movement now controls one of the country's two institutional political parties along with tens of millions of followers. The new American right also commands Fox News and a vast echo chamber that constitutes one of the most powerful disinformation and "disimagination" machines in human history.

The feelings of extreme fear, anxiety and dread that many (white) Americans are experiencing before the fascist tsunami are mostly new to them. As such, even after five years of Trumpism they still find themselves unable to respond appropriately to what is happening.

America's democracy crisis is fundamentally one of morality and culture. To defeat neofascism will require that the American people give up childish things and embrace a new maturity. Central to that new maturity will be accepting the fact that human deplorables are real -- and they are everywhere.

Your fellow Americans are not universally kind and just and decent. A good number of them want to hurt you — and will celebrate while doing so.

As the horror-movie cliché holds, the call is coming from inside the house.