Republicans are pushing America backward to the racist fantasies of the past. Are Democrats ready to fight? 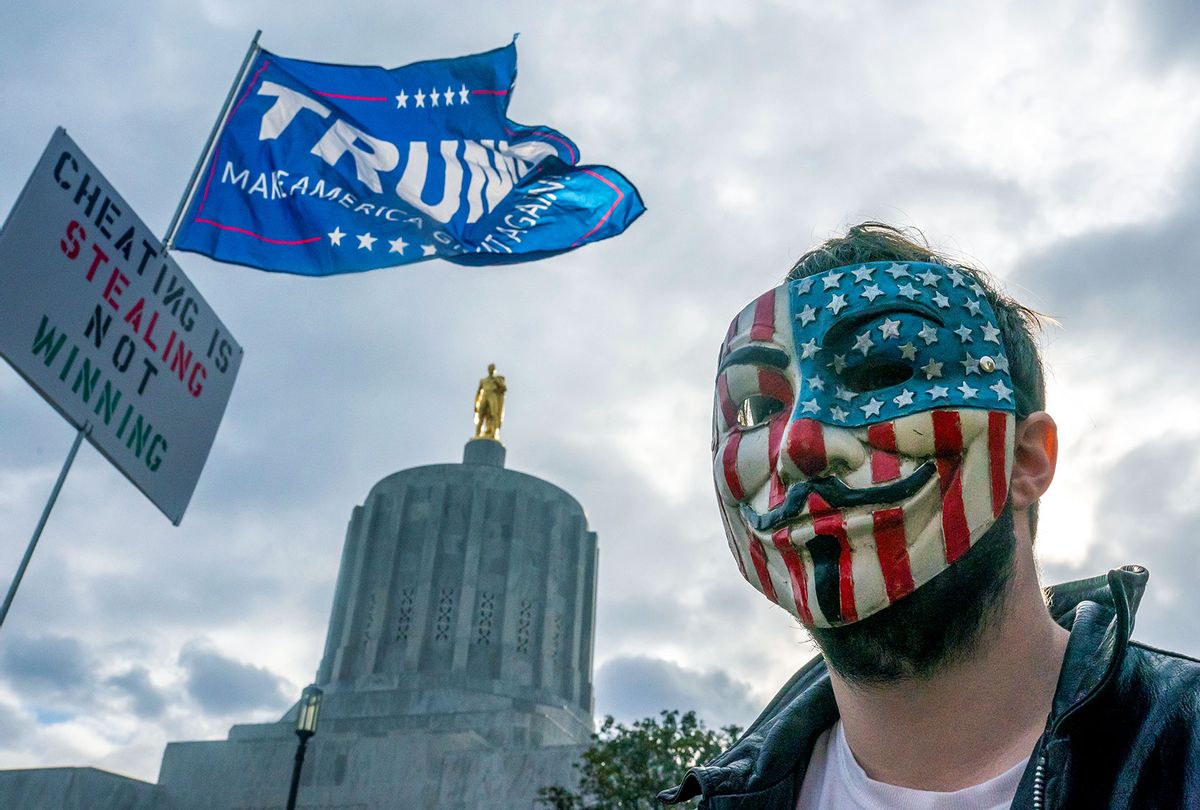 A protester in a Guy Fawkes mask stands in front of the Oregon State Capitol building during a Stop the Steal rally in Salem, Oregon. Angry supporters of President Trump took to the streets across the country following reporting that President-elect Joe Biden had won the election. (Nathan Howard/Getty Images)
--

"Birth of a Nation" is one of the most important films in cinematic history. D.W. Griffith's masterwork is considered by many film scholars and critics to be the first "modern" film: Its cinematography, narrative techniques, and technical innovations set the standard for what would come afterward.

There's a lesson here: A work of art can be extremely important, even groundbreaking, while also embodying — and seeking to legitimize — thoroughly reprehensible social and political values.

"Birth of a Nation" is one such example. The film is a white supremacist fantasy, and fable about the aftermath of the Civil War and Reconstruction. Instead of depicting the truth about how Black people created during Reconstruction "a nation under their feet" by fighting for their freedom, participating in democracy — as elected officials, voters, and organizers — creating civil society organizations and developing government programs that uplifted both Black people and poor whites, "Birth of a Nation" shows Black freedom, multiracial democracy and equality across the color line as something grotesque.

In Griffith's racist fable, Black people are childlike and ignorant, not suitable for self-government and democracy. Black men are animalistic rapists, obsessed with defiling "virtuous" white women, or violent drunks who are elected to government but then act irresponsibly. Infamously, Griffith depicts the Ku Klux Klan -- America's and the world's largest white terrorist organization -- as heroic and valorous. The power and influence of "Birth of a Nation" was so great that it contributed to a national climate in which thousands of Black people were lynched across the United States. It also helped resuscitate the KKK and turn it into a national organization.

In a letter to the president of the NAACP in 1921, scholar and activist W.E.B. Du Bois wrote that "Birth of a Nation" was created "to slander and vilify a race." He considered the movie to be "a public menace … not art, but vicious propaganda." The NAACP would lead protests against the film.

In historical reality, Reconstruction was one of the great experiments in American democracy — until it was sabotaged by white supremacists who worked tirelessly to take away Black people's freedom and impose a new form of slavery.

Woodrow Wilson, one of America's most overtly racist presidents, famously described "Birth of a Nation" as like "writing history with lightning." There was no true history in "Birth of a Nation," but Wilson was correct about the lightning: A hundred years later, "Birth of a Nation's" white fantasies and white lies still carry a type of electrical power and impact across space and time.

The Jim Crow Republicans of 2021 are once again trying to take away Black people's voting rights and civil rights in order to create a new American apartheid. They and their allies are using much the same logic and tactics — and in many cases the same language — as were used from the birth of Jim Crow in the 19th century through to its (temporary) defeat in the 1960s by the civil rights movement and Black Freedom Struggle.

These attacks on multiracial democracy include white supremacist terrorism, as seen during Donald Trump's coup attempt and the lethal attack on the U.S. Capitol.

In the war on Black and brown people's civil and human rights, "Birth of a Nation" now functions as a handbook, as well as a prologue, justification of and insight into the collective mind of the Jim Crow Republican Party and white right.

New polling from CBS/YouGov shows how racist and white supremacist attitudes about Black people's civic responsibility, citizenship, trustworthiness and right to vote are being used to justify Trump's "Big Lie" about the 2020 presidential election and the Republican Party's war on multiracial democracy. In the aggregate, these anti-Black attitudes and sentiments constitute what political scientists and others describe as "modern" or "symbolic racism".

CBS News begins its analysis by noting that most Americans "don't think there was widespread fraud in 2020," but most Republicans still say there was, and perceive "making voting easier" as giving Democrats an unfair advantage:

A closer look at why some still endorse the fraud claim and what specifically Republicans claim happened — despite the absence of actual evidence — shows a strong link to partisan politics. Republicans say fraud predominantly took place in cities and communities that vote Democratic, but much less so in the suburban and rural areas where many Republicans live. They also say it stemmed from mail ballots, which former President Trump long railed against, and which favored Democrats in many places. Meanwhile, most say ballots were counted properly in the states Mr. Trump won.

The CBS analysis continues by noting that those who perceive widespread election fraud "attribute more of it to Black communities" than to predominantly white areas.

Views on voter fraud also differ with regard to how ballots were cast, not just where they were cast. More than three in four of those who believe in widespread fraud attribute a lot of it to ballots cast by mail, a method used disproportionately by voters of color and criticized repeatedly by former President Trump. Among our validated voters in 2020, for instance, voters of color are over 10 points likelier than White voters to have cast their ballot by mail.

These white supremacist fears echo the paranoia felt by many white Americans in earlier centuries about the imaginary threat of "Negro domination."

The CBS/YouGov poll also fits within a much larger context of white racism, racial animus, racial resentment and racial authoritarianism, all of which drive support for the white supremacist agenda of the current Republican Party, and for Trump and his neofascist movement more specifically.

Social scientists and others have shown that hostility toward nonwhites is a key determinant of support for Trump. Republicans are also more likely to be racist and hold other anti-Black and anti-brown sentiments than are Democrats. Fueled by hostility to the civil rights movement and other societal changes that attempted to give equal rights to Black and brown people, the Republican Party has now fully embraced white supremacy and white identity politics as its dominant strategy for winning and keeping power.

On these connections between the past and present, Jamelle Bouie explained in his New York Times column that the infamous Jim Crow laws which disenfranchised Black people in the South never specifically said they were doing that:

I raise this because of a debate among politicians and partisans on whether Georgia's new election law — rushed through last month by the state's Republican legislature and signed by Gov. Brian Kemp, a Republican — is a throwback to the Jim Crow restrictions of the 20th century.

Democrats say yes. "This is Jim Crow in the 21st century. It must end," President Biden said in a statement. Republicans and conservative media personalities say no. "You know what voter suppression is?" Ben Shapiro said on his very popular podcast. "Voter suppression is when you don't get to vote."

The problem with the "no" argument here is that it mistakes both the nature and the operation of Jim Crow voting laws. There was no statute that said, "Black people cannot vote." Instead, Southern lawmakers spun a web of restrictions and regulations meant to catch most Blacks (as well as many whites) and keep them out of the electorate.

One of the lessons of the South after Reconstruction is that democratic life can flourish and then erode, expand and then contract. Democracy is not a solid state, and we should be wary of politicians who would undermine any part of it for partisan advantage.

It took three decades of struggle, and violence, before Southern elites could reclaim dominance over Southern politics. No particular restriction was decisive. The process was halting, contingent and contested, consolidating in different places at different times. It was only when the final pieces fell into place that the full picture of what took place was clear.

Put a little differently, the thing about Jim Crow is that it wasn't "Jim Crow" until, one day, it was.

Today's Republican Party, with its "Birth of a Nation" fantasies, represent a collective effort to whitewash Black America's history of resistance to white supremacy and American neofascism. In the Age of Trump and beyond, the worst parts of America's past have been reimagined as something ideal and aspirational.

In his 1905 book "The Aftermath of Slavery," William Sinclair wrote:

Here is the kernel of a great truth. The white people of the South have voted persistently and solidly against every measure of great national benefit for forty years. The colored people have voted as persistently and as solidly, wherever permitted to do so, in favor of such measures; so that while the white vote of the South has been inimical to the great interests of the country, these have been saved by the colored vote.

Thus the colored vote has proved a veritable godsend to the nation. Without this vote the most important and fruitful national policies would have been impossible of inauguration. The negro vote is a failure only when it is suppressed by the intimidation, fraud, and shot-guns of the whites.

As the Jim Crow Republicans and the white right continue their assault on American democracy, Sinclair's words offer both caution and inspiration.

In a recent interview with Salon, historian Annette Gordon-Reed explained:

African Americans have from the very beginning been the people who tried to make the promise of America real. They believed in the words of the Declaration of Independence. African Americans have tried to uphold those words, in the face of other people who did not seem to take those words and the values as seriously as they did. African Americans have long tried to uphold the values of the Declaration and the notion of equality in the 13th, 14th and 15th amendments, which brought Black people into citizenship and represent the idea that people should be treated as equal citizens. Yet there are people right now here in the United States who do not take those parts of the Constitution seriously. They are imagined as "true" Americans, and are given the benefit of the doubt when, for example, they attack the Capitol building.

If the American people as a group had listened to Black folks' warnings — and in particular Black women's warnings — about the danger represented by Donald Trump, he would never have been elected president in the first place. If the mainstream news media and other prominent public voices had listened to Black and brown folks' warnings about ascendant fascism and white supremacy, the Jan. 6 coup attempt and lethal attack on the Capitol would not have taken place.

Black and brown folks are now trying to warn the Democrats and Joe Biden that American democracy has been imperiled to such an extreme that the 2022 midterms may be the last "free and fair elections" in the United States — and even that is an optimistic prediction.

Black people are demanding the "urgency of now" to save the country's democracy. Joe Biden and the Democratic Party's leadership have instead chosen to celebrate "infrastructure" and "bipartisanship" while refusing to end the filibuster.

If America had listened to Black people's wisdom and warnings across the centuries, it would be a safer, more secure, more prosperous and more free nation today. America's future depends on heeding that wisdom now. There is no time to lose.