Republican attacks on democracy are a national emergency. Will Democrats ever fight back?

Democracy's enemies have only gotten bolder since January — and they're winning. Who will stand against them? 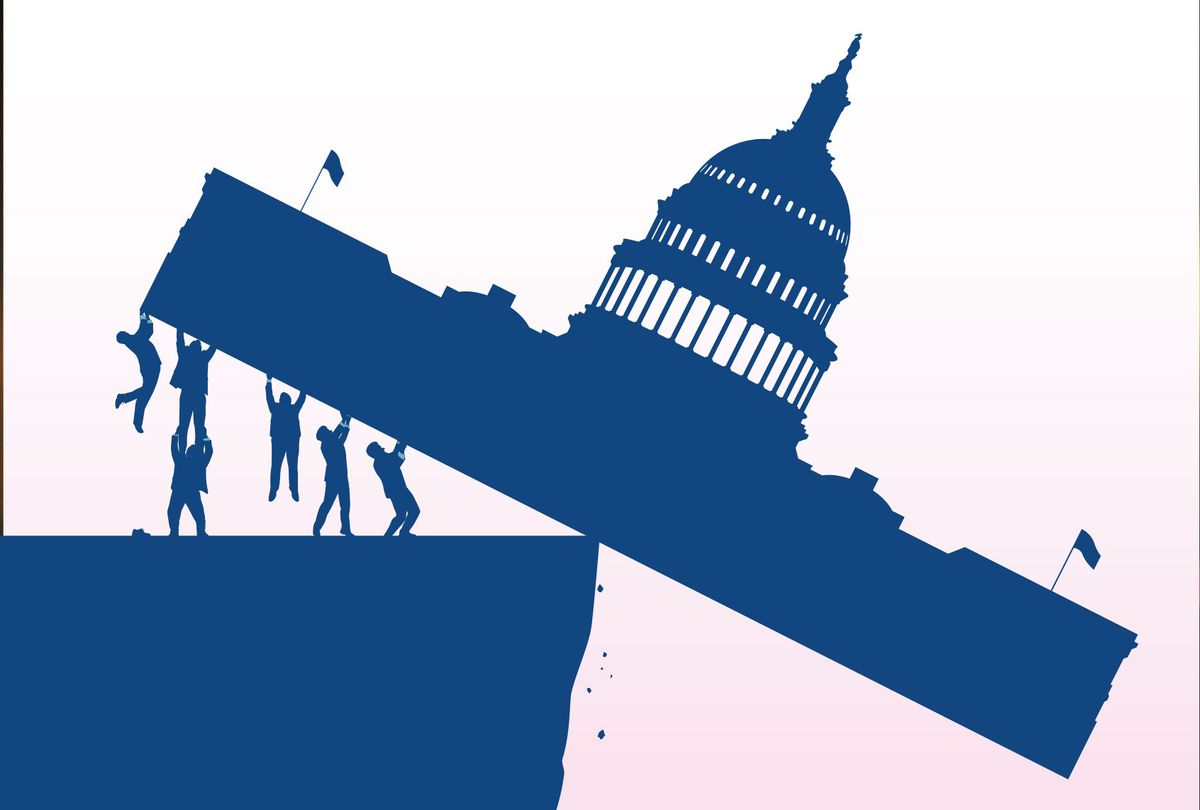 The Republican Party is attacking American democracy in plain sight. The party of Trump is doing this without fear, with little need for guile or subterfuge and with unabashed, bold confidence.

In essence, the Republican Party and its followers and allies have declared that no American election is considered valid unless a Republican candidate wins. This is obviously the stuff of fascist, white supremacist and anti-democratic regimes where the endpoint is a form of "managed democracy" similar to Vladimir Putin's Russia or Viktor Orbán's Hungary, where elections still occur but one party rules indefinitely.

Michael Flynn, the retired general who was briefly Donald Trump's national security adviser, even appeared to endorse a military coup during an appearance at an event Sunday in Dallas "that was attended by prominent peddlers of the QAnon conspiracy theory and the Big Lie," as CNN reports. A member of the audience reportedly asked Flynn why an event similar to the recent military coup in Myanmar — which has been celebrated by many in the global far right — couldn't happen in the United States. "No reason, I mean, it should happen here," Flynn said.

Sidney Powell, an attorney associated with Trump's efforts to steal the 2020 election, also appeared at the Dallas event and reportedly said Trump should be "reinstated" as president, suggesting that a "new inauguration day is set."

Republicans behave as if they possess secret knowledge that predicts or preordains their future victories. Perhaps they know something that the Democrats, the news media and the American people do not?

In comparison, Democrats behave like a sports team that's badly losing a game. In effect, they protest to the referee that the opponent is cheating and flouting the rules. Republicans respond by laughing in their faces, having concluded long ago that winning is all that matters.

For the most part, the American media has no idea how to cover such a game. Its major commentators and institutions keep referring back to the old rulebook, which the Republicans have now made obsolete.

In his newsletter Press Run, Eric Boehlert explains the media's failure — or willful inability — to grapple with the Republican Party's self-seduction into fascism:

Unfortunately, the Beltway press has no idea how to cover this story. It still refuses to use the proper tools and language to put the troubling actions of the GOP in context via its straight news coverage. Hiding behind Both Sides journalism, timid language, and purposeful naïveté, news outlets still aren't being honest about the dire threat Trump Republicans now pose to the country. …

The GOP and its followers have become consumed in deliberate lies, yet the press still views the party as a serious entity whose views deserve to be treated respectfully.

"It's time the media stop covering the GOP as a political party — it's not," tweeted SiriusXM radio show host [and Salon contributor] Dean Obeidallah. "Today's Republican party is a white nationalist, fascist movement and those exact words need to be used by the media so everyone gets the threat the GOP poses to our nation."

The Republican plan to overthrow multiracial democracy must be understood as a multi-spectrum attack. Across the country on the state, local and federal levels, Republicans are using such tactics as gerrymandering, imposing onerous ID requirements, restricting mail-in and absentee voting, closing polling places in Black and brown communities, removing drop boxes, conducting phony audits to manufacture evidence of fraud, and placing party loyalists and operatives in key positions to guarantee that their preferred candidates will always "win."

In a video leaked to Mother Jones, the executive director of Heritage Action for America — a lobby group affiliated with the right-wing Heritage Foundation — was recorded at a private fundraising event in April bragging that her organization was writing Republican voter suppression laws across the country, and observing how easy it is to subvert democracy.

Common Cause Texas recently discovered an online briefing in which a Republican official outlined a Jim Crow-like plan to deploy poll watchers tasked with intimidating Black and brown voters in the Houston area, the state's largest and most diverse population center — and home to a high concentration of likely Democratic voters.

Republican elected officials and other spokespeople have publicly declared that their efforts to "protect the integrity of the vote" from "fraud" are really designed to reduce the number of votes, especially from Black and brown people and other groups who support the Democratic Party.

Even Rep. Liz Cheney, the "respectable" Republican "patriot" and supposed hero of democracy who has been celebrated by the chattering class and mainstream news media, has supported her party's efforts to replace multiracial democracy with a new Jim Crow regime.

Even if a Democratic candidate for president (or other high office) manages to survive this new gauntlet of anti-democratic "reforms," Republicans have now established a precedent with Donald Trump and the 2020 election under which they will feel free to invalidate Electoral College votes and use their power in gerrymandered state legislatures to decide the real "winner."

Furthermore, if a Democratic candidate somehow manages to survive that concerted campaign by Republicans to override the people's, then right-wing terrorists and other paramilitaries may also be used to nullify the election. Donald Trump's coup attempt and the attack on the U.S. Capitol by his supporters offered us a preview of that future.

Fox News and other elements of the right-wing media are playing a central role in propagandizing their public to believe in the Big Lie about the 2020 election and to prepare them for whatever means may be necessary — up to and including lethal violence — to prevent Democratic Party and its voters from obtaining or holding political power.

Why are Republicans and their supporters so bold and unafraid in their attacks on American democracy?

Essentially, they view President Biden and the current exceedingly narrow Democratic majorities in Congress as a type of speed bump on their road to inevitable victory. That is not unreasonable, since to this point Trump-supporting Republicans have faced no serious consequences for their systematic attacks on American democracy and the rule of law. Many Republicans and Trumpists sincerely believe themselves to be "patriots" who are on the correct side of history, and therefore believe that anything they and their allies do to win and keep power is justified. (Others, no doubt, view this struggle in far more cynical terms.)

Today's Republican Party and larger right-wing movement has become a type of religion. Its followers are united by faith and committed to their "truth," which exists outside of human reason and empirical reality.

Moreover, many of Trump's followers — especially among right-wing evangelicals and Christian nationalists — literally consider Donald Trump to be a type of savior or messiah, perhaps prophesied in scripture.

The American far right has yearned, hoped and schemed to overthrow democracy for decades. Trumpism is a symptom of a deep crisis in American society — especially in white America — about the inherent legitimacy of multiracial democracy. It is not the cause.

Ultimately, the bulk of the Republican Party and the broader right-wing movement have concluded that Democrats are weak, naïve, shortsighted, divided and unwilling to do what is necessary to stop them. To this point, that conclusion appears correct.

In June of 2020 I interviewed Bosnian-born novelist Aleksandar Hemon for Salon. Watching the tumult in America over the past year, culminating in Trump's coup attempt and the Republican Party's embrace of neofascism and authoritarianism, I have thought a great deal about what Hemon said about how a society breaks apart, drawing on what happened in Yugoslavia during its civil war:

With Trumpism the news media has to change the entire way in which they interpret and engage with reality. The American news media, for the most part, cannot do it. They cannot make that pivot. The rules are different with an authoritarian such as Donald Trump.

At the same time, the advantage of Trump and his movement is that they do not care about reality or the truth. They are a death cult. They are not afraid to die. The Trumpists and Republicans are excited and motivated by the possibility of remaking reality itself, because they are in revolutionary mode. The Democrats and everyone else are, by comparison, trying to find a magical way to retain the status quo. Which, even if the status quo was somehow good enough, is now impossible to salvage. The American right's, and the global right's, revolutionary process is far too advanced at this point.

The Republican Party's attacks on democracy are a national emergency. Will the Democrats stand up and fight, doing everything possible to defend American democracy? Or will they simply roll over for the forces of authoritarianism, protesting the whole time about rules and norms and the tremendous unfairness of the process?

No one really knows the answer, least of all the Democrats themselves. They and we — and all people around the world who still look to America as a symbol of democratic possibility — are running out of time.