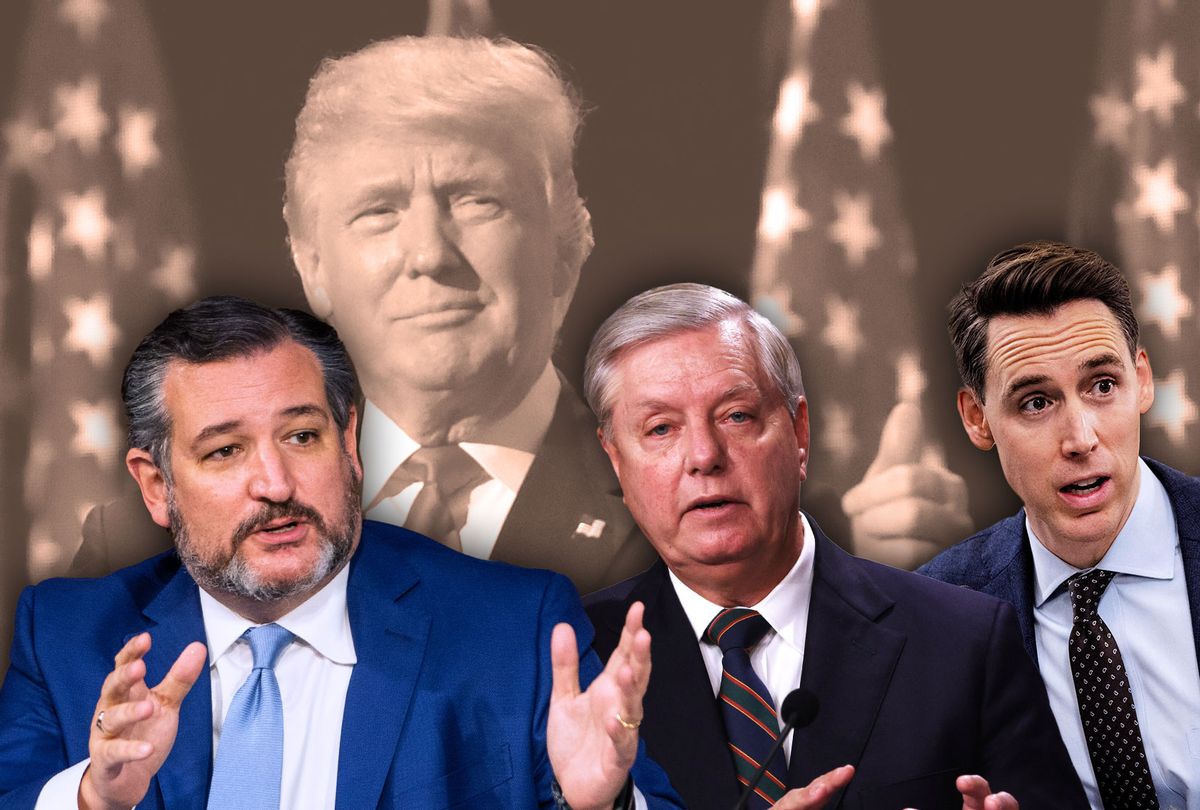 On Saturday, Senate Republicans acquitted Donald Trump for the crime of insurrection and a lethal attack on the Capitol, which was part of a his larger coup attempt. All 50 Democrats voted to convict Donald Trump. They were joined by seven Republicans.

The evidence presented by the House impeachment managers against Trump was overwhelming. It is true that his defense attorneys were incompetent — although in fairness the best legal minds in the world would have had a difficult time finding a way to exonerate Trump for his obvious crimes. But the outcome was preordained: Republicans in both the House and Senate repeatedly and publicly signaled weeks ago that they were going to acquit Donald Trump no matter what the evidence against him.

In refusing to convict Donald Trump for his crimes against democracy, the Republican Party has announced that Republican presidents are above the law and can act with impunity, as kings or dictators do — and that this is now true for Republican officials on the federal, local and state level as well.

In total, the Republican Party has created a precedent that right-wing political violence and terrorism, including coups and other attempts to overthrow legal elections, are now acceptable in the United States — as long as they are perpetrated by Republicans and their allies against Democrats and others deemed to be "un-American."

This is the essence of fascism and authoritarianism. Such beliefs and values have broad support among Republican voters and other members of the right wing more generally.

Recent public opinion polling and other research shows that Trump Republicans believe that political violence is a reasonable tool for them to advance their goals. This all but guarantees that Trump's coup plot and attack on the Capitol are a blueprint to be followed by members of the white right across the country.

The exact share of the GOP coalition responsive to extremist White nationalist beliefs or the use of violence to advance political goals is impossible to measure precisely. But polling and other research suggests that the best way to think about it may be through concentric circles radiating out from hard-core believers willing to commit violence themselves to a much broader range of GOP voters who might not become violent personally but express sympathy or understanding for those who do.

The inner circle are the extremists actively participating in potentially violent White nationalist extremism. Neumann recently told me that number might total about 75,000 to 100,000 people.

Contrary to what many of the hope-peddlers and professional centrists in the news media and elsewhere would like to believe, Trumpism and other forms of American fascism were not exiled by Joe Biden's election victory.

The Age of Trump is not over. Donald Trump will attempt to be a type of shadow president and kingmaker who controls the Republican Party and its public. The Age of Trump will also linger on through what counterterrorism experts warn may be years if not decades of violent right-wing insurgency and terror directed against liberals and progressives, nonwhite people, Muslims, Jews and other groups targeted as the enemy Other. The question is not whether there will be blood, but rather how much more blood will be spilt by Trump's followers and other right-wing extremists and paramilitaries.

In the same essay at CNN, Republican consultant Michael Madrid describes this woeful reality: "They have fed the monster for so long that even when it turns on them, when the barbarians are literally at the gate ... when they were the targets and they were prey, they still will not turn on it. That's how dangerous is the societal threat that we are facing."

The Republican Party's embrace of Trumpism and now full-on endorsement of right-wing violence and terrorism should not be a surprise. Trump's 2016 presidential victory and fake right-wing "populist" movement was fueled by white supremacy, nativism, and other forms of bigotry and hate. That is violence.

White Christian nationalists and right-wing evangelicals are among the most loyal and fanatical members of the American right and the Trump movement. As a group, these Christian fascists are committed to overturning secular democracy and making real their "end times" eschatological and apocalyptic fantasies. That is violence.

The Republican Party and the broader right have embraced gangster capitalism and its ethos that profits are more important than people. Their ideology is Dickensian and social Darwinist: the poor and other marginalized groups are surplus people who should be left to die if they cannot be "self-sufficient" and "productive." That is violence.

Public health experts have repeatedly shown that Republican policies across a range of issues are a danger to the American people, and have literally killed them in higher numbers, as compared to the policies endorsed by the Democrats. This too is violence.

Donald Trump, other Republican and right-wing leaders, and their propaganda disinformation media routinely use stochastic terrorism to encourage violence by their public and followers against Democrats, liberals, progressives and other targeted groups.

Unlike in 2016, no one in America can pretend they were blindsided or surprised or somehow could not anticipate how the Republican Party would finally and fully embrace right-wing terrorism and fascism. The American people have had four years of real-world experience and education from the cruel tutelage provided by Donald Trump and his movement.

As I wrote on Twitter Saturday night, "When this gets very bad — and it will in ways most Americans and the hope peddlers in the news media are still in denial about — 'I didn't know' or 'I had no idea' will not save them. They have been warned for at least five years if not longer. They think you can hide from monsters."

If the American people do not embrace a new maturity about the enduring power of fascism and authoritarianism in America, Biden's presidency will prove to be no more than an interlude or brief respite in the Age of Trump, after which the trauma of Donald Trump's time in office will be viewed as the good old days, when compared to what comes later.

In 1787, Benjamin Franklin, upon leaving the Constitutional Convention, reportedly told a woman on the street who asked about the kind of government chosen for the new country, "A republic, madam, if you can keep it." More than 200 years later, the American people are being tested again. Will they be up to the task?

Too many Americans have convinced themselves that the Age of Trump is now over and his fascist movement vanquished — even though Biden has not been president for a month — and want to throw the last five years down the memory hole without doing the hard work of national reckoning, confrontation, justice and then, perhaps, eventual healing. To this point, my answer is no.