Amnesia nation: To "forget" the Trump era is a toxic act of privilege — and very dangerous 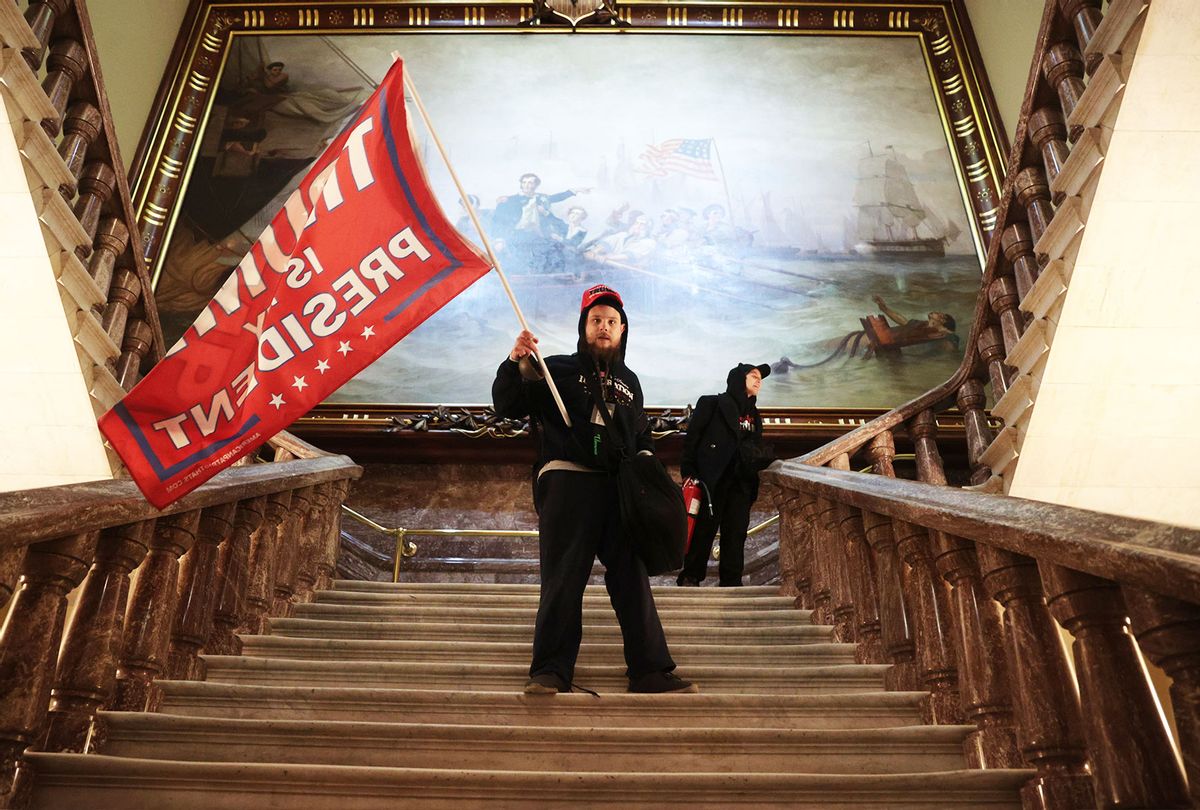 A protester holds a Trump flag inside the US Capitol Building near the Senate Chamber on January 06, 2021 in Washington, DC. Congress held a joint session today to ratify President-elect Joe Biden's 306-232 Electoral College win over President Donald Trump. A group of Republican senators said they would reject the Electoral College votes of several states unless Congress appointed a commission to audit the election results. (Win McNamee/Getty Images)
--

Gore Vidal once warned that Americans do not remember anything that happened before Monday morning. America is an amnesiac country that pretends it has no history.

Vidal, in many ways, was prophetic. Joe Biden has only been president for a week. Donald Trump's presidency was not 40 years ago, or 400. There has been nothing close to a proper reckoning for Trumpism and American fascism and all the harm it has caused, and is still causing). Ultimately, in too many ways the swamp of Trumpism is still overflowing and threatening to flood the entire country.

The news media and many opinion leaders want to move on from the Age of Trump because they crave a return to "business as usual". Those elites also want to put the Age of Trump behind them as a way of avoiding responsibility for all the ways they enabled and empowered Trump and his movement by downplaying or denying the danger that he and his movement represent to American democracy and the nation.

And of course, Republicans now want to have "unity" and to "move forward" and avoid "division" — because whatever the private misgivings of some political figures may be, the Age of Trump was a great victory for their policy agenda. "Moving forward" will also do the work of helping the Republicans avoid any public backlash or other consequences for being co-conspirators in Trump's fascist plot to overthrow democracy. Throwing Donald Trump down the memory hole is a way of continuing Trump and the conservative movement's political crime spree without sharing any of the responsibility or stigma. On Twitter, grassroots activist and artist Bree Newsome described the Republican strategy to great effect:

Sorry we tried to assassinate you & overthrow the election. We didn't expect it to fail & create this awkwardness between us. Let's move forward & get back to normal with us blocking any legislation you introduce while we continue to feed a racist terrorist movement.

What so many survivors of this first iteration of Trumpism really want is for the last four or five years in America to be deleted and declared never to have happened. Unfortunately, such a thing is not possible.

On this, Charles Yu writes in a new essay at Harper's:

The idea that we have been living in an alternate timeline — that the world in which Donald Trump never became president exists alongside the horrible funhouse world we've been forced to occupy for four years — has been a common social-media trope. This is partly an incredulous response to the sheer strangeness of our situation, but implicit in the joke is the idea that we might somehow find our way back to that other place. …

Yu observes that there's no "easy way to usher Trump offstage," as Philip Roth did with American fascist Charles Lindbergh in the alternate-history novel "The Plot Against America," but that even if there were, "that would not return us to the 'normal' world."

That world does not exist. We will never again live in a country where Trump was not president, and because of that, a perpetual fear may simply be part of our lot from now on. But there is also some hope to be found in the fact that we can't return to the timeline Trump disrupted. The reason no such timeline exists is that the future is not determined — not by Trump or by anyone else. The question we face now is how to live after Trump, and the question is our own to answer.

Yu concludes by observing that "a signature feature of Trump's presidency" was his remarkable ability "to colonize every square inch of our lives, including many areas seemingly removed from politics." Changing that is not something Joe Biden can accomplish: All of us "will need to find a way to replace Trump, to figure out what happens next."

Perversely enough, the end of Trump's presidency has left an absence of sorts. Some people, because of the color of their skin, money and other material resources, or just as a function of sheer luck and life circumstances, have the privilege of ignoring and forgetting what has recently happened (and is still happening) in America.

There are other people who enjoy no such privileges. They have lost their jobs or have slipped into economic ruin because of Trump's plague and his willful negligence in responding to it. Their families have been torn apart by Trump's regime and his de facto declaration of war on nonwhite migrants, refugees and undocumented immigrants. Many have lost parents, partners, children, relatives, neighbors and friends to Trump's plague. Perhaps they and their community, like so many other Americans, are experiencing post-traumatic stress disorder and other emotional and physical maladies. The Age of Trump has caused a large increase in violent hate crimes against nonwhite people, Muslims, Jews and other marginalized groups.

When Trump's fascist mob attacked the Capitol on Jan. 6 in an obvious attempt to overthrow Biden's victory and subvert multiracial democracy, it was again shown how Black and brown people do not have the privilege of forgetting the Age of Trump and all that it has wrought.

The Black Freedom Struggle has endured for centuries. To forget or "move on" from the Age of Trump without true justice and a proper reckoning is to further empower white supremacy.

Then there are the people who have been touched by Trumpism and its harm and perfidy, but who now choose to deny that ever happened. Such people have embraced delusions and denial and confused it with self-care.

At the Guardian, David Rieff reflects on the balancing act between collective memory and forgetting:

What if collective historical memory, as it is actually employed by communities and nations, has led far too often to war rather than peace, to rancor and resentment rather than reconciliation, and the determination to exact revenge for injuries both real and imagined, rather than to commit to the hard work of forgiveness?

This is what happened in the American south after 1865, where after the guns of the civil war fell silent, another form of battle raged over whose version of the conflict — the victorious Union or the defeated Confederacy — would prevail. As the recent debate in the U.S. over the Confederate flag demonstrated, that battle over memory, though diminished, still goes on today. …

These are the cases in which it is possible that whereas forgetting does an injustice to the past, remembering does an injustice to the present. On such occasions, when collective memory condemns communities to feel the pain of their historical wounds and the bitterness of their historical grievances it is not the duty to remember but a duty to forget that should be honored.

But Trump and his movement are not "historical," in the sense of "being gone." They are still alive, still with us. Joe Biden has been president of the United States for barely a week and Trump is already working the gears of his own shadow presidency and seeking to activate the tens of millions of people who are members of his political cult. Trump controls the Republican Party. He even has his own cult religion in the form of the QAnon conspiracy theory, which has been damaged by Biden's victory but clearly not destroyed.

To put oneself outside or above this present moment is to exercise the privilege of being separate and apart from history and its pushes and its pulls, successes and failures, joy and pain, lived consequences and experiences. Such a state of being is literally "ahistorical" — and quite likely an expression of malignant narcissism. The privilege of such grand, hubristic forgetting all but guarantees that American fascism will continue to grow in power and influence — and that Trump himself or some newer, more efficient model will emerge to finish the original's vile work.

If and when that occurs, no one will have the privilege of denial and forgetting. When American democracy is overthrown entirely, there will be no hiding place.