Republicans have a plan: Create an authoritarian state where voting is strictly controlled. It might work 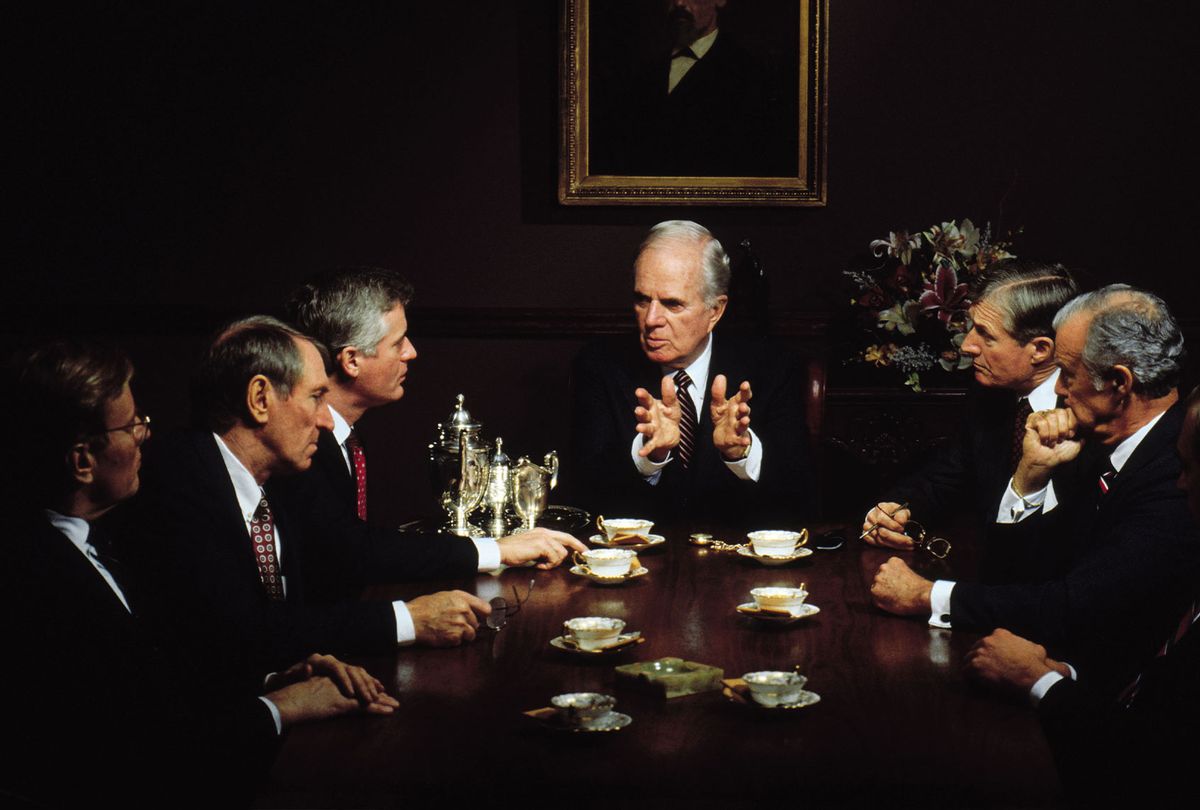 The Republican Party and the white right are escalating their war on voting and democracy.

As the Brennan Center for Justice summarizes, Republican state legislators across the country "have introduced 361 bills with restrictive provisions [on voting] in 47 states," a 43% increase from the 253 "restrictive bills" in process in mid-February:

These measures have begun to be enacted. Five restrictive bills have already been signed into law. In addition, at least 55 restrictive bills in 24 states are moving through legislatures: 29 have passed at least one chamber, while another 26 have had some sort of committee action (e.g., a hearing, an amendment, or a committee vote).

The Jim Crow Republican Party's attempt to keep Black people in Georgia from voting is a preview of a national plan to turn the United States into a type of authoritarian state. On paper, "Republicanistan" will be a democracy — but one where one party has rigged the elections so it almost always wins, and the "opposition" must meet almost impossible standards to even be on the ballot. Even then, as seen in the aftermath of the 2020 presidential election, with Donald Trump's coup attempt and the attack on the U.S. Capitol, the Jim Crow Republicans will look for ways to change the rules or nullify the outcome.

In public statements, leading Republicans have basically admitted that their efforts to nullify multiracial democracy are not driven by concerns about "voter fraud" or "voter security" but rather by the desire for power and control.

This has fueled an inevitable counter-narrative from the right wing and its enablers, in which the American people are being told, to borrow from Trump's command, not to believe their lying eyes.

The mainstream media largely insists on covering the Republican war on democracy as a partisan battle rather than as an attack on democracy itself by one of the country's two institutional political parties.

There are claims by some stenographers of current events — those who inhabit the "church of the savvy" and take the "view from nowhere" — that the Jim Crow Republican Party's attempts to stop Black and brown people from voting may be unseemly, but to claim that they are "racist" or "white supremacist" in nature is hysterical and exaggerated.

Such claims are just working in defense of the Jim Crow Republicans. Their anti-democracy attacks are precision-targeted against Black and brown communities. Moreover, these attacks are legitimated by racist insinuations that Black voters are "irresponsible" or that their votes are "low quality" because of alleged fraud or vote theft in "urban areas." These lies echo earlier falsehoods that the white right used during the Jim Crow reign of terror to keep Black Americans from voting.

Other defenses of the Jim Crow Republican attacks on Black and brown voters include such arguments that the recently-enacted Georgia law does not explicitly mention race or party affiliation and thus cannot be "racist." In fact, Jim Crow laws of the 19th and 20th centuries rarely, if ever, made explicit references to prohibiting Black people from voting. Contrary to popular belief, there were no flashing neon signs proclaiming that Black people could not vote. Instead, Jim Crow was enforced through apparently race-neutral laws that in practice were explicitly designed to keep Black people from voting: poll taxes, literacy tests, property tests, the "grandfather clause" and all-white primaries in which the Southern Democrats — who held an effective monopoly over the region's politics at the time — could determine who was allowed to vote. (Poor white people were impacted by some of these laws as well. They were collateral damage in upholding white supremacy.)

In total, Jim Crow was a society-wide system and culture in which violence and other threats of punishment made it clear that Black people were not allowed to participate as equal members of the polity.

Some on the right and elsewhere have tried to defend the Jim Crow Republican Party's attacks on Black and brown people's voting rights in Georgia by admitting that these laws may have a disparate impact on communities of color but do not have racist "intent."

First, that is objectively untrue. Second, such claims are cousin to the familiar deflections and excuse-making tropes such as: "He or she doesn't have a racist bone in their body." Unfortunately, no such X-ray machine, MRI scanner or other technology exists to make such a determination. What is left then for the diagnosis? We can only look at actions and outcomes. By those criteria, the Jim Crow Republican Party and the broader white right's attacks on multiracial democracy are racist and white supremacist.

Here is the most naked and dishonest attempt at deflection by the Jim Crow Republicans and their propaganda machine. They claim that the Georgia "voting security" bill does not in fact forbid giving food and water to people who are in line waiting to vote. The bill explicitly states that very thing. This is a reminder that Joseph Goebbels' "Big Lie" is sustained in practice by many little and medium-sized lies.

Black conservatives are playing their assigned role — one that can be highly lucrative — as human defense shields for white racism. They are cheerleaders for the Jim Crow Republican Party, and their task now is to argue that to protest, resist or fight back against the Georgia's anti-democracy laws and others across the country is somehow infantilizing to Black Americans. There is no reasonable way to parse the internal logic — or lack thereof — in these self-tormented claims.

All that is necessary to decipher the behavior of today's Black conservatives is to understand that these are the same people who argue that the vast majority of Black people who choose to vote for the Democratic Party are stuck on some kind of "plantation" and are incapable of "thinking for themselves" — because they choose not to support a political party that is nearly all-white and has slid into neofascism, racism and overt white supremacy.

All the smog and poisonous distractions being emitted by the Jim Crow Republicans and their allies to hide and obfuscate their hostile intent towards multiracial democracy are pierced by a single image. When Georgia Gov. Brian Kemp signed the new Republican anti-democracy law into effect on March 25, he did so under a painting of a Southern "plantation," better described as a slave labor prison camp where Black human property was tortured and worked to death.

On the power of such imagery, commentator Will Bunch writes with great clarity:

The fitting symbolism is somehow both shocking and unsurprising. In using the antebellum image of the notorious Callaway Plantation — in a region where enslaved Black people seeking freedom were hunted with hounds — in Wilkes County, Ga., as the backdrop for signing a bill that would make it a crime to hand water to a thirsty voter waiting on Georgia's sometimes hours-long voter lines, the GOP governor was sending a clear message about race and human rights in the American South.

The portrait of the plantation was the starkest reminder of Georgia's history of white racism that spans slavery, Jim Crow segregation, the rebirth of the modern Ku Klux Klan, and today's voter purges targeting Black and brown voters — but it wasn't the only one. At the very moment that Kemp was signing the law with his all-white posse, a Black female Georgia lawmaker — Rep. Park Cannon — who'd knocked on the governor's door in the hopes of watching the bill signing was instead dragged away and arrested by state troopers, in a scene that probably had the Deep South's racist sheriffs of yesteryear like Bull Connor or Jim Clark smiling in whatever fiery hellhole they now inhabit. ...

In 2021, it's tempting to call Kemp signing the bill in front of the plantation painting "ironic," when in fact it's all too fitting. Understanding the symbolism here helps us to understand what's really important, that the voting law is the latest cruel iron link in an unbroken chain of white supremacy that extends all the way back to 1619, when the first slave ship arrived in North American soil.

While the Jim Crow era may feel like centuries ago to many younger Americans, that regime was only defeated some 60 years ago. Many of the resisters, survivors, enforcers, enablers and beneficiaries of that criminal regime are alive now. Those who were and are part of the activist and protest tradition of the Black Freedom Struggle are warning the public about the peril embodied by the Republican Party and white right's attack on multiracial democracy in Georgia and across the country. These defenders of democracy know evil when they see it. Their warnings are not hysteria or hyperbole.

Ultimately, America is in a war against itself for the soul of its democracy and future. Republicanistan is much closer to becoming reality than many Americans would like to believe. We cannot allow the allure of organized forgetting or President Biden's early successes to distract us from vigilance in defense of American democracy.