NAACP chief on the lawsuit against Trump: "We have to cut the head off white supremacy" 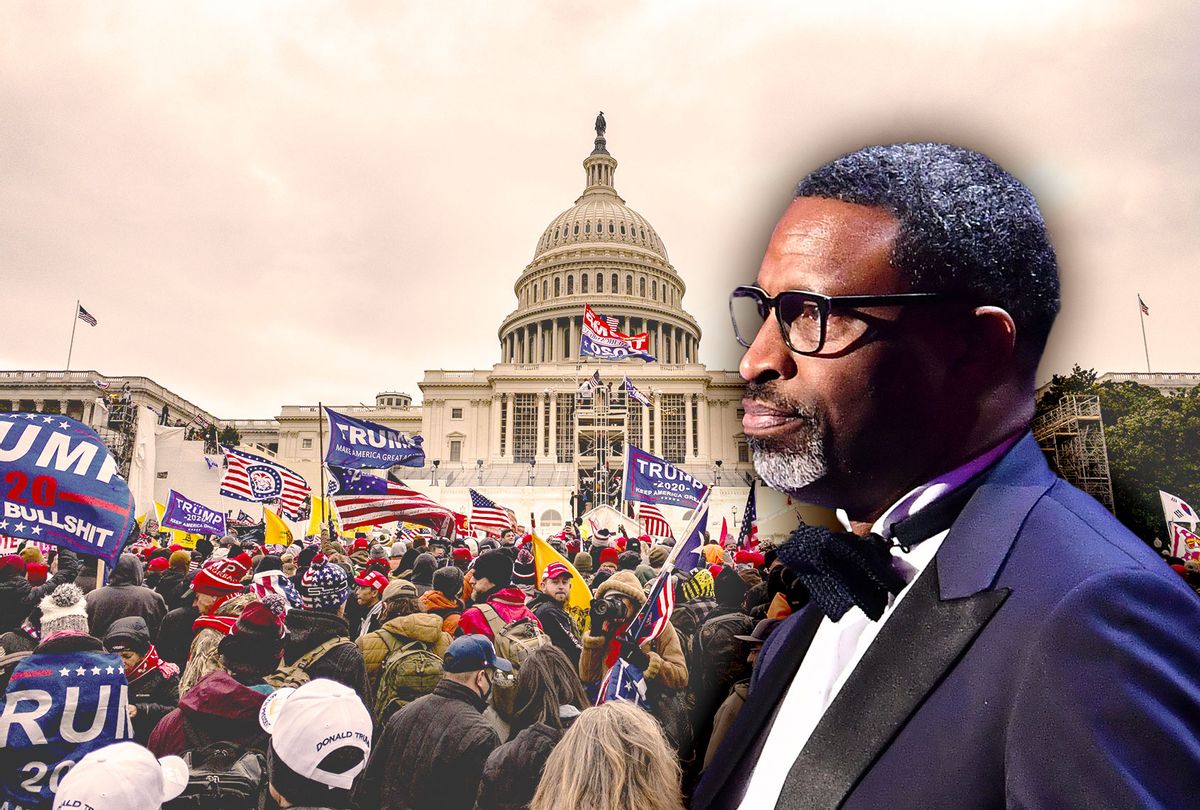 Two months have passed since Donald Trump's attempted coup and the lethal attack on the U.S. Capitol.

In that time, the American people and the world have learned a great deal about the events of that day and what led to them.

The FBI now has cell phone records showing that in the days prior to the attack on the Capitol a member of the Proud Boys was in contact with (at least) one person in Trump's inner circle. Cell phone records may also provide information about whether any Republican members of Congress, as has been rumored, were actually coordinating with the insurrectionists.

At least six Republican elected officials participated in the assault on the Capitol.

Dozens of Capitol police are being investigated for their actions during the Jan. 6 attack.

The "Big Lie" that drove people to storm the Capitol — about the 2020 election being "stolen" from Trump and the Republicans — was facilitated by right-wing fundraising groups and financiers.

Trump appointees at the highest levels, including acting Secretary of Defense Christopher Miller and Secretary of the Army Ryan McCarthy, appear to have prevented the National Guard from intervening in a timely and effective manner to stop the attack on the Capitol.

Academic researchers, data journalists and other experts on domestic terrorism have shown that a great number of the insurrectionists, contrary to stereotypes that hold otherwise, came from middle-class backgrounds, and that the vast majority of the insurrectionists were not members of white right-wing terrorist or militia groups. We also know that it was not an all-male event: White women played a highly influential role in planning, participating in and coordinating the attack on the Capitol.

Terrorism and and other experts have completed new research showing that a disparate collection of right-wing extremist groups participated in the Capitol assault. Military veterans were overrepresented among those who stormed the Capitol, and attackers came from all across the United States, not just from so-called red states.

In a just society, Donald Trump, his fellow coup plotters, and their various foot soldiers and accomplices would be arrested, tried, convicted and then imprisoned.

The National Association of Colored People (NAACP), one of the United States' oldest and most distinguished civil rights organizations is now doing its part to help ensure that justice is served for the horrific events of Jan. 6th. On Feb.16, the NAACP filed suit against Donald Trump and several of his confederates. Common Dreams, in an article republished by Salon, offers these details:

The suit — filed by the civil rights group and the law firm of Cohen Milstein Sellers & Toll in the U.S. District Court for the District of Columbia — accuses Trump, Giuliani, the Proud Boys, and Oath Keepers of directly violating the Enforcement Act of 1871 by attempting to prevent Congress from performing its official duties on January 6.

In my recent conversation with NAACP president and CEO Derrick Johnson, he explained why this new lawsuit was necessary to help protect America's multiracial democracy, and how it fits into a broader effort to confront the country's centuries-long history of white supremacist terrorism against nonwhite people.

Johnson also reflected on Black Americans' decision to defend the country's democracy by forcing it to live up to the promise of the Constitution. He argues that Trump's presidency and white right-wing terrorism in general are a byproduct function of the way white Americans were enraged by Barack Obama's presidency and his success as a Black person and an American leader.

How are you feeling given this moment of great promise and peril? Biden is president, but Donald Trump and his right-wing insurgency are still menacing the country. There is a plague, but Biden and the Democrats are making progress even as the Republicans are trying to stop him — and in doing so, causing great harm to the American people.

We as a country are at an inflection point, where we are going to have to decide whether or not we as a people are going to have a more inclusive society or are instead going to stagnate by being stuck in the past. This inflection point in the country's history requires us to work hard. We cannot have a democracy and white supremacy. The two things simply cannot coexist at the same time in this country in this moment.

Social media is a type of superspreader for many problems. There are no guardrails there. Those platforms are being used to spread misinformation and create a type of parallel universe that can hurt people. We have seen how social media has hurt American democracy during these last four years and Trump's presidency.

What does accountability and responsibility look like for the Trump regime's apparent crimes and the events of Jan. 6?

We have to cut the head off the serpent of white supremacy. We should hold the insurrectionists accountable as if they were al-Qaida or Osama bin Laden coming to America and causing havoc. We as a country mobilized and were willing to sacrifice our troops in an effort to defeat international terrorism. We have to do the same thing here with the insurrectionists.

Joe Biden has been president less than two months. Yet there is all this pressure from the mainstream news media, and too many rank-and-file Americans, to just throw the evil events of the Trump regime down some type of memory hole. This is what historians call "organized forgetting." Why have so many people, especially too many of our white brothers and sisters, succumbed to these fantasies? America remains in a dire political, social and economic crisis.

People want to live as though it was the 1950s, and as if that was some type of perfect time in American history. That era was one that was literally whitewashed and not inclusive of the many different communities, Black folks and others, who constitute America. Domestic terrorism has the face of a white male. Those white males must be held accountable. In America, unfortunately, we throw young black men away in prison and jails for committing much less serious crimes. We cannot have a democracy if we are not honest about what is truly taking place in this country.

There are two images which resonate with me. We saw the image of a Black woman with her child standing in line to vote. She and her child were basically inside of a plastic bubble while standing in a long line to vote — under threat of the pandemic and right-wing terrorism and of course Republican efforts to stop Black and brown people from voting against Trump. The other image was of a black Capitol police officer who saved Mitt Romney's life and those of other congresspeople as well. That brave Black man outsmarted a right-wing hate mob which was determined to engage in acts of violence, terrorism and death. What did you see in those images?

Those two images represent hope and courage. That woman standing in line, risking her health, enduring unnecessary long lines with child in arm, represents the hope that their ballot and their vote for this country's democracy could make a difference for their child's future. Courage was that black Capitol police officer standing up in the face of the insurrectionists who were calling him all types of horrible names. That officer stood up and confronted the insurrectionists attacking the Capitol. He did not run away. Instead, he outwitted them and outsmarted them.

Black folks keep saving American democracy over and over again. When are we going to have that love reciprocated?

For African Americans, this is the only country we know. The United States has become so powerful because of our many investments in this country, which includes forcing it to live up to the promise of the Constitution. Because of our investment as Black people, it is my drive and hope that we see ourselves as owners of the United States government and not victims of it and, as a result of that, work as diligently and as hard as possible so that this government, our country, reciprocates to fulfill our needs and interests. This is not from the posture of being powerless, but instead from the posture of being owners.

The United States has never had a proper reckoning about its history. That denial empowered the evil of Trumpism and his movement. When I saw the insurrectionists attacking the Capitol and waving Confederate flags, carrying their version of "Christian" crosses, and in many cases attacking Black and brown police officers, I saw a 21st-century lynch mob. The attack on the Capitol was an act of racial terrorism. Looking at the rage in those white men's and women's eyes, I saw lynchers. I said to myself, "My God, they are channeling their ancestors who hung us from trees."

The fallacy of white supremacy is that their skin privilege somehow endowed them with skills that they simply did not have. They had nobody else to blame for their lack and nowhere else to turn to explain their inability to function. Many of those white individuals have been and continue to be easily manipulated by rich elites and corporations. That is an old story in America.

In my discussions with the Biden administration, I have explained how there needs to be a Cabinet-level position which advises on how every policy impacts these questions of racial equality. Ultimately, there is no one program or one initiative to satisfy the question of racial equity, because such a large issue is present across public policy. Moreover, these questions of racial equity and justice are intergenerational. We see that in terms of the wealth and income racial gap for example. Such harms were caused by the United States government and need to be remedied as such.

The NAACP is using the Ku Klux Klan Act in an effort to ensure that there are accountability and consequences for the attack on the Capitol and Trump's coup more broadly. What are the details?

The Ku Klux Klan Act of 1871 was enacted against the backdrop of the Civil War. Southern congresspersons were working to reunify the country. They were facing increasing threats from white mobs and other violent groups, such as the KKK. Many of these white people were former Confederate soldiers who had committed treason against the United States.

The Ku Klux Klan act was passed so that if any individual or organized groups seek to intimidate or harm a member of Congress they would be suitably punished. That is the basis of our lawsuit.

The NAACP filed this lawsuit representing Congressman Bennie Thompson, who is the chair of the Homeland Security Committee. There may be other members of Congress joining the lawsuit.

Our goal with the lawsuit is to do all that we can to hold the insurrectionists accountable. We look forward to the Justice Department or another jurisdiction bringing criminal charges against those who participated in the events of Jan. 6.

If you were to play "doctor of democracy," what does America's prognosis look like to you in this moment?

The patient's condition is serious but not yet critical. The prognosis is positive. We are witnessing this fight against American democracy because of the success we have had expanding it. I tell people that if we were not moving in the right direction, there would not be so many people fighting so very hard to stop the progress. The status quo is moving in a different direction and there is a great deal of fear of that fact.