Republicans have a dream: The end of democracy and the return of Jim Crow

Republicans can't win elections without a crackdown on voting. But their real vision is about rolling back history 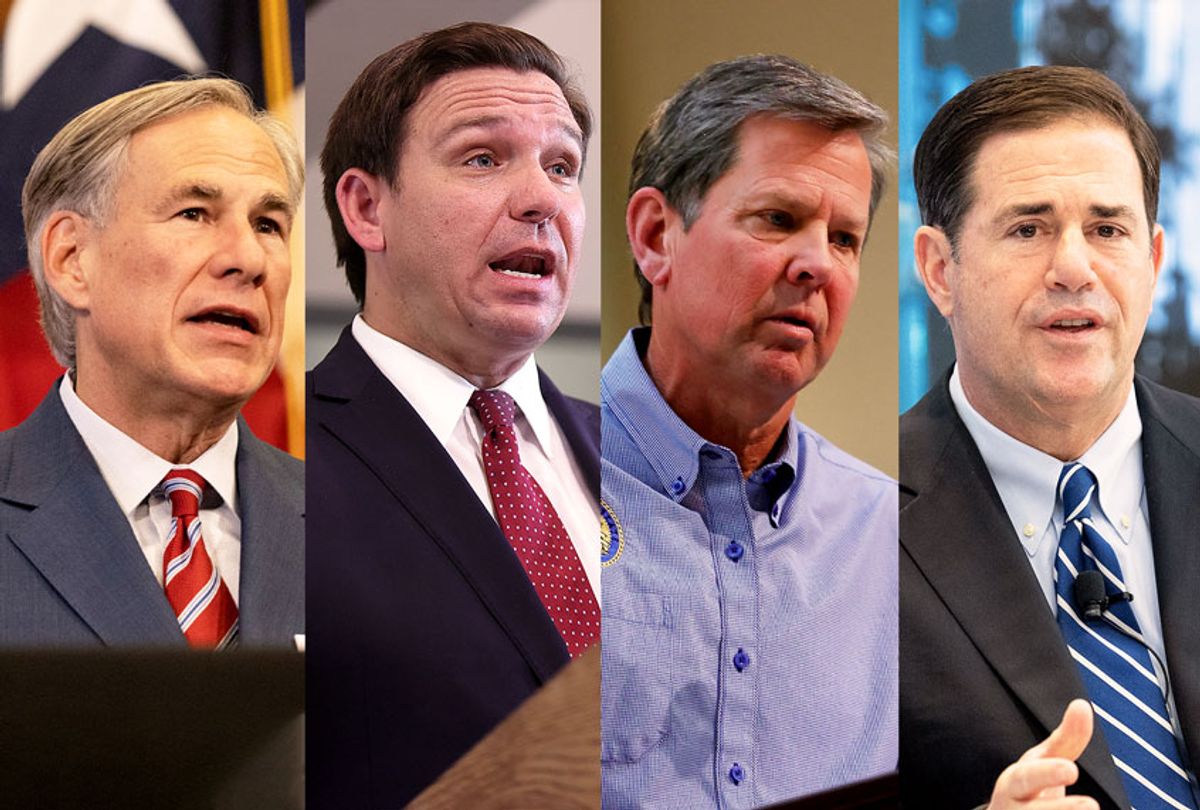 In Georgia and 46 other states across the country, the Republican Party is trying to keep Black and brown people and other members of the Democratic Party's base from voting. The goal is to keep the Republican Party in power indefinitely through a pseudo-democratic system political scientists call "competitive authoritarianism."

In essence, today's Republicans want to turn back history's clock to the Jim Crow era.

The smokescreen for this assault on American democracy is that such anti-democracy efforts are intended to "protect" the "security" of votes against the threat of "voter fraud," "manipulation" and "corruption" by unseen (and of course nonexistent) forces.

But the smokescreen is transparent.

On Tuesday, Georgia Gov. Brian Kemp admitted the truth about the Republican plot against democracy, telling WABE radio, "A lot of this bill is dealing with the mechanics of the election. It has nothing to do with potential fraud or not."

Kemp's statement echoes other public admissions by prominent Republicans and members of the white right: They that know they cannot win competitive elections in a real democracy because their policies and proposals are broadly unpopular with the American people. This is especially true given the country's changing racial demographics, and the fact that the Republican Party's core appeal is almost exclusively based on white identity politics, racism, and white supremacy. Donald Trump's neofascist presidency only accelerated that dynamic.

Former labor secretary and political columnist Robert Reich recently wrote that while "Trump isn't single-handedly responsible" for the Republican turn toward overt racism, "he demonstrated to the GOP the political potency of bigotry, and the GOP has taken him up on it. This transformation in one of America's two eminent political parties has shocking implications, not just for the future of American democracy but for the future of democracy everywhere."

There has been much excellent writing on the legal, legislative and procedural details of the Republican Party's war on Black and brown voters and American democracy.

We know now that the Jim Crow Republicans are attempting to pass at least 350 bills and initiatives that will make mail-in and absentee voting much more difficult, narrow the window of time to vote, remove polling places in predominantly Black, brown and poor communities, add onerous ID requirements and sabotage many voter mobilization efforts, especially those used by Black churches and other community organizations.

These anti-democracy laws also literally allow Republicans to rig the outcome of elections in their favor by expanding their control of local voting boards.

In total, these are de jure examples — written in the law — of how Republicans and the white right are trying to overturn America's multiracial democracy with the goal of creating a new American apartheid state across the South and elsewhere.

But much less has been written about how these Jim Crow Republican attacks are also a de facto assault on the day-to-day lives, dignity, freedom, safety and humanity of Black and brown Americans. The long arc of the Black freedom struggle is one where the de jure realities of institutional racism and white supremacy cannot be properly separated from quotidian social inequality and injustice. These new attempts by Republicans and the white right to undermine America's multiracial democracy are an open declaration that American democracy is to be first and foremost a White democracy. The Jim Crow Republicans' plot against the rights of Black and brown people is also an attempt to make civic life and representative politics a "whites only" space. Because the Republicans and their allies are literally rewriting the rules of democracy in their favor they stand a good chance of succeeding, at least for now.

White supremacy, on a fundamental and basic level, is a declaration that white people can act however they wish toward nonwhite people, up to and including maximal cruelty and violence, without consequences. Why? Because whiteness constructs white people as dominant over other groups by definition. This is the logic of Trumpism and other forms of racial authoritarianism that the post-civil rights era Republican Party has so enthusiastically embraced.

The Jim Crow Republicans have enshrined this principle into law: The Georgia anti-democracy bill makes it illegal to give people waiting in line to vote food or water. President Biden has described such laws as "un-American" and an "atrocity," and other prominent voices have condemned it as well. But these critics are dancing around a more basic and fundamental truth about what is being communicated by the Jim Crow Republicans and their allies.

The real truth and connotative meaning of the Jim Crow Republicans' ban on giving food and water to voters who are waiting in line is that Black and brown people are not quite human — the Other, not worthy of the same respect and decency as "real Americans," understood to be white by default. If the Republicans and other members of the white right who write these anti-democracy bills were being fully honest, they would simply state, "Do not feed the animals."

To properly understand the breadth of the Republican Party and its forces' attack on multiracial democracy one must locate such efforts as part of a larger right-wing campaign to dehumanize Black people and other nonwhites. By implication, votes by such dehumanized people are deemed to be illegitimate and therefore not allowed.

So we reach a teachable moment: What is white privilege? It is understanding that one's basic humanity — as a member of a group of people deemed to be "white" in America — will not be challenged. As we see with the Republican Party's war on multiracial democracy that freedom is by definition denied to Black and brown people in the United States.

In his sweeping and essential book "Trouble in Mind" the historian Leon Litwack described the informal rules and resulting dehumanization of black people during the earlier Jim Crow regime this way:

The indignities visited on black youths were meant to impress on a new generation the solidity of racial lines and the unchallengeable authority and superiority of the dominant race. … Young blacks underwent the rites of racial passage in a variety of ways. But the specter and threat of physical violence — "the white death" — loomed over nearly every encounter. If they themselves were not the victims, the violence fell on members of the family, friends, and neighbors, almost always with the same intent — to remind black men and women of their "place," to impose severe restraints on their ambitions, and to punish any perceived signs of "impudence," "impertinence," or independence."

With their nationwide crusade to reinstate de jure Jim Crow laws across the United States, the Republicans and their allies are also summoning these old, ugly day-to-day white supremacist cultural norms and rules.

Jim Crow was a form of terrorism, so widespread that millions of Black people (who could accurately be described as internal refugees) fled the South during two great migrations. Jim Crow involved informal rules: Black people could not make eye contact with white people, as that was "disrespectful." Black people were expected to step off the sidewalk and into the street to let white people pass. Black people could not protest or otherwise resist if they were not paid for work they had completed on their jobs. Black and brown adults were to be treated like children and addressed as "boy" or "girl", "auntie" or "uncle". Black adults were also expected to be deferential to white children. Regardless of their income, Black people should not have nicer clothes, cars, homes or personal property than white people. At four-way intersections, a black driver was expected to let white drivers go first.

These social rules were enforced by violence — and all too often by death.

The informal codes and rules of Jim Crow life were in many ways defeated by the Black freedom struggle in the 20th century. But as documented repeatedly by social scientists and other experts, the logic and expectation of Black people's deference to white people and white authority still remains. These are the expectations that fueled the Tea Party, the rise of Trump and other recent manifestations of fake right-wing populism in the United States. This is the expectation that drives the Republican Party's ongoing attacks on multiracial democracy in Georgia and across the country. These expectations of white power were also at the heart of Donald Trump's attempted coup, the Capitol attack and the broader right-wing terrorist movement.

Will America move forward as a prosperous and free multiracial democracy or will it instead jettison that project and be pushed backward into a white supremacist pseudo-democracy. These are the stakes. We face a battle for the soul of America.