Republicans come ever closer to embracing overt white supremacy. At least that would be honest 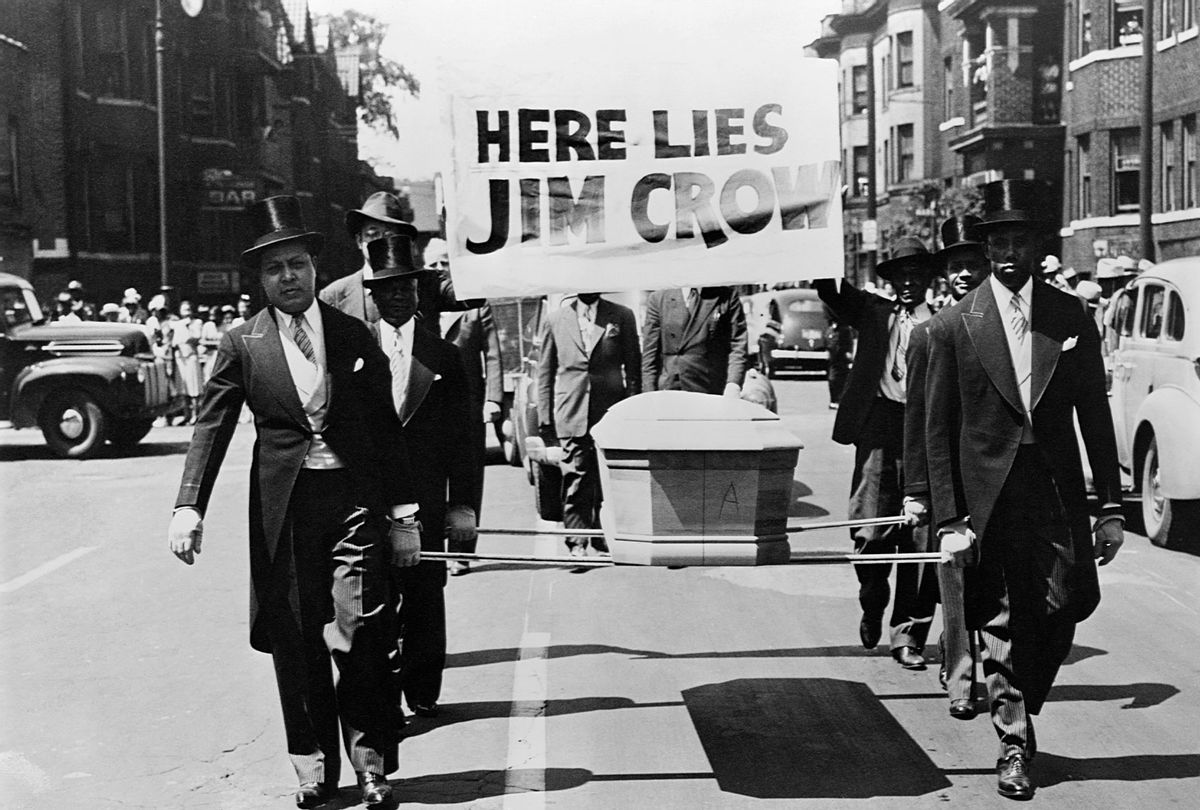 African-American men wearing tuxedos carry a coffin and a "Here Lies Jim Crow" sign down the middle of a street as a demonstration against "Jim Crow" segregation laws. 1944. (CORBIS/Corbis via Getty Images)
--

It is the year 2021. But Republicans and the right-wing movement are trying to pull the American people back to the past.

Their ultimate destination? It could be Jim Crow white supremacist America of the 1950s. It could be the end of Reconstruction in 1876 – or even a time before that.

In that sense, the Republican Party and its allies and followers are time-breakers, not content with harmless nostalgia and happy-pill lies about the past. Their goal? To radically remake society in their own grotesque vision where white, right-wing "Christians" — men, by definition — rule America unopposed and for all time.

Such a world would be a utopia for them and a dystopia for everyone else.

On Monday, philosopher Jason Stanley described America on the precipice of such as horrible moment in a Twitter post:

I find it chilling this odd moment of calm while Dems are in power and state after state is introducing bills that, if passed, will ensure permanent minority party rule and the end of US democracy. We have so little time. Watching history unfold.

Because they cannot win a war of ideas and their policies are wildly unpopular with the American people, Republicans and their allies are attempting to restrict the right to vote all over the country.

Zachary Roth of the Brennan Center for Justice describes this racialized "legislative anti-democracy" and what it entails:

It's upon us: a wave of legislation, in states across the country, aimed at making voting harder. The Brennan Center has tallied over 250 bills in 43 states this year that would restrict access to the ballot. Many would reverse the expansion of vote by mail, which helped lead to the soaring turnout of 2020, or would tighten ID requirements.

But the latest assault on voting shouldn't be seen in isolation. Some of the same Republican state lawmakers behind these measures are also taking steps to suppress any form of democracy that threatens them — afraid, it seems, that the more say voters have in any form, the worse their side will fare. …

It's hard to ignore that this explosion of what we might call "legislative anti-democracy" is coming from some of the same people who helped stoke an even more troubling effort to overturn the will of the people. At least 14 Republican state lawmakers attended the January 6 "Stop the Steal" rally that led to the Capitol insurrection, and they continue to serve. At least one, State Sen. Doug Mastriano of Pennsylvania, has been a leader in his state's effort to pass restrictive voting laws.

These attacks are targeting those Americans at the base of the Democratic Party: young people, the poor and working-class, college students, urban residents and nonwhite people.

Black Americans (especially black women) are arguably the most important members of the Democratic Party's winning coalition. As such, Black Americans have become the near-obsessive focus of the Republican Party and the white right's efforts to overturn multiracial democracy.

These attacks on Black people's freedom and their human and civil rights — which were won in blood — involves dreams of a return to the Jim Crow era of "separate but equal," with literacy tests, poll taxes, felon disenfranchisement, gerrymandering, terrorism and armed intimidation, threats of imprisonment and arbitrary movement of polling places, all designed to make it harder for Black (and brown) people to vote.

Moreover, these Jim Crow dreams are not private; they are very public.

Texas Gov. Greg Abbott, a Republican, invoked the white supremacist film "Birth of a Nation" and its hateful depictions of Black people when he told Fox News last weekend that the Democrats use cocaine to buy votes.

Last Wednesday, Arizona State Rep. John Kavanaugh, also a Republican, channeled the exact logic used by Southern and other white politicians during Jim Crow to justify not allowing people to vote. He literally said, "Everyone should not be voting" and that he and his fellow Republicans care about "the quality" of the votes.

White Republican voters largely agree with these efforts to stop Black and brown Americans from voting, along with other groups who generally support Democrats. Republican voters overwhelmingly believe in the "Big Lie" that the 2020 election was stolen from Donald Trump and that therefore America needs more "election security," i.e., ways to keep "those people" from voting. A significant percentage of Republicans also believe that Trump's coup attempt and the Capitol attack were justified. Public opinion and other research show that Trump-supporting Republicans are willing to give up democracy in order to maintain white supremacy as the dominant and most powerful group in the country. Other research shows that a majority of Republicans are willing to go to extreme measures, including violence, to protect America's "traditional way of life."

In total, today's Republican Party and right-wing movement are not "conservative": They are destructive, revanchist and reactionary.

The Republican retreat from the present and embrace of some of the worst aspects of the country's past is oriented along the color line. The centuries-long struggles of Black and brown people, alongside their white allies, has gradually forced America to be a more full and equal democracy for all people. When Republicans and other "conservatives" attack American democracy, they are attacking that legacy.

The Republican Party's symbol is the wise and patient elephant. From the backlash to the civil rights movement in the 1960s to the Age of Trump and beyond, Republican have now fully embraced white supremacy as one of its central values and beliefs. To better reflect those values, today's Republican Party should replace the elephant with an image of the real "Jim Crow," a 19th-century white minstrel performer named Thomas Dartmouth Rice whose racist buffoon act was modeled on a debased version of a black slave. One of Rice's most popular songs was "Jump Jim Crow." Because he was so successful his "Jim Crow" persona was adopted by other white race minstrels.

In many ways, Rice's Jim Crow performance still has life in the 21st century, when our nation's most important white supremacist organization pretends not to be racist. If Republicans reclaimed Rice's legacy openly, at least they would be honest.